The Stratocaster is one of the longest-produced guitars in history and remains to be one of the most versatile and sought-after guitars on the market today.

The problem with Strats is singular: the price. While some of us may be able to dish out several months’ paychecks on an instrument (who needs to eat, anyway?), it just isn’t practical for everyone, and with prices ranging from $600 to several thousand dollars, depending on the year and model, a nice Stratocaster can be extraordinarily elusive.

The Squier Strat (no, not a squire stratocaster guitar, this isn’t the Medieval times) comes in a variety of models: different fingerboard wood, with or without the tremolo bar, different pickup types, and so on. But this review will be on the Squier Bullet Stratocaster with Tremolo bar. 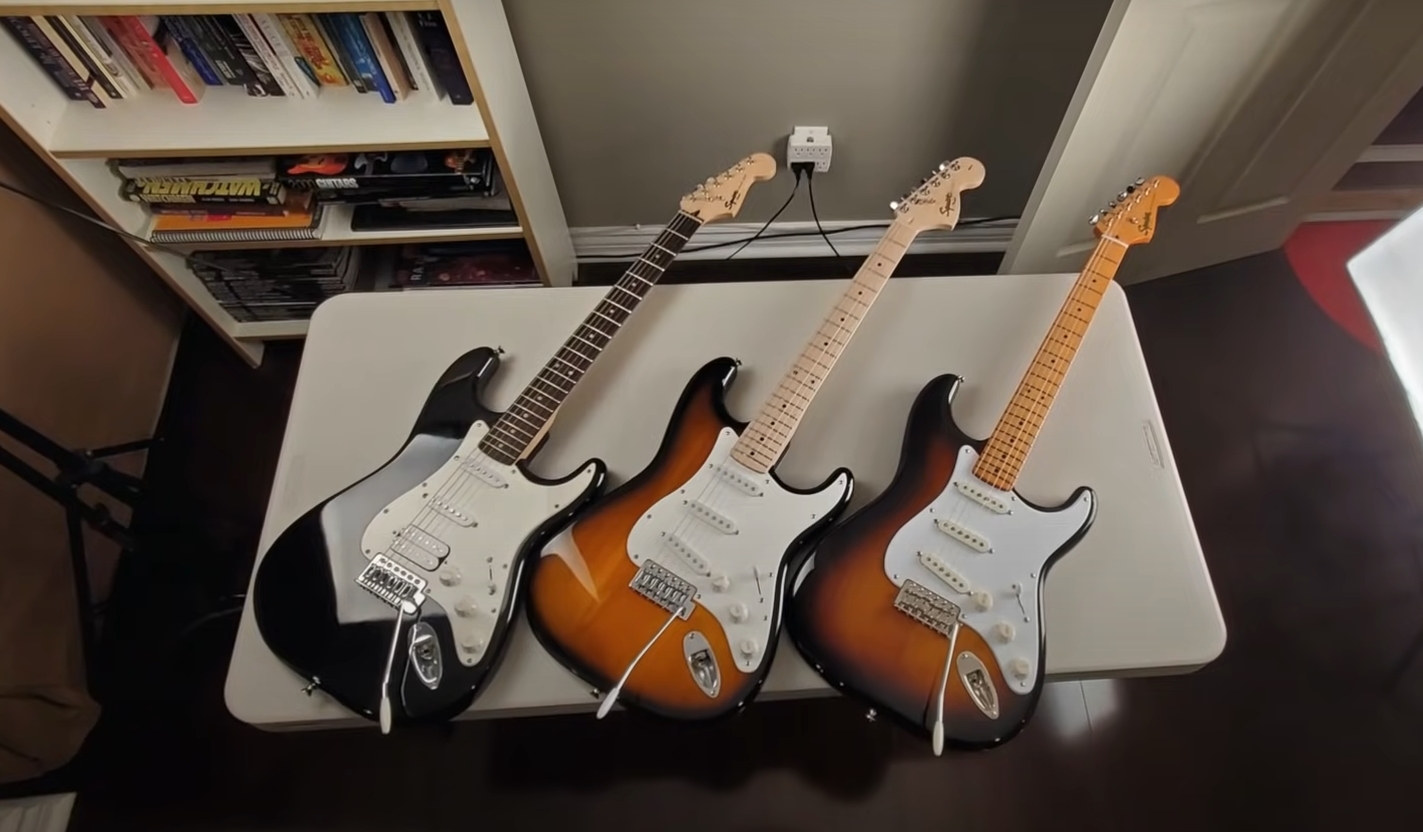 Check Guitar Center Price Check Amazon Price
We earn a commission if you click this link and make a purchase at no additional cost to you.

The first question I always get when discussing Squier as a cheaper alternative to Fender is: “Well, is it the same as Fender?” The answer to this question is: NO… but, well, kind of.

Back in the ‘60s, Fender bought V.C. Squier, which at the time was primarily a string manufacturer for violins, guitars, and banjos. Founded in the late 1800s by Victor Carrol Squier in Michigan, it’s remarkable that the company remained independent until 1965—the big year when Fender purchased Squier.

The string manufacturing continued, but under the name of Fender, which meant the Squier name became buried in history as a bygone brand… that is, until 1982, when “Squier by Fender” produced its first guitar: the Squier JV, or “Japanese Vintage”.

Ever since, Squier has been the more affordable cousin of Fender guitars, being produced in China, Indonesia, India, Korea, Mexico, and Japan with cheaper materials and lower labor costs. Because Squier is owned by Fender, it is allowed to produce the Fender trademarked guitar styles—the Stratocaster and Telecaster, for example—but the cheaper versions of them.

To sum up: Squier is owned by Fender and is licensed to produce more affordable versions of virtually the same guitars.

New Price on GuitarCenter Used Availability on Reverb
We may receive compensation from the companies whose products we review. We only recommend products that we believe in and test.

So… how does it sound?

While I absolutely make no claims that the Squier Bullet Strat sounds identical to Fender Stratocasters, it does still sound great.

The most fundamental difference between the guitars—the choice of tonewood—is the primary component to thank for the decrease in both price and tone. Squiers typically use a basswood body, which we discussed earlier. In contrast, Fender Strat bodies are usually made of ash
and alder.

Ash typically delivers more brightness on higher frequencies, while alder provides a deeper low-end. Comparatively, basswood may sound a bit blurred-out across the frequencies, with less acuteness in the tone production.

That said, basswood is nonetheless a reputable wood for electric guitars and has been used not only on budget guitars, but by high-end guitar manufacturers as well.

In the neck department, the Squier Bullet’s maple-rosewood combo is basically the same as the Fender neck, and there’s no noticeable sound difference. Where the difference lies is not in the choice of tonewood, rather in the amount of detailed attention paid to quality control during the manufacturing process.

Fender necks will be pristine and flawless basically every time. Squier necks might have some imperfect frets, off-kilter inlays, or a sub-par finish job. But the wood is the same and should deliver comparable tone.

Also, it should be noted that Squier tuners aren’t quite as reliable as the Fender ones. When jumping on the Squier boat, replacing the tuners with some higher-quality ones will be a quick and cheap upgrade that you’ll thank yourself for later.

Where to Buy the Squier Bullet Strat

There are a few places I’d check for inventory. In order of priority:

0% Interest for 48 Months* on select brand purchases of $499 or more with 48 equal monthly payments required.

Prequalify Now
We earn a commission if you click this link and make a purchase at no additional cost to you.

The Squier Bullet Stratocaster is not identical to the Fender Strat. But, it’s pretty damn close. And for the affordable price of $150, what’s not to like?

Bottom Line: I give it a 4.5 out of 5 stars (in the budget guitar department).

The body of the Squier is a little bit softer and lighter than the Fender, and the finish job will be less pristine. The hardware is slightly lower quality, but replacing the tuners and pots at some point is a small price to pay when you’re already saving hundreds of dollars.

Tone-wise, the Squier is a tad bit less rich than the Fender and displays less tonal complexity, but it’s not by a huge margin. Throw on some good distortion or modulation effects and the difference will be even less noticeable.

Over the years since Squier was acquired by Fender, there have been some huge improvements in the quality of budget guitars, and the line between cheaper high-end instruments and high-end budget instruments is getting blurrier every day.

The main difficulty to overcome with the purchase of a Squier is… gulp… your pride. Everybody wants to be seen with Fender written in classic, gorgeous calligraphy across their headstock. It’s an image thing (read a companion review of the Fender Strat).

But just remember: when you’re shredding and the crowd is going wild, nobody is going to pay any attention to the fact that you’re playing a Squier instead of a Fender. Consider swallowing your pride and trying out a Squier Bullet Strat. For the price, it absolutely cannot be beat.

New Price on GuitarCenter Used Availability on Reverb
We may receive compensation from the companies whose products we review. We only recommend products that we believe in and test.

This is the 2nd article from you guys that I’ve read. The 2nd is as dumb as the first.

Hey, most bullet strata now have a Indian Laurel fretboard instead of rosewood.