Of the hundreds of variations on the Fender Strat, the Standard has been a popular gateway guitar for those who want something better than the Eastern-made Squiers, but who aren’t quite ready for an American model.

In an increasingly competitive market, even the Standard Stratocaster doesn’t really have an absolute standard. While they’ve always offered a range of finishes, and the option of a rosewood or maple fingerboard, recent years have offered variations on the pickup configuration.

In the interest of keeping things as straightforward as possible, we’ll review the classic configuration of three single coil pickups. 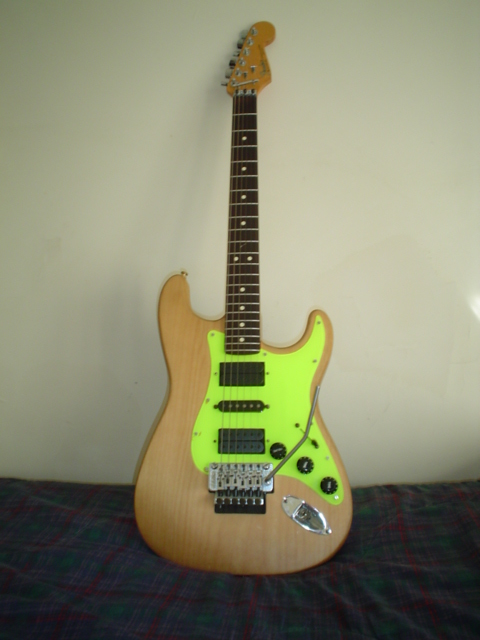 It seems weird highlighting the core features and specs of a Strat – more often when I review guitars, these are the things I compare others with! The specs can only be described as standard for a Strat, which seems an odd thing to specify here.

The review model comes with a rosewood fingerboard. It’s difficult to highlight anything exceptional about the guitar. Even on the listing on Fender’s website, the highlights are based on the fact that it’s a Fender Strat.

Intermediate players taking the step up from instruments, who are chasing the classic Stratocaster tone.

Players looking at guitars in this price range are most likely to have been playing for a little bit, learned the basics and got a feel for electric guitars from a cheaper model. They’ll either have a specific player in mind whose tones they’re trying to emulate – Hendrix, Clapton, Jeff Beck – or they’re looking to get as wide a range of tones as possible from a single instrument.

The Standard is also a popular choice for more seasoned players on a budget, who would upgrade the pickups.

The tonewood used in the Standard is something Fender have played with and changed throughout the years, but an alder body – as in the current model – is a recurring feature. It’s a contributing factor to the shimmering, bright sound, synonymous with the Strat.

This guitar comes with a bolt-on maple neck, topped with a rosewood fingerboard. There’s no fancy binding on this neck, and the medium-jumbo frets match the chrome hardware seen over the guitar.

Everything on it is Fender’s stock parts. And why would they not be? When the Strat first came out in 1954, it was the peak of innovation for the development of the electric guitar. The innovations required creation, so it would be pretty poor form not to stand by that legacy.

In saying that, they continue to push the innovation of their parts, highlighting the smooth-finished, C-neck profile as an example.

All in, the Strat weighs just over 8 lbs. It’s a comfortable weight, certainly aided by the slim design.

It’s easy to get snobbish about instruments carrying the Fender name that aren’t made in the USA, and frown upon the Mexican counterpart. Yes, it’s a cheaper guitar by a few hundred dollars. But if there’s going to be complaints about quality, it won’t be because of its construction.

The Standard’s neck joint is clean and flush, with no gaping holes, signs of pressure, or unsightly glue marks. The frets and dot inlays are perfectly embedded in the fingerboard.

Fender’s floating tremolo is there, present and correct. Players tend to have a love/hate relationship with that, but part of their ongoing innovation efforts is to reduce the tuning issues that can occur from using it.

The machine heads adorning the topside of the headstock look pretty solidly attached. It’s unlikely they’ll match Grovers or Gotohs, but they look like they hold tune for a couple of songs.

It’s hard to say that much more about the parts and construction. They’re all very standard, but that’s the whole point. It’s a Stratocaster, built like a Stratocaster, by its creators. Let’s move on to its tones. 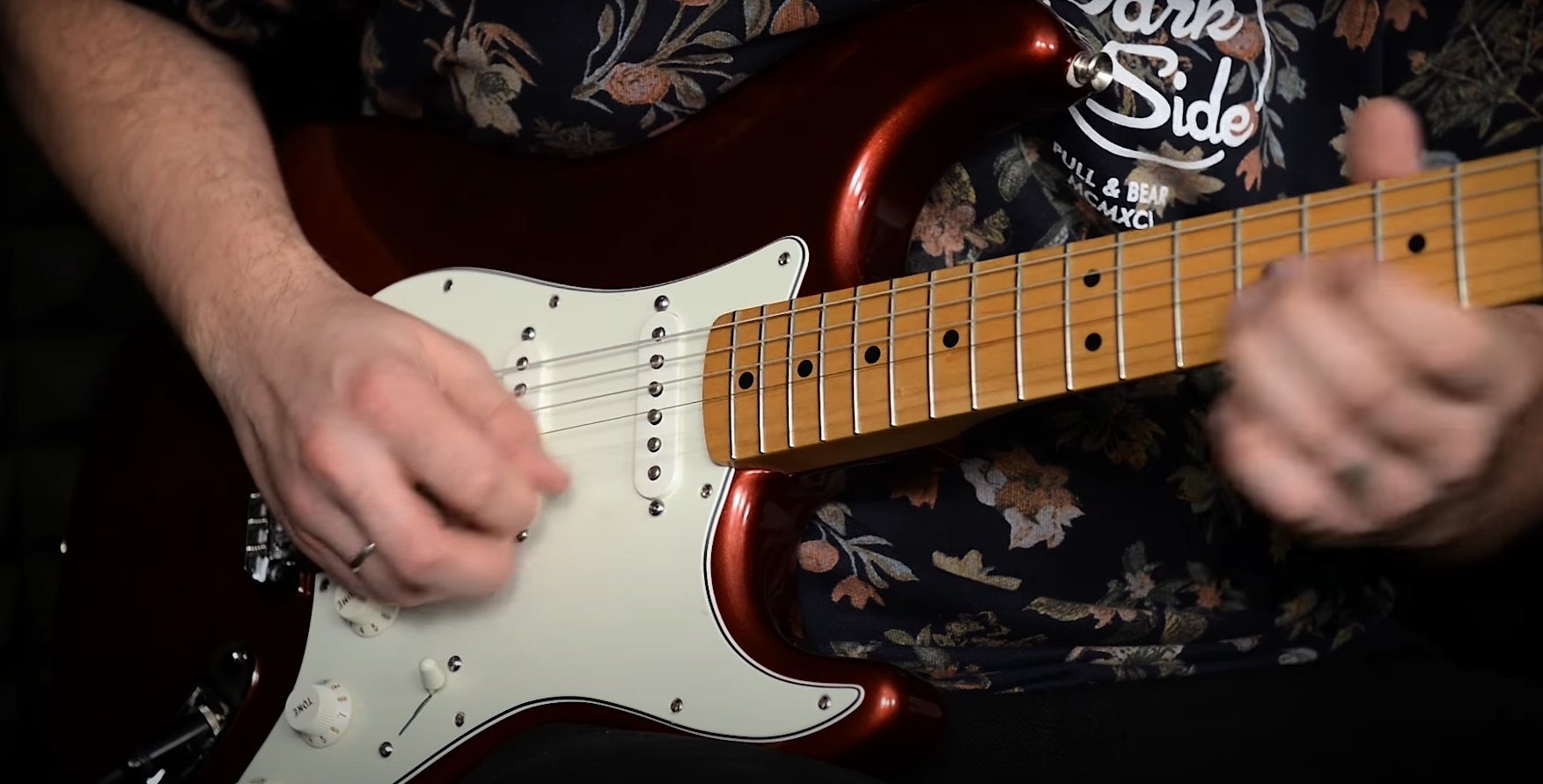 I always find it important to consider the intended player when choosing which amp to use for reviews. In this case, the intermediate player is likely to want a decent amp, to get the most out of their decent guitar. A 50 watt, 2×12 hybrid combo was selected, and seemed about right for who’ll be playing this guitar.

A few unplugged strums gives us an idea of the bright sounds the alder will provide. Running through a few chords and licks, nothing stands out as worrying.

Plugging in and turning on to the amp’s clean channel, and the pickups are a little bit buzzier than I’d like. You can hear why some players will take the cheaper Fender but upgrade the pickups. Once you start playing, it’s pretty negligible.

I always find with any kind of single coil guitars, that the bridge pickup on a clean channel is just not nice for me. The Standard was no exception. It may not be “bad” per se, but to me, it’s just a bit sharp to be useful. Moving the selector switch up was a relief.

With the bridge and middle pickup, on a clean channel, you can get some funky chops and licks out. Looking to emulate Daft Punk, but don’t want to break the bank? This will get you in the ballpark. If you don’t have a wah pedal, too much time spent here will leave you looking for one.

Staying on the clean channel, the middle pickup, or middle and bridge pickup combination sounds like it would be useful in contemporary country music.

Moving over to the amp’s overdrive channel, and the middle pickup selection is definitely flavour of the week. With the gain set to six, the chords shimmer, and there’s still enough bite to squeal out a solo.

Moving the selector up further still, and you can do some thick, grungy, power chord riffs.

There’s quite a lot going on here!

For an intermediate player, there’s plenty to get stuck into, to continue furthering their playing. A lot of this is down to the range of tones that can be teased out of a Strat.

The action out of the box is a little higher than I’d prefer, but that’s a relatively easy fix. The neck feels smooth as my fretting hand goes up and down its length, but it’s difficult to say how much of this can be attributed to the contemporary finish that Fender claim.

The frets feel perfectly finished long the edge of the neck – there’s no sharpness or discomfort. The neck is a typically slim Fender affair – it feels just like a Strat neck should.

For the intermediate player who wants a highly playable instrument, as either a step up from their guitar or an alternative to a humbucking beastie.

The Strat is one of the most copied guitar body shapes in the world, so you don’t have to look very hard to find some alternatives to consider.

Electronics aside, you can guarantee that Fender use a higher quality of alder for more expensive guitars. Their American instruments will also be a little less mass-produced than Mexican models, so quality control will be greater.

It seems only fair to give a mention to the later efforts of the Strat’s creator. In 1982, Leo Fender created the S-500 at his G&L (link to website) company. The Tribute model in the current G&L catalogue does look incredibly familiar.

Unusually for a Strat-type guitar, its body is made of mahogany. It comes with a Dual-Fulcrum vibrato, which actually looks a lot sturdier than the floating trem on Fender’s own Strats. It comes equipped with MFD pickups, which gives more clarity to the top and bottom end of your sound, without losing any of the mids.

This guitar is recommended for intermediate players whose knowledge of tone has extended beyond the cheaper instrument they’ve been learning on.

The price puts it in the range of hobbyists, but it’s unlikely to cut it with professionals.

It’s for people who are developing a knowledge of the tonal nuances of different guitars, and gaining an understanding of how to achieve the tones they’re looking for, and that with guitars – like everything else – you get what you pay for.