If you are a musician who is looking to get their hands on an affordable semi-hollow body electric guitar that will give you the taste of playing on an authentic semi-hollow, the Epiphone Wildkat is the guitar you’re going to want to take a look at.

The Wildkat is perfect for Blues, Jazz, and Rock. If you’re more creative with your playing style, you could even try Country, Alternative rock, and may even get away with Country on this guitar.

As long as you’re not looking to blare tons and tons of sound, this guitar will suit you just fine.

If you’re worried about the reliability of this guitar, especially since it’s more of a budget guitar, keep in mind that the Wildkat is popular because it’s a great budget guitar.

Despite the price tag, Epiphone took their time and really made a guitar that’s going to withstand years of wear and tear.

There are a few flaws in the overall paint job if you’re really looking to pick apart the guitar, but again, this is a budget guitar.

With all of that said, let’s talk about the features that this guitar has to offer to you: 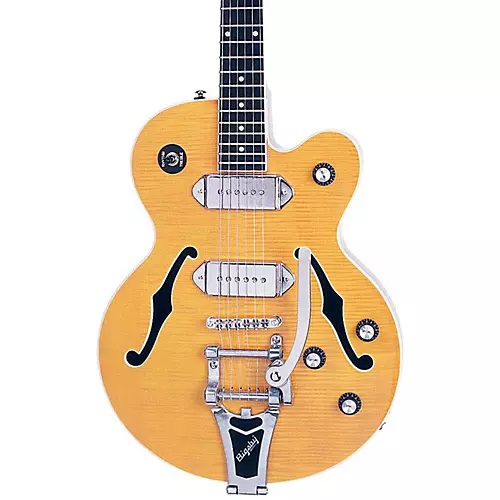 The WildKat Bigsby hollowbody electric guitar is a wild guitar with a lot to catch the fancy of all kinds of players: chrome Vibratone tailpiece for vintage detail, flamed maple top for gorgeous looks, and 2 Alnico V P-90s for hot-rodded tone.

Buy at Amazon Buy at Sweetwater
We earn a commission if you click this link and make a purchase at no additional cost to you.

When you take the first place at the Wildkat, you’re going to see a lot of different stuff on this guitar. There are two P90 pickups that provide this guitar with the sound that it’s famous for. Along with a three-way selector switch (toggle switch) that you can also find on a Les Paul. There are two volume controls for each of the single-coil pickups (one single coil pickup on the neck and one pickup on the bridge), a master tone control, and a master volume on the cutaway.

The body of the Wildkat is a single cutaway, which provides users with a great amount of access to top frets, especially for users who happen to have smaller hands. If you take a quick glance at the F holes on this guitar, you are going to find the block underneath of the bridge, but the rest of the guitar is hollow.

In comparison to the Epiphone ES 335, the body of the Wildkat is a bit thicker; the overall size of this guitar is just as big as a Gibson Les Paul, but a bit heavier than a Les Paul. 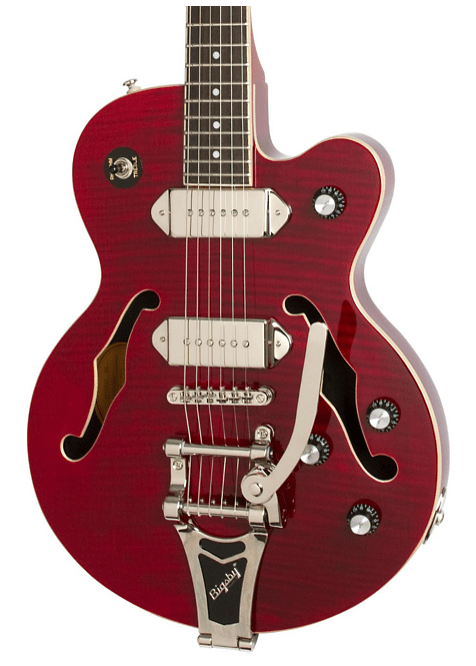 Epiphone’s Wildkat does not follow the traditional flow of a semi-hollow. Most semi-hollow body guitars have a center block of wood with a hollow body around the block of wood. However, Epiphone comprised the Wildkat with a piece of solid mahogany body that’s hollowed out.

The neck of this guitar is maple with a piece that has a modified Les Paul profile and a rosewood fretboard. If you’ve ever played with the Epiphone ES 335, the Wildkat definitely feels much smaller than the ES 335. Matter of fact, the Epiphone Wildkat is much more comparable in size to the Gibson Les Paul.

In the guitar community, there is a lot of talk about whether or not the Epiphone Wildkat is an ‘authentic’ semi-hollow body guitar. Personally, I would say that this answer would really all depend on what type of guitar you compare it to.

In order to fairly judge the ‘authenticity’ of the semi-hollow body from the Wildkat, you should really only compare this guitar in the price range that it was built for. Especially when considering how authentic the vintage sound that this instrument produces.

If we were to compare the Epiphone Wildkat to the Gretsch 5623, which is a guitar that has a similar build to sound to the Epiphone but isn’t comparable in a price range, the Wildkat comes across as a bad attempt at a knock-off.

At the end of the day, if you’re going to forgive the price difference between these two guitars and compare these instruments, Epiphone has a lot of catching up to do before it comes close to the Gretsch 5623.

Cosmetically, the biggest flaw that a decent amount of people, myself included, have noticed is that there is a bit of bleeding of black paint on the Bigsby tremolo. 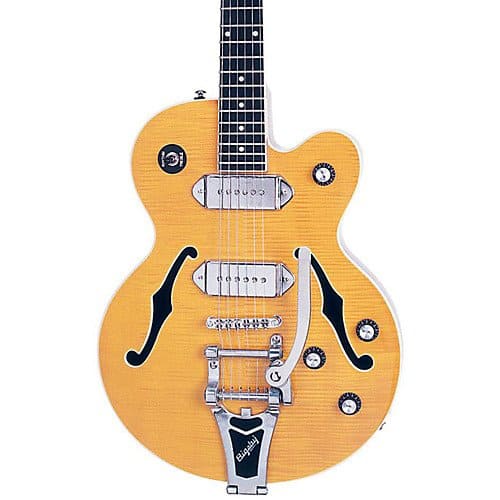 The factory finish that Epiphone set up this guitar is great to play with if you’re looking to start playing after pulling it out of the box. The action is set low, which is due in part to the fret scale and the semi-hollow body construction.

One thing that I thought was annoying about the Epiphone Wildkat sits in the mix of cosmetics and playability. The Epiphone badge that’s on the headstock didn’t sit even to the headstock facia, which caused rattling.

While this rattling didn’t come through the amplifier, it was still annoying to hear while I was trying to test the limits of the sound that the Wildkat could produce. I feel like this is something that Epiphone could easily fix at the factory to minimize some work that beginners may have to do to perfect the guitar.

I also didn’t like that the Wildkat didn’t come with a pickguard. However, this is both a pro and a con. If you’re a who is looking to just start out creating sound, you’re going to have to watch your technique right off the bat if you’re really looking to preserve the finish of your guitar. 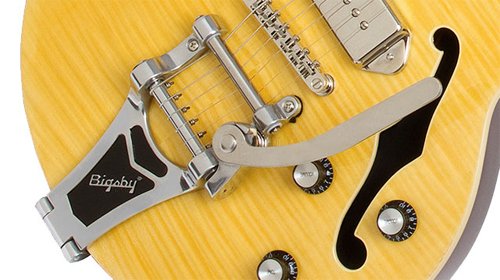 Combining a vintage tremolo bridge with a Bigsby stopbar tailpiece is something that can be extremely difficult to deal with. Especially on guitars that are high end and super expensive.

When Epiphone released their Wildkat with both a vintage tremolo bridge and a Bigsby tailpiece, a lot of people were shocked that a budget semi-hollow was released that included these two components.

However, if you are someone who has a bit of experience playing the guitar, you would be surprised that the combination of the tremolo bridge and the Bigsby tailpiece doesn’t really require a whole lot of patience to adjust.

This is a very simple and common set up but does serve practicality to this guitar. 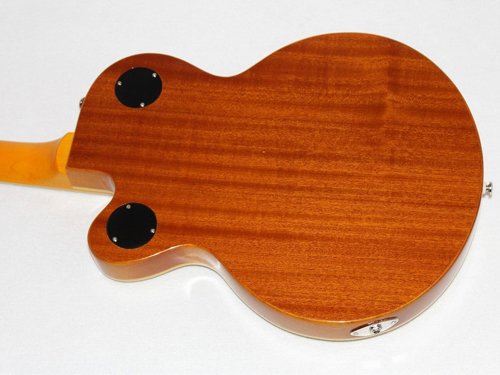 The two P90 pickups that are installed in the Wildkat make this guitar perfect for blues and rock, with the ability to dabble in the jazz genre. This guitar has incredible range, excellent projection, and a decent sustain.

While the Wildkat does not sound like a high-quality guitar that’s worth thousands of thousands of dollars, this instrument is a close second and is worth the considerably small investment for a quality semi-hollow body.

I found that when I switched up to the neck pickup, added a small amount of reverb, and a bit of overdrive, and I was able to create a hazy electric blues tone. However, flip over to the bridge pickup and there was a lot more bit but the overall tonal quality still hints at a Gibson-esque resonant sound, even though the guitar’s cosmetic appearance pays a few tips to Gretsch.

I really enjoyed the solid block of wood in the center of the guitar, because I found that it did an amazing job of preventing unwanted feedback, even when I was a little too heavy on my drive.

I found that when I was really heavy on my drive, I got the rowdiness sound that you find in rock and roll. When I pushed it a little further, I was able to dabble in some moderate metal before the feedback became too much to deal with.

If the Wildkat sounds like a great guitar for you, but you’re looking for something that’s just a bit different, here are a few other alternatives guitars to consider:

Gibson ES-335: This semi-hollow body guitar users 57 Classic and Super 57 Classic pickups, a ‘C’ neck profile, and the entire manufacturing process of this guitar is completed in the United States of America. The ES-335 from Gibson offers a semi-acoustic electric guitar tone with the high-quality hardware and electronic system that’s always associated with the Gibson name. 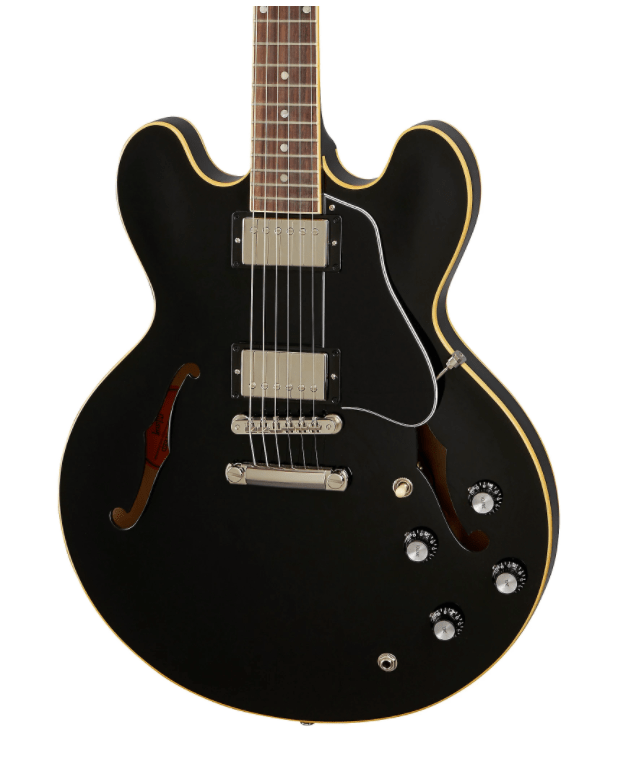 The Wildkat was introduced as a somewhat Gretsch-like Hollowbody, with two dog-eared P-90 pickups and a tremolo tailpiece.

Epiphone certainly changed the expectations in the market when it comes to semi-hollow body guitars. This by creating a semi-hollow body electric guitar with a low-price tag and a decent performance.

If you’re looking for a guitar that will grow with you as you expand across Blues, Jazz, and Rock music, the Epiphone Wildkat is going to a guitar that’s not going to be a disappointing investment.

However, I would highly recommend that you prepare to upgrade the factory strings with a heavier gauge string, while also replacing the tuning pegs on this instrument.

While replacing the tuning pegs aren’t necessary, they are going to help maintain consistent tuning on your instrument, which will make your life easier. I hope you enjoy your Wildkat adventures!

The WildKat Bigsby hollowbody electric guitar is a wild guitar with a lot to catch the fancy of all kinds of players: chrome Vibratone tailpiece for vintage detail, flamed maple top for gorgeous looks, and 2 Alnico V P-90s for hot-rodded tone.

Buy at Amazon Buy at Sweetwater
We earn a commission if you click this link and make a purchase at no additional cost to you.