The Epiphone Sheraton is inspired by the Gibson ES-335 and was designed after Gibson took over Epiphone in 1957.

Once Gibson bought out Epiphone, the two companies began manufacturing guitars side by side, in the same factory. Nowadays, Epiphone guitars are known for being great mid-priced guitars that share a lot of the same pickups that are installed on Gibson instruments.

The Epiphone Sheraton II is comparable to the ES-335, but there are still slight differences between the two models; the ‘ears’ of the guitar are larger on the Sheraton II than they are on the ES-335. 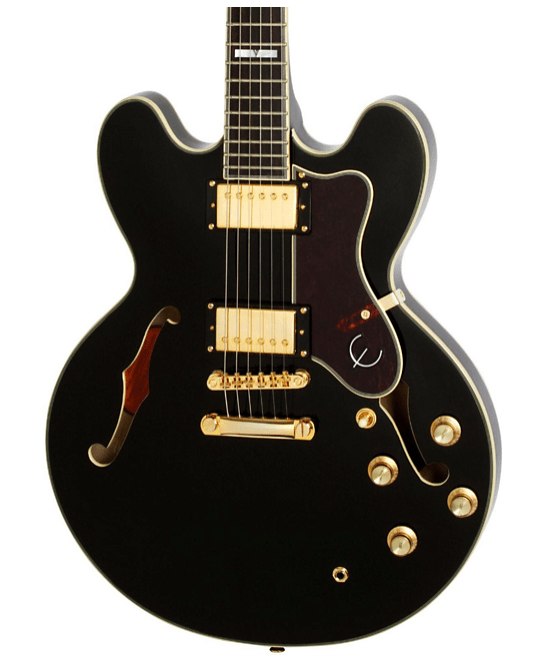 An Epiphone Icon: Hailed by blues legend John Lee Hooker as "an outdid 335," the Sheraton has been renown for decades for its combination of superior tone and beautiful pearloid and abalone inlay.

This solid body guitar is comprised of laminated maple and finished with a solid gloss black, with a maple neck attached to the body. The rosewood fingerboard is bound and is inlaid with Mother of Pearl and Abalone with an enlarged headstock. The enlarged headstock has an elaborate vine pattern which I think it a gorgeous detail to this guitar.

All of the hardware on this guitar is gold, including the Classic Plus Alnico humbuckers and the Grover rotomatic tuners.

The Sheraton II is currently available in Black, Vintage Sunburst, and Natural. You can also purchase a case with your Sheraton II, but it will cost extra.

Once I plugged in this guitar, I was surprised at the endless tone combinations that the Sheraton II offered. I was easily able to achieve Rock, Blues, Jazz, and was able to dabble a bit into Alternative through the robust tones that the humbuckers provided this instrument with.

I have to say that this instrument does produce a unique sound, which adds to the overall character of the Sheraton II. This unique voice becomes even clearer when you begin adjusting the volume controls and mixing with the pickups.

When I went and began to play around with the volume that this Sheraton II produced, I was able to achieve a decent amount of volume before I began to get feedback. This is great because a lot of hollow body guitars often struggle to achieve considerable volume without giving back feedback.

The general sound that this guitar produces is absolutely beautiful, with an incredibly clear and consistent tone, and great note definition.

Overall, this guitar has a unique sound, while still being versatile enough for a variety of musical genres.

The pickups on this guitar are of great quality, a lot better than one would expect on a budget semi-hollow; they carry a solid humbucker sound with a bit more clarity and treble sound than you would find in a Les Paul (even though the Les Paul and the Sheraton II share the same pickups).

These pickups will overdrive a tube amp without much trouble, but you are going to need to adjust the volume a bit higher.

If you happen to be a left-handed musician, finding affordable guitar options for you to play is an uphill battle. However, the Epiphone Sheraton II comes with a left-handed option, which opens up the market that Epiphone offers to even more.

As someone who is right-handed, I cannot speak for the comfortability of the left-handed model of the Sheraton II. But, on the right-handed version of the Sheraton II, I did feel like the feel of this guitar is something that a lot of musicians talk about. The neck of this guitar is one of the most comfortable necks I’ve ever played on… It has the feel of a Gibson’s neck.

The original setup of this guitar leaves the action set very low, with no buzzing anywhere to be found on the neck of the guitar. Personally, I really enjoyed using this guitar while playing Jazz chords; I also found that it was very easy to bend chords on the original strings that the Sheraton II comes installed with.

As for the body of the guitar, the size was very comfortable to play on. In the guitar community, a lot of people tend to complain about the size of the headstock; many people claim that they feel that the headstock is just too large.

I found that the size of the headstock really helped to balance the guitar’s weight out, while also adding a bonus to the cosmetic appearance. All of the hardware worked pretty well and didn’t have any functioning problems when I pulled it out of the box. 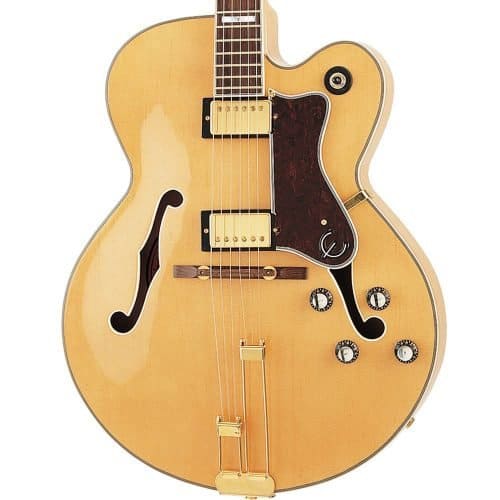 The job that Epiphone did when finishing this guitar is of great quality. The finish is amazing and virtually flawless. The binding of the body is excellent as well. The F hole binding isn’t super great if we’re analyzing the thickness, but it’s not super noticeable! As for the inlay work that was done on the headstock, the job that Epiphone did is impeccable.

However, things do start to get a little crazy when you take a second to look at the inlays on the fretboard. The fretboard itself is comprised of a great piece of rosewood, but the inlays have a bit too much space between the inlay and the fretboard.

While this isn’t a big deal, but you can see the outline of the filler. Again, this isn’t too much to complain about because you’re not dropping several thousands of dollars on a Gibson guitar.  Also, one of the inlays on the Sheraton II that I played with was not even between the two frets.

Unless you’re an experienced guitarist who has looked at thousands of guitars throughout the years, it’s not likely that you’re going to notice these issues, until you happen to be looking for reasons to pick the guitar apart.

Other alternatives to consider

If the Epiphone Sheraton II sounds like a great guitar for you, but you’re looking for something that’s just a bit different, here are a few other alternatives guitars to consider:

Gibson ES-335: This semi-hollow body guitar users 57 Classic and Super 57 Classic pickups, a ‘C’ neck profile, and the entire manufacturing process of this guitar is completed in the United States of America. The ES-335 from Gibson offers a semi-acoustic electric guitar tone with the high-quality hardware and electronic system that’s always associated with the Gibson name.

An Epiphone Icon: Hailed by blues legend John Lee Hooker as "an outdid 335," the Sheraton has been renown for decades for its combination of superior tone and beautiful pearloid and abalone inlay.

At the end of the day, I would recommend this guitar simply because the neck feels and plays just like a neck on a Gibson guitar, which is an edge that Epiphone can offer to the market that no other brand can.

The Sheraton II provides users with an extremely unique and fine tone, making this instrument great to play if you’re looking to develop your own unique sound.

FAQs About the Epiphone Sheraton II

What is the diference between the Epiphone Sheraton I and II?

The first Epiphone Sheraton model has been made in 1962 with a trapeze rather than a stop bar tailpiece which the Epiphone II has, and also one of the main differences between the two models are humbuckers.

Where is the Epiphone Sheraton II manufactured?

The older versions of the Epiphone Sheraton II are manufactured in Korea, whereas newer versions are mostly made in China.

Does the Epiphone Sheraton II has coil tapping?

No. The Epiphone Sheraton II does not have coil tapping. It has standard dual hambucker wiring.