If you’re a musician that is looking to reproduce the 1950s sound of country, pop, soft rock, and blues, the Epiphone Dot Studio Semi-Hollow Electric guitar is one of the best bets you can make.

The Epiphone Dot Studio Semi-Hollow Electric guitar is well known for its elegant appearance, with a laminated mahogany body and neck that mirrors many bodies of classic 1950 semi-hollow bodies.

Epiphone was able to create an affordable archtop semi-hollow electric guitar that was inspired by the Gibson ES-335 Dot, which was the first commercially produced thin line archtop guitar that ended up gaining a massive following of passionate fans.

The ES-335 (ES is an abbreviation for Electric Spanish) was used by many famous guitarists, such as B.B. King and Eric Clapton.

While the cosmetic appearance of this semi-hollow electric guitar is a big selling point of this guitar, there is solid craftsmanship that can be found in the Dot Studio. The Epiphone Dot Studio electric guitar comes with simple controls that allow both beginning musicians and intermediate players to easily adjust and control the sound that their instrument is producing.

Who is the Dot Studio for?

The Epiphone Dot Studio is a paired down version of the standard Dot model with a single volume and single tone control knob.

Who shouldn’t purchase the Dot Studio?

However, I would not recommend the Dot Studio for guitarists who are looking for high output guitar. The Dot Studio is a versatile guitar, but it isn’t a guitar that’s suitable for a high output signal. The pickups on the Dot Studio aren’t designed to provide musicians with a metal tone, so you shouldn’t purchase this guitar is your main style is metal or hard rock.

The specific features of the Epiphone Dot Studio Semi-Hollow Electric guitar include:

In my personal opinion, I think the Dot Studio also makes a great guitar to practice on, simply because the instrument resonates very well even when it’s not plugged in.

There is a solid block that’s comprised of maple through the center section of this guitar, that sites right behind the pickups. The piece of maple and the maple body helps to contribute to the acoustics that is produced from this guitar.

The pickups on the Dot Studio produce a round and smooth tone that fits perfectly inside of a mellow jazz feel; the bridge pickup does produce a bit of a clear, edgy tone, which just adds to the versatility of this instrument.

The Alnico Classic Humbuckers that are installed in this guitar are designed to produce a vintage sound, but you can upgrade the pickups in the Dot Studio to better fit your own specific needs.

When thrown onto a valve amp, I found that the overall tone of this guitar was rich and smooth; the bridge amp really shined when turning up the amp. This sound would fit well in Jazz or Blues but could cause some limitations in other genres when hooked up to a valve amp, but that’s simply because of the hollow body of the Dot Studio.

The pickups on the Dot Studio just don’t really work with high output pickups that can be found in guitars that are created for metal purposes alone. However, if you move away from distorted metal and try out straight-forward rock or punk, the Dot also performs exceptionally well.

As mentioned above, the Dot and the Dot Studio are both inspired by the ES-335 from Gibson, so if you’re looking or a better understanding of how versatile this guitar is, here’s a list of guitarists that have used the ES-335: Chris Cornell, Eric Clapton, B.B. King, Dave Grohl, Chuck Berry, Freddie King, Noel Gallagher, and Eric Johnson.

The Epiphone Dot Studio is a paired down version of the standard Dot model with a single volume and single tone control knob.

If you’re interested in getting your hands on a guitar that’s going to serve you well in a variety of different music styles, such as; blues, rock, pop, and country, the Epiphone Dot Studio performs extremely well in these music styles and more.

The entire configuration and set-up of this semi-hollow guitar, this electric guitar has the capability to adapt and perform well in a variety of different musical styles.

There is a wide array of animated tone combinations that come from the high-quality electronic parts that Epiphone installed in this Dot Studio, which include a heavy-duty output jack, a full-sized potentiometer, and an all-metal pickup selector switch.

On top of that, Epiphone also installed nickel hardware in their Dot Studio electric guitar, which adds incredible tuning accuracy and stability to the Dot Studio, which is what allows the Dot Studio to adapt to a variety of music styles.

A lot of musicians tend of avoiding guitars like the Dot Studio, because it’s often mistaken that the feel of a large body would be incredibly awkward to play when in comparison to other popular builds, like the Stratocaster.

However, despite the larger body, this is a guitar that is comfortable to play. The body itself is large but has a slim figure to it, so when you’re playing the guitar, you don’t feel like you’ve got a bulky instrument resting on your while you’re playing.

I would say that younger children or people with petite statures would have problems playing with this guitar while they’re seated, but most teenagers and adults wouldn’t have difficulties with this.

The neck of the Dot Studio does feel wide in your hands, but that statement can also vary depending upon what types of guitars you’re used to playing. This is a vintage style guitar, so you should be expecting a neck that’s slightly flattened while you’re moving your hands towards the fatter end of the neck.

Other alternatives to consider

Maybe you like everything that the Epiphone Dot Studio has to offer, but it just isn’t the right guitar for you. If you’re looking for a guitar that is similar to the Epiphone Dot Studio, but has a few differences that will better suit your personal needs, take a look at these other alternative guitars to consider: 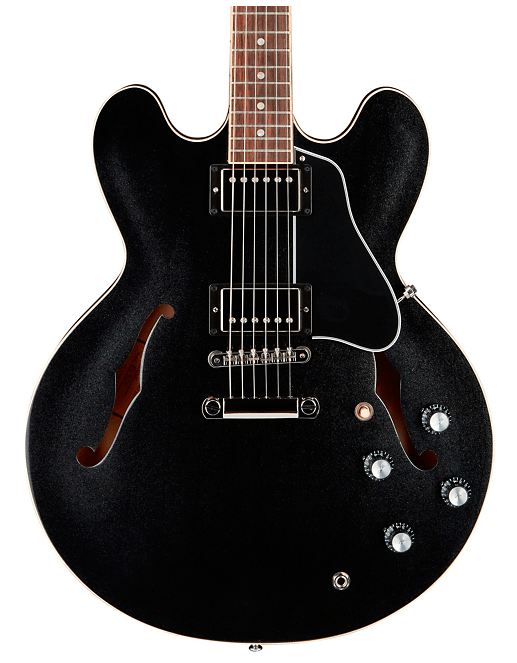 Renowned for both its playability and great, warm tone, it became a fixture with electric blues, rock and jazz players. 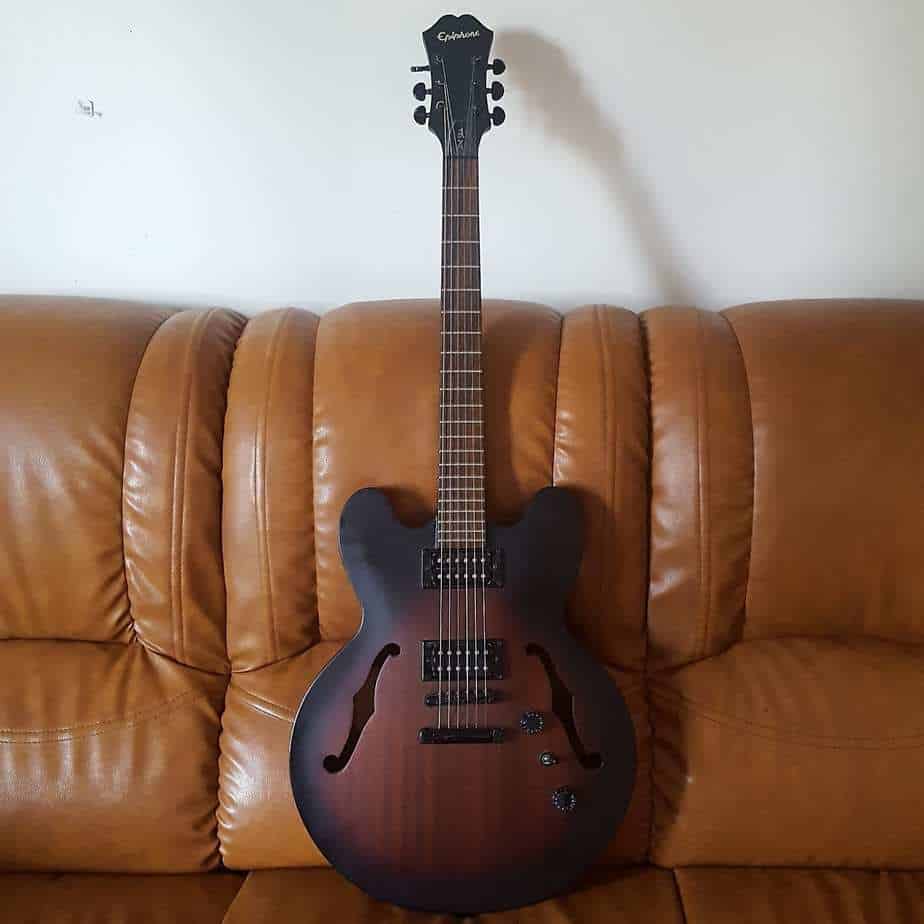 Check Price Buy at GuitarCenter
We may receive compensation from the companies whose products we review. We only recommend products that we believe in and test.

However, you’re going to be paying more for a guitar that’s just a bit fancier to the eye and doesn’t have any real upgrade in sound. If you’re looking for a semi-hollow body that performs just as well as the Dot Studio but is more cosmetically appealing, the Dot may be the better choice for you.

Even though the Epiphone Dot Studio is comprised of some parts that are of the highest quality, the Dot Studio Semi-Hollow still allows users the ability to purchase such an amazing instrument while still being on a budget. You can purchase yourself this semi-hollow for as low as $300, which is a truly incredible deal.

However, if you’re looking for an affordable semi-hollow guitar that would fit a beginning or intermediate musician, the Epiphone Dot Studio Semi-hollow would serve a perfect fit for this purpose, because of the overall sound quality, playability, and affordability of this guitar.

Agree completely with this review. As a long-time player (since 1963) of many styles, I find myself gravitating to a "weathered brown" Dot Studio more frequently than other, pricier instruments I own. It's versatile, comfortable (even for my short fingers) and has excellent range. The only modification was installing a Bigsby tailpiece that boosted the sustain and tonality more than the whammy usage I initially sought. Great sound, playability, low cost, durable (has endured now 2 floodwater dunkings) make this a truly fine instrument.