While most multi-effects units are very much aimed at electric guitar players, some of the features in them would be a waste of time for a guitarist more focused on acoustic playing.

TC-Helicon is a Canadian subsidiary of TC Electronic, which is largely focused on vocal effects such as harmonizers and pitch correction, a tradition they’ve proudly incorporated into the Play Acoustic. I’m excited to take a look at this, and see what it does!

There are quite a few features in the Play Acoustic that identify it as a useful tool in your arsenal of guitar gear.

The first thing is that it has applications for both your acoustic guitar and your vocals, whereby you can add effects that will bring you away from being just another singer with a guitar. Most notable of these is the harmony effects, so you can play or sing, and it will track the sound and apply harmonies in real time.

This is an ideal piece of kit for solo, acoustic singer-songwriters.

If the time is taken to familiarize themselves with all this can do, and with the right songs and arrangements, the Play Acoustic has the potential to really bring their live sound to a whole new level, and the ability to really stand out amongst a heavily saturated market of such performers.

I do think it’s important to highlight that just owning the box and bringing it with you onstage isn’t enough. It’s something you have to work with to get the most out of. Think of it as having an additional musician performing with you – you wouldn’t publicly perform with one, without having practiced first!

The general implication of the Play Acoustic’s features is for a live setting and taking a look at the parts involved in its creation, it’s definitely been designed with that scenario in mind.

Firstly, it’s made of a sturdy steel chassis, with high-quality footswitches on the top, for you to engage whatever effect while you’re performing.

Looking at the back panel, and there’s a lot going on.

Looking at the top panel, the centerpiece is it’s bright, backlit LCD screen to show you what exactly your’re doing as you go through its features. This is supported by six buttons to select your effects, and a knob to adjust them for what you need. 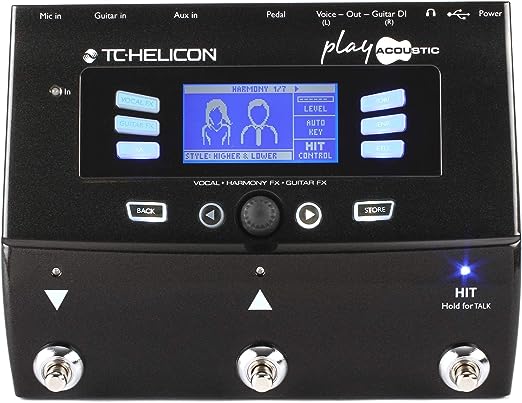 Buy at Amazon
We may receive compensation from the companies whose products we review. We only recommend products that we believe in and test.

The Play Acoustic has been designed with the gigging musician in mind. To this end, the metal casing and footswitches are well-suited. I’d be 100% confident bringing this on the road, without any worry of it breaking.

Despite the ruggedness of the design, it’s not an excuse to go throwing the pedal around. You still need to be careful, especially with products based on digital interiors. They can get loose, and they can break internally. If you look after this pedal, the most issue you’ll have is some scuffs.

The placement of the controls and buttons are all logical and make sense, and the LCD screen will be fine on even the darkest of stages.

I will say that if you’ve been doing the solo, acoustic singer-songwriter thing for a while, having this pedal at your feet, that does so much, might be a shock to the system. That’s why it’s important to spend quite a few hours making sure you know the layout of the pedal, and how it will do what you want and expect when you need it to happen onstage.

So far, so good then. Everything is looking well, but let’s see what the Play Acoustic will do for your sounds.

Seeing as this is a guitar gear website, we’re going to keep things focused on the applications of the Play Acoustic to your guitar sound.

Looking at the reverb effects first, there are 36 different types available, taking some directly from parent company, TC Electronic’s, pedal of contemporary legendary status, the Hall of Fame. With this number of reverbs available, you’ll be sure to find one that works for your music, whether it’s emulating a bathroom or a cathedral!

The Play Acoustic’s μMod set of effects is one I personally find a bit weird and includes chorus and detunes. I don’t want to say these are impossible to apply to an acoustic guitar, but I think it would take a certain talent to give them an applicable audio aesthetic to appeal to a wide audience.

The next one is the most exciting. It’s called the BodyRez EQ. Generally speaking, you know how when you mic up an acoustic guitar, and it has a lovely, warm, resonant sound, that will reflect the natural nuances of the guitar’s sound? But when you have an electro-acoustic, with a pickup, it loses that warmth, and can sound a bit weedy when it goes through a PA?

Well, the BodyRez is intended to breathe some of the life it loses when it’s wired up, back into it.

Beyond the effects, there’re all kinds of things you can do with the Play Acoustic. If you wanted to go really nuts, you could try micing up your guitar and applying some of the vocal effects, or micing up your electric guitar amp!

Experiment, have fun! That’s where progress comes from!

Getting back to straight up plugging in your electro-acoustic though, and the original intentions for this pedal, there is a lot to play with, especially in terms of the reverbs and μMods. The reverbs are OK and pretty easy to figure out whether it’s right or wrong, but the choruses and detunes might take a little more working out.

It’s not that the effects are difficult to use, it’s just that a little patience, and some honest friends, will go a long way in getting the most out of the pedal. It would be useful to record yourself performing with, it just to be able to listen back and really pick out, what’s working, and what’s not.

While not a full audio interface, the USB connectivity does allow you to record your guitar or vocal parts, with the effects applied, but the playback will have to come from another interface. That feels like a bit of a cop out really.

Some Alternatives to the TC-Helicon Play Acoustic

Effects rigs for acoustic musicians isn’t the biggest market in the world, but we have a couple of things to look at.

BOSS have a few offerings because of course they do. Their flagship one is the AD-8. 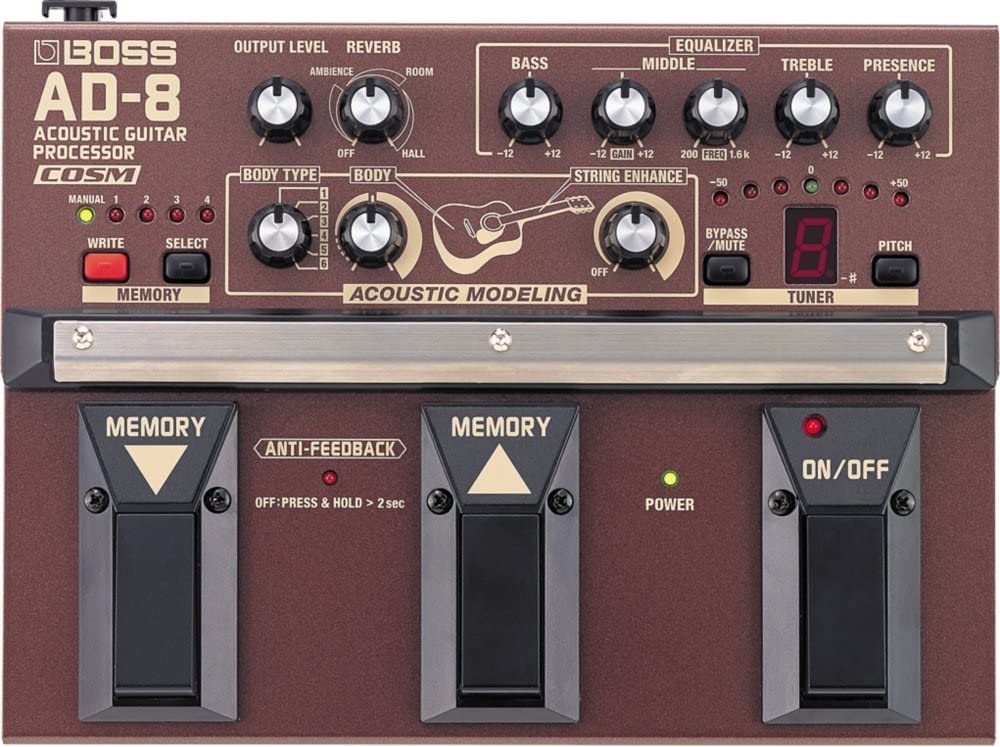 This is an interesting gizmo and has a different aim than the Play Acoustic. The core idea behind the AD-8 is that it will emulate high-end acoustic guitars. What an idea! Interestingly, it doesn’t specify which guitars it will emulate.

It’s as easy as selecting the type of body you want to sound like, and away you go. I’m not sure what I make of it, but I appreciate that it’s a good idea that would have practical applications for some guitarists.

If you normally play a show with a few guitars, to achieve different sounds for different songs, but you’re booked to play a show that just doesn’t have the room on stage for all your guitars, the AD-8 would solve those problems. 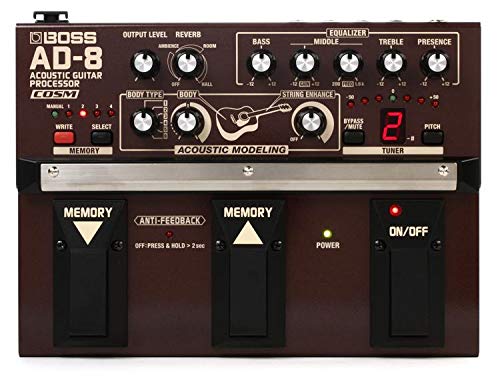 Boss AD-8 Acoustic Guitar Processor
$349.99
Check Price
We may receive compensation from the companies whose products we review. We only recommend products that we believe in and test.

Zoom’s A3 takes elements from the Play Acoustic and the AD-8, and then some. 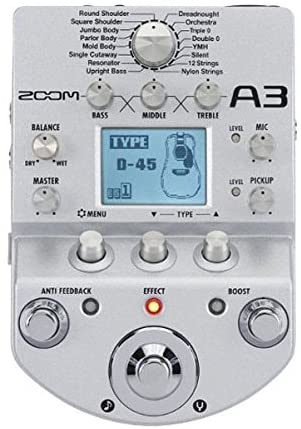 Where the A3 stumbles off in its own direction entirely is that in addition to emulating guitars, it wants to emulate the microphones that would be used to mic them up, with choices inspired by legendary mics like the Shure SM57 and Neumann U87.

On top of that, you can select effects such as delay, tremolo, phase and flange. It’s not impossible, but it would take a player with great skill and patience to make those work on acoustic.

I can definitely see an intermediate acoustic, solo singer-songwriter getting along well with the Play Acoustic. In a saturated market, it’s sure to let them stand out if they have the patience to learn how to tastefully apply it.

Is the acoustic play (black box) still being manufactured and sold by retailers or has it been discontinued? Sweetwater shows it temp unavailable and I can't find other retailers carrying it.