T-Rex aren’t known for their multi-effects pedals at all. They’re better known as the creators of some very tasty sounding, but not very cheap stompboxes, as well as power supplies, pedalboards, and relevant cases.

So, what do we make of them coming out with a multi-effects unit?

Well, going off their existing reputation and positioning, it’s unlikely that it’s going to be lame. Going off this price tag, it really better not be!

Look, it may not be their core business, but T-Rex has been around for long enough and will have well-enough established practices not to do terrible ideas. Right? 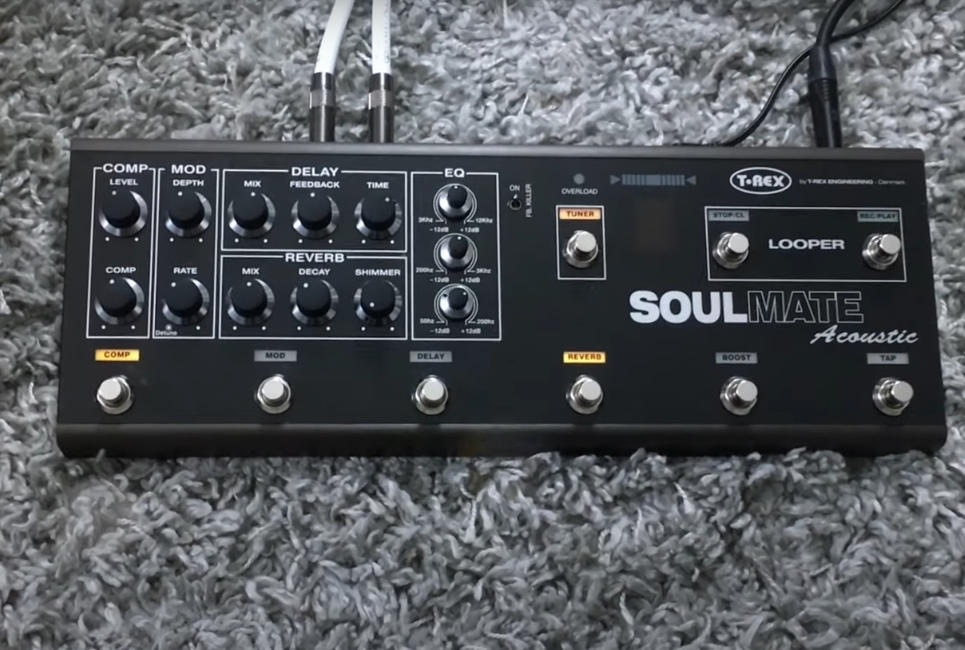 The core features of the Soulmate are essentially that it is just five effects.

If you like the idea of a multi-effects unit, but feel you don’t really have any need or want for most of the stuff that manufacturers are trying to cram into it, this could be for you.

This is about the complete absence of frills. T-Rex aren’t trying to show off. This is literally taking five of their best pedals, and shoving them into one box. 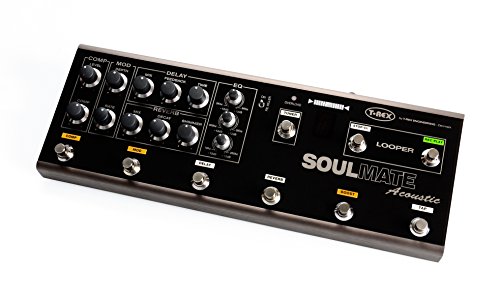 I guess there are a couple of people this would work for.

As it only has five effects, it would be for people who are picky about what effects they need.

As those five effects are exclusively from T-Rex, you might also want to be a fan of their effects.

Aside from those two, given the cost of the Soulmate, it’s likely that prospective owners are going to be professional musicians. If you spend this amount on a pedal, you’ll want it to be heard, and you’ll want to be seeing it as an investment that you’ll be getting a return on.

Probably the first surprise with the Soulmate is the fact that they’ve gone for a black finish. T-Rex makes some of the most brightly colored effects pedals around. When they’re doing something so different to their usual approach, I definitely would have expected a bright yellow or green finish.

Anyway, the actual material used is rugged and sturdy. The six footswitches are also metal, and look like they’ll take a few stomps for a few years.

Looking at the back panel, and it’s as straightforward as you would expect: jack plugs for input, with two for output; a socket for your power supply; and two further jack plugs for a loop, to incorporate the Soulmate with your other pedals – this section has an additional plug for power, this time for output, for powering other pedals.

You’ll also notice a boost knob on the back panel. This is for adjusting the level of the Soulmate’s boost function to whatever you need.

In addition to the functions of a series of traditional pedals, the T-Rex have also included a tuner, 10 spaces for presets, and a tap tempo for working with the delay.

The Soulmate feels durable, solid and weighty. It could handle a few years on tour. You’d want to be giving it some serious abuse if it didn’t last.

The layout of the build is fine. There’s nothing about it that makes you wonder what the designers or makers were on when they were dreaming it up and putting it together. Giving the footswitches a fair wiggle and poke gives a reassuring lack of movement.

T-Rex promotes this as being five of their pedals stuck together, so removing the need to set up various pedals, with various connections and power supplies, and that is really what they’ve done. It is just like having five pedals side by side, where you can operate one at a time, dialing in your own tones.

Probably the key distinction is between this and the individual pedals is that you can save up to 10 presets here, rather than having to tweak it every time you take out your Soulmate to play. That’s very useful.

The construction will satisfy somebody who just needs the core pedal sounds, whether they need them for gigging every night, or just for their own leisure playing at home.

Let’s take a listen and see what these core sounds are actually like though.

From left to right on the Soulmate, the effects are: overdrive, distortion, delay, reverb, and boost. It’s essentially taking a bit from each of the categories the masses of effects of multi-effects pedals usually have.

The overdrive is taken from T-Rex’s Møller pedal. This is supposed to be a nice gentle overdrive, aimed at blues, just edging over to blues-rock. It’s a pleasant, well-balanced tone, but it can be cranked nicely for some classic rock sounds.

If you want things a little bit more dirty, the distortion section is based on T-Rex’s Mudhoney pedal – the original single-channel one, rather than the contemporary one with two channels. This one has heavier players in mind. The Mudhoney is one for pushing that boundary from warm drive to dirt. It doesn’t get too dirty, not anywhere near any kind of fuzz, but, still… dirty.

Moving along to the delay section, which is apparently based on both their Replica and Reptile models. Both of these pedals are renowned for two things: the range of tones, and the near-analog warmth in a digital pedal. As a digital pedal anyway, it wasn’t to difficult to duplicate that for the purposes of the Soulmate.

The reverb switch is based on the Room-Mate pedal. Now, the Room-Mate is a lovely tube-driven piece of kit, something distinctly lacking from the Soulmate, but it’s not a bad job of replicating the lovely spring and hall reverbs of the original.

The final effect is a boost. Remember earlier, when I mentioned the boost level on the back panel? That’s for that. It works pretty well at boosting clean tones, but I always find that an EQ or overdrive/distortion pedal is better for boosting your driven sounds.

For the player who wants just some core boutique effects in a single box, they’ll certainly get hours out of the Soulmate, just from enjoying what it does.

This is especially for players who don’t want to spend their time figuring out what button to press to find those core effects amongst the masses of fun you usually get in a multi-effects pedal.

I said at the start that T-Rex seemed to be going for quality over quantity, and that’s what they’ve done. It’s the price range of professional equipment, but I can see an intermediate musician with the money getting a lot of enjoyment from it.

Playability isn’t always about the number of effects and USB connectivity.

Some Alternatives to the T-Rex Soulmate

There really aren’t very many boutique multi-effects pedals around, but there are a couple worth looking at.

With an MSRP of $979 there’s no denying that the Carl Martin Quattro is pretty cost-prohibitive. Think about it: the most common use of effects pedals is for guitarists who need a range of sounds for whatever it is they’re playing, but can’t afford all the individual stomp boxes they need, so multi-effects is the compromise.

So, the tone of this needs to be the equivalent of going on a date with your celebrity crush, where you’ll drink the tears of angels, before riding away together on a unicorn. Or something.

Like the Soulmate, the Quattro is limited in the number of effects it presents: echo, chorus, two types of drive, and compressor. However, the difference – and this is a big difference – is that it retains analog build. There’s not a hint of the harshness associated with digital here.

On the other side of the Soulmate is the BOSS GT-100, with an MSRP of $699. This is a bit more in line with the traditional image of a multi-effects pedal. BOSS are one of the top names in making such things, so you don’t really have anything to worry about.

In saying that, the GT-100 doesn’t have as many effects built into it as some cheaper models might. It comes with 44 effects, which includes BOSS’s famous COSM technology for amp modeling. Most notably on first appearance, it comes with a built-in expression pedal, a feature not included – or required – on the Soulmate or Quattro.

Outside of that, the GT-100 pretty much comes with all the bells and whistles you’d expect from a digital multi-effects unit. It has 200 presets – 100 from the factory, and 100 to fill yourself. It has USB connectivity, so you can use it as an audio interface or downloading free effects patches from BOSS.

BOSS GT-100 Guitar Multi-effects Pedal
$481.91
Check Price
We may receive compensation from the companies whose products we review. We only recommend products that we believe in and test.

The Soulmate isn’t cheap, and probably isn’t the most versatile piece of gear around. It’s really for professionals and intermediates who know the sound they want to achieve and can just go ahead and do it.

The sounds are right up there with T-Rex individual boxes, so I’d definitely recommend giving it a go if you have the budget.