Line 6 have established themselves as a solid brand when it comes to effects. That actually feels like an understatement: they’re one of the top names, and they didn’t get there by making products people didn’t like.

Their M series of products are intended to cram all of their previous multi-effects into one case, with a few bonuses thrown in for good measure. They have three different sizes in the range: the M5, M9, M13

They’re distinguished not just by their size, but by the “bonus features” beyond the effects. Here, we’ll be looking at the M9.

The core feature of the M9 – and any of the pedals in the M series really – is that it takes all the sounds from Line 6’s effect-specific pedals, and puts them in one box.

Say, for example, their DL4, which exclusively had various types of delay in it, or the MM4, which just had modulation effects. When these pedals have been so-well received, it makes sense to give people the chance to have all of them, at once, in a single unit.

This piece of gear find itself in the intermediate category, but bordering on a professional level piece of kit.

The price of the M9 suggests it should be accessible to intermediate guitarists. It’s the reputation of the individual pedals from which it derives its effects selection that implies it would be at home in front of a professional musician. Even just thinking about the DL4 delay unit – it’s been used by everybody from Noel Gallagher to Lou Reed.

Obviously, it could be used by a , but its rugged build implies it’s really aimed at gigging musicians.

The M9 comes housed in a heavy duty metal case, with solid looking metal footswitches. It’s got a small LCD screen so you can see what you’re doing. It has a further six plastic knobs for adjusting the parameters of the various effects. 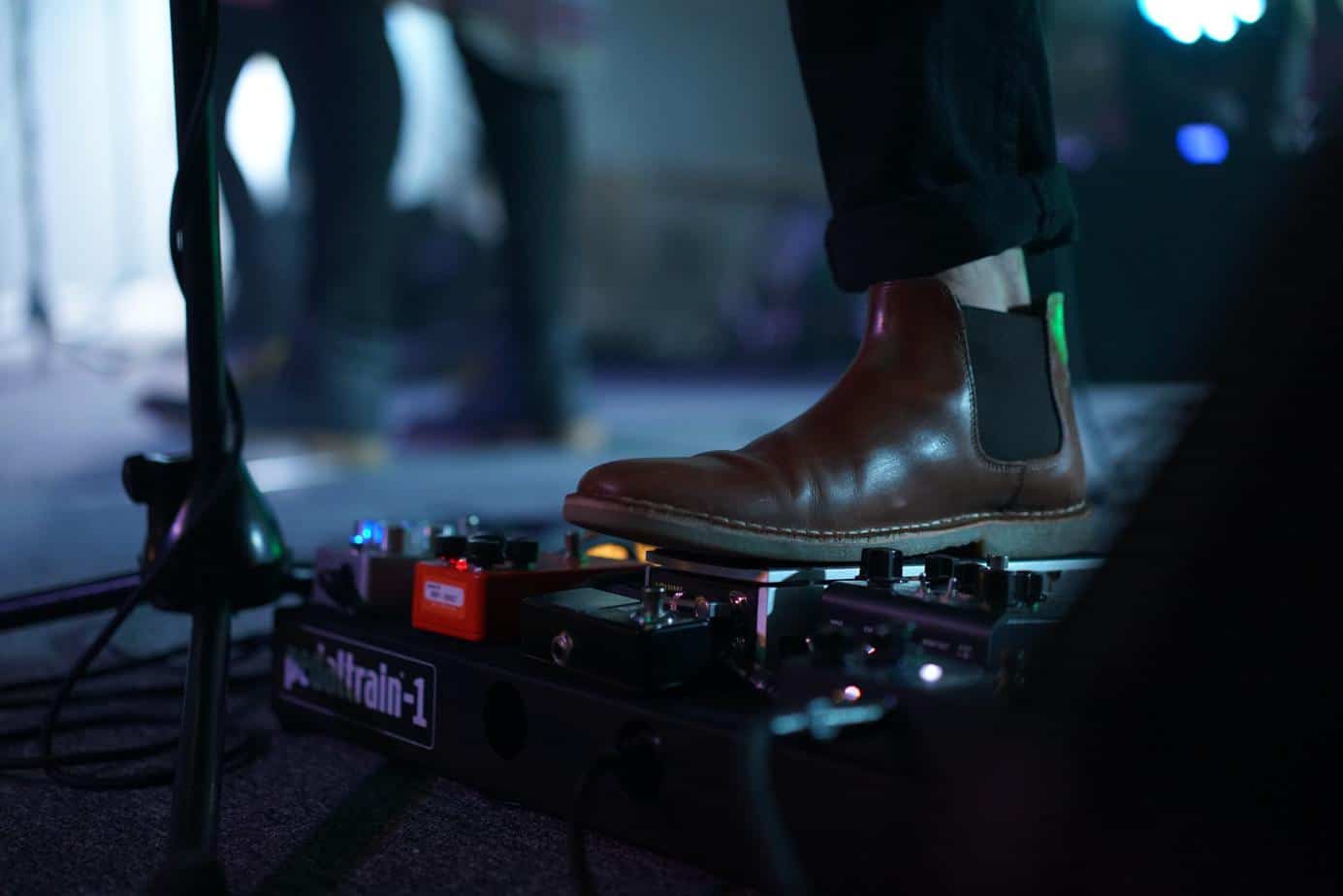 Taking a look at its back panel, it’s a pretty standard affair. It has jack plugs for stereo inputs and outputs; two jack plugs for connecting expression pedals – you can have one to use for wah and another for volume; input and output for MIDI fun; and your power input. No alarms and no surprises there really.

The quality of the parts helps to point this at being a professionally orientated multi-effects unit: these would be wasted on a ’s pedal that wouldn’t be used beyond a bedroom.

The contrast of black casing with the chrome-finished footswitches are not exciting, or original in terms of color schemes for multi-effects pedals.It would be nice to see a company buck that trend, but alas, today that honor won’t be going to Line 6.

The lack of USB connectivity shows that this isn’t supposed to do anything fancy: it is literally intended as a boxful of effects.

Following on from that, having considered the no-frills approach to the parts, the construction of the M9 takes a similar approach.

This is quite simply a rugged black box of noise and effects. It’s hard to imagine it ever breaking, but that’s not an invitation to start throwing it around!

Its total weight is only three pounds, so heavy enough to know it’s there, without it being cumbersome to bring to gigs.

Apart from the parts and construction, the fact that Line 6 – one of the most technologically capable manufacturers around – have avoided including anything to do with connectivity that’s not directly related to music, such as USB or Bluetooth, is a skin and bones approach by their standards.

If you’re looking for something that’s been solidly constructed that just does effects, the M9 could be for you. It’s as if they just wanted to take one aspect of the usual features of a multi-effects pedal and do that. This makes it one the few multi-effects pedals that literally does just that.

There’s not an awful lot more to say about its construction. Line 6 knew what they were doing, knew what they wanted to achieve, and went ahead and did it. Let’s see what the sounds are like. 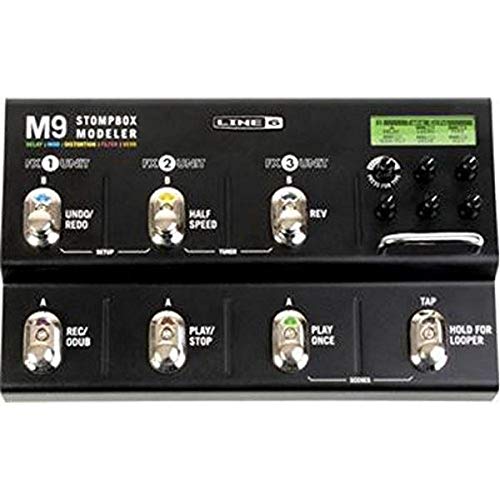 Line 6 M9 Stompbox Modeler Guitar Multi Effects Pedal
$706.99
Check Price
We earn a commission if you click this link and make a purchase at no additional cost to you.

With over 100 effects in this little box of magic, there’s too much to cover in this little review, so unfortunately, I’ll have to gloss over some highlights.

Line 6 have split the effects into six categories, combining some classic stomp box tributes with some original sounds of their own creation. It breaks down like this:

As digital effects emulation goes, these aren’t bad, but when you’re at this price point, they should be. They will lack that analog warmth. If you wanted, you could get the M9 for the range of effects, and there is a supplementary box you can get from another brand designed for softening the harshness that sometimes comes with digital effects.

Overall, this shouldn’t leave any guitarist stuck for new or interesting sounds.

The M9 has a very cool feature that it refers to as ‘scenes.’

A scene is essentially a set of effects that you can access quickly mid-set – essentially the digital equivalent of having a bunch of pedalboards with you. On the M9, you can store up to six effects in one scene, with storage for 24 scenes.

This is a pretty useful, especially if you’re a guitarist who needs to cover a lot of styles. This could be playing in a covers band that needs to keep a lot of different people happy with lots of different songs in one night, so you can separate your blues classics from your pop ballads. Or, if you play in multiple bands: you can have one scene for your grunge pop band, and another for your reggae nights.

Elsewhere, you have 28 seconds of recording time with the in-built looper. They’re always fun when used tastefully. Unfortunately, I didn’t get to play with the expression pedal inputs, but some videos online make it look pretty handy.

Ultimately, the M9 is a pure tone machine. Even if the sounds lack the warmth of their original inspirations, they’ll be perfectly good enough to cater for a versatile covers guitarist’s needs.

Line 6 M9 Stompbox Modeler Guitar Multi Effects Pedal
$706.99
Check Price
We earn a commission if you click this link and make a purchase at no additional cost to you.

Alternatives to the Line 6 M9

The higher you go up the price range of multi-effects pedals, the fewer competitors there are. But you can guess the names you’ll still be seeing.

This is more of your typical all-singing, all dancing multi-effects unit. It has over 160 effects, including amps and cabs, USB connectivity for you to hook up to your computer and uses as an external interface, and 20 seconds of recordable looper time.

Two additional features stand out. The first is the ability to control external effects pedals with the RP1000’s footswitches. And the second is that the absolutely incomparable sound of DigiTech’s legendary Whammy pedal has been included. 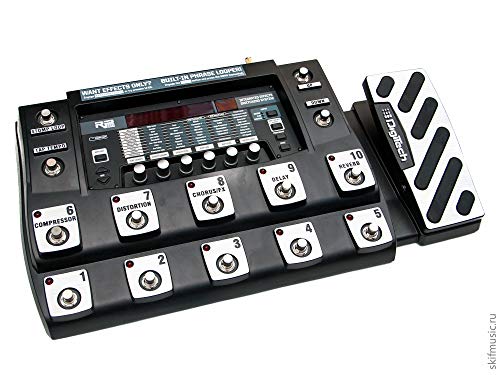 DigiTech RP1000  Integrated-Effects Switching System
$449.98
Check Price
We may receive compensation from the companies whose products we review. We only recommend products that we believe in and test.

TC Electronic’s Nova System is closer to the M9. It’s focused entirely on the effects aspect of a multi-effects pedal – no amp or cab sims here. It also excludes any expression pedal – that’s up to you to find and plug in if you decide you need it. 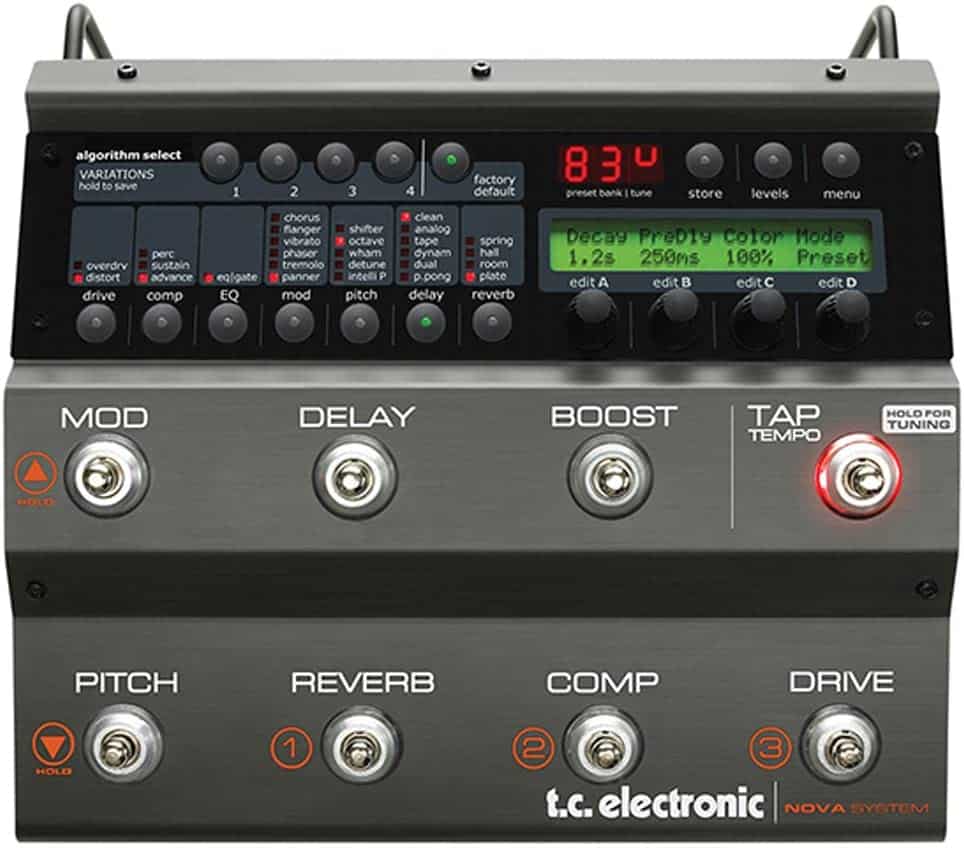 The main thing that TC Electronic seem to be trying to get across with the Nova System, is that it will give you analog sounds, with the ease and versatility of digital.

To that I would say yes and no.

Lauded by critics for the authenticity of the sounds, there’s no doubt the Nova System spent a lot of time in R&D before its public unveiling.

My reservation is just a point of expectation management really: a multi-effects unit is only going to sound as good as the guitar going in one side, and the amp it leads to from the other. 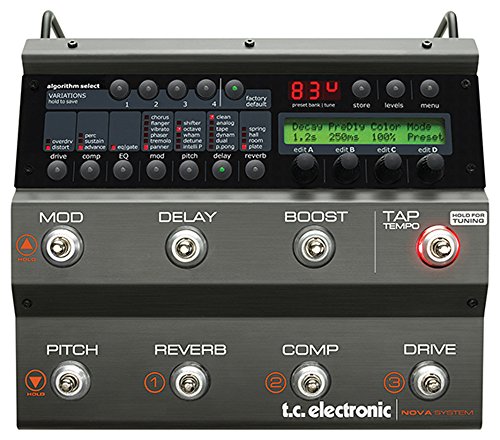 TC Electronic Nova System Floor Based Analog
$259.99
Check Price
We earn a commission if you click this link and make a purchase at no additional cost to you.

The M9 is for intermediate, but regularly gigging guitarists. With the lack of amp modeling, it would need a good amp to do it justice. It would likely be good for the guitarist who knows they have their perfect amp and won’t be changing it anytime soon. Get to your local guitar store – see what it does for you!

And what would that other brand be that softens the digital tone? A great line of your review with no details!! Please do tell.