I’m a fan of Hotone pedals and have a couple of their stompboxes permanently attached to my pedalboard. They’re tiny, saving a bunch of room on my board, and are very well constructed – what’s not to love.

Saving space on pedalboards without compromising functionality, has always been one of their main focuses. With the Xtomp , they take that to a whole new level.

You know how you use for phone for literally everything? Well, you can add managing your pedalboard to that list.

The basic premise of the Xtomp is that it is a single pedal, and you control the effects it produces via Bluetooth from your smartphone or tablet. 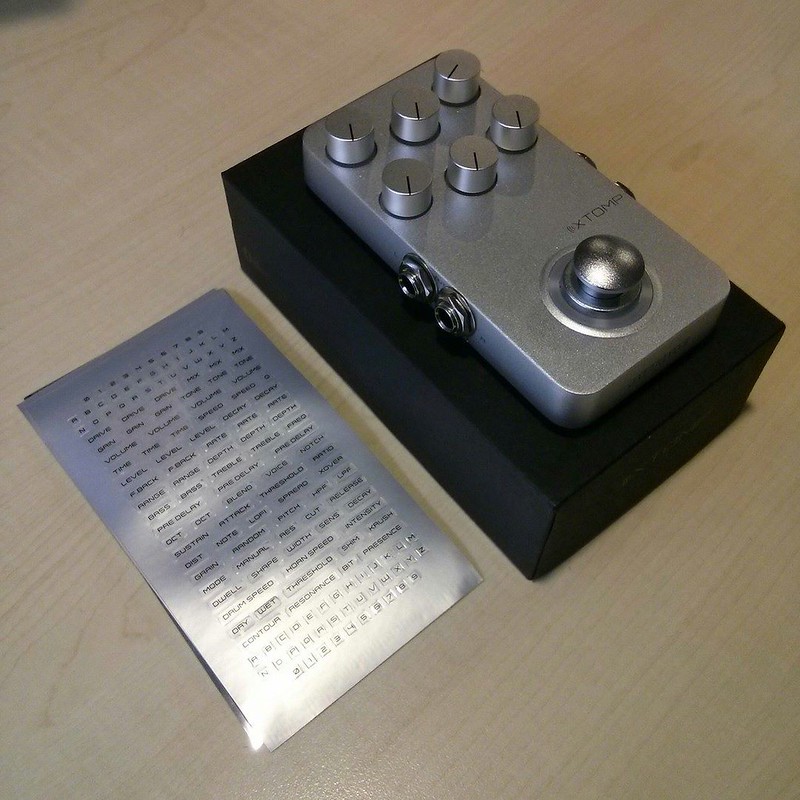 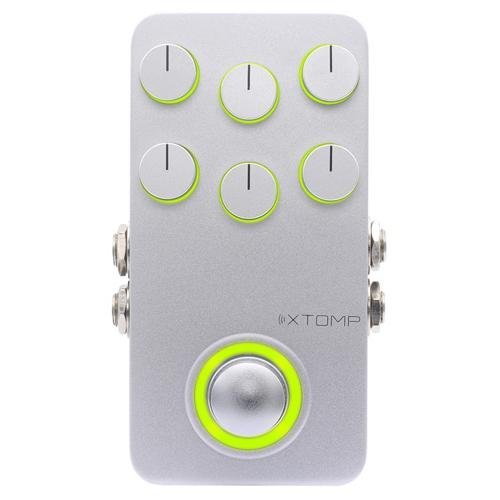 App-based modeling effects pedal. Choose from a growing library of over 300 effects and amp models.

The Xtomp has two core features really: firstly, it’s all of your effects and amp models in a single box; and secondly, it’s controlled from your phone or tablet.

Straight away, points to Hotone for making the Xtomp compatible with both iOS and Android devices. You may or may not be surprised by the amount of music-related tech manufacturers who seem to think that Android device owners aren’t interested in creating music!

This is definitely a piece of kit aimed at technophiles!

I can picture kids showing off gizmos going for it, or more mature guitarist who just can’t be bothered lugging around a backbreaking load of gear.

If you so desired, you could literally rock up to a gig with your guitar, with your Xtomp in your pocket; zap your desired amp and effects to the pedal, hook it up directly to the mixing desk, and away you go.

Similarly, it would be a useful tool for the space-conscious home recording enthusiast.

Looking at the parts, and it certainly retains Hotone’s minimalist approach to pedal construction, although ‘minimalist’ isn’t perhaps the right word.

Maybe ‘compact’ is a better description. ‘Minimalist’ implies that the pedal has compromised features somewhere to give a pure basic design when in fact, it’s just crammed an awful lot into a very small piece of space. 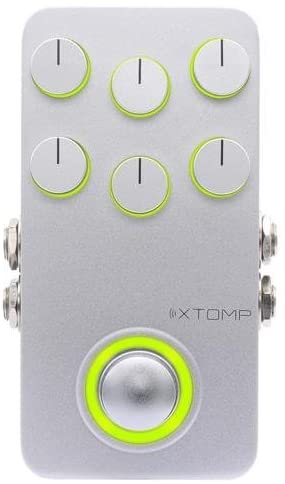 There are very few multi-effects units that can be operated with a single button, but here we are. The Xtomp has just that, accompanied by six knobs whose functions depend on the effect you have selected to operate.

It comes with two input and two output jack plugs. Again, what they do varies depending on the effect you have selected.

Other than that, it just has the plug for your mains adaptor, and a mini USB connector, for hooking it up to your computer for firmware updates.

The casing looks just like a smartphone and comes in a brushed chrome finish. It looks smart for sure. Straight out of the box that is. I know what pedals look like after a couple of years of use, and it ain’t pretty!

As I’d expect from a Hotone pedal, the quality of the Xtomp’s build is not a concern.

I feel like this is more important for a pedal like this, more so than other multi-effects units. This likely stems from how small and light it is. I mean, look at it. I’ve already compared it to a smartphone, so that’s the kind of feel you expect. It looks as if OtterBox should make a case for it!

Once you get it in your hand though, you understand that it’s tougher than it looks. But personally, I still wasn’t convinced. I mean, I knew it would take some standing on, and I’d definitely take it on the road for a tour. It’s not a BOSS pedal by any means, but nothing is.

Sturdiness of the build aside, the jack plugs all come with metal nuts. Their bright finish is actually a nice contrast to the clinical grey of the rest of the box.

The location of the knobs is standard. That’s relative to other brands’ single footswitch pedals though – for Hotone’s Skyline range of micro pedals has one at the side as well.

There’s nothing too exciting or surprising about the construction or parts. Let’s move on to how this one box to rule them all actually sounds.

Here’s a bit of a sneaky thing when it comes to the Xtomp’s tones: technically, only one effect can be used at a time. The exception to that is if you select a ‘combo’ model from within their library of effects.

The single worst thing about trying to talk about the tones of the Xtomp is that it has all of them. Well, over 300, and growing all the time, so the more Hotone add to their library, the more extensive the range of tones at your disposal.

The best thing for you to do is probably to look through the library on the Xtomp website. It should give you a pretty clear idea of what’s going on. It’s a lovely bright list of the effects available, divided into sections of the type of effect they are.

You can click on each one for a description of what it sounds like, and what pedal or amp inspired it. For some of the popular ones, you’ll recognize thinly veiled changes to the brand or pedal name.

For example, in the amp section you’ll see the Marshall 800 and the Baseman. Yes, seriously. It’s kind of fun.

App-based modeling effects pedal. Choose from a growing library of over 300 effects and amp models.

If there’s one thing to be said about the Xtomp and that’s that boredom will never ever be an option. Which is good – you want a pedal you can always go back to.

If anything, you’ll be looking to buy more to complete a full board of them. Imagine, for example, having two Xtomps. You have one song that needs a Tube Screamer sound mixed with a Small Clone, but another song in the same set that needs a Big Muff sounds mixed with a Phase 90. You can do that by playing with your phone and with two pedals, rather than having four pedals. That’s cool.

And here’s a key feature for the Xtomp compared to other multi-effects systems: there will never be an end to the range of tones for you to explore, thanks to the ever-increasing library.

100 effects is generally considered more than enough choice on a multi-effects pedal and should satisfy most guitarists. Most guitarists won’t even check out all those effects, or even most of them. The Xtomp already has 300 effects for you to try, and that’s not a fixed number.

What’s not to love about that? Essentially, its playability is infinite. What a time to be alive!

Alternatives to the Hotone Xtomp

As the smartphone market isn’t slowing down completely yet, and as more people make their devices the centre of their world, there are a couple of alternatives solutions for technophiles.

I’m not sure if the iRig Stomp from IK Multimedia was the first device on the market to work with your phone, but it certainly was one of the earliest, and well-marketed. It’s also several hundred bucks cheaper then the Xtomp 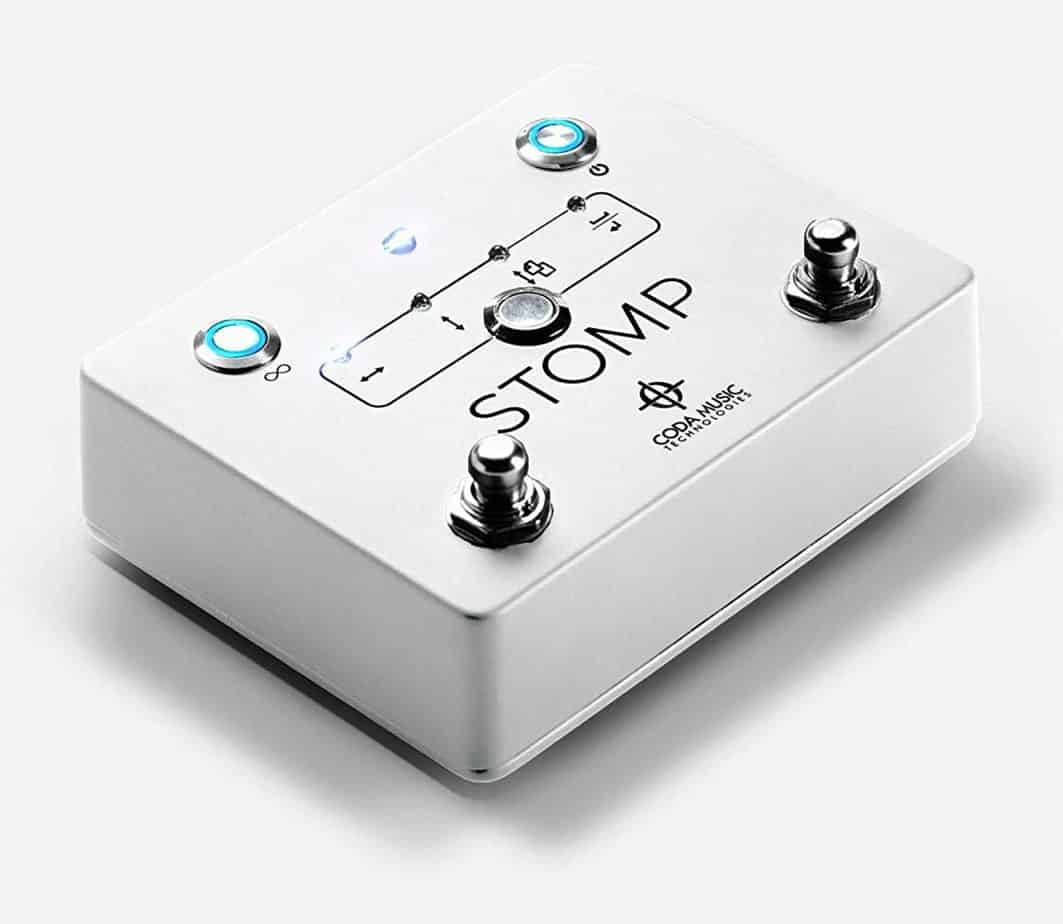 With perhaps an even more stripped back approach than the Xtomp, the Stomp has a single footswitch, and a single knob for adjusting the input level. That’s it. No frills here.

The Stomp is designed to bring IK Multimedia’s AmpliTuBe software from the studio, onto the stage, via this pedal. It operates on the same basic principle as the Xtomp: find the sounds you want on AmpliTube, zap it from your device to your pedal – tada! New noises.

It really is as simple as that!

One super-snag though. At the start of the review, I mentioned some companies not catering for Android users? Yeah, it these guys I was having a sly dig at. iStuff only for this please. 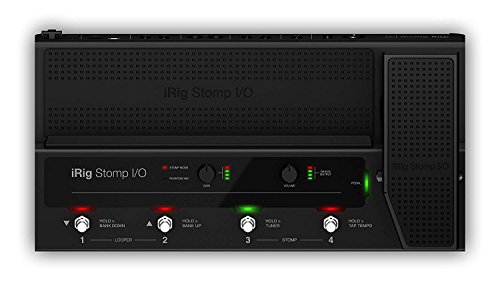 IK Multimedia iRig Stomp I/O USB Pedalboard Controller
$399.99
Check Price
We earn a commission if you click this link and make a purchase at no additional cost to you.

The only other alternative is by a brand called Griffin. No, me neither. Their offering is called the Stompbox. I hope they didn’t pay anybody a lot of money to come up with that name. This can be found for even cheaper than the Stomp.

The big difference with the Stompbox is that it has four shiney footswitches for you to play with. That’s useful. It means that within this single, super-cheap unit, you can assign different tones to different switches, and use them or not use them as you please. 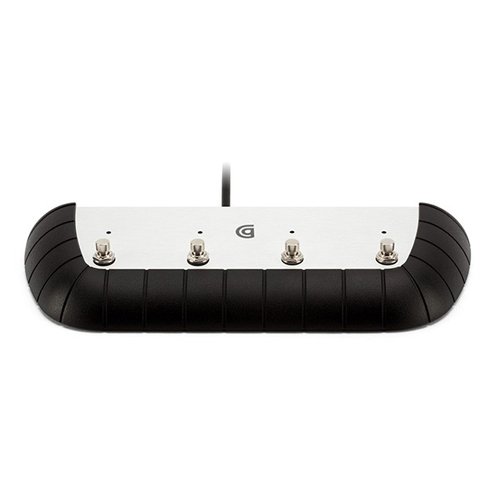 Griffin GC29031 StompBox Bundle
$21.95
Check Price
We earn a commission if you click this link and make a purchase at no additional cost to you.

There’s no denying that the Xtomp is a pretty unique piece of kit. It’s hugely applicable, and I can see a lot of modern guitarists going for it. I’d recommend this for someone who find they buy and sell a lot of pedals. They can just buy one single Xtomp and play what they need.