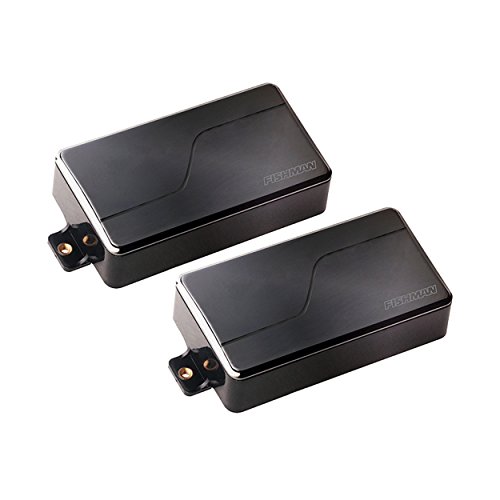 Fishman Fluence Modern Humbucker
$259.95
Check Price
We earn a commission if you click this link and make a purchase at no additional cost to you.

As stated previously, the Fishman Fluence is the first line of pickups from Fishman that’s built solely for electric guitar. Previously, the brand built notoriety because of their quality pickups for acoustic guitar and for founder Larry Fishman’s accomplishments as a player. Fishman is also renowned for producing other musical equipment, such as preamps, controllers, and effects.

For the better part of their 40-year legacy, Fishman focused solely on gear for acoustic instruments. However, they truly broke barriers with the Fishman Fluence.

The secret lies within the two Fishman Cores, completely replacing hand-wired coils. The result is no hum, tonal consistency, and a 2-voice system that can only be described as two pickups in one.

There are various Fishman Fluence pickups in the line and they all vary in performance and style. However, just about all hold the same quality that guitar players desire in their pickups.

If your playing requires multiple tones, these are the pickups for you. One of the aspects that stands out is the ease of switching tone. The Fishman Fluence can cater to various tones, almost sounding as if you’re playing different guitars.

No matter what tone you’re playing, it will always stay consistent — even if you have to change cables or adjust the volume.

Fishman promises noise-free pickups, and that’s exactly what they delivered. Guitarists also love how the pickups are generally noise-free, resulting in excellent tone clarity. That’s why these are the perfect pickups if you use high-gain amps.

The Fluence pickups are also completely versatile, making them perfect for life and the studio. They can pick up all of the details in your tone, no matter how your audience is listening to your playing.

All of the pickups in the Fluence line are about the same size as traditional humbucker pickups. You have a choice of nickel, black plastic, gold, and a brushed stainless steel finish.

You’ll need a nine-volt battery rechargeable lithium-ion battery pack to use these pickups (lasts 200 hours). Most users say investing in the rechargeable battery pack is worth the extra money, but this depends on preference.

How They Differ From Traditional Pickups

Fishman Fluence pickups use precision in the manufacturing of coils. The coils are what’s called “printed,” similar to traces on a circuit and not wound around a bobbin.

There are 48 of these circuit boards that form the Fluence Core. Two Fluence Cores are separated by a spacer and six Alnico-IV rod magnets through the middle. This design is what helps them cancel hum. In addition, this construction ensures that the sound is consistent and controllable.

These pickups are active to solve problems related to cable capacitance, but the Fluence pickups still use an analog system. The result is a groundbreaking line of pickups where guitars players can have versatility jumping into new territories.

The Fluence Cores are constructed differently compared to traditional pickups, resulting in better tone, noise reduction, and other common problems that guitar players experience with pickups.

Because of the carefully engineered circuit boards, Fishman Fluence pickups are long-lasting and reliable for all settings.

Two Voices in One Pickup

While Fishman Fluence is most ideal for heavy music, they support a range of other music playing styles.

Some of music’s biggest guitar players use Fishman Fluence pickups, including:

Fishman also collaborated with these artists to make signature lines. You can see Animal as Leaders mastermind Tosin Abasi demonstrating his signature series at NAMM 2017 here:

There is a wide range of different pickups in the Fluence line. Some of the most notable include:

Alternatives to the Fishman Fluence

While Fishman Fluence pickups are innovative, there are other high-quality pickups on the market. Here are others you should consider.

Bare Knuckle is based in the UK and founded by session guitarist Tim Mills. Mills formed the company because he needed pickups that covered a huge range of sounds, so he decided to make his own. To this day, he makes all pickups by hand from his workshop in Southwest England.

They make hand-wired pickups in a variety of shapes and sizes. Like Fishman Fluence, they go outside of the traditional path and make pickups for guitarists who really want to stand out. Their pickup selection includes extended-range all the way to vintage-style. They also accept custom orders.

Some of the most notable artists on their roster include Misha Mansoor, Matt Bellamy, Johnny Marr, and Rabea Massaad.

EMG specializes in high-output active pickups. This was especially important during the 80s. Heavy metal was born and only growing. The musicians of this time demanded more saturation and higher volume outputs.

EMG’s pickups not only supplied this demand but offered more. They provided consistent sound and dense tones. Guitarists and bassists were able to achieve sounds they weren’t able to produce before, leading to groundbreaking innovations.

Because of this fact, EMG has always been the staple pickup brand in the rock and heavy metal world. The only exception is that musicians today have more choices with their pickups.

They still have this dominance to this day. EMG arguably has the highest output of any other pickup brand on the market. Before you plug your guitar in, you know what sound you’ll get — even if you’re using a new EMG product. This trust that musicians have with EMG is what has truly made them legendary.

Last but not least, EMG pickups look cool. Many musicians claim this reason when sticking with EMG.

Answer: Fishman Fluence pickups are unique because they have both active and passive qualities. Referring back to the two “voices” or “tones,” this is where musicians will hear the biggest difference compared to other pickup brands.

Voice one is the aggressive active output that rock and metal musicians crave. Voice two is a passive voice that’s best described as crisp and clean. The result is a clear sound with a punch that doesn’t sound too thin.

Question: Why Do Some Musicians Love Active Pickups?

Answer: Active pickups are popular among rock and metal musicians for a reason. They can handle high gain distortion with ease, have less feedback which results in a cleaner sound, and your tone will improve — no matter what guitar or bass you’re using.

Question: Do I Need a Preamp With Active Pickups?

Answer: A preamp allows you to control more aspects of your sound. This includes bass, volume, treble, mid, phase, and more. To know if you truly need a preamp depends on your instrument, your pickups, and the sound you want.

Next time you play your instrument, ask yourself these questions:
• Is my sound balanced?
• Is the signal loud enough?
• Is the sound smooth?

Question: Are Fishman Fluence Pickups Good, Compared to Their Other Products?

If you’re not sure which Fishman pickups to use, the Fluence line is primarily for electric guitars and basses. The high output is ideal for heavy metal musicians who want a cleaner sound compared to the competition, though these pickups are ideal for countless other styles and players.

Answer: No. You need the rechargeable lithium-ion 9-volt battery. The battery lasts up to 200 hours.

Question: How Do You Install Fishman Fluence Pickups?

The way you install your Fishman Fluence pickups depends on the pickups you’re using, the specifics of your guitar, and other factors. This tutorial is for the Fishman Fluence Humbucker and applies to both classic and modern.

If you’re using a different model, we suggest finding another video, reading the manual if you received one, or contact the helpline for advice.

Question: How Do Fishman Pickups Work?

Answer: The coils in Fishman Fluence pickups are applied rather than wound. Think of a circuit board, where the coil spirals are printed. This is why there is so much flexibility in one pickup.

Fishman Fluence Modern Humbucker
$259.95
Check Price
We earn a commission if you click this link and make a purchase at no additional cost to you.

We recently reviewed Epiphone Probucker, Gibson pickups, and other accessories for guitar and bass players, such as strings and amps. Continue reading our guitar accessories section for more reviews, buying advice, and more