The Fender Kurt Cobain Jaguar Special Electric Guitar is an exact replica of Kurt Cobain’s famous guitar, right down to the unique controls and humbucking pickups. If you are a guitarist that prefers to play on a typical Jaguar or a Jazzmaster, this is a guitar that you will want to try!

The body of the Kurt Cobain guitar is based around the alder body of a Jaguar with a “Relic” sunburst finish, which mimics wear and age. The whole idea behind the look of Fender’s Kurt Cobain Jaguar is to look and feel like a broken-in guitar, that also still feels clean and polished at the same time.

The Kurt Cobain Jaguar is comprised of a maple neck that has a bound rosewood fingerboard that has a “C” shape, with a 24-inch scale, and 22 frets. While the short scale may feel a little bit off to Strat players, it helps to bring together the Jaguar’s edgy sound.

The tremolo tailpiece is copied right off of Fender’s original Jaguar Electric Guitar and their Jazzmaster. The controls on the Kurt Cobain Jaguar are a little bit more complicated in comparison to the typical Fender.

When looking to purchase a Fender Kurt Cobain Jaguar Electric Guitar, make sure to check the year that it was produced. When the first version of Cobain’s Jaguar was released in 2011, Fender finished the guitar with a ‘worn’ look to it, with scrapes, bumps, and dings.

However, after re-releasing the Kurt Cobain Jaguar Electric Guitar, Fender began to finish their guitar with a gloss polyester coat.

However, they did keep the heavy modifications on the guitar; the black chrome bridge, second volume pot, the DiMarzio PAF/Super Distortion pickup combo, three-way pickup switch, and the ‘Spaghetti’ Fender logo that is correct to the time period.

It is most definitely easy to become overwhelmed by the massive guitar market that’s available; there are a countless number of guitars available in every single style in the world.

This review of the Fender Kurt Cobain Jaguar Guitar will look at the following criteria:

The Fender Kurt Cobain Jaguar Guitar is definitely a guitar that is going to take a lot of money to invest in. If you are a hardcore Nirvana or Kurt Cobain fan, this would be a pretty cool guitar to have. 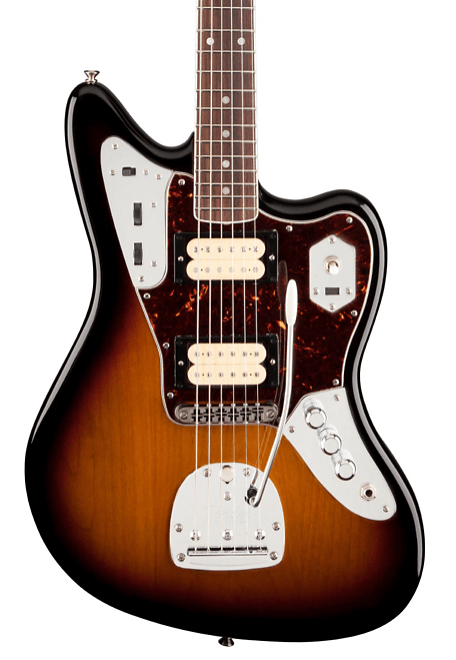 Fender's Kurt Cobain Jaguar is a new-looking version of the battered and highly unusual 1965 Jaguar that Cobain wielded during the heady early-'90s era when Nirvana ruled rock and led a musically stunning and culturally subversive movement.

Check price on GuitarCenter Check availability on Reverb
We may receive compensation from the companies whose products we review. We only recommend products that we believe in and test.

Would you suggest the Fender Kurt Cobain Jaguar?

I personally would not suggest the Fender Kurt Cobain Jaguar Electric Guitar. I personally feel like the reason that the price is so expensive is only because it has Kurt Cobain’s named attached to it.

Over a $1,000 is just too much to spend on a guitar, especially if you’re not sure if you’re going to be someone who is going to continue playing for a long time.

If you are a professional guitar player, a collector, or consider yourself to be Kurt Cobian’s number one fan, I would say all the power to you! It has a great sound and plays really well, just the only downside is the price tag that comes with this instrument.

However, if you are simply looking for a guitar with an attractive cosmetic appeal that also sounds incredible, I would tell you that there are other guitars out there that are a better investment to make.

If you’re deciding that you’re falling in love with this guitar and want to do more research, chances are you’re going to run into several terms that you don’t understand what they mean. That’s why we’re here to help!

If you want to know what all of those numbers and letters that talk about the Kurt Cobain Jaguar guitar stand for, I’ve compiled a list that explained what they are!

Who is the Fender Kurt Cobain Jaguar best suited for?

The Fender Kurt Cobain Jaguar Electric Guitar is best suited for a small group of people:

The reason why I would not suggest this guitar to beginning guitarists, or even intermediate players, is because of its price. Spending $1,200 on a guitar isn’t a reasonable decision for new guitarists to make.

This would be a really cool guitar to have in a collection if you do happen to be a guitar collector. It’s an exact replica of the guitar that Kurt Cobain performed with; it’s a large investment to make, but the aged look on the hardware makes it that much cooler. 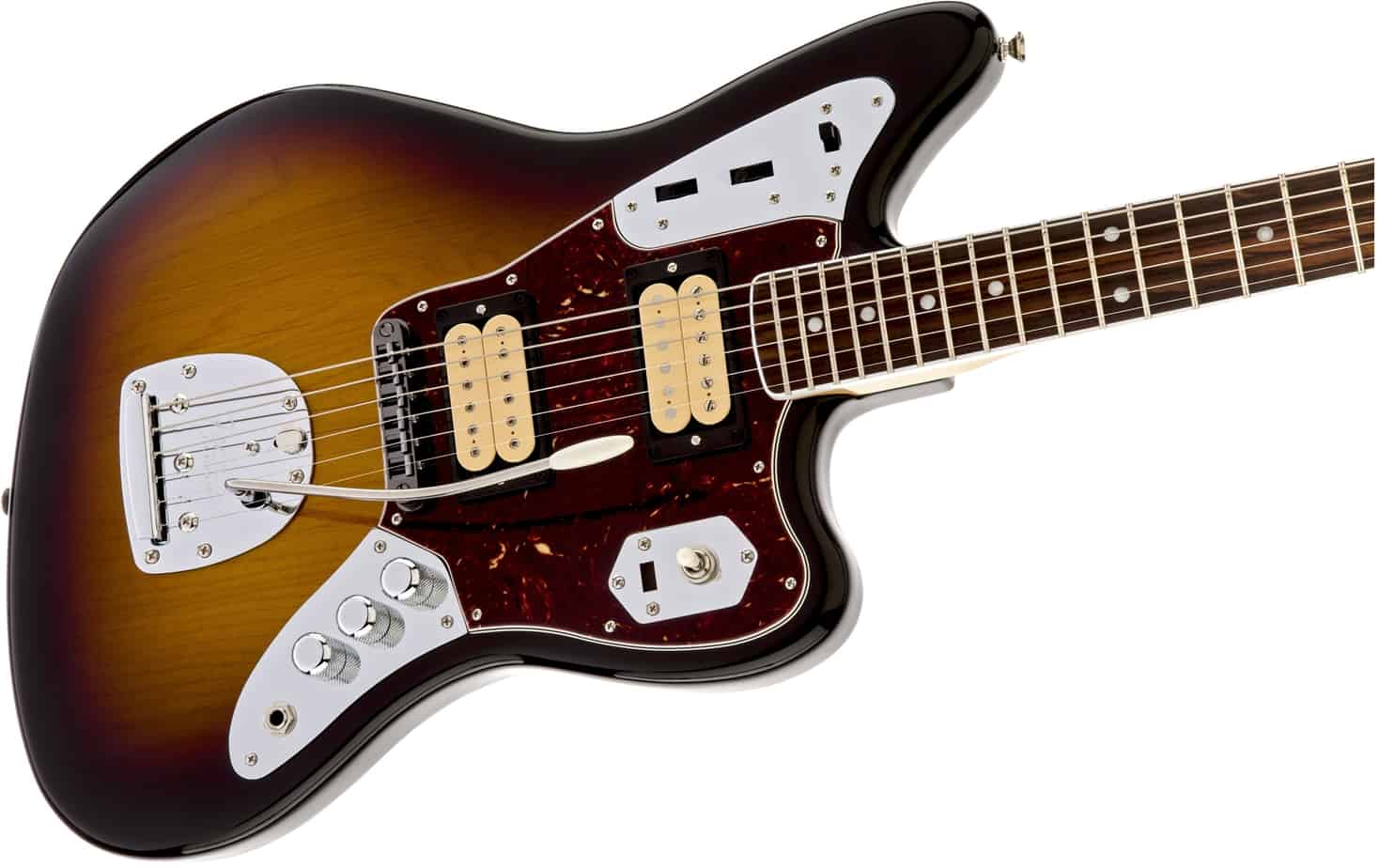 Another name that the Fender Kurt Cobain Jaguar Electric Guitar is called is the “fanboy” guitar. If you are someone who is a huge fan of Cobain’s and Nirvana’s sound, you will not be disappointed with the sound of this guitar. It is very well built guitar that is perfectly suitable for a large variety of styles, whether you are a huge fan of Nirvana or not.

Fender's Kurt Cobain Jaguar is a new-looking version of the battered and highly unusual 1965 Jaguar that Cobain wielded during the heady early-'90s era when Nirvana ruled rock and led a musically stunning and culturally subversive movement.

Check price on GuitarCenter Check availability on Reverb
We may receive compensation from the companies whose products we review. We only recommend products that we believe in and test.

Does the Fender Kurt Cobain Jaguar as advertised?

Yes, it does! The newer version of the Kurt Cobain Jaguar doesn’t have the appearance of a ‘collector’s replica’, but has the same exact tonality and sound quality that makes this so guitar incredibly desirable.

When this guitar is paired with an amp, the Super Distortion provides the same sound as the intro to ‘Smells Like Teen Spirit’. The Kurt Cobain Jaguar has an aggressive, mid-heavy, smooth sound with its paired to distortion.

Pros of the Kurt Cobain Jaguar:

Cons of the Kurt Cobain Jaguar: 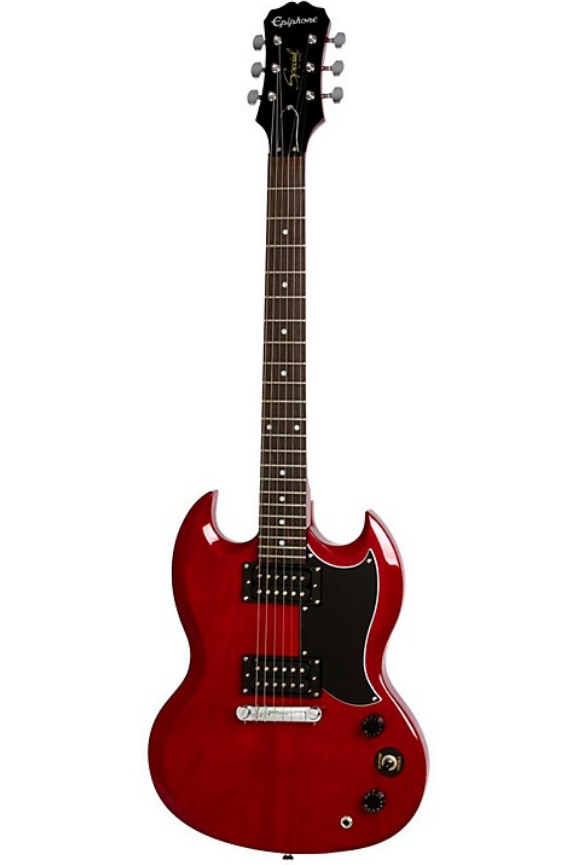 This Epiphone SG Special is an entry-level model and the hardware that comes with this guitar is the same that would come with any other entry-level guitar Epiphone produces. All of the hardware on the SG Special are chromed, which gives a cosmetic contrast between the darker color of the rest of the body.

If you are a or an intermediate guitar player who is looking for a guitar with a sexy appeal, as well as a high-quality sound, you should look at different guitars. While the Fender Kurt Cobain Jaguar Electric Guitar does perform as advertised, the price is way too high.

If you are someone who is looking for the above criteria, I would suggest the Epiphone SG Special Electric Guitar; it has a similar cosmetic look and is comparable with the sound quality. The only major difference between the Epiphone guitar and the Fender is the price; $200 vs $1,200.

However, if you happen to be a collector, someone who likes to play a large variety of guitars, or a performing artist, I would recommend this guitar. It’s comfortable enough for people with small hands or small statures to play; it’s built for people who are smaller, but does not compromise the integrity of the sound.

On the other hand, if you’re just dying to try a Fender guitar, do a little bit of research. Fender is known for making high-quality guitars for all types of budgets. The Classic Player Jaguar Special HH is one of Fender’s best guitars for a lot less money.

I have the ultimate Kurt Cobain Jaguar! I modded it! I put locking Gotoh tuner’s that were a direct replacement and I removed all of the wiring in the rhythm circuit and rewired the main circuit with one tone and volume control. I also installed a 500k pot for the volume and I wired it with 50’s wiring using a .0033uf capacitor. Oh yea I also replaced the adjustomatic bridge with an American Jaguar bridge drilled and put on the original bridge posts and a new American Jaguar tremolo unit. It is now one fantastic instrument! Take care everyone!

Do you have it in stock ? Shipping will be to Canada.

A good review, and you're right - there's no way a beginner should buy this. But an Epiphone SG is nowhere near good enough as a surrogate - they have weak pickups and uninspiring action. If you want a quality alternative for Nirvana sounds I'd suggest investing in something like a low end Gibson SG (Special or 70's Tribute) - which are cheaper than the Cobain Jaguar and give you the hot pickups. And they're guitars you could easily keep for the rest of your life. I have both the Jaguar and the SG.