In 1959, a man named Wayne Mitchell purchased a small store called The Organ Center, which quickly began selling other musical equipment, such as Vox amps. Mitchell soon renamed his company Guitar Center, aware that the face of the music equipment industry was rapidly changing.

Throughout the 1970s, the company grew tremendously, and by the ‘80s, there were retail locations all over the United States, in cities such as Minneapolis, Dallas, Chicago, Hollywood, and San Francisco.

In 1984, Wayne Mitchell passed away, leaving his legacy to a hand-picked management team that continued the company’s success over the coming years—and the company remains strong to this day. By 1985, there were 12 Guitar Center locations around the US, and during the ‘90s, the store expanded to have just under 70 stores throughout the country.

A strategic move, Guitar Center purchased website Musiciansfriend in 1999 as the internet began to take a stronger hold on the musical instrument market (and retail in general).

Although it is not clear when, at some point Guitar Center began producing its own house brand gear, which is appropriately called Mitchell—named after the company’s late founder. As with most store brand instruments, the Mitchell brand is a budget equipment line, angled toward new and curious musicians.

The following review will be on a Mitchell electric guitar, the MM100 Mini Double Cutaway. Read on to learn more! 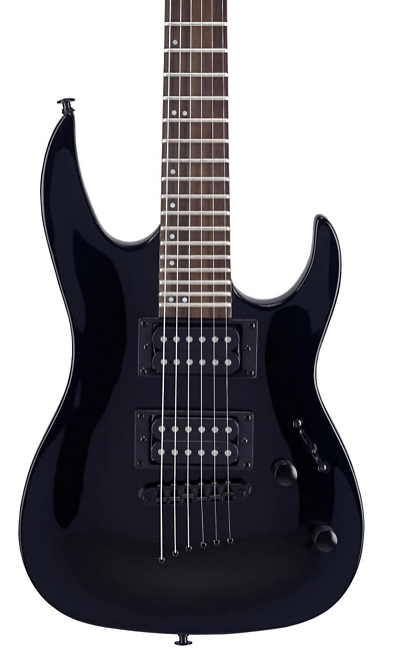 The Mitchell MM100 features a short-scale, double-cutaway basswood body and a maple neck with a smooth fretboard.

Overall, the MM100 doesn’t sound bad. The HH pickups are loud and responsive and are great at minimizing buzz and feedback. They deliver good tone for a guitar, but of course, they do not compare to higher-end pickups on professional guitars. 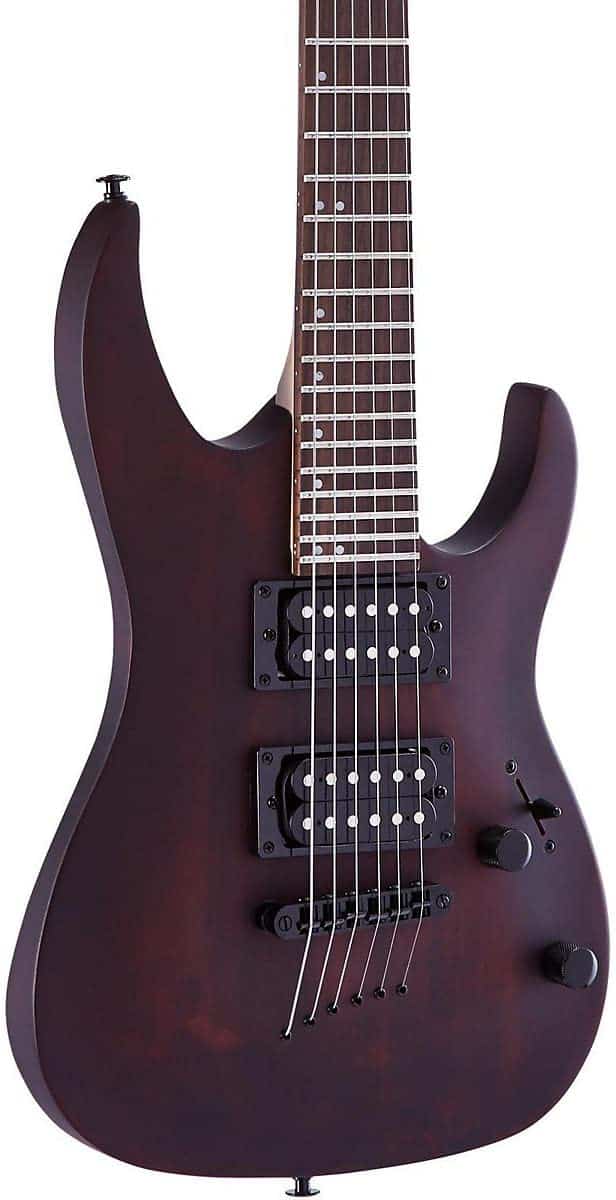 The guitar has good dynamic response and a good amount of warmth, but the pickups do lack some harmonic complexity and sound a little bit dull. As a guitar, though, the pickups are plenty good, especially due to their being potted with paraffin wax.

The through-body stringing design provides a lot of good sustain, even with the shorter scale length, and the adjustable bridge saddles and reliable tuners mean that it gets and stays in tune pretty easily.

Thanks to the versatility of the maple/rosewood neck and double humbuckers, the MM100 can be played well across a wide swath of genres, sounding nice in everything from jazz to blues, rock to metal. The neck is pretty fast, but not super fast, like the Ibanez GRX70QA, for example.

The Mitchell MM100 features a short-scale, double-cutaway basswood body and a maple neck with a smooth fretboard.

The Mitchell MM100 is a great choice for a guitar player or someone who is just curious about learning guitar but doesn’t want to invest too much money into it just yet, coming in at a very affordable $100.

The body feels comfortable to play, the basswood has good warmth, and the bolt-on maple/rosewood neck adds a little bit of presence, warmth, and twang to the tone.

The hardware is reliable, and the intonation is better than most budget guitars in the same price range. It does lack, however, some extras that other budget instruments have, such as a tremolo bar, a third pickup, or more tone controls. But if you’re satisfied with the bare minimum, the MM100 would be a great choice for you.

One thing that may turn off some interested guitar players is the scale length, as it is a ¾-size guitar. It feels small in the hands and has different tonal response than other longer guitars (such as 24.75” or 25.5” scale length guitars, which are standard sizes).

If you’re purchasing the MM100 for a younger person, someone with quite small hands, or someone who travels frequently, it may be perfect. But for an interested adult with average or large sized hands, a larger-scale guitar may be better, as it will also be a good starting point.

I would suggest visiting a music store and trying some full-scale and ¾-size guitars to compare which you would prefer before making a purchase.