When it comes to electric guitars, there aren’t many names that excite a guitarist as much as the Les Paul. A guitar model produced by Gibson, the gorgeous tone and bodywork on these guitars made it an absolute dream guitar when I first started learning the instrument. However, the price tag was huge, and there was no way I could ever afford one – until now. Bring on the Epiphone Les Paul SL!

Gibson Les Paul’s sell for insane amounts of money, but thankfully their sub-company Epiphone has stepped in to bring a more affordable model, the Epiphone Les Paul SL. I’m going to be breaking down everything you need to know about this guitar and providing my personal opinion of it, so read on to hear my thoughts!

Epiphone Les Paul SL: The Pros and The Cons

Epiphone Les Paul SL – Great If You’re on a Budget 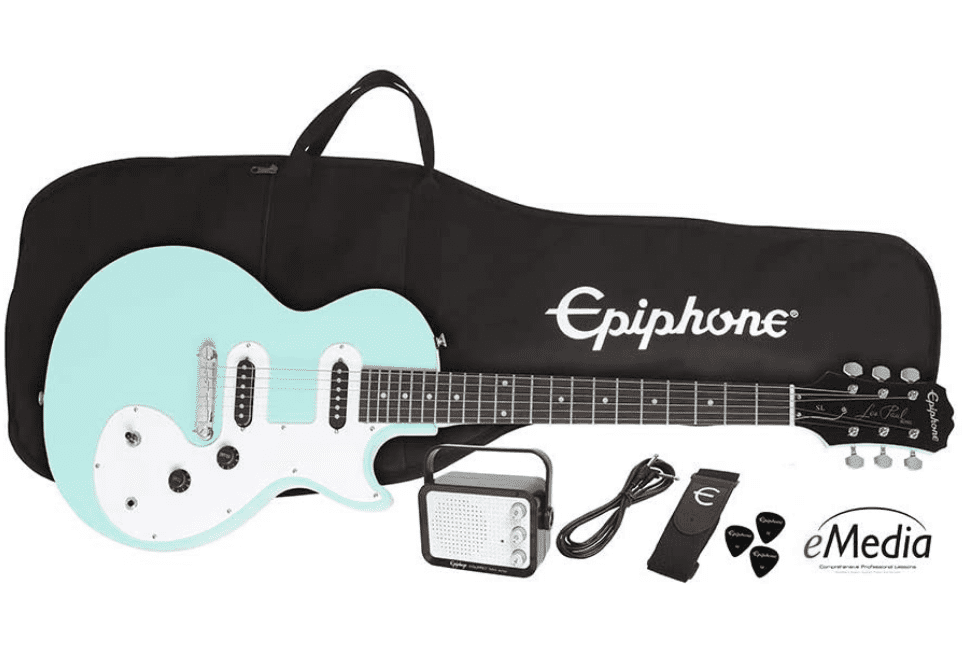 It’s a very cheap guitar that can be found for around $150, and this price tag would often be setting off alarm bells. However, it produces a pretty serious tone, especially when you compare it to other cheap guitars.

So, what do you actually get for your money? Good question, I’m going to be answering exactly that.

In order to give you a thorough breakdown of this guitar, I’m going to break the discussion into four key areas:

Let’s get into some of the technicalities! 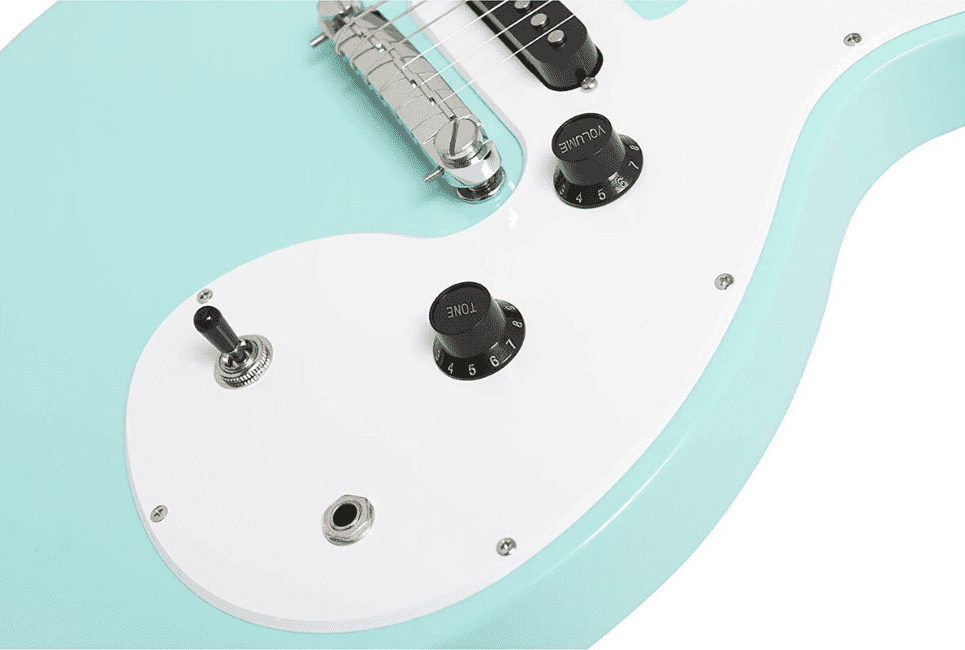 Firstly, I’m going to investigate the body of the Epiphone Les Paul SL. Guitars are very expensive to build, with high-quality wood and set necks costing a lot to work with, so Epiphone has cut some corners here to provide us with a budget Les Paul option. Rest assured though, because they still provided a high-quality and well-built guitar.

The body of the guitar is mostly made out of mahogany which ensures that it still feels great to use whilst reducing the cost significantly. The finishes all look great but come in a variety of colors depending on your personal taste. My personal favorite is the Vintage Sunburst.

The neck is connected through bolts as opposed to being set, which often sends red flags to seasoned guitars due to the limitation this will have on note resonance and sustain levels. However, remember that this is supposed to be a ‘first guitar’. You are simply not going to have to worry about the intricacies of sustain and resonance at this stage, and I doubt you will notice the difference for a while.

Finally, I wanted to mention the tuning pegs. There’s something a bit flimsy about them and I can’t quite describe it, but I think they are made out of cheap material. They work absolutely fine so I don’t really have a problem with them, but it was a minor cosmetic detail that bugged me when I first tried this guitar.

Having a guitar with a nice body and finish is all very good, but let’s be real here – the most important quality in the guitar is the tone. This is simply how the guitar sounds.

I was honestly shocked when I first used the Les Paul SL in a Guitar Centre because I was expecting so much less. For a guitar that costs around $150, it packs a serious punch in terms of tone. The guitar uses ceramic pickups which would not usually be my pickup of choice, but somehow Epiphone has pulled them off very well.

It’s an overall very balanced guitar tone, providing warm and woody timbres on the lower pickup with a quick pickup switch providing crisp and clear tones all around the bridge.

I will mention that the bolt-on neck removes a lot of the tonal quality that this guitar would have if it had a set neck. It’s really not important when it comes down to budget guitars, but just bear in mind that it will reduce the resonance and sustain of the guitar output. 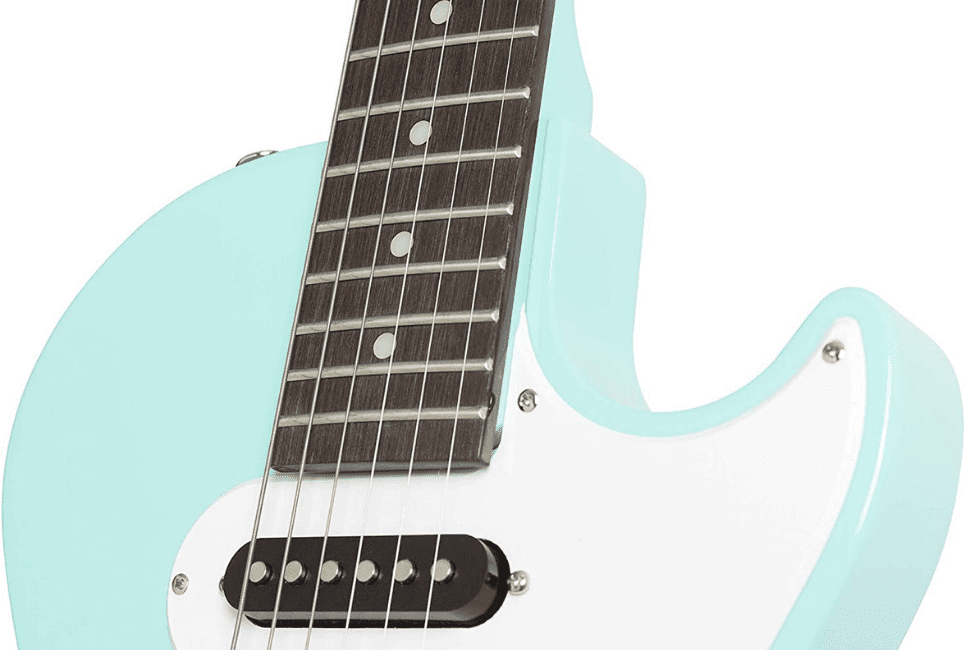 Learning to play the guitar will always require patience and persistence when it comes to practice, but it certainly helps if the guitar you are using is comfortable and easy to use. It’s been a long time since I was a , but when I tested out the Epiphone Les Paul SL, I was super impressed with its accessibility.

Unlike many other budget guitars, the SL is actually completely full-sized. Now, this may cause some issues for young children as the instrument will simply be too large for their hands, but anyone over the age of 10 should get on with it just fine. The fretting scale and neck size feels natural and doesn’t make any compromises, and I actually think this is a good thing. You want to learn how to play a real guitar, not a practice instrument!

There isn’t really much else to say – it’s a comfortable guitar that supports natural hand placements for beginners, so it’s no easier or more difficult to use than any other guitar. Once you have the guitar itself, you’ll simply need to plug it into an amp, choose a pickup and play!

The Epiphone Les Paul SL is undeniably an excellent choice for a first guitar, but it’s important to remember that there are alternatives out there. Let’s take a look at a few different electric guitars that might be of interest to you. 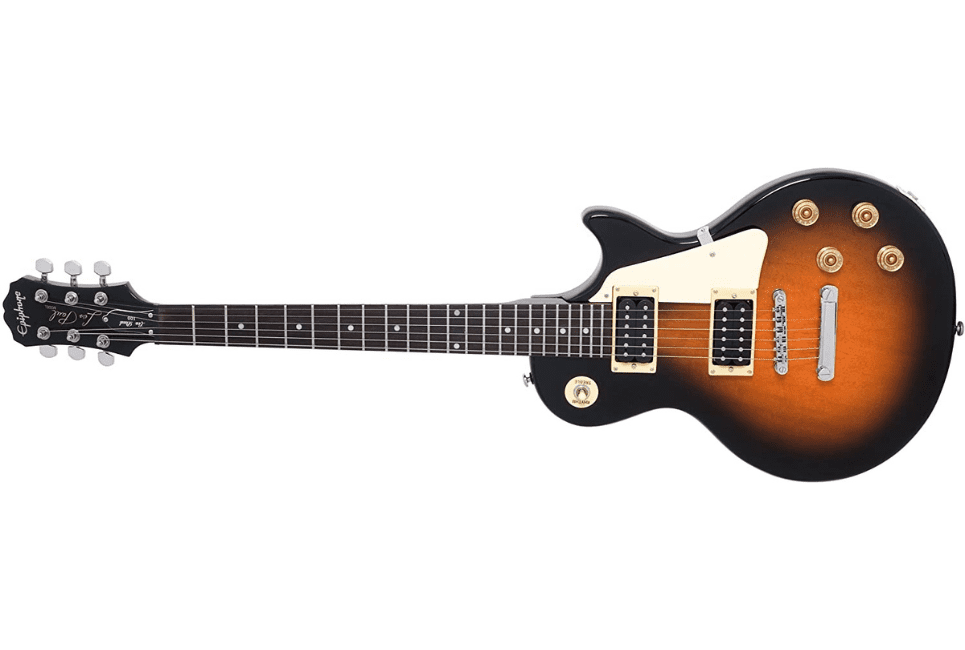 The Les Paul SL isn’t the only option available on the Epiphone range, with the company actually selling several different types. One of the most appropriate in comparison to the SL is the 100, a guitar that is not too dissimilar. The main difference is that the Les Paul 100 is around $50 more expensive, but it is constructed better, uses better electronics, and overall looks and feels more like a real Les Paul.

Whilst that additional $50 doesn’t feel like a lot, it’s important to consider whether this is still an option within your budget. However, if you have the extra cash to spare, you will definitely notice the difference in quality. 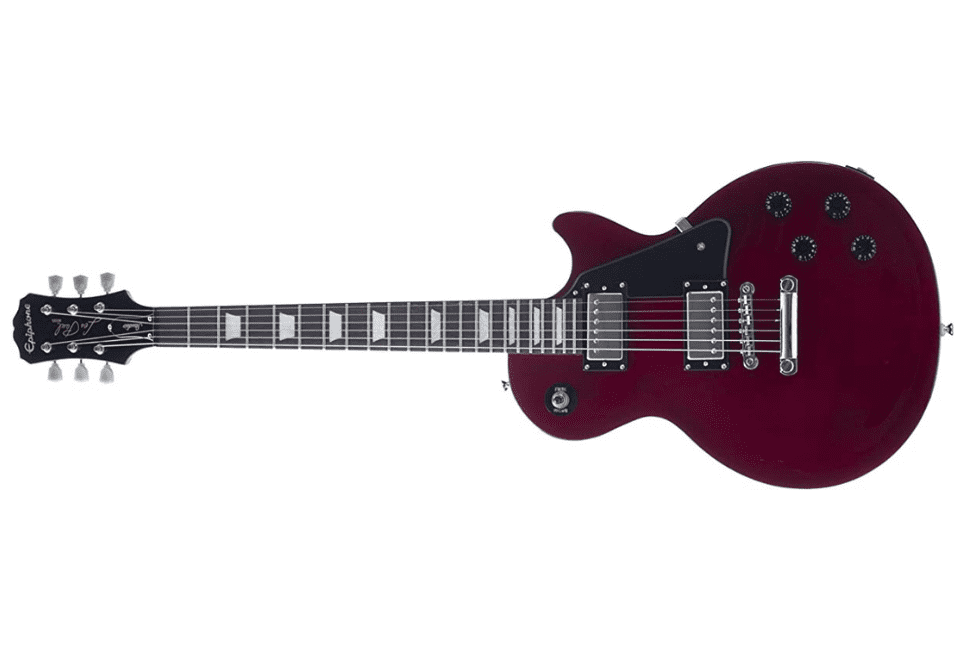 Some of you may be reading this thinking that you don’t fit into either price range – you’re not really looking for a budget option such as the SL, but you’re not looking to break the bank on a Gibson Les Paul either. If this sounds like you, I’d recommend you check out the Epiphone Les Paul Studio.

This guitar takes things up a notch costing around $450, but the guitar quality is an equally significant step up. The guitar neck is set as opposed to the bolt-on necks in the SL and 100, resulting in a tone that sustains and resonates much better. The guitar also uses open-coil Alnico Classics pickups as opposed to the ceramic pickups of the 100 and SL. It also just looks so much better than both the SL and the 100 combined, a lot more care and thought has been put into the guitar.

I wouldn’t recommend this as a as it’s still a lot of money to spend on an instrument when you haven’t fully committed to learning the guitar yet. However, if you’ve been playing on a for a couple of years and are looking to buy a moderately priced Les Paul, the Studio edition could be exactly what you’re looking for. 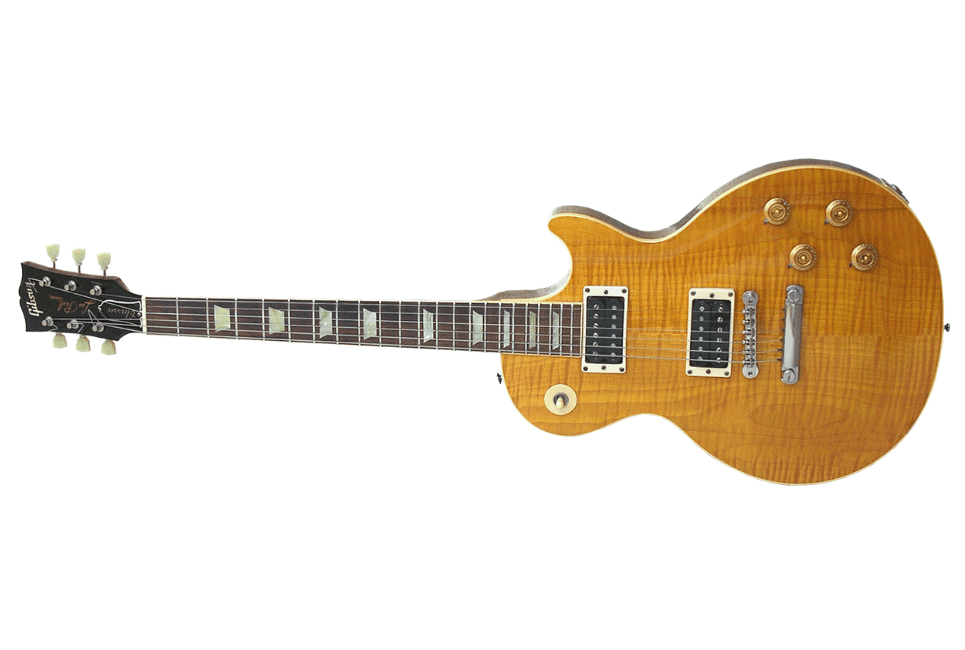 Let’s be real here – you probably are not in the market for a Gibson Les Paul if you are reading a review for an Epiphone Les Paul SL, but it’s important to dream big. We love the Epiphone clones of the original Les Paul guitars, but they simply do not compare in the quality – or the price.

This might blow your mind, but many Gibson Les Pauls sell for over $10,000! You can obviously find them cheaper, but the overall price isn’t going down any time soon, so if you want one then it’s better to act sooner rather than later.

So, start saving those pennies. It might not be a sensible option to go for a Gibson Les Paul right now, but plan five or ten years ahead, and you might just be able to get one!

Now that we’ve looked at the Epiphone Les Paul SL electric guitar in detail, you might be indecisive as to whether you’d like to purchase one or not. That’s totally understandable as I covered a lot, but as an expert in electric guitars, I’m going to break down some buying tips for you.

You should consider first whether this is the guitar for you – if you’re a seasoned guitarist then it might not be a necessary purchase, but if you’re just beginning your journey then it’s an excellent .

The best thing that you can do is try the guitar before you buy it, and one of the best ways to do this is to turn up at your local Guitar Centre or another guitar retailer to test one out. They’ll usually provide you with an amp, so make sure you bring an attentive ear so that you can check out that sweet Les Paul tone.

If you’ve made the decision that the Epiphone Les Paul SL is the guitar for you, you can choose to either buy the product online or at a retailer such as Guitar Centre. Personally, I have always preferred to purchase a guitar in store as I can ensure that the box is handled with care. However, online deals can often be discounted or come bundled with additional accessories.

Finally, if you’ve pulled the trigger and bought this guitar, I wish you the best of luck on your guitar journey. It took me years of practice to get to where I am today as a guitarist, but with persistence and hard work, you’ll be shredding that Les Paul in no time!

Question: Is the Epiphone Les Paul SL Suitable for Beginners?

Answer: This guitar is absolutely suitable for beginners – it includes all of the essentials to fuel a ton of guitar shredding sessions, yet at an affordable price for beginners on a budget.

Question: What Pickups Does the Les Paul SL Use?

Question: Is a Les Paul SL the Only Option in Terms of Les Paul Clones?

Answer: Absolutely not – there are many different Les Paul guitars that have been developed by Epiphone for different budgets, including the Les Paul 100 and the Les Paul Studio.

Question: Is the Epiphone Les Paul SL as Good as the Gibson Les Paul?

Answer: Unfortunately, no – the Les Paul SL represents a low-cost version of the original Gibson Les Paul, and therefore it will never sound, look or feel quite as good as its Grandfather.

Overall, my first play with the Epiphone Les Paul SL left me feeling pretty impressed. I’ve been playing the guitar for years now and must say that this would be the cheapest guitar in my collection, but it just goes to show how much value one can get for just $150.

The guitar essentially finds a perfect balance between being cheap and affordable yet also high-quality and enjoyable to use. The old myth that “a cheap guitar is a bad guitar” has been absolutely disproven, in my opinion.

I wouldn’t exactly recommend it if you have been playing the guitar for years, but if you’re looking to start your guitar journey, the Epiphone Les Paul SL seems like a great place to start. Who knows, maybe if you practice hard on it, you will be able to afford an original Gibson Les Paul in the future!