When shopping around for a new guitar or having your guitar custom-built a luthier, the most commonly overlooked feature in the buying process is the type of material used in the creation of a guitar.

Many musicians, especially beginning guitarists, are under the impression that the type of wood used in the creation of the fretboard doesn’t have a drastic impact on the overall tone of the guitar, but this thought process isn’t entirely true. Today I reveal you all the “secrets” when it comes to choosing the right guitar fretboard, and specifically tell you more details about maple vs rosewood fretboard.

Why is choosing the right fretboard important?

While the type of wood used in the fabrication of the guitar fretboard does have an impact on the overall tone of a guitar, the kind of wood is used for a fretboard has a greater impact on the overall feel and playability of an instrument. You can spend a lot of time and money investing in an instrument that has an amazing sound, but you’re not going to want to pick it up and play it if the fretboard isn’t comfortable to hold or play on.

If you’re really looking for a guitar that you enjoy playing as much as you enjoy listening to, it’s very important that you spend some time researching the different types of woods that are used in the creation of fretboards and the relationship those woods have with the playability of an instrument. As always, we recommend going to a guitar shop to test out different fretboard types to get a better understanding of the different relationships that you have with individual wood types.

The most commonly used wood used in the creation of fretboards are Maple and Rosewood, as there are perceptible differences in how both wood fretboards affect how a certain style of music or piece of music is played.

With all of the basics covered, let’s compare the two most commonly used fretboard tonewoods to see if one wood is better than the other!

Its creamy, natural white color can identify the use of a maple fretboard, but if you’re more familiar with the of historical guitars, maple fretboards are commonly used on the Fender Standard Telecaster and the Stratocaster models.

There are two different species of maple that are used in the creation of maple fretboards; silver maple and hard maple. While there are several differences between the two species of maple, both of these woods are sturdy, hard, and make wonderful material to use for fretboards.

Hard maple is heavier and harder than silver maple (AKA soft maple) but does tend to be a lot more expensive than silver maple is. Hard maple is often used by Paul Reed Smith, Fender, and Charvel, so if you’re specifically interested in using a durable maple fretboard, you may want to start looking in this area.

On the other hand, silver maple is a lot easier to find and isn’t as expensive because of how readily available it is. Models that are produced in Indonesia and China typically sport silver maple but don’t let that make you think that guitars that have silver maple fretboards are of poorer quality than guitars that use hard maple.

What are the different hard maple grain configurations?

Are maple fretboards easy to play?

If you’re absolutely obsessed with having a maple fretboard, it’s entirely possible to remove the finish on the fretboard before you begin playing. However, this is a costly measure of maintenance and can lead to excessive wear on your fretboard, leading to a need for an earlier replacement. There isn’t a specific style of music that is less or more suitable for musicians who play on maple fretboards, as the relationship that a musician has with the fretboard comes down to their specific playing style, technique, and what they feel comfortable playing on.

If you’re an experienced musician who is contemplating switching over to a maple fretboard, be prepared to enjoy the speed you can build up when traveling up and down the maple neck, but also be prepared to notice a lack of control that you may feel when attempting to bend your notes (due to how slick the finish on the fretboard is).

How do you take care of a maple fretboard?

Due to the finish on maple fretboards, the upkeep on a maple fretboard isn’t too challenging. Wiping down your fretboard with a dry cloth after every time you’re finished playing (or every few hours if you’re playing for a long time) will get rid of any buildup of finger oils that can eat through the finish.

Every couple of weeks, you should wipe down your fretboard with a slightly damp rag that has some dish soap on it to get rid of any residual oil or residue left by your fingertips; make sure that the neck and fretboard are completely dry before you store your guitar away again.

After wiping your fretboard down with steel wool, you will want to use a soft cloth that has been dipped in Tung oil finish to polish the surface of your fretboard.

Pros of using a maple fretboard

Cons of using a maple fretboard

The use of Rosewood in stringed instruments has been around a lot longer than Maple fretboards have been, as Rosewood has also been used for the sides and backs for lutes, mandolins, and violins. It’s easy to spot what guitars have Rosewood board by the dark red-brown hue but is also commonly found on Paul Reed Smith, Ibanez, and Gibson guitars.

What are the different types of Rosewood?

In guitar manufacturing, the most commonly used breeds of Rosewood are:

Are Rosewood fretboards easy to play?

Regardless of the species, Rosewood is an open-grained wood, which isn’t as smooth-running as Maple in ample boards. The strings on a Rosewood fretboard tend to be a lot easier to control when attempting to bend the strings. If you’re someone who is more interested in manipulating your guitar strings with certain playing techniques, you may find that it’s easier to control what your strings are doing on a Rosewood fretboard.

How to maintain a Rosewood fretboard?

The process of maintaining a Rosewood fretboard is very similar to the steps that you follow to maintain an unfinished Maple fretboard, such as wiping down the fretboard with a dry cloth after a few hours of playing or after every playing session.

Pros of using a Rosewood fretboard

Cons of using a rosewood fretboard

Is a Maple fretboard better than a Rosewood fretboard?

In this situation, there is no right answer, as what type of fretboard works for one guitarist may not work for another musician. It’s completely up to you to figure out what wood type feels better in your hands. Here’s a quick glance at what Maple fretboards have to offer and what Rosewood fretboards have to offer as a comparison, just in case you were looking for a quick glance.

Which fretboard wood should I choose?

As we talked about earlier, when it comes to choosing your guitar, the tonal production that the fretboard assists in shouldn’t be your only focus when looking to buy a new guitar. While the fretboard totally has the ability to influence the tone of your guitar, the tonewoods that are used for the body and the neck of the guitar are what have the biggest influence on a guitar’s tonal production.

So, forget about thinking that you need to choose a tonewood based on what sounds good and start thinking about picking out a fretboard that feels good in your hands. Both woods have their own unique properties, respond to touch differently, and respond to wear differently, which is why you’ll have guitarists rooting for one wood over the other on both sides.

You should choose a guitar that feels good in your hands because that’s how you’re going to grow your relationship as a musician. If you choose an instrument that sounds great but doesn’t feel comfortable in your hands, you’re never going to want to play.

It’s incredibly important that you do your research and test out different types of fretboards, so you know what works best for you. Don’t forget that appearances matter too, so make sure that when you’re ready to say ‘yes’ to a guitar, that you think that the guitar you’re about to commit to is physically appealing.

This is a modern Telecaster with the same classic shape it had in the '50s! Covered die-cast chrome machine heads provide tuning stability unheard-of in this price range.

Its alder body in the classic Dinky style is dressed in either a lustrous Orange Crush or a no-nonsense Matte Army Drab satin finish. 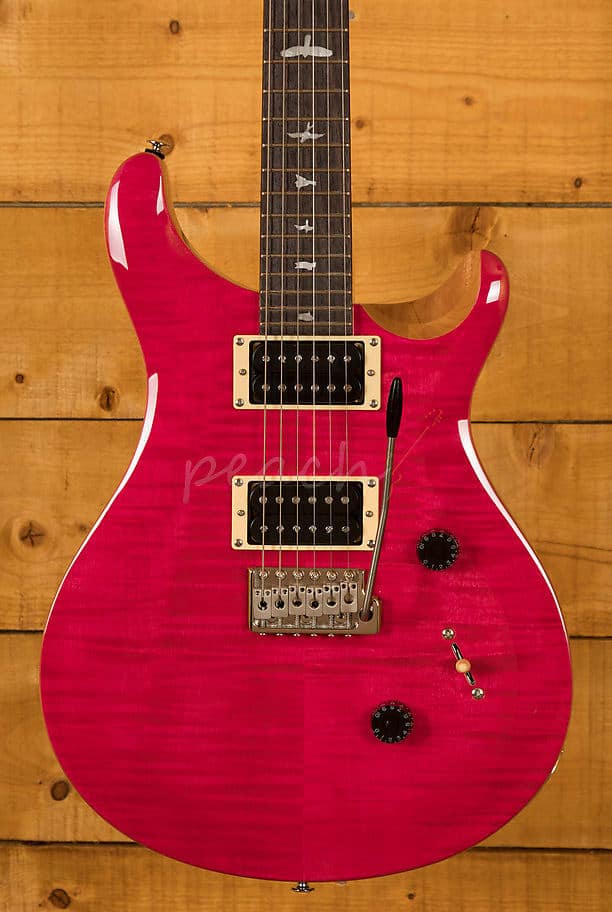 The SE Custom 24 pays homage to the guitar Paul Reed Smith took to his first tradeshow in 1985 and is now offered with a Floyd Rose 1000 Series tremolo.

FAQs About Rosewood vs Maple Fretboards

How do I take care of rosewood fretboard?

The best way to take care of a rosewood fretboard is to apply oil to it (preferably mineral or almond oil) and spread it all over it. Next, wipe the excess oil with a dry cotton towel and you are all set.

What not to use for cleaning my rosewood fretboard

No matter if you have mahogany, maple, rosewood, or ebony fretboard, the things you should never use for cleaning are water or lemon, since they can build up in the corners and rot the wood over the time.

Will my maple fretboard change over the time?

Yes. You may have noticed that the fretboard on your guitar is a bit darker than on the day you bought it, so the reason for the darker hues are because your guitar has been exposed to UV light and oxigen.