This guitar is highly reminiscent of a guitar by Gibson and its Epiphone counterpart.

While Epiphones are one of the cheapest semi-hollow bodied guitars (semi hollow) around, and Gibson make professional level ones, the family of brands has a gap in terms of instruments for intermediate players.

While not having as much recognition as other brands, D’Angelico guitars has actually been working away out of Manhattan since 1932, and their original models are extremely well regarded, counting Eric Clapton and Pete Townsend, Seymour Duncan, the Grateful dead (for a while) amongst fans. The brand relaunched in 2011, and currently has operations in the USA (owned and operated) and in the east. 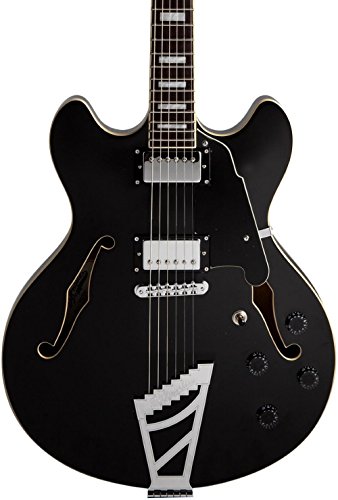 Is the D'Angelico Premier DC Worth it?
The Premier DC is a GREAT guitar for intermediate players, who are looking for versatility and a platform to experiment with different play styles and genres.
Check Price
We earn a commission if you click this link and make a purchase at no additional cost to you.

As this type of guitar goes in the premier range, the features are actually pretty standard – Dangelico guitars have everything you’d expect in terms of parts and construction. Laminated maple is flavor of the day: it’s used for the top and back, the centre block, and the neck.

Nothing particularly groundbreaking, but I am curious to try out D’Angelico’s humbuckers.

Unusually for an intermediate guitar, the Premier DChas a number of options available. Besides three colors to choose for a finish, you can also choose to have a regular stopbar tailpiece, rather than D’Angelico’s Stairstep one, or you can choose to have it without f-holes, a la BB King’s Lucille.

Semi hollow body guitars are wonderfully versatile, so this will work well for pop, rock, blues, country and jazz.

I could also imagine some metal or hard rock guitarists going for it – semi-hollow guitar plus high gain amp equals dramatic feedback machine! It’s also nice and light for such guitarists to run around onstage.

This is a win for intermediate players, who might be still developing their playing style to refine what they want, or who are playing a range of styles to keep their playing versatility on form. It would complement a single coil guitar nicely.

Even though it looks relatively ornate as guitars go, at its heart is everything a good guitar of this kind should have.

So let’s put it through its paces. 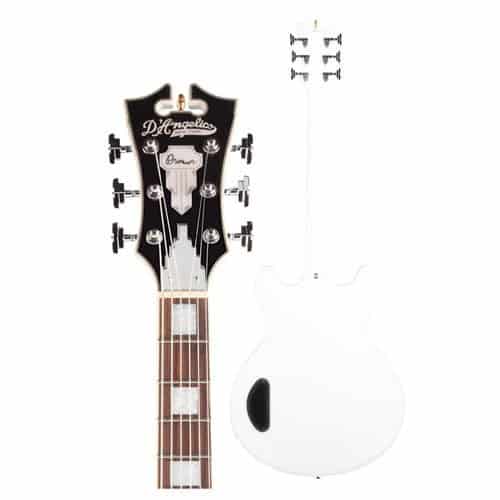 Looking at the parts of this guitar, everything seems like it’s in fine order.

The liberal use of maple in the Premier is pretty much standard for such guitars, so its presence here doesn’t come as any surprise.

Although the likes of the Stairstep tailpiece can create a moment of being blinded by shiny pretty things, it’s important to remind yourself that aesthetics aside, it has a job to do. It looks solid and well attached.

The Premier has a rosewood fingerboard perched on its maple neck. It looks clean and has some tidy looking cream binding. The block inlays look the business – I always find it to be one of those subtle design point that adds an inexplicable touch of class to a guitar.

You can’t help but notice the headstock, with its ebony veneer.  The machineheads are D’Angelico’s own, with the Stairstep design, similar to the tailpiece. The truss rod cover is stylized as a skyscraper headstock. Overall, it’s a pretty ornate headstock!

Satisfied with how the parts of the guitar look at surface level, it’s time to have a closer inspection to see how they were all put together. It would be a shame for such a fine looking guitar to fall over itself with shoddy construction.

I always go straight for the neck joint when investigating the quality of a guitar’s construction. The Premier’s looks absolutely fine. It doesn’t look like it was forced in, and there are no blemishes to the finish.

The electronics look pretty well-secured – the workmanship looks neat and tidy. The neck is straight and even. The fretboard fretwork looks good, and the block inlays are cleanly embedded.

It might sound snarky, but in guitars at a good price like this, with looks like this, I feel I have to remind myself to look beyond aesthetics!

So far, so good. The Premier seems to be following the contemporary standard of applying high quality parts and production methods to Eastern guitar-building to create an iconic-looking, but affordable guitar.

Full disclosure: this is my favorite type of guitar to play, and I’m incredibly excited to make noise with the Premier!

In trying to provide the most helpful review, I wanted to plug into an amp most likely to be used by an intermediate player who might own this guitar. I opted for a 50 watt, hybrid, 2×12 combo amp.

It seemed about right: the intermediate player will understand that getting the most out of your guitar tone requires a better amp than the solid state they likely learned on, but they may not be able to justify the price tag of a valve amp.

It’s always useful to have a test play of a guitar before you even plug it into the amp at all. It will identify any core issues with the guitar. I got the littlest bit of fret buzz from the Premier, but it’s really nothing a professional set up won’t eliminate.

The unplugged play also gave an indication of the sounds that lay ahead, and they were very promising. As a general rule of thumb, if you don’t like the sound of an electric guitar when it’s not plugged in, making it louder with an amplifier won’t help.

Playing through the clean channel, with the bass at four, and the middle and treble each at six, you couldn’t help but a little bit fall in love with the tone. Especially with both pickups, or the neck pickup, the warmth of the maple rings out.

Chords sound bright and full, and cranking the volume a little, the cleanliness of the tone starts to break slightly, and you’re heading into blues territory.

Switching things over to an overdrive channel, with the gain dialed in at six, and D’Angelico’s humbuckers do a stand-up job. The bridge pickup is a bit trebly for my personal liking. Selecting both pickups is definitely my favorite – I feel like I can comfortably do anything from there with chord degrees: open chords, power chords, solos…

The best thing about considering the playability of the Premier DC is discovering that it’s not just a pretty guitar.

The parts and construction are just right and combined with the tones, creates a guitar that will have any intermediate player continually reaching for it. The neck shape is very comfortable and feels like it would be a good balance for a wide range of playing styles and sizes of guitarists hands.

There is a distinct touch of class compared to instruments in a similar style, but in saying that, you know you’re a bit away from a professional level instrument.

With a guitar like this that can play a lot of different styles, a major contributing factor to its playability is the amount of time that can be spent exploring the range of tones, and how they can be applied to various styles of music.

Pros and Cons of the Dangelic DC Premier

If for any reason the Premier isn’t quite what you’re after, but it’s in the general ballpark, there are a few alternatives to consider that might be a better fit.

First up is the Ibanez’s AS153 from its Artstar range. Despite being a name synonymous with Superstrats, This is also a maple-heavy instrument, but with a maple and mahogany ply neck. A key distinction with this guitar is that it has an ebony fingerboard. Nice.

It also comes in an Antique Yellow Sunburst finish, which shows off the gorgeous flame of that maple. The AS153 includes Ibanez’s own Super 58 pickups, which are intended to provide a particularly old-school, bluesy vintage feel to its tones. 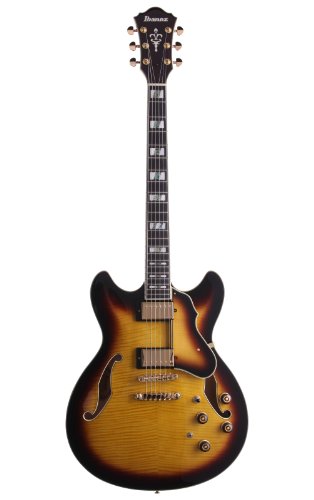 Ibanez AS153AYS Artstar Semi-Hollow Electric Guitar, Antique Yellow Sunburst Finish Check Price
We earn a commission if you click this link and make a purchase at no additional cost to you.

If the price of the D’Angelico is just a little bit out of reach, the higher end of Epiphone’s similar one would be the Casino [link to website]. With classic stylings and a Beatles association, the Casino comes with a mahogany neck and a rosewood fingerboard.

One thing to note about the Casino is that it’s a true hollowbody guitar – the others mentioned have a solid block running down the middle. Not the case here, which leads to a much lighter instrument. The Casino also has a slim taper neck, which gives an unusual feel to the instrument, but not a negative one.

Epiphone CASINO Thin-Line Hollow Body Electric Guitar, Vintage Sunburst
$699.00
Check Price
We earn a commission if you click this link and make a purchase at no additional cost to you.

And finally, the Gretsch G5622T-CB Electromatic has similar stylings to the other guitars but with some mad cool stuff going on! There are two super-obvious things here: firstly, there are three pickups; and secondly, it’s fitted with a Bigsby vibrato unit.

This Electromatic has a maple neck and rosewood fingerboard.

Gretsch G5220 Electromatic Jet BT Jade Grey Metallic w/V-Stoptail & Black Top Broad'Tron Pickups
$599.99
Check Price
We earn a commission if you click this link and make a purchase at no additional cost to you.

D’Angelico may not have as much brand-clout as other names, but in guitar manufacture terms, the six years since their relaunch isn’t a long time at all, and I expect to see a lot more about them going forward.

I would recommend the Premier DC for intermediate players who need or want versatility from their guitar, whether it’s for experimenting or playing a variety of styles.

Is the D'Angelico Premier DC Worth it?
The Premier DC is a GREAT guitar for intermediate players, who are looking for versatility and a platform to experiment with different play styles and genres.
Check Price
We earn a commission if you click this link and make a purchase at no additional cost to you.