Are you looking for the perfect gift for your little one this holiday season?

You may have recently stumbled upon Loog guitars. Loog guitars are how to use a teach your children to play guitar, without having to invest in a 3/4 size instrument. However, is a Loog guitar any good, and is it worth the investment?

The Loog guitar Comes with speakers, built-in amplifiers, apps, and flashcards to teach children how to play songs and form chords on their instrument.

As new Loog guitar models are hitting the market, more and more parents wonder if the Loog guitars are really the right choice to make to introduce their children to play an instrument. The Loog Mini, Loog Pro, and Loog Pro VI teach children from the age of three up to the age of 12.

But, are Loog guitars really worth the investment?

This ultimate guide will break down the Loog guitar and show you if it’s really worth the investment. Keep reading to learn more!

What’s the build of the Loog Guitar look like?

When you first take a glance at the Loog guitar, the first thing that you may notice is the physical difference in this guitar. Let’s take a closer look at the building of the Loog Guitar:

The Loog Guitar body and neck don’t have the same structure that a ukulele does, despite having a similar appearance.

The body of the Loog Guitar has a similar size body as a concert ukulele. however, you’ll find that the first of three strings for both the strength and tuning is that a similar appearance to a 6-string guitar buried

The idea behind the three-string Loog Guitar is that once the beginning a musician has enough experience in confidence in the three strings on their mini guitar, they’ll know to implement into playing a full-sized six-string guitar. 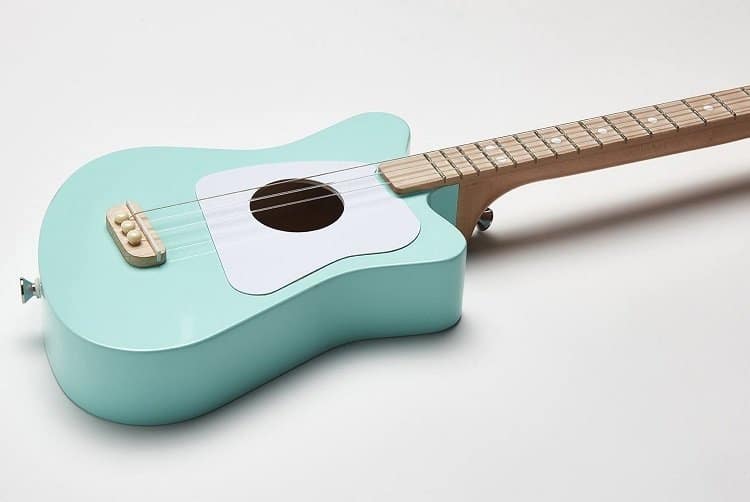 A guitar’s construction is good quality, but it isn’t anything spectacular that you should expect out of a high-end guitar. However, it does have enough robustness to stand up some minor abuse from an enthusiastic beginning musician.

The guitar’s appearance is similar to the Retro 1950s Style body that many musicians think of when they imagined a good heart. You can choose between white, red, green, or pink finishes.

This will allow your child to have an easier time wrapping their small fingers and hands around the entirety of the fretboard. Plus, your child will easily be able to form chords without putting any strain on the wrist or hands.

You will find three open-gear tuners at the top of the guitar that has white and buttons. This will be complemented by a smallish wooden bridge that will make the tuning for this guitar stabilized. 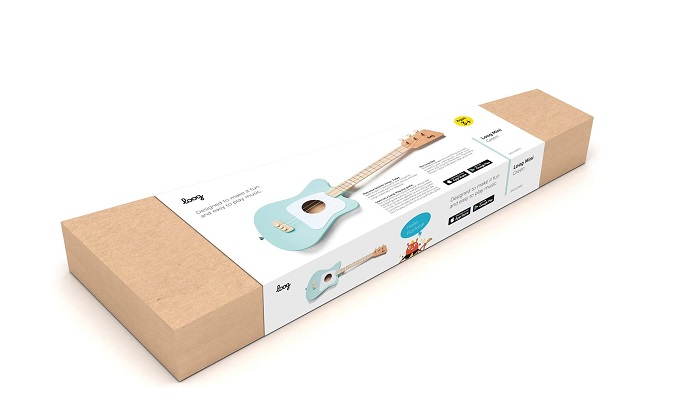 Plus, you will find classic guitar strings, which are nylon base, on the Loog guitar. These nylon bass strings make it a lot easier for beginning musicians to start playing guitar because these nylon strings are less softer on the hands.

One of the nicest finishing touches to the Loog guitar is that the purchase comes with flashcards that show chord diagrams. These chord diagrams make it easy for small guitarists to learn a few quick to play chords that will make their entire burning experience encouraging.

Another nice touch that comes with the Loog guitar is that it has a decent sound to it. Keep in mind that this is a guitar meant for children, so there aren’t any complex overtones that this guitar is able to produce.

Also, you shouldn’t expect there to be a large sound like one for this instrument, especially because of this instrument’s size. Surprisingly though, it does develop a sound that very similar to that of a classical guitar.

There is a decent amount of clarity and volume from a Loog guitar, with a much more balanced tone than many experience guitarists may be anticipating.

Keep in mind that the Loog guitar isn’t going to sound as full as a regular concert guitar. This is because of the instrument’s size, so it shouldn’t be a cause of any concern.

This is a very easy instrument to learn guitar on. As mentioned above, the neck is very thin, which makes it easy for children of all sizes to wrap up their fingers around the entirety of the fretboard. Plus, the instrument’s body is small and lightweight, perfect for the smaller stature of a child.

Thankfully, the Loog guitar is small and lightweight, so even children with a smaller stature shouldn’t have difficulty holding the instrument. 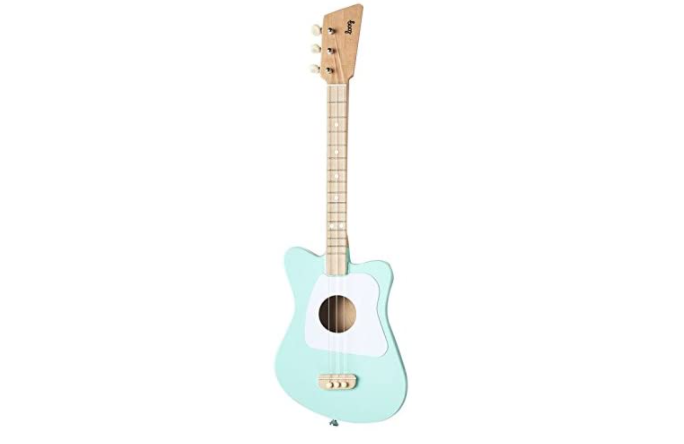 If you’re still unsure if the size of the Loog guitar would be too large for a child, see if your child feels comfortable holding on to the ukulele.

Both a ukulele and Loog guitar are similar in size, so this will help you to get a better understanding of if your child will feel comfortable or not before you make your investment.

Playing the Loog guitar isn’t very different from playing the traditional guitar that you can pick up at your closest guitar store. Instead, it makes the three-string guitar concept a lot more straightforward because it doesn’t have the extra strings that come with a traditional guitar.

Once your child understands and a mastery of the three guitars that come on the Loog guitar, it’ll be easier for your child to move on to the concept of larger size instruments.

Is a Loog Guitar worth the purchase?

For those parents looking to invest in an instrument that will introduce their young children to the world of guitar and music, the Loog guitar is a great investment to make.

Even though that is true and only has three strings, you’ll get a basic yet fun instrument that your child will benefit from using. Plus, it won’t put a massive dent in your wallet.

Over time, your child will outgrow that instrument, so it’s important that you don’t, and that’s a lot of money into a guitar that they’re just going to start out on.

The instrument’s buildup is pretty adorable, so you won’t have to worry about the instrument breaking if it gets a few dents and bangs in it.

Do you feel like there may be a better option for an instrument for your child? We’re here to show you a few other Alternatives you may want to consider if you feel like Loog guitar isn’t the best option.

Let’s take a closer look at the best alternatives:

This Makala MK-S Ukulele doesn’t have the same fun color schemes that many toy shop level ukuleles come with. 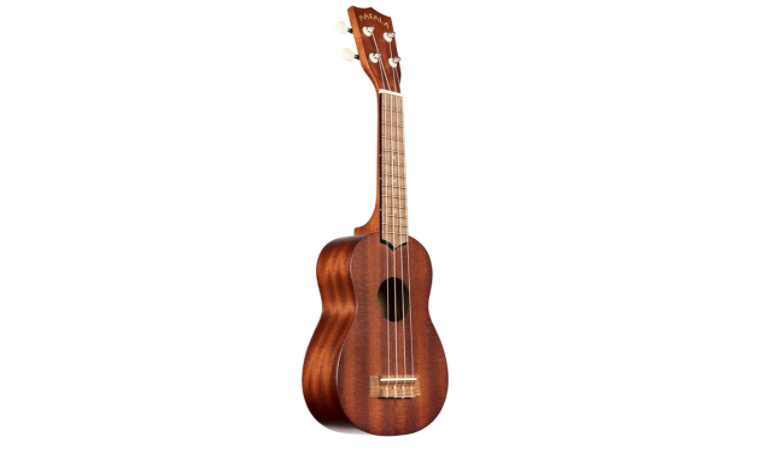 However, this is because Makala has focused on dedicating time and effort into developing this ukulele to develop a high-quality sound.

You can play a 4-string Accord on this instrument with no problem.

Since this has the same shaping necessary for a child to learn how to play guitar, you may want to consider giving it to a small child or a toddler that’s interested in learning how to play. 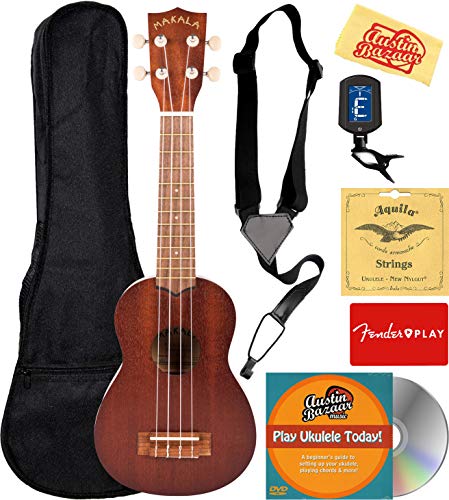 Makala MK-S Entry Level Soprani Ukulele Buy Now Learn More
We may receive compensation from the companies whose products we review. We only recommend products that we believe in and test.

This Yamaha Acoustic Guitalele is a combination of a guitar and a ukulele. 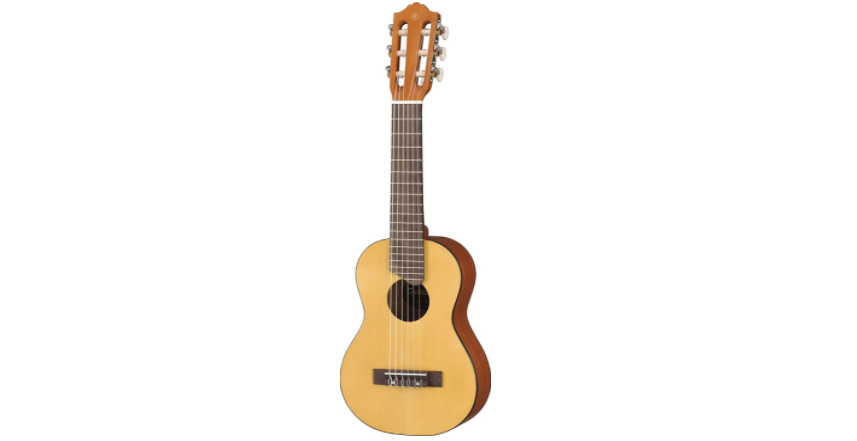 This is a quarter-sized instrument, which basically just means that the neck of the stringed instrument is shorter than what you would find on the average guitar.

This stringed instrument still has six strings on it. However, the tuning is similar to that of a ukulele.

If you are looking to start your child off with the skills they need to translate into a full-sized instrument, this Yamaha Acoustic Guitalele is the perfect size for a small child.

If these options still don’t fit best with what you’re looking for for your child, you may want to consider looking into three-quarter or half-sized guitars.

The sizing of these instruments will depend on the size of your child. 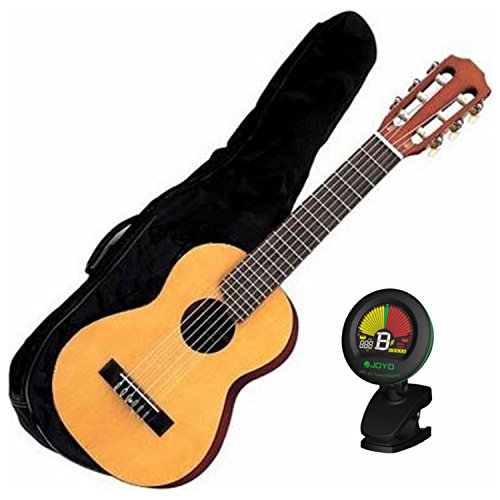 Yamaha Acoustic Guitalele Buy Now Learn More
We may receive compensation from the companies whose products we review. We only recommend products that we believe in and test.

Question: Can you play any song on a Loog guitar?

Question: Can only children play the Loog guitar?

Answer: No, anybody of any size or age can play a Loog guitar. Playing three-string guitar is great for children to start off on because of the size of the instrument in the hands of children. However, anybody who wants to learn to play the guitar can start off with a Loog guitar.

Question: Can a child learn on Loog guitar and still learn how to play a six-string guitar later on?

Once you have the core concept of where to hold your guitar and the finger placement on a three-string instrument, you can translate the same concept of applying a 6-string traditional guitar.

Question: How do you tune a Loog guitar?

Answer: It would help if you tuned a Loog guitar from low to high. If you have musical experience, you should tune a Loog guitar G, B, E.

The Loog guitar uses the same first three strings and tuning as a traditional six-string guitar. This is why you can take everything that your child learns playing on Loog guitar to a standard six-string instrument. Of course, you can experiment with other tuning options, such as Oopen G or Open A later on down the road.

Answer: At this moment, Loog guitar doesn’t offer left handed options. However, if you’re interested in teaching your child how to play a left-handed guitar, you can flip the strings order to make it work.

Question: Is the Loog guitar only availbale in acoustic?

Answer: No, you can also look into the Loog Pro electric guitar.

Understanding the bottom line for investing in a Loog Guitar

However, the Loog guitar is a playable guitar that’ll truly help teach your child how to play the guitar.

Have you purchased a Loog Guitar for your child to learn how to play guitar on? We’d love to hear your thoughts or opinions in the comments below!

Orangewood Guitars Review [2021]: Are They Worth Buying?

Martin DRS2 Review 2021 — A Martin for Players on a Budget

Best 1/2 Size Guitar: Top Picks and How To Find The Right One

Taylor vs Martin Guitars [2021]: Which Brand Is The Best?

3/4 Guitar vs Full Size: How to Choose the Right One?

Gibson Dove vs Hummingbird: Which Model is the Best For Your Needs?