The electric guitar would not be this popular if not for Jimi Hendrix and his revolutionary playing. We can all agree that Jimi’s contribution to guitar is massive, and his style, tone, gear are replicated massively. As a massive Jimi fan, I want to guide you with this article through Jimi Hendrix string gauges – often overlooked but very important to fully understand his legacy.

The life and work of Jimi Hendrix speak for themselves, and just the fact that he is often considered the greatest electric guitar pioneer of the 20th century says much. Before diving into the very detailed subject of string gauges, you should be introduced to his main gear.

Apart from the playing, most of his tone is due to the bright and snappy nature of his Fender Stratocaster combined with the FX he used to pioneer the use of feedback, fuzz, and distortion.

What String Gauges did Jimi Hendrix Use? 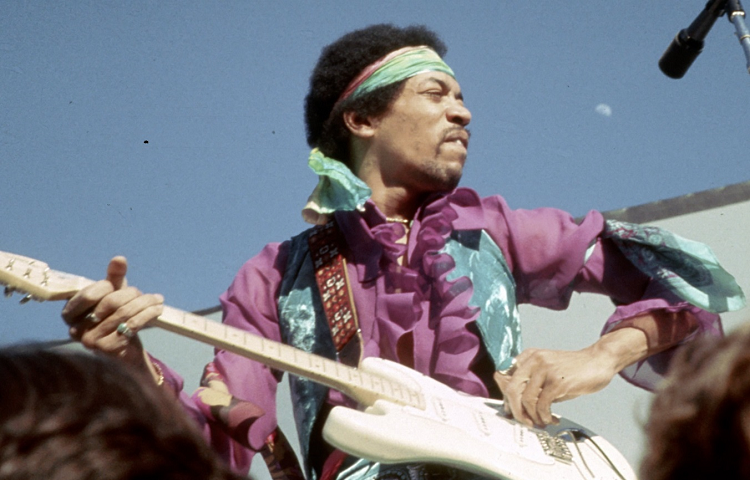 His guitar tech Roger Mayer said about his string size in a Guitar World interview:

We should remember that Jimi used a standard right-handed Strat but flipped the strings to make it left-handed. This means the low E string was where the high E string should be, resulting in less overall pressure on the neck. He also tuned to Eb flat. We can easily assume that Jimi’s action was pretty low, and bending was easy.

You immediately notice that the higher string are standard while heavier ones are very light. Today, a typical set of strings with a .010 high E string would have a 0.42 – 0.46 low E unless you specifically choose the gauge. Today’s string manufacturers offer many alternatives to choose from, with smaller brands offering customized packs.

Another lesser-known fact is that Jimmi Hendrix might have used RotoSound strings before switching to the Fender ones.

While being interviewed in 1992, founder and chairman of RotoSound, James How stated,

“When musicians were looking for a specific sound or concept, they would come visit me at the factory. Jimi Hendrix was not pleased with the sounds he would get when he bit his strings, so I developed a gauge which he thought ‘tasted’ right. The .006 and .007 were the first strings he used to bite that sounded ‘right’.“

Back in the day, light strings were the standard as many guitarists of that period. Eric Clapton and BB King, and many others used very light gauges, sometimes even 8s for the high E. The trend of bending strings heavily started the need to have light strings. There’s a story of British guitarists of the 60s purchasing mandolin strings until electric guitar string manufacturers caught up with the trend.

We can take out all the different stories about Jimi Hendrix String that light gauges are the way to replicate the tone and feel.

How Does String Gauge Affect Tone?

It’s essential to understand the differences gauges have on the tone before using similar strings as Jim Hendrix did.

There are many myths or misunderstood aspects of string gauges that players often tend to insist on. Having experimented in the studio with many string gauges on different guitars, researched online, and even asked other professional guitarists, I want to help you understand how they truly affect the tone.

The relation between tone and gauge is still widely discussed among guitarists of different genres as depending on the guitar, genre, and playing style, the same string gauge can sound very different. Beyond the many myths, some basic principles are commonly agreed upon by guitarists.

Thicker strings might help you cover more sonic ground if you’re a solo performing singer-songwriter. If the bass guitar covers the low end of the music, thinner strings could sound better in the mix. Jimi Hendrix falls into the second category where he did not have to worry much about the low-end.

The main thing to remember is that a good guitar with poor strings can sound ok, while a bad guitar with excellent strings will still sound poor. Thicker or thinner strings will not affect the overall shape and quality of the guitar’s sound. String wounding, whether it’s nickel wound or pure nickel, might affect tone more than their gauge.

A considerable part of the difference in tone is caused by the change in playing dynamics that players instinctively apply for different strings gauges.

Will a Similar String Gauge Help me Get the Jimi Hendrix Tone?

I will immediately say that it might help you by putting you in a similar situation as Jimi when he played his strat. Many other factors related to playing and gear come before string gauge when trying to emulate a tone.

I can assure you can recreate a similar tone with a standard string pack, budget gear, and the proper knowledge. Jimi’s rig was not complex, and the main element that made up most of it was his Stratocaster. Putting the same string gauge on Les Paul with not make the guitar sound bright and snappy due to the warm nature of humbuckers and P90s.

How Does String Gauge Affect Playability? 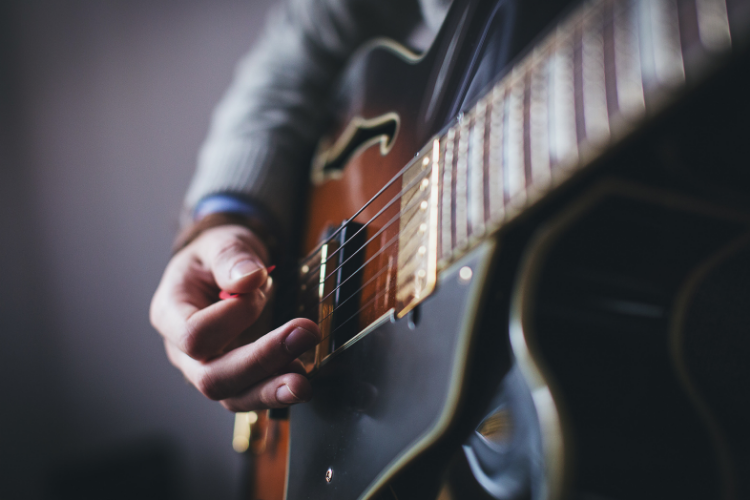 Fortunately, the answer to this is more straightforward, and there are more commonly agreed truths.  String gauge affects playability by changing the hand and neck tension, thus affecting both the player and guitar.

Ultimately I advise you to pick your strings while only considering your preferences as a player and the specs of your guitar. If you are a , I strongly recommend you not use a heavy gauge at first as the pressure might be too much for you.

String Recommendations You Can Purchase Today

Replicating vintage string is hard for every builder as there are many factors to consider besides the gauge. I have listed out some of what I think are the most loyal replication to the original Jimi Hendrix Strings. 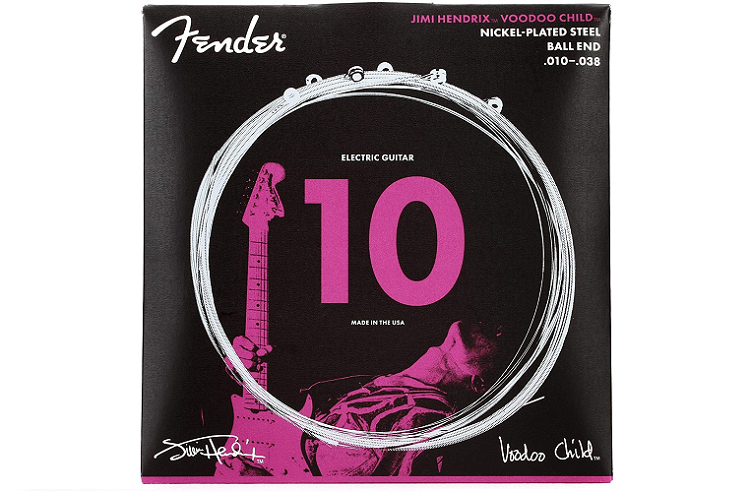 The most loyal reissue of the classic Jimi Hendrix strings is the Voodo Child Vintage from Fender. As the original brand behind Fender Rock ‘n’ Roll 150 that Jimmi used, it’s safe to assume that this set is similar to the original one.

The strings are easy to bend and offer a bright tone that will stand out on a single-coil style guitar. The heavy-high, light-low gauge setup is great for most genres, especially rock and blues. 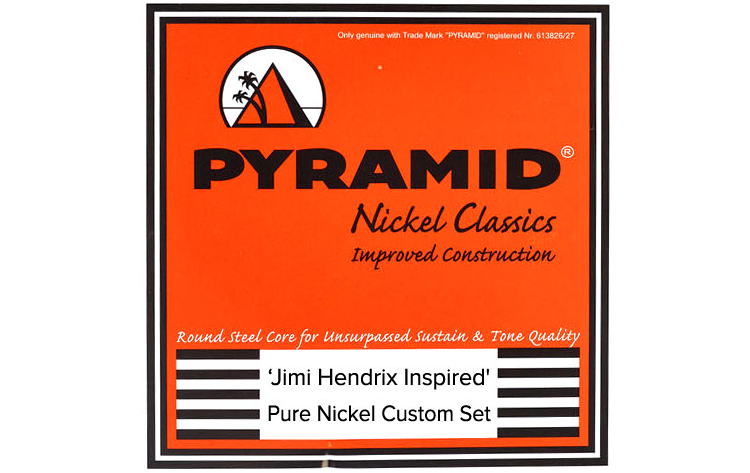 This particular set of strings is the rarest out of the three due to their round core and higher content of nickel. Their tone is warmer compared to standard .010 -.038 while having the same ease of play.

Question: What Strings Does Jimmy Page Use?

Question: Are Heavy Gauge Strings Bad for your Guitar?

Answer: If your guitar is not built for heavy string gauges, you could damage the guitar neck by putting too much pressure on it.  Heavy gauges are often recommended for big body guitars on acoustic guitars and not small ones.

Question: Why Did Hendrix Tune to E Flat?

Answer: The two main reasons why guitarists tune their guitar down to E flat are first to fit their vocal range and second to get a more vibrant open sound out of the guitar. Many blues and rock guitarists tune down to Eb, especially Stratocaster users that believe the guitar to sound better when tuned lower.

Being a great advocate of vintage gear and playing I always recommend guitarists experiment with the string gauge of their heroes. Trying out the string typical string Gauge Jimi used of 0.010 – 0.038 could help you approach your playing differently and put yourself in Jimi’s position while he is playing his leads on stage.

Remember to match the string gauge change with a proper setup and keep ultimately adapting the strings to your playing and not vice-versa.

Learn more about guitars by reading the guides below: