Nobody knew what guitar model to expect when John Mayer announced his departure from Fender and the new partnership with PRS. His music, style, and overall look were tied so much to the Strat that it was hard to imagine him playing another better-fitting instrument.

The PRS Silver Sky John Mayer signature guitar, born out of the partnership, is a surprising guitar that looks and sounds almost exactly like a Strat. Having played both the Strat and PRS John Mayer models extensively, I want to clarify the PRS Silver Sky vs. Strat debate in this article.

My bottom line up front: The Silvery Sky is an extraordinary guitar, inspired by a Strat, yet different in how it plays and feels. PRS has improved on some of the common Stratocaster issues, like the harsh sounding bridge pickup and improved tunning stability of the Tremolo system while offering superb playability.

The tone on the Silver Sky is more rounded and articulate. It still keeps the sparkling glassy high-end but is adapted to the modern player with higher gain pickups. The Stracoater keeps true to its vintage punchy tone, which has more attack and is easier to distort due to the lower output pickups.

Both electric guitars deliver exceptionally well if put in the same musical situation, yet each has its unique touch.

The Stratocaster is a very vast guitar model to make a comparison. To make it fair, I only used John Mayer’s former signature Stratocaster and compared that to the Silver Sky. The ‘Black1’ John Mayer Signature is inspired by Steve Ray Vaughan’s guitar and is almost identical to a Standard American Strat, perfect for this comparison.

From a specifications viewpoint, the main differences between the two guitars are the following.

Main Differences Between the Strat and PRS Silver Sky

The main differences between the Strat vs PRS Silver Sky are:

Both guitars had some pros and cons. Being premium instruments from well-respected brands, built quality and overall value are assured.

The main criteria were judging the guitars from the perspective of a rock and blues guitar player that is using a Stratocaster. If you’re not a Strat player, the cons of the Silver Sky might not resonate with you.

Main Similarities Between the Strat and PRS Silvers 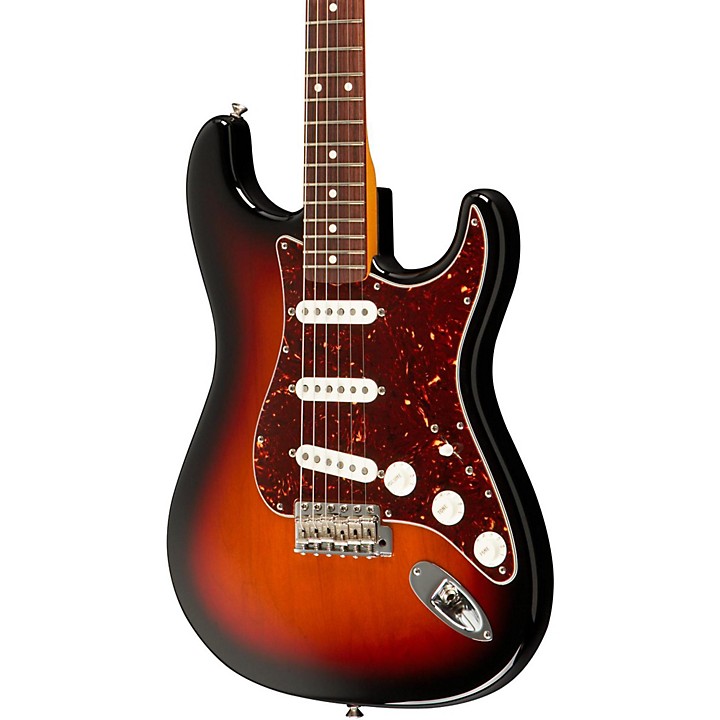 The Strat is the most replicated body shape ever; however, it becomes news when a major brand like PRS replicates it. As a Fender lover with an arsenal of different Strats over the years, I was as shocked and somehow judged Mayer’s choice at first.

The body of the PRS is a Stratocaster design with a similar 5-way switch, 3 single coils, 2 tone, and 1 volume control. The tonewoods and scale length are the same. Both have a tremolo bridge and don’t have a back Tremolo cover plate installed.

When held, the guitars feel almost the same and even the tone, which I’ll detail later, sits in the same range. If it was not for the different neck and headstock design, the Silver Sky could very well be a custom shop Stratocaster with some unique features.

Whichever of the two guitars you choose, rest assured you will have an extraordinary instrument for everything from blues to rock and everything in between. 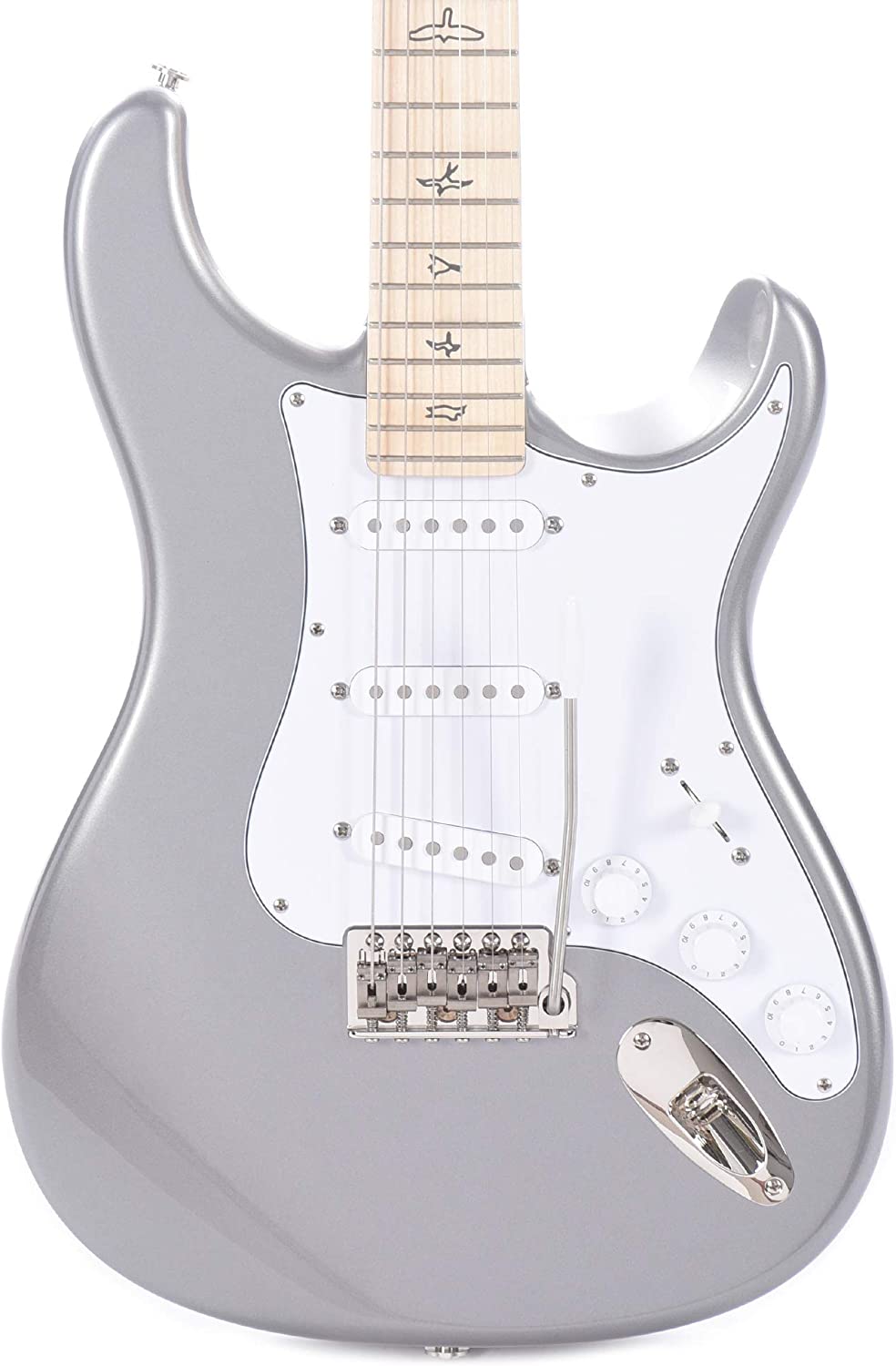 Why did John Mayer Switch to PRS?

If the guitars are so similar, and the Strat is exceptional, it comes naturally to ask why John Mayer bothered with going with the PRS.

From what he said when asked, the main reason was that Fender is not the company that they once were and would not take care of his specific request as much as PRS does. You can’t doubt the statement when you consider how far PRS went to please him with the design of the Silver Sky.

Another good reason is probably his music style.  John’s music style evolved much during the last years, and now he might feel more comfortable with a more well-rounded Silver Sky rather than the more ‘bluesy” Strat.

Getting to the most important topic, how does the tone of the Silver Sky compare to the Strat?

When I first tried the Silver Sky through a Fender Twin Reverb amp in a local shop, I did not know what to expect. It was almost like a Strat, yet felt sweeter, more wounded, and more ‘modern” and clean than the Stratocaster. After a week of playing it extensively, I gained a good perspective of the difference.

The main difference between the two guitars lies in the high frequencies. The pickups on the Silver Sky eliminate the harsh high end while keeping the glassy clean, warm woody sound and twang.

This makes the guitar feel cleaner, and since the pickups are higher output, the tone doesn’t “break” and distort as easily as on a Strat.

On the other hand, the Strat has more sparkle on the high end, sometimes too much, resulting in a harsh bridge pickup. However, this makes it a better fit for playing genres based on that more genuine twang. The neck pickup on the strat is far more woody and has the distinct Stratocaster attack that the PRS lacks.

The pickups on the strat, especially those on the John Mayer Signature, are lower output than those on the PRS. This means that they distort faster at a high gain, and you get the typical Stratocaster dynamic, where the harder you play, the more distorted the tone is.

This quality is especially noticeable for blues playing, where you can rely only on a few pedals and the dynamics of the Stratocaster.

Overall you can play the same music style with both guitars and have a great, slightly different result. Though the PRS proves to be more versatile for modern players, vintage tone lovers, especially blues players, might prefer the Strat. 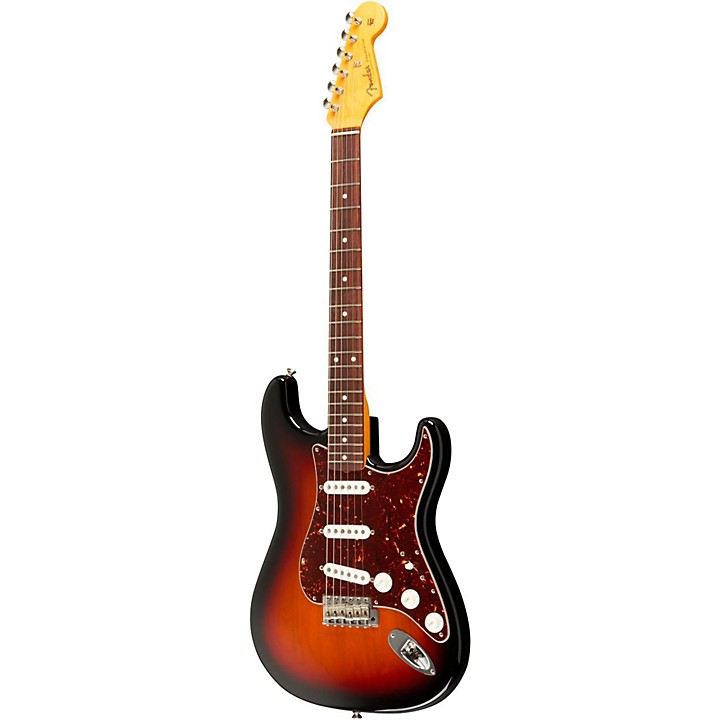 The second most important question is how does the Silver Sky play compared to the Strat?

Even though the neck on the PRS looks very different, it’s equally comfortable, if not more than that of the Strat. If you’re switching from the Stratocaster to the Silvers sky, you might need some days to get used to the new neck, yet the change is completely natural.

I would bring both the PRS and Stratocaster to any live show or recording session, and both will deliver exceptionally well. The price difference thought the PRS slightly more reliable in the long term.

Also, one big advantage is that guitars of this price range already come set up, and you can play right out of the box. If you want to adjust it, you can do it yourself with some simple steps or take it to a luthier for a quick, not expensive, setup.

Which is More Versatile, the Strat or PRS Silver Sky? 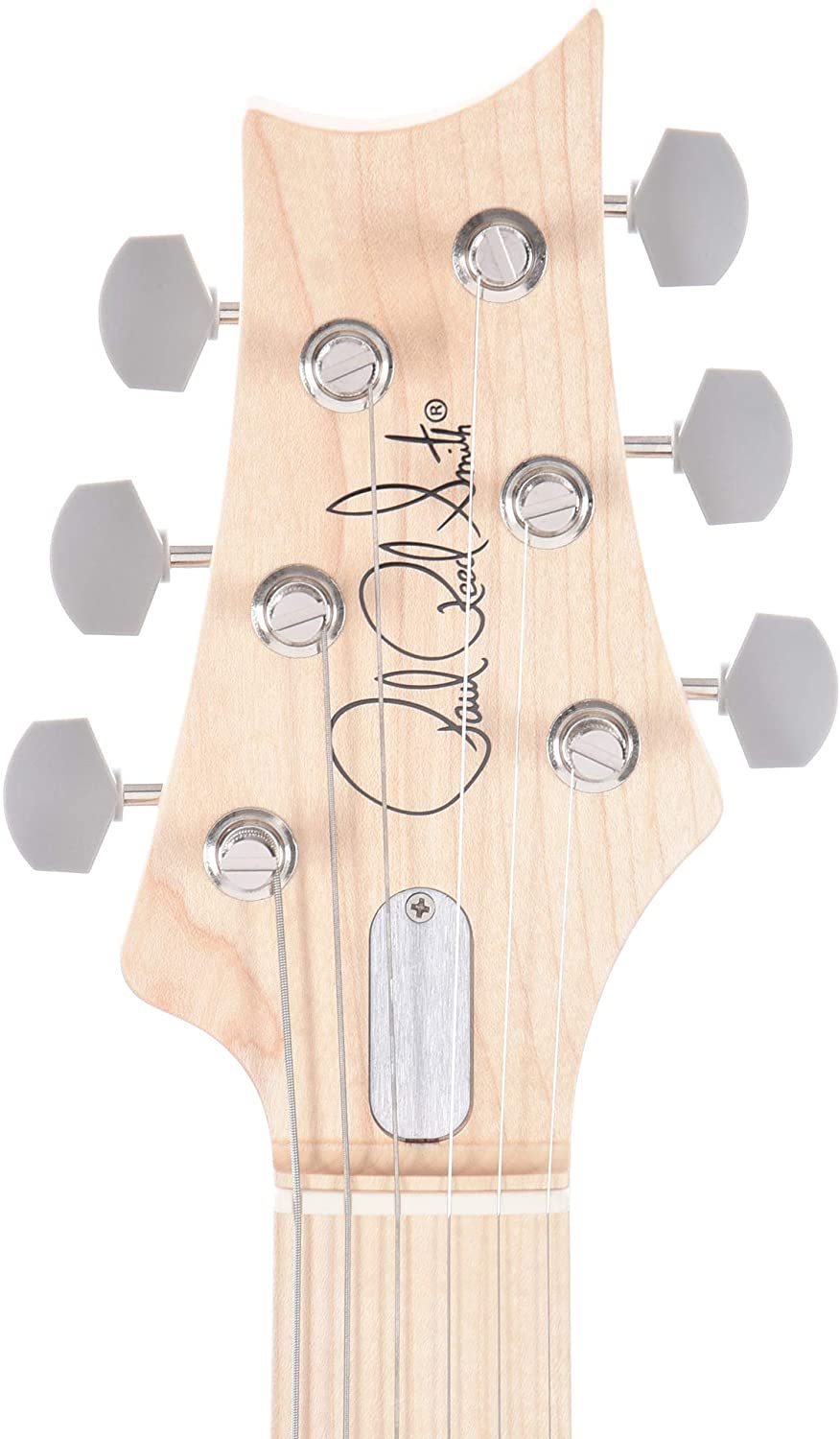 Beyond loving the Stratocaster, I also play it because it’s versatile enough to fit most music genres. I usually bring my Strat, a good amp, and a few pedals to most shows I perform. I bring out a guitar with humbuckers, usually a Les Paul, only when a heavy genre is involved.

I believe the PRS to be evenly versatile to the Start and do slightly better on high gain. The pickups on the PRS won’t do the job of a humbucker, but will not muddy up or become too bright when the gain is pushed.  Also, even if slightly, the PRS is prone to less Feedback than the Strat.

On the other hand, the Strats ‘flaws,’ meaning the harsh high end on the bridge pickup, could be an advantage for some players.

What are Some Good Budget Alternatives?

If you are into one, or both guitars, the US-made mainline series requires a serious investment. Both Fender and PRS luckily have their budget series that delivers on getting you what you look for with slight compromises. 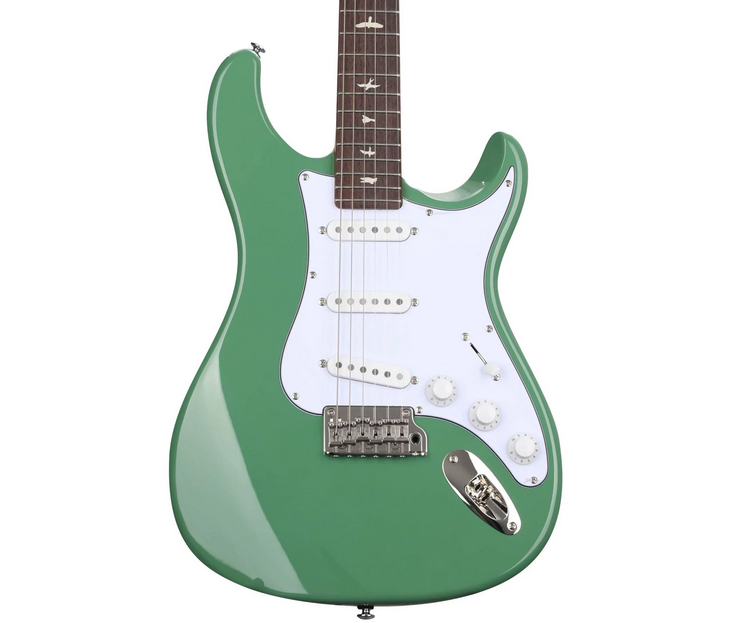 The PRS SE Silver Sky is the affordable version of the John Mayer Signature guitars. Retailing for much less than the original, it’s a perfect choice for most players who want that tone and playability but are willing to compromise on the parts used.

To keep the price lower than 1000$, PRS uses a Poplar body rather than Alde and replaces the 6 point vibrato with a two-post vibrato. The PRS 635JM ‘S’ single-coils share the same well-articulated characteristic of the original ones yet lack some slight overtones.

Without exaggerating, it’s still an amazing guitar, even at this price point. 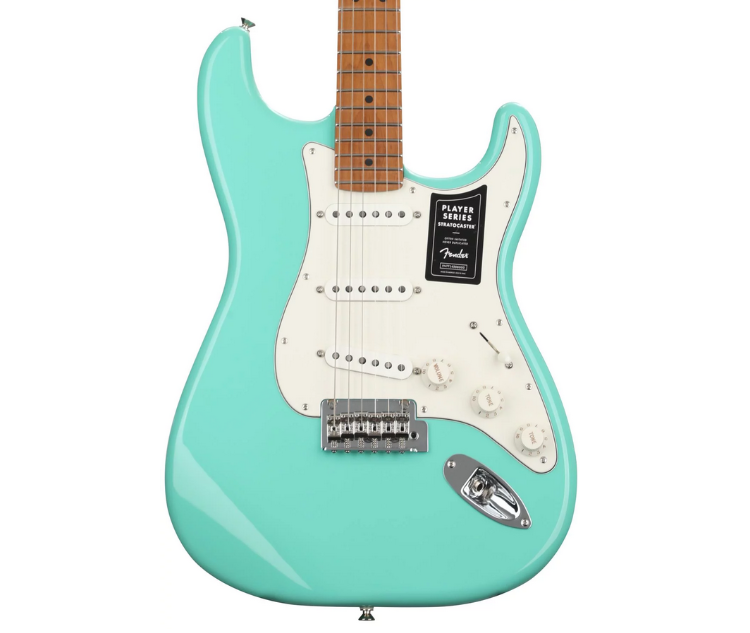 The Players Series is Fender’s budget alternative to the US-made Strat. All of the guitars are made in Mexico and use cheaper parts. The result, however, is impressive and close to the original.

This is the closest quality Stratocaster that you can buy at this price point. It has all that you expect and comes with the attack and woody tone we love about the Strat. The tonewoods used on this model are not premium, though and there is less sparkle on the high end.

Answer: He says he uses a stock Silver Sky. Yet it’s logical to assume he has his personalized setup, string height, pickup height, etc.

Question: How Much Does PRS Silver Sky Weigh?

Question: What Kind of Amp Does John Mayer Use?

Answer: Not only did Mayer switch his guitar from Fender to PRS, but he now also uses a  Paul Reed Smith J-Mod 100 amp built to his specifications.

The most polarising guitar of all time, the PRS Silver Sky is in a way an ‘improved’ version of the Stratocaster that fixes some of the iconic model’s flaws.

This thought does not make the SIlver Sky a better guitar. It is more reliable for holding tunning and handles high gains better while eliminating the harsh Strat bridge pickup high end.

However, fixing up those issues makes the guitar less prone to vintage guitar tone lovers that remove the extra twang and extra glassy easy-to-break tone that makes the Strat legendary.