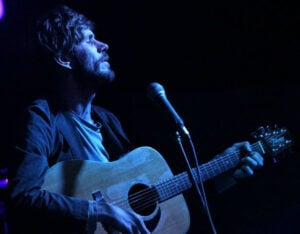 Kyle Baker
Traveling Rockstar at Guitar Space
Kyle is a guitarist and music teacher who has been a full-time musician for almost a decade. He is also a passionate writer and loves to teach and write about all things guitar-related. He began his musical journey working in a guitar store selling and repairing instruments, before moving on to studying the art of guitar making and repair with a luthier. During this time, he has played in bands ranging from blues to flamenco to reggae to rock all the while teaching guitar and constantly improving his craft.

The Gretsch White Falcon is one of the best-looking — arguably the best-looking — electric guitar models ever produced, certainly amongst hollow bodies. With its gold hardware, gorgeous white finish, and iconic “falcon” scratchplate, the “Cadillac of Guitars” has long left guitar players the world over pining for ownership.

It’s not all just good looks, though, the guitar also plays beautifully, with a silky feel and wonderful playability, and a sound that simply cannot be replicated by another guitar.

With a list of influential players using the guitar that includes the likes of Joe Strummer of The Clash, Brian Jones of The Rolling Stones, Brian Setzer of The Stray Cats, Neil Young, and John Frusciante of The Red Hot Chili Peppers, the guitar has become iconic and is firmly cemented into the history of popular music spanning several genres. 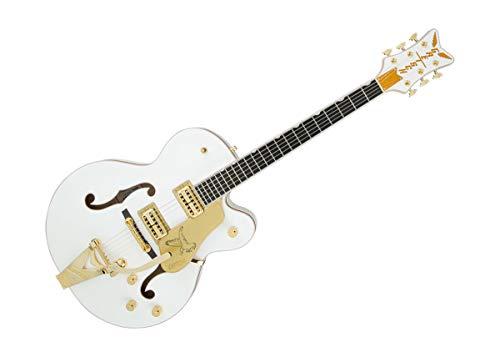 Gretsch Guitars Players Edition G6136T Falcon Check Price
We earn a commission if you click this link and make a purchase at no additional cost to you.

For many players, the White Falcon is a dream instrument, but does it live up to its historic hype? In this article, we’ll aim to find out. Read on below to find out more! 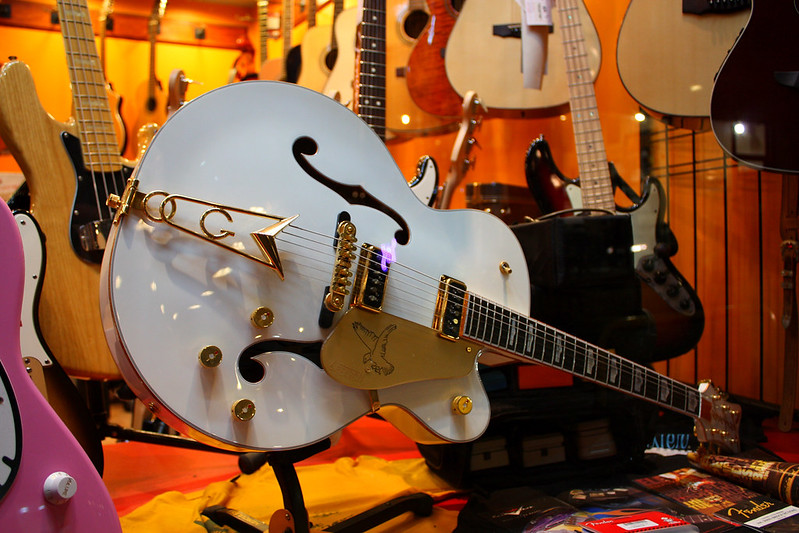 History of the Gretsch White Falcon

The Gretsch White Falcon is the guitar that wasn’t supposed to be — and the instrument almost didn’t make it to commercial production. The guitar was introduced in 1954 as a concept guitar designed by a jazz lead guitarist by the name of Jimmie Webster — one of Gretsch’s main design gurus during the ‘50s.

And it was designed as a “dream guitar of the future.” The future swiftly became the present, however, as the demand for the instrument was so high that the guitar went into full production only a few months later.

The guitar was designed primarily with jazz players in mind. But, the unique aesthetic, phenomenal unique tone, and incredible playability quickly put the guitar into the hands of jazz players, rockers, and country guitarists alike.

Ultimately, it made the guitar an instant crossover classic. Webster was a known car fanatic and known for taking his design inspiration from classic show cars, a fact that is plain to see with the White Falcon.

The guitar was so packed with detail — 24-carat gold finishes, sparkly binding, inlaid falcon feathers, and the iconic winged headstock — that Gretsch never intended to produce the guitar commercially as it was just too labor-intensive. But with the orders from dealers rolling in, Gretsch needed to find a way — and fast. 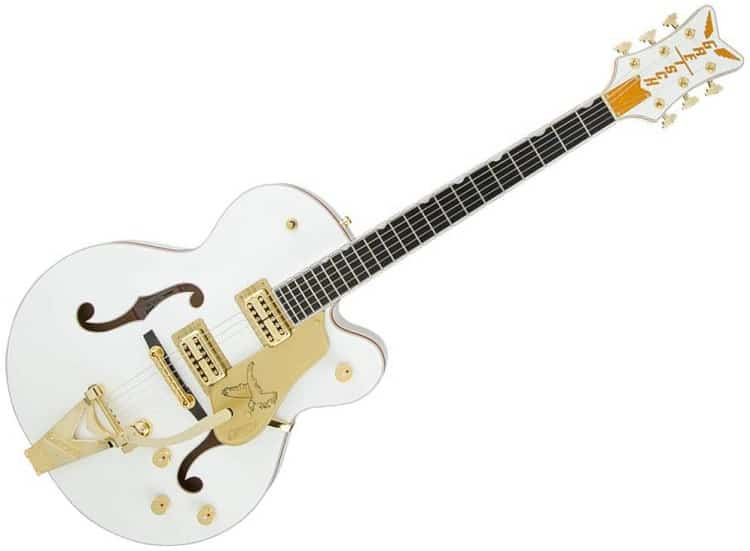 When the White Falcon was finally released to the public in 1955, it was one of the most expensive guitars money could buy, retailing at $600. Today, this is between $6000-$8000, a hefty price for a production instrument.

Gretsch kept making minor tweaks and additions to the guitar, including replacing the pickups for beefier, louder humbuckers, introduced a double-cutaway model, as well as the classic Bigsby tremolo, which during the 60s became a standard feature of the guitar.

By the end of the 60s, the Fender Stratocaster and Gibson Les Paul solid-body electric guitar options became the rage in popular music, and hollow body instruments like the White Falcon largely fell out of favor.

Gretsch was taken over by the piano company Baldwin, which suffered two factory fires among a host of other issues, eventually resulting in a shutdown of production in the 1980s.

Today, Gretsch offers almost a dozen Falcon models, but the Gretsch G6136T-LTV White Falcon is the modern update of the iconic 50s version with a few modern appointments added that make it, arguably, one of the best Falcons ever produced.

The White Falcon reissue has the same classic design aesthetic as its iconic predecessor, a truly beautiful instrument with some trimmings and furnishings that are a hat-tip to classic show cars from the era, with a slightly modern twist.

The body is as big and bold as it’s always been — 17-inches wide and almost 3-inches deep with laminated maple construction that makes it heavier than most other hollow-body guitars, offering a unique sustain and richness to the sound.

Cosmetically, the guitar is the same as the 50s and 60s era Falcons, with an ebony fretboard complete with the classic “thumbnail” fret markers. It also comes with:

The more modern touch of the updated Falcon comes from the new bridge — a pinned Adjusto-matic, and the TV Jones Classic humbucking pickups, a beefier upgrade that blends seamlessly between rock and country worlds. The circuitry has also been slightly updated.

The new Falcon has also been updated with 22 medium jumbo frets, a welcome addition that makes the guitar feel and play far better than its predecessor. 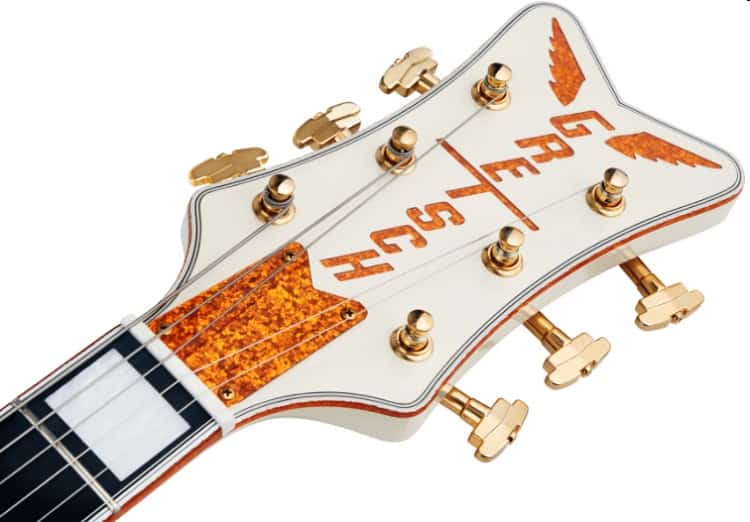 The White Falcon has a slightly longer scale length than other popular hollow bodies, giving it more of a condensed, tighter bass sound that is ideal for overdrive and rock applications. This also adds to the sustain already inherent in the guitar from the large, robust body and humbucking pickups.

The guitar has clean, tight middles and somewhat twangy highs, giving it a firm place in jazz and country settings too. The included TV pickups sound great, and combined with Gretsch’s use of wood selection, gives the guitar a truly unique sound that is almost impossible to replicate with other guitars.

The pickups have a fairly low output, which may seem counter-intuitive for rock or overdriven applications but give a sound that maintains clarity and definition at high volumes. Also, the pickups don’t make the guitar’s tone feel pushed too hard or forced and aids in feedback reduction.

The guitar is incredibly responsive to your playing — growling when you want it to but holding back when needed as well. Both the neck and bridge pickup positions are clear, crisp, and full of clarity and precision that is hard to beat with other hollow bodies.

Whether you are a rock player, jazz aficionado, or country lead guitarist, the Falcon delivers, able to maintain an unobtrusive rhythm tone. But, also unleashing grit and power when needed to, with a growling overdriven tone that is not in the least muddy. It does all of this while it maintains note clarity and accuracy all the way up the neck.

Despite the guitar being slightly heavier than other hollow body models, it feels great in your hands, and the 12′ Radius ebony fingerboard feels silky smooth and fast, and comfortable to play. The long scale length makes setting up the guitar a breeze, and we were able to achieve a superb low action without any fret buzz.

This scale length does have a small downside, though. If you’re a fan of bending strings up half a tone or so you’re going to have to fight the guitar a little, even with light strings.

The C-shaped neck profile may take some getting used to if you’re not accustomed to these vintage-style necks, but once you get the feel dialed in, you may find it difficult to switch back to modern neck profiles.

The White Falcon reissue is made in Japan, like many other Gretsch production models, and the overall construction quality and finish are superb. The nitrocellulose lacquer is slightly aged, and this finish will continue to age beautifully as the guitar gets played.

Most production model guitars nowadays are finished with polyester or polyurethane, strong, tough finishes that are certainly made to last but don’t age with the same grace and beauty as lacquer.

The lacquer finish also gives the guitar a great tonal quality that allows the top to vibrate and ring beautifully, not constrained by a thick poly finish. You can hear and feel this right away by simply playing the guitar unplugged – it already has a resonance and body to it before even being amplified, a testament to superb construction. 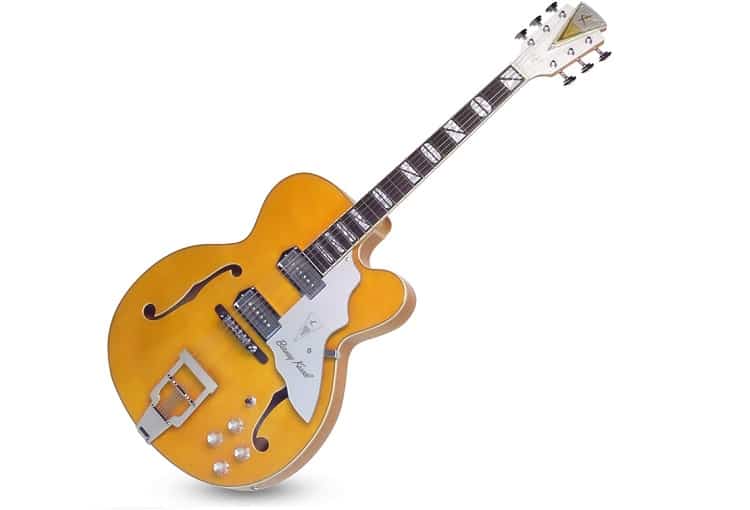 The White Falcon is a beautiful, one-of-a-kind guitar for sure, but it does come with a hefty price tag. There are some other Falcon models from Gretsch that are slightly lower in price, but still comparatively expensive. If you’re looking for something similar but don’t have the cash to fork out, there are some great alternatives to consider.

Do you have some questions that need answering? Here’s a breakdown of some FAQs:

Question: Where are Gretsch White Falcons made?

Answer: Like all production model Gretsch guitars, the White Falcon is made in Japan to a very strict and high-quality standard. The MIJ guitar puts some of the vintage instruments to shame, in our opinion and is made and finished with exceptional craftsmanship.

If you want a made-in-the-USA Gretsch, you can get one, but only one-off custom models are made here, and you are looking at a minimum of $3000-$4000.

Question: Are there Gretsch’s made in China?

Answer: Other than the Japanese models, there are some more inexpensive Gretsch models made in Indonesia, including the Streamliner and Electromatic series. These guitars are well crafted overall but have some cheaper appointments (as you’d expect) including inferior wood and pickups.

Answer: Yes and no. In 2002, Fender was granted an exclusive rights agreement to develop, produce, and market Gretsch guitars worldwide, but the Gretsch guitar is made in wholly separate manufacturing facilities.

Gretsch Guitars Players Edition G6136T Falcon Check Price
We earn a commission if you click this link and make a purchase at no additional cost to you.

The Gretsch White Falcon is classic and iconic guitar, not only due to its unique looks, but also its great playability, adaptability, and iconic sound.

The original design that was “never meant to be mass-produced” sparked a revolution of sorts, resulting in many copycats and inspiring a whole new line of guitar styles.

The reissue keeps the classic aesthetic of the original, with some welcome modern appointments that make the guitar even better overall, and arguably better than its predecessor.

The guitar may be too flashy for some, with its gold furnishings, solid white body, and large size. But the guitar certainly has changed the way that musicians outside of the jazz and country world view hollow body electrics, and has become an iconic piece of musical history.

The reissue keeps with this tradition, and while the guitar may not be the unique head-turner it once was, it is truly a unique instrument and a great choice for musicians looking for a unique voice.