Yamaha touts the FG370s as the best-selling acoustic guitar of all-time. Cool story, but I’m bugged by the lack of a source being cited for this fact. At the same time, this guitar has been around since the 1960s. It would not have done so if it wasn’t achieving some kind of a sales target.

It sounds like I’m being mean before I’ve said anything about this guitar. Call it a fear of the unknown: this guitar is a kind of a hybrid of regular dreadnought acoustic, and something a bit smaller. I’m curious about comfort and sounds.

Going through the specs of the FG370s doesn’t throw up any real surprises. It reads exactly like the spec list of any other acoustic guitar.

The one thing that threw me a little was the neck material: nato. That was a new one to me – I’ll elaborate on that later.

I think considering the face value of the guitar, one thing that stood out is the range of finishes available for it: your regular natural, and two sunburst options – tobacco brown and cherry. 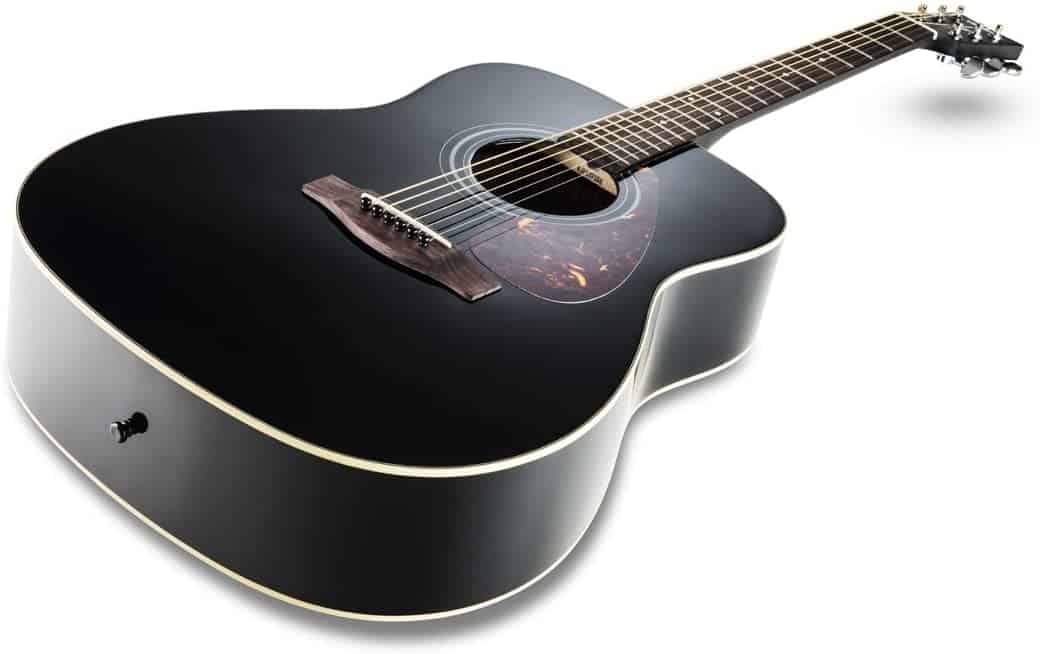 Based on the price and the absence of electronics, the FG730s looks to be aimed at casual home strummers, rather than professional gigging musicians.

I’d regard it as a good option for beginners with a reasonable budget, or perhaps intermediate or professional musicians who just need an instrument for knocking around. It seems like a likely candidate for the kind of guitar someone would have in the corner of their living room: fine for a casual strum, and there for entertaining during house parties or grabbing to bring to the park.

It has a generally relaxed presence in the context of guitar models.

With the parts involved in this guitar, there’s nothing fancy or groundbreaking. They’re essentially the unbranded parts you’ get on a lot of such guitars made in the east.

Earlier on when I was going through this guitar’s specs, I mentioned its neck was made of something called nato. Being honest, I had to do a little Googling for that – I had never heard of it either. I think it’s important that I’m honest about these things!

According to Wikipedia, nato comes from the Mora family of trees. It’s totally not related to mahogany, but it has a similar density and color, so it gets used a lot in guitar manufacture.

As it isn’t endangered and doesn’t look weird, it’s a good solution. Having a similar density to mahogany means it shouldn’t affect things too much in terms of tone. It’s all good in the ethical guitar-building hood.

The most eye-catching part is the tortoiseshell pickguard, and on closer inspection, other subtle design features like the abalone rosette and binding along the neck. These minor points feel like they’re trying to give the guitar just a bit of an edge.

As always, I go straight for the neck joint when I want to examine the construction of a guitar.

In the case of this instrument, the neck has been attached to the body using a dovetail joint. It’s a perfectly clean joint – a good example of quality craftsmanship. It holds hands with one of Yamaha’s prominent brags!

The FG730s has been put together with the standard X-bracing construction. It’s not exactly a unique construction method, but it’s a standard because it works if that makes sense.

Next, I peered down the length of the instrument, from the body towards the headstock. What I could see was just further testament to the aforementioned Yamaha craftsmanship. Not even the littlest whiff of warping, or anything short of quality work and finishing.

I mention the finishing there, because looking at it as closely as peering down the length of it, the guitar doesn’t look or feel “over-finished,” for want of an expression to describe it. Like, of course, it looks shiny, and has that new guitar smell, but the finishes don’t feel like overkill, which you do find on some guitars.

With the construction in mind, Yamaha certainly holds their own with the rest of the high-quality manufacturing coming from the east these days.

I’m more of an electric guitarist, and I always find it funny when thinking about how to describe the sounds of an acoustic guitar in comparison, especially the likes of this Yamaha, which doesn’t have any electronics.

It will sound like what it sounds like: no fiddling with amps and EQ settings, or various pickups selections.

In saying that, the sound coming straight from an acoustic might be more sensitive to the actual room that it’s being played in, and the acoustic properties of the room. I’m in a carpeted lounge-style room, relatively big, with plastered walls and some furniture. There’s going to be a little bit of natural reverb in this room. I’m also using my preferred 1mm pick.

Getting stuck in though, I started taking things pretty easy, a few gentle chords and relatively light strumming. The overall sound is well-rounded. No super-dull lows, or piercing highs. Letting the chords ring out, and the sustain is fine. If you’re a sustain nut as some guitarists are, you might be disappointed.

Even laying into the strings a little more, it still held its tone. Cool!

I felt that all the tones pointed towards my initial perception of the guitar: a good all-rounder for having around the house.

Between its price and tones, all signs point towards this being a generally fun guitar to have around to play, and the FG730s hits that spot.

And “fun” is the word that any description of the playing experience of the FG730s will keep coming back to. It’s going to take a lot of effort on my part to not continually repeat it!

My concern in approaching this review was that the body shape might be a bit weird, a bit much of something trying to keep everyone happy, to the extent that the end result would mean nobody was happy. But the bottom line is that if you have a comfortable body shape – like the FG370s – and a pleasant sound – again, like the FG370s – if you have much to complain about, it will sound like you’re making things up just for the sake of being negative. 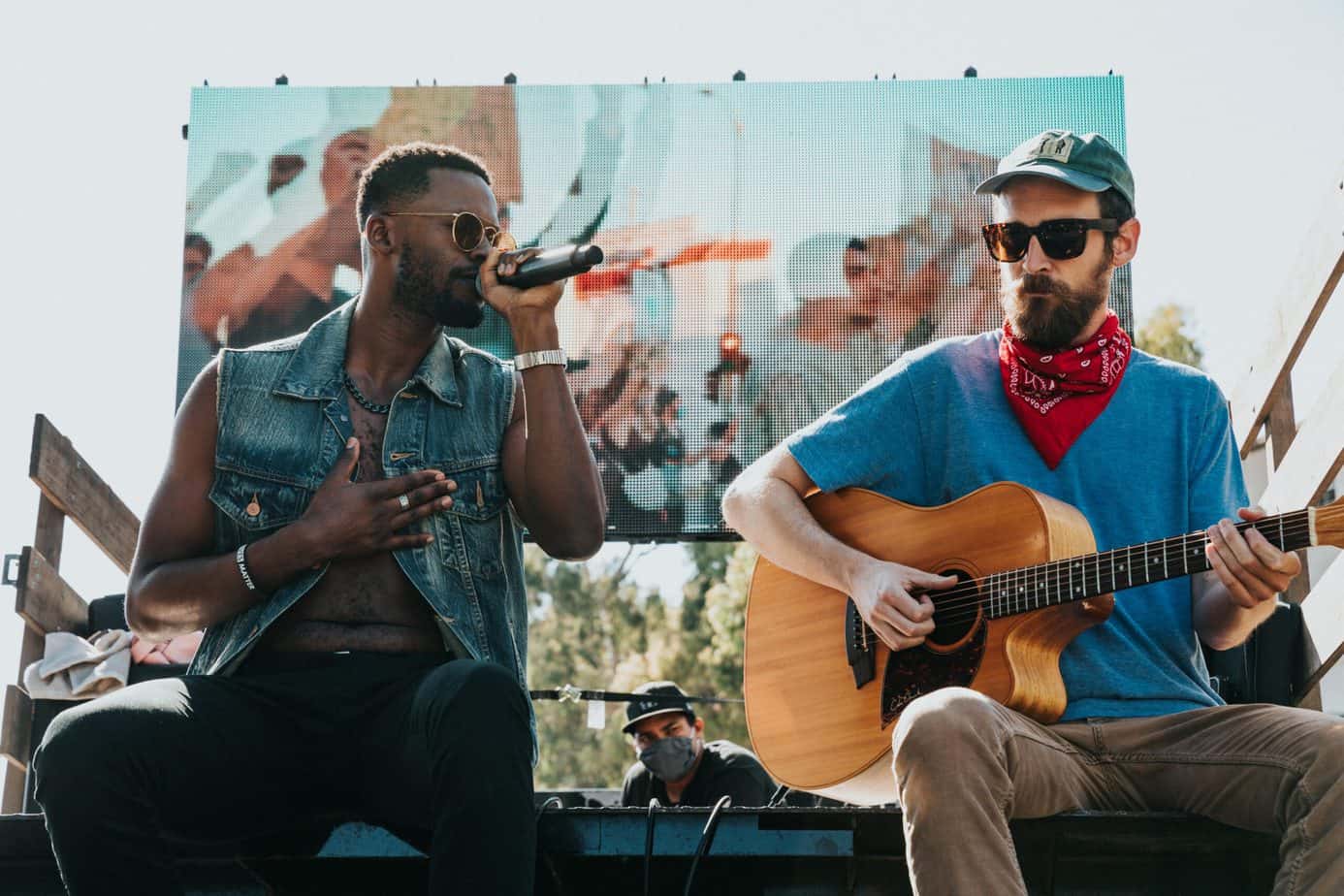 These points all come back to the playability of the FG730s, and that comes from how enjoyable it is to play. If a guitar is enjoyable to play, that means its owner will keep wanting to play it, and that’s its playability right there.

Personally, I have a preference for older guitars that have been broken in a little bit, so I find the fact that this one isn’t over-finished to be a massive plus.

As you can imagine, there are plenty of alternatives available at this price. Incidentally, most of them are electro-acoustics, but in the interest of keeping most comparable instruments, I’ve stuck to pure acoustics.

Allow me to introduce you to the Takamine GD-20. No more than Yamaha, Takamine is one of the big hitters in the world of acoustic guitars, particularly since the brand transcends budgets, and caters for every level of player.

Looking at it, it’s hard to miss the aesthetic similarities to the Yamaha, namely the rosette and the binding, but also that Takamine cut some cost by eliminating any kind of a pickguard. If you’re keen to get the worn-through look a lá Glen Hansard or Damien Rice, maybe that’ll help you!

The other thing worth noting is that the Takamine GD-20 comes with a cedar top. It’s alleged that combined with the mahogany sides, you’ll get a warmer tone.

It’s so far removed from what you associate the Ibanez brand with, but they actually have a sizeable and certainly respectable range of acoustic instruments. The AC240 from the Artwood rangeis a fine example.

It’s hard to miss the darker wood on the top. That’s mahogany, and it’s a very odd place to have some, but it’s a great guitar. It seems even less finished than the Yamaha, which I love. It’s also nice to see the Grover tuners – a subtle piece of outsourcing to upgrade the parts used beyond the unbranded generic ones normally used at this price.

I think I’ve covered everything you need to know if you’re looking at the Yamaha FG730s.

I’d recommend this if you’re looking for a decent instrument without breaking the bank. If your playing ambitions don’t really go beyond playing for your own pleasure or enjoyment, this is a great little guitar to have around the house.

It strikes a good balance between being a well-priced but good quality instrument, so if somebody was interested in learning some guitar, it’s not prohibitive, and it’s better than paying less for a worse instrument.

There’s nothing fancy in terms of its parts or construction, but that’s the whole point.