Zoom G5n Review: Reasons to Buy / NOT to Buy

Zoom is one of the most consistent names in multi-effects, catering for every guitarist, at every level throughout their playing journey to their personal sound for incredible guitar sounds.

From their little G1Xon for beginners, right up to this baby… they’ve got you covered.

This baby is the G5n, and it’s their top-of-the-range model, as reflected in the price. Zoom is a company who knows what they’re doing at this stage, they’ve been doing it for long enough – since 1983 to be exact.

So, let’s get started with dissecting the G5n essential guitar tones, and see what it can do for you and your journey. 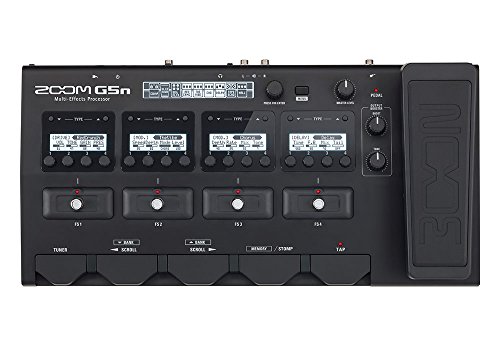 Core Features and Specs of the GSn

At this price, you’d expect something all-singing and all-dancing, and Zoom has pretty much brought that to the table for some great additional effects.

A solid, rugged design – probably not as bulletproof as other manufacturers, but you won’t have to play too nice with it. There are plenty of additional effects at your disposal here.

So far, so standard really. There’s nothing really shouting at me as being groundbreaking, but we review things to look at them more closely!

The music players who are most likely to part with this amount of money for kit like this, are ones who are sure they’ll be getting their money’s worth out of it.

This means we’ll be drawing a line to join this up with professional music players who don’t have the time, patience, or storage space for a full set of individual stompboxes.

I’d suggest this would be best for someone playing the corporate covers scene, who’ll need to cover a lot of ground in terms of the effects they’ll need, and need something that’ll survive the occasionally spilled chianti.

It’s a weird thing to consider – multi-effects are supposed to do it all! Let’s take a look at the parts first. Firstly, this is made of metal. Not tin or anything, heavier than that. If this breaks on you, you were doing it wrong, and you’ll need to seriously reevaluate your guitar pedal use.

Let’s have a nosey at the back panel. Nothing too surprising here. Jack plugs for an input and a stereo output; a mini-jack plug for attaching headphones; a mini jack plug input for attaching an MP3 player, phone or tablet, for jamming along to; your mains connection; your USB connection; and a control in.

“Control in”? What’s that? Well, in case you don’t have enough buttons or switches on the G5n, the control in is where you can plug in the Zoom FP01 footswitch, or the FP02 expression pedal. The FP02 kind of makes sense, if you feel you need both a wah pedal and a volume pedal.

I’m still trying to decide what the overall pedal looks like. At the time of writing, I’m opting for something from the Batcave. From the Christopher Nolan trilogy. It can be none more black, has lots of buttons, and appears to be built to withstand a building dropping on it. 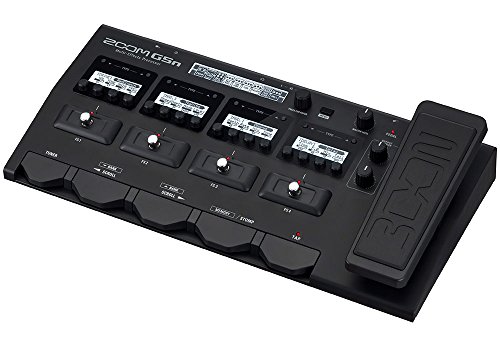 As noted, this Zoom G5N is built to be sturdy, to last… not necessarily to be abused, but it would probably be fine with that.

Chassis material aside, the G5n “guitar lab” comes with five little pedals on the front, a footswitch for each of its tone banks, six additional buttons for each of those banks, and a few other knobs on its top panel, just for good measure, and a full foot-size expression pedal.

Now, what should one make of this number of controls on a multi-effects pedal to create many incredible guitar sounds? Well, the first thing to comment on is that they all make the pedal’s design bigger overall, which may not be what people are looking for.

The second thing to consider is that it may actually improve the functionality of the pedal: less scrolling, less holding a button-down for a few seconds to make it change its function for the guitar effect… The sound quality isn´t too awful, does it? So essentially, what these two points come down to is whether you prefer less floorspace being taken up, or more functionality from your pedal.

Each of the tone banks comes with its own LCD screen, as well as another one towards the back of the unit, showing you what your effects chain looks like, making it next to impossible to not know what you’re doing.

Let’s get to the exciting bit – how this Batbox tank sounds.

They’ve combined some inspirations from classic effects pedals with some of their own work, but it’s likely that if you had time to analyze the audio properties, you’d be able to work out which individual stomp box was the inspiration behind it.

Let’s take a run through what they’ve included, in the various categories they’ve split the effects into.

Those are the main effects. I didn’t even get to the wahs, the amps, the cabs. There’s just too much!

I never feel like I have enough of a word count to talk about the playability of a good multi-effects pedal. They just do so much! You can have access to all the essential Guitar tones! I’ll try and cover at least some ground though. 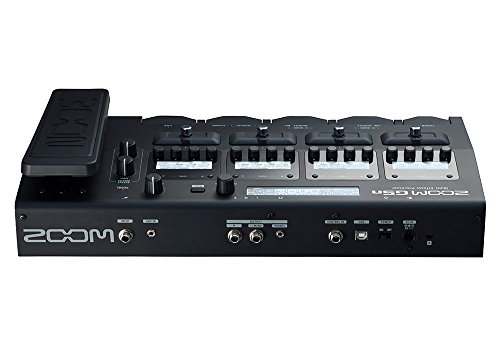 Connecting your G5n to your PC or Mac allows you to use it as an audio interface, so you can record your guitar directly into the digital audio workstation (DAW) of your choice. This is where the amp and cab models are most important.

Say for example you own a Fender Blues Junior amp, but you need the sound quality of a Marshall JCM 800 for a recording gig. You can set your G5n to the JCM setting while it’s plugged into your Blues Junior, but let’s be realistic – it’s still a Blues Junior. So you can put that JCM 800 sound directly to the recording source, and tada! It’ll sound closer to a JCM 800 that it would coming through your Fender first.

Some Alternatives to the Zoom G5n

There are still a few competitors for the G5n that create some iconic sounds. Let’s take a look at a couple of them.

Line 6 are one of the big names in multi-effects, and not without reason. They make great gear. 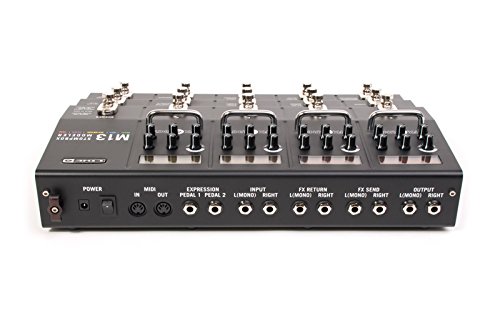 Their M series is a bit of a standout. With over 100 effects, it’s essentially the multi-effects pedal equivalent of the Avengers: they took all the effects from the type-specific multi-effects they previously released, such as the DL4 delay unit and the DM4 distortion unit, and brought them all together in a single box.

Each of these type-specific multi-effect were well-received in their own right, so there’s nothing wrong with bringing them in for a team-up.

This is very much for the gigging guitarists though, as it doesn’t feature any kind of USB output for hooking up to a computer. It doesn’t even come with an expression pedal, although it does have an input for one to be attached.

It does let you essentially set up different pedalboards for different types of music you might be playing. These are called scenes, and are pretty useful. 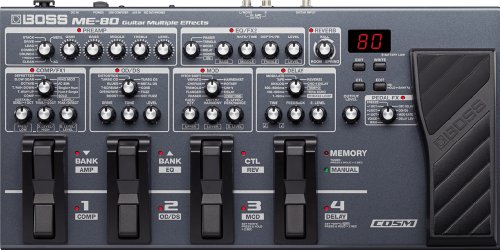 BOSS guitar lab are certainly a brand who need no introduction when it comes to effects pedals, and indeed multi-effects pedals.

Straight, off, just to clarify and confirm: yes, it is built like a tank; yes, it probably can be thrown off a cliff and be fine.

The ME-80 feels like their big daddy of multi-effects units, and has plenty going for it. This is so similar to the G5n, they could be sisters.

The first thing you’ll see is that it has many, many knobs. This is for a simple dial around method of selecting your effect type, with further knobs for tweaking the parameters.

It also has USB connectivity, so you can use it as an audio interface, or downloading free patches from BOSS’s Tone Central.

The Final Note on the Zoom G5n

It’s difficult not to be impressed with the iconic sounds of the Zoom G5n – it does tick so many boxes. It feels like there should be more boxes for it to tick them too.

I can see a working functions covers musician getting on well with it. With the range and quality of tones accessible, it is a solid workhorse of a pedal.

If you need one that does it all, this could be a goer. Be sure to check this listing for the latest pricing.

I’ve been playing guitar for a few decades and professionally for about 15 years. I’ve had lots of different effect pedals over the years i tend to always go back to the most simplest of setups a les Paul into a Mesa into a orange cabinet. One thing the boogie (rectifier) lacks is Reverb. Also since i’ve been playing a rectifier since they first came out i’ve found i’m now tired of the same old sound. Especially since it’s a commanly used amp. That brought me to looking into some of the amp simulators on the market. Not to mention also wanting something that can produce some nice reverbs. Anyways i spent awhile checking out numerous reviews online along with several sound samples so had narrowed it down to a line 6 500x and the Zoom g5n. Initially i was just going to get a used setup but all that was available locally were a few zoom G3x’s in which i heard good news about but also heard how much better the sound quality had been improved on with the G5N. So while going to pick up a G3x i stopped by a local music store and lucky enough they had one in stock so it came home with me this was on jan 28 2020 today feb 7 i haven’t been able to stop playing with the G5N. I’m truly blown away. It’s the most enjoyment i’ve ever spent money on for something that can sit beside me in the bed lol. The vast amount of amazing sounds that i’ve been able to produce are increadible. It really inspires the music writing creativity. In the past multie effects processors had a cheesy type sound and really killed any tone. Not the case with this G5N. I’m honestly preferring it now over the boogie. I do still run it into the orange cabinet so it helps to hold the tone. But as of yet i have nothing bad to say about it expect that now i have so many great sounds to choose from it’s making it hard to pick which ones to use. I’m pretty excited to try in for a live show and record with it as well.

Thanks for a great product Zoom!!

Great story Danny. The G5n is a great one. If you are looking for another alternative, try the Roland Boss GT10, that’s a fun one to use as well. It’s a fun thing to play on, especially live. It’s probably one of the best guitar pedals brought out in the past 20 years. Cheers!