Some of you may be shocked when you read the next statement, so make sure that you’re sitting down before you keep reading. There is a series of guitars in the market now that fold in half. Yes, you read that right.

I was absolutely skeptical about this guitar before I put my hands on it, but after playing around with one of the guitars from Voyage Air Guitar (I played with the Voyage Air Guitar VAMD-02), I’m a skeptic turned believer. Basically, the neck of the guitar folds right in half, making it easy to carry around and not too bulky to store if you want to put your instrument down for a while.

The Voyage-Air Transit Series VAMD-02  Guitar is a guitar that has something to offer to both professional musicians and hobby players. The folding neck on this guitar is absolutely one of the most innovative inventions that I’ve seen in the guitar community in the more recent years and it’s something that has the ability to benefit a good chunk of guitar musicians.

No matter your skill level or what you do with your guitar when you’re traveling around with it, both pros and hobby players will both enjoy how easy it is to carry around this instrument, especially because it isn’t as bulky as a non-folding guitar. This isn’t a cheaply made guitar and you can hear that in the sound of the instrument. It’s an innovative guitar with a stunning sound, and a great feel to it.

Let’s take a quick look at all of the features this guitar has to see what the Voyage Air Guitar VAMD-02 is really capable of! 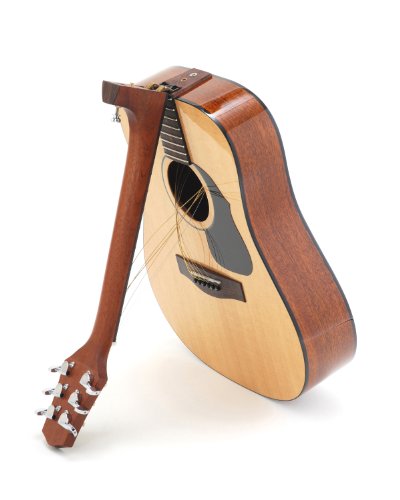 If you’re looking for a quick overview of the features of the Voyage Air Folding Acoustic Guitar, here’s what it all breaks down to be: 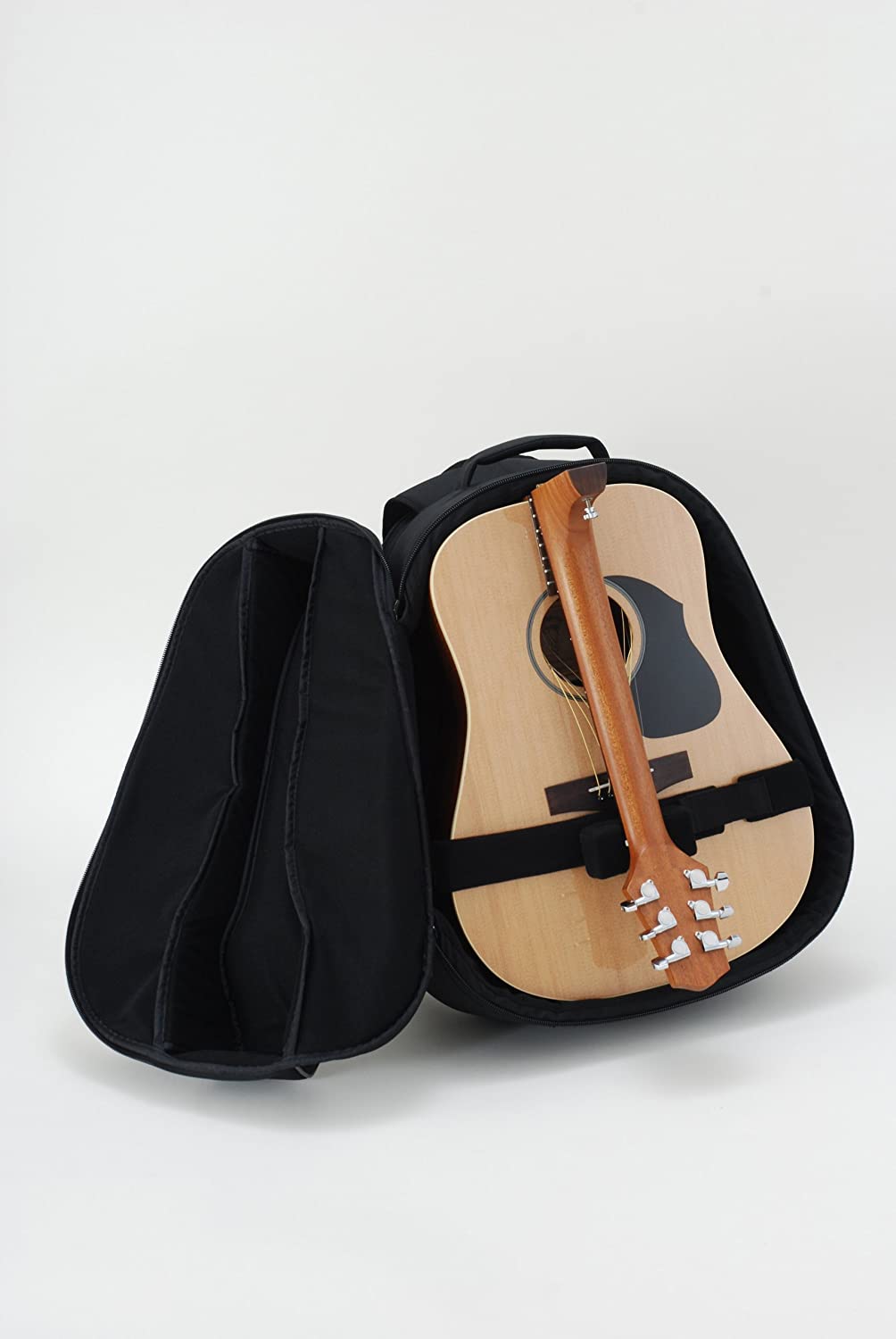 The first thing that I want to point out about this guitar is that even though this is a mini dreadnought, the VADM-02 has a full-size scale length! The reason that this guitar qualifies as a travel-size instrument is because the guitar folds at the 14th fret with a patented hinge system.

After setting up and taking down the hinge, I had a chance to see that the hinge is self-lubricating and is easy to fold and unfold. When the hinge was unfolded, it locked right into place and was incredibly stable, almost as if you weren’t specifically looking for the feel of a hinge on the neck of the guitar when you were playing, you wouldn’t notice that the hinge was there.

By all means, this isn’t a cheap guitar, which I was expecting it to feel like when I had it in my hands. You can tell that Voyage Air spent a lot of time working on the hinge mechanism on this guitar, but you can also tell that they still spent a good amount of time in other areas of this guitar. For $600, the quality of this guitar isn’t lacking and if you aren’t too picky about super fine details of your guitars, you will notice that the craftsmanship and materials used to build this instrument are of really good quality. 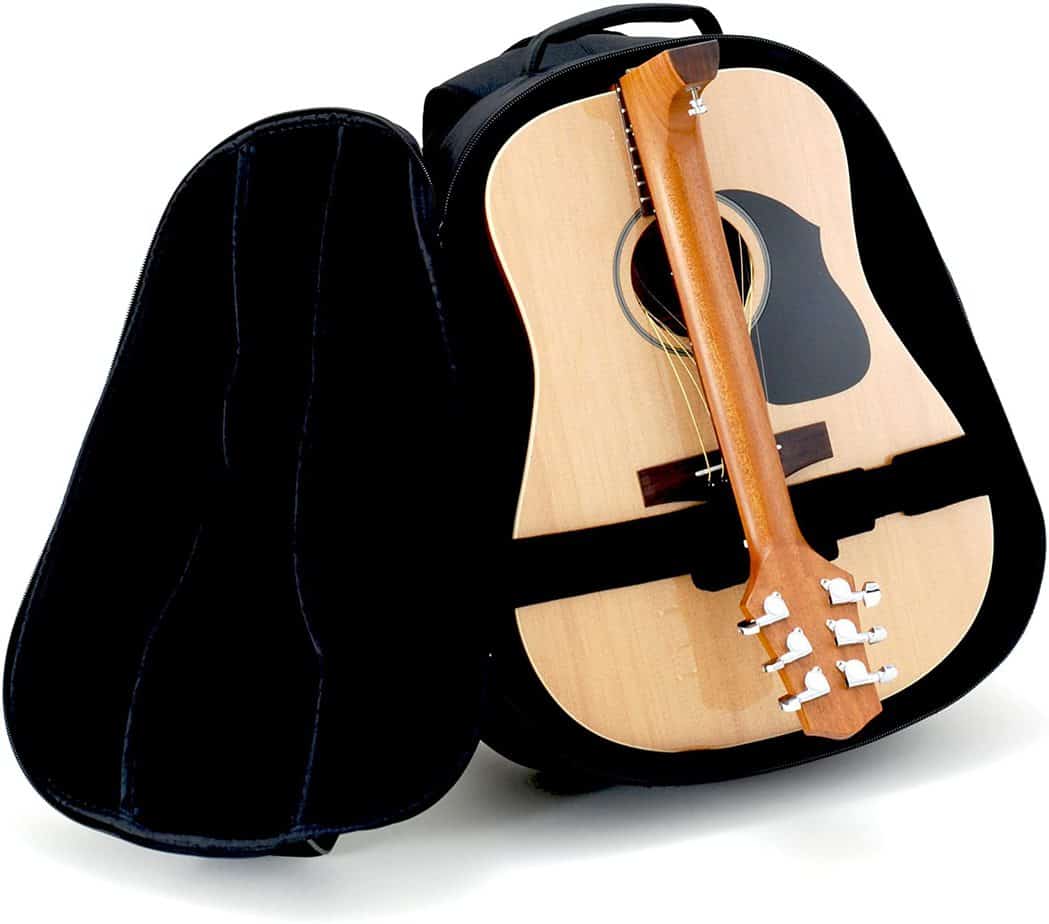 The dreadnought shape of the body sports a spruce top, mahogany sides and back, all which have been laminated and finished in a high gloss. While you may cringe at the thought of laminate being used in the construction of a guitar, the laminate is incredibly sturdy and isn’t affected by temperature and humidity changes as other tonewoods are.

In my opinion, the use of laminate just means that Voyage Air really made sure that this built to withstand the abuse that travel can bring to an instrument.

As for the rest of the guitar, the neck is comprised of solid mahogany, paired with a rosewood fretboard and 20 frets. The VAMD-02 is an acoustic guitar, although Voyage Air does offer other models that have pickups (if you’re interested in acoustic-electric version). The VAMD-02 is fitted with a set of chrome-plated die-cast tuners on the headstock and phosphor bronze strings.

With the purchase of this folding guitar, you will also receive a carrying case, which is absolutely essential since the shape of this guitar when it’s unfolded won’t work in a regular carrying case. The padded carrying case also comes with padded zipper pockets that are big enough for you to throw your laptop or tablet in!

The folding neck doesn’t impact the sustain or sound at all, which is something that I was pretty impressed with! Playing through with this guitar, I noticed that the sound of this guitar had a lot more character than a good portion of the other travel guitars that I had just played with.

For this being $600, the rich tone and sound projection definitely match up with the price tag. I immediately noticed how bold and full the projection was, as well as how well balanced the tone is.

Who is the Voyage Air Guitar VAMD-02 best suited for?

The Voyage VAMD-02 Air Guitar would best suit someone who is looking to have an acoustic guitar to travel around with, without having to worry about dealing with a heavy instrument, a delicate instrument, or dealing with a guitar that lacks projection, tone, and/or character. While this isn’t the cheapest travel guitar that you would ever be able to find, the VAMD-02 is certainly going to be able to withstand a decent amount of the wear and tear that comes with traveling.

With the VAMD-02, you’ll be able to easily travel around with your instrument because it’s so lightweight. You won’t have to worry about sacrificing tonal quality or worry about sounding like you’re playing with a cheap instrument, but you’ll have a better understanding of what the Voyage Air Guitar VAMD-02 has to offer you and your sound as soon as you get it in your hands.

Maybe you aren’t ready to get behind the folding guitar movement but are still interested in finding some sort of lightweight guitar that is easy to travel around with. Don’t worry, there are still options for you to choose from! Here are a few other alternative guitars for you to consider that are similar to the VAMD-02 guitar:

One of the most affordable guitars you will find from Martin is the Martin Steel String Backpacker Travel Guitar, which is a six-string travel sized guitar that has a very unique shape but produces a sound that is very similar to that of a banjo. Despite the small size, you still get a very large sound and wonderful projection

If you’re looking for a travel guitar that doesn’t look too different than a classic acoustic guitar, the Martin LXM Little Martin is one that you’ll want to take a look at. For under $400, you get a sturdily built guitar that will hold up well through all of your traveling, and you still get that classic Martin tone, without sacrificing your sound’s integrity. 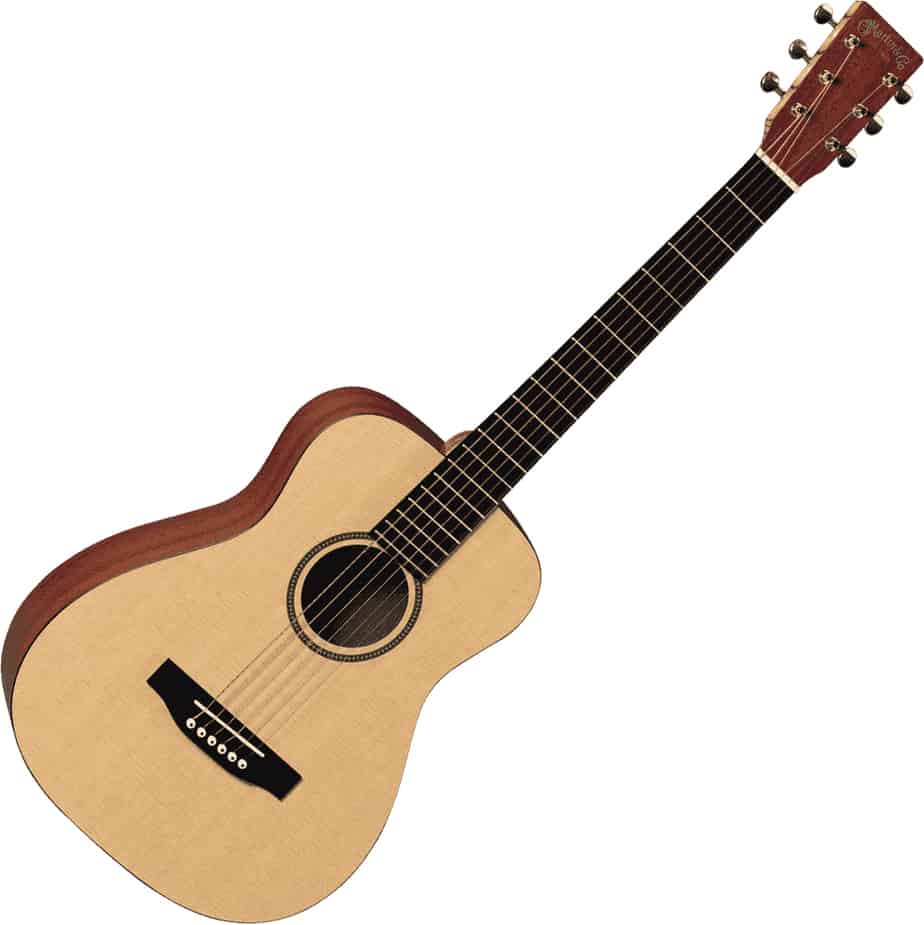 For some professional musicians who often place instruments under a lot of scrutiny, you will probably think that the hinge on this guitar is the only thing that puts this guitar in its own separate category apart from a cheaply made, laminated guitar. But I personally think that this is a decently impressive guitar for $600, especially because it’s such a convenience to travel around with.

Don’t get me wrong, this is an overall pretty great guitar, but it isn’t anything about the sound or playability blew me out of the water. For this being a travel guitar, having the hinge on this instrument makes it much more convenient to carry around in comparison to other travel guitars.

If you are someone who is looking for a guitar that is meant to travel around, the Voyage Air Guitar VAMD-02 isn’t going to disappoint in terms of tone or portability. It’s totally worth the money if you are someone who absolutely needs a power of a dreadnought right by your side, no matter where in the world you travel.