It’s incredible how much time I spent playing guitar without thinking of the instrument’s history. And the history of the acoustic guitar goes back further than I had initially thought. But, how do I cover almost 6000 years of history and the evolution of the world’s most popular instrument in under 1500 words? So, I’ve broken this brief overview into two parts.

Part 1: The Ancient History of the Acoustic Guitar 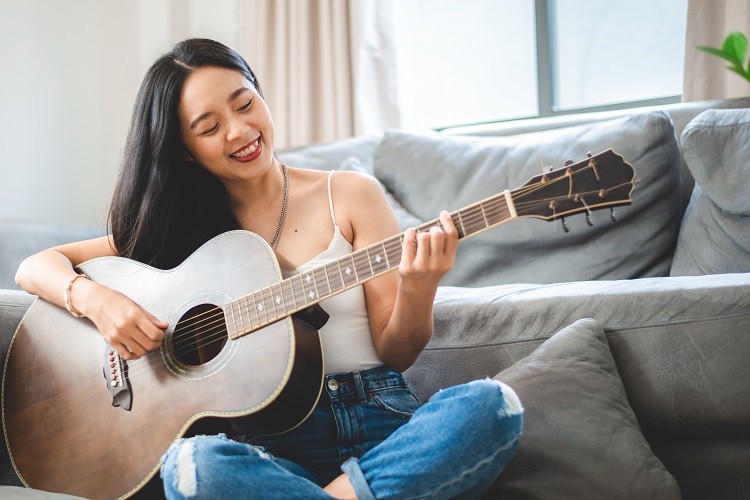 The earliest evidence of a guitar-like instrument dates back to the Uruk period (3500 BC—3200 BC). Where an engraving on a small round cylinder from the region of Mesopotamia in Iraq was discovered. This artifact portrays a woman playing the oud (a fretless lute with a short neck that was common in Arabic culture).

But, the oldest surviving guitar-like instrument is a tanbur from Egypt (c. 1500 BC). This instrument is a fretted lute with three strings, a long neck, and a pear-shaped body. 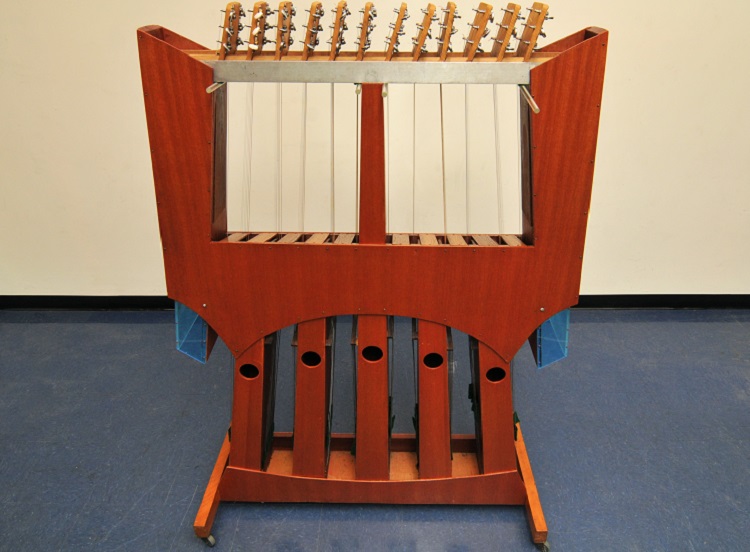 The kithara (c. 700 BC) was a prominent string instrument in ancient Greece. And it’s believed that the word “guitar” originated from the old Greek word “kithara.” This instrument shares much of its successor’s characteristics.

The kithara was made up of seven equal-length strings and a wooden body. Professional musicians typically played this instrument and became a part of Greek public performances. And c. 40 AD, the Romans introduced the kithara to Spain. 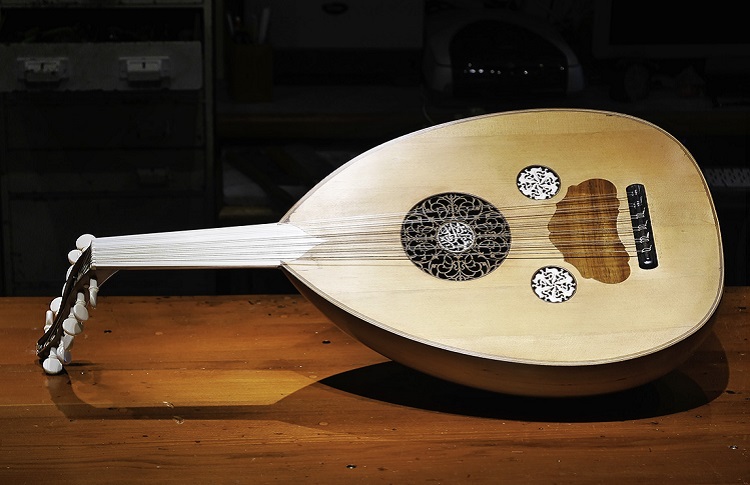 The Moors, nomads from North Africa, invaded Spain in 711 AD, and they brought their ouds with them. The Europeans added frets to the oud and called it a lute.

This is simply a combination of the Arabic word “Al’ud” (literally “the wood”) and the Spanish name “laúd.” And, just like that, the fretboard was born. The lute became very popular throughout the Middle Ages. And a few centuries later, the lute was the inspiration for the vihuela. 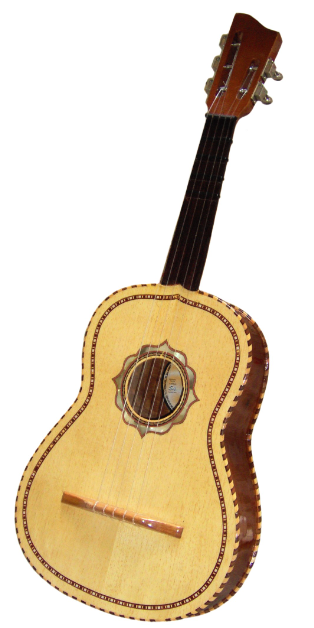 In 1488, the Heidelberger Totentanz was published. This German book contains 38 illustrations showing death’s figure holding a lute, vielle, and renaissance guitar. Two renaissance guitars were featured in the second set of drawings, which confirmed that the instrument existed in
1488.
Around this time, the vihuela (or vihuela de mano) was trending. This was a Spanish string instrument with frets that were plucked. It had five or six doubled strings tuned like the lute (G–C–F–A–D–G) and was the earliest string instrument directly related to the modern acoustic guitar.

There were three types of vihuelas:

1. Vihuela de mano: 5 or 6 courses played fingerstyle
2. Vihuela de peñola: Played with a pick
3. Vihuela de arco: Played with a bow (predessor to the viola da gamba)
The vihuela was popular in Spain, Portugal, and Italy till the mid to late 16th century. It then
evolved into the baroque guitar. 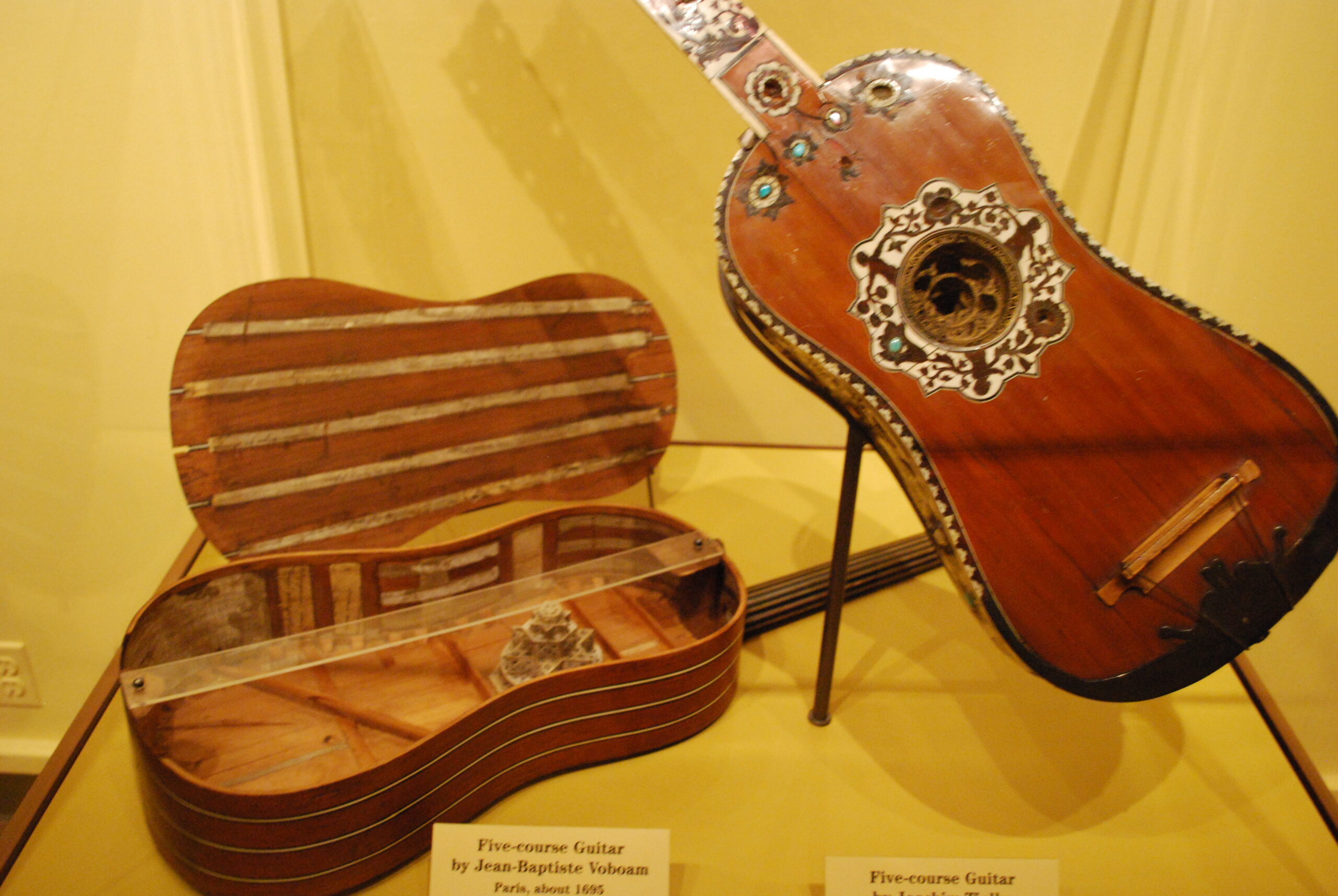 Part 2: The Modern History of the Acoustic Guitar

The Classical period was the guitar’s golden age. A new generation of guitar composers and performers became stars of the day.

In Spain, Dionisio Aguado y García and Fernando Sor were friends and they were the Clapton and Hendrix of their time. Aguado began using his fingernails when playing the guitar. And Sor was known for his unorthodox playing style, he rarely used the ring finger of his picking hand. Instead, he chose to use the thumb, index, and middle fingers of his right hand. 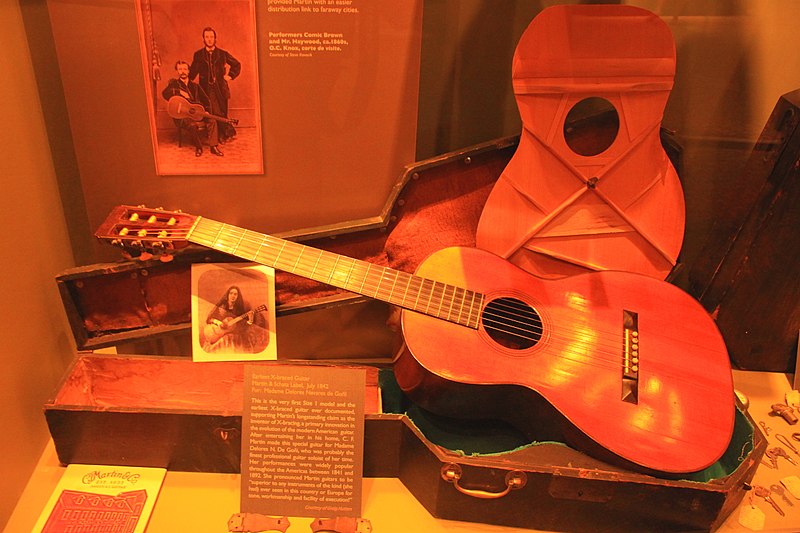 Around 1850, a Spanish guitar maker called Antonio Torres Jurado began to change the guitar’s structure. He was a guitar shop owner in Seville, where he built his own guitars. From there, he made several crucial alterations.

These innovations make Torres the most important inventor in the history of the acoustic guitar. But, Torres was not alone. He was rivaled by Christian Frederick Martin—yeah, that Martin—who founded the C. F. Martin & Company, which is still in business six generations later.

Between 1842 and 1843, Martin created what is believed to be the world’s first X-braced guitar. This acoustic bracing method would help withstand the tension created by steel strings, which eventually became a prominent feature of the acoustic guitar in the early 20th century.

The Early to Mid-20th century 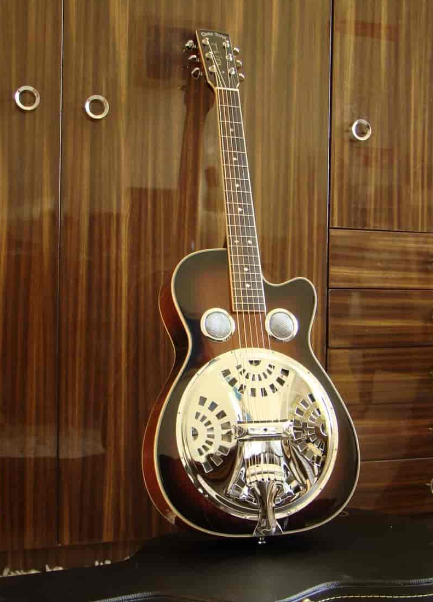 In 1902, American luthier Orville H. Gibson founded a company in Kalamazoo, Michigan. This company is known today as Gibson Brands Inc. and is one of the world’s most famous acoustic guitar makers. Gibson is credited with creating the archtop guitar, which redefined volume, tone, and vibration.

The archtop guitar had violin-like sound holes, an adjustable bridge and a curved body. These innovations enabled it to vibrate freely and produce a louder sound. By the early 1920’s, C.F. Martin & Company had begun focusing its production on steel-string guitars. These produced crisper and clearer sounds. The X-brace subsequently became the
industry standard for the steel-string acoustic guitar.

In 1927, John Dopyera invented the resonator guitar. This was designed to project enough volume to play alongside banjos and other instruments in the rhythm section. This was then adapted and recreated through The Selmer Guitar, a French instrument developed by Selmer-Maccaferri in the early 1930s. 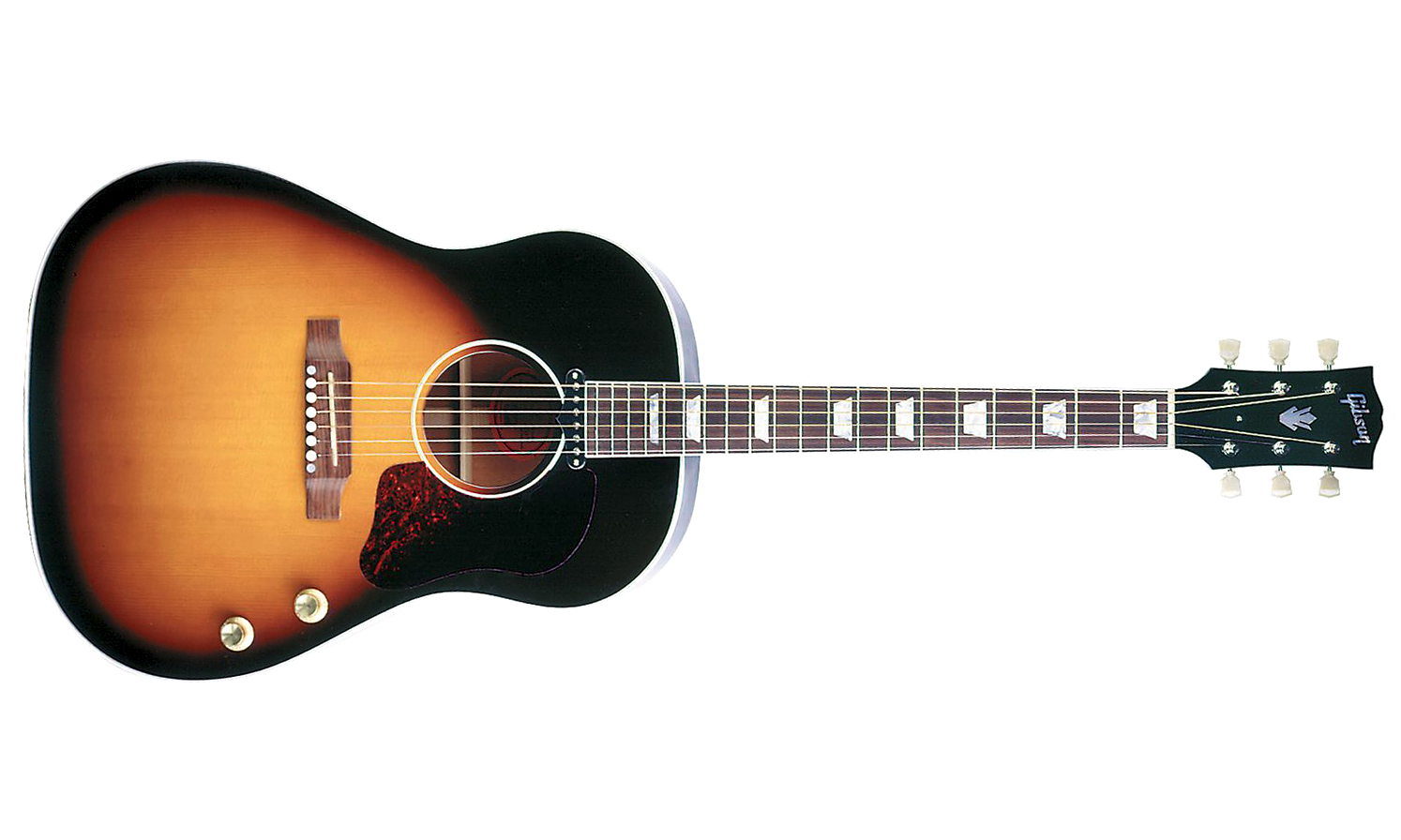 The Gibson J-160E became popular in the 1960s rock n’ roll scene. And the J-160E is believed to be one of the world’s first electro-acoustic guitars. It was made famous by the Beatles’ television appearances and appears on every album. Between the 1960s and 1980s, acoustic guitar amplification reached new heights thanks to advances in design and technology.

Up to this point, many artists simply pointed a microphone between the guitar’s neck and body for live performances. But, this often resulted in feedback problems and difficulties picking up sound. To counteract this, guitar manufacturer Ovation created a ’rounded’ back made from a fiberglass-type material in the 1960s. This greatly reduced feedback, allowing the acoustic guitar to be amplified.

Ovation was once again at the center of innovation in the 1970s, when it developed thinner soundboards to further increase the acoustic guitar’s volume and reduce feedback when it was mic’d up. The company also put a piezoelectric pickup in the guitar’s saddle to increase sound quality.

Over in Japan, Takamine made major strides during the 1980s. The company pioneered the use of an active acoustic pickup, which featured an onboard preamp and sliding EQ controls. It also created both passive and active acoustic guitar pickups which could be tailored to different instruments and applications. Today, innovations continue to disrupt the market, so keep your eyes and ears open for the latest advances in acoustic guitar technology.