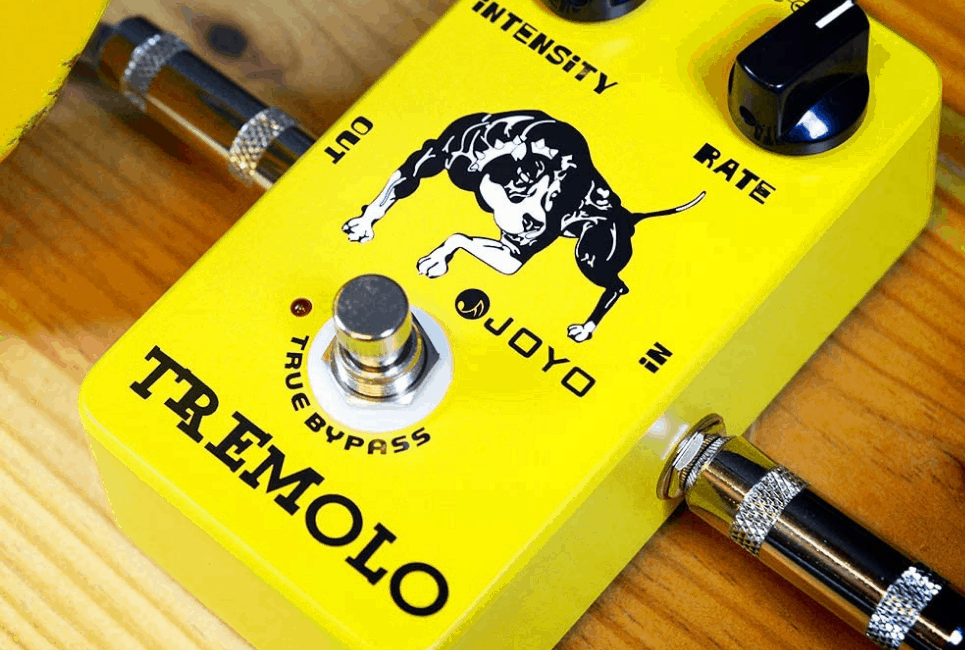 Back when playing guitar actually began to become a hobby, there were very limited options when it came to changing the tone of the instrument in any way, thus why tremolo pedals came so popular so fast.

It didn’t take a long period of time for tremolo pedals to become readily available to the market, which allowed musicians to experience the tremolo pedal hooked up to an amp that they chose.

You may find that a lot of people talk about the tremolo effect to be one of the most basic effects to build upon. But, how does a tremolo pedal work exactly? Knowing how a tremolo pedal works can allow you to choose a pedal that better works for your set up, which really will allow a musician to personalize their performances.

Debating tremolo Versus vibrato can be confusing, especially if you don’t know a whole lot about music. A lot of guitarists believe that a tremolo pedal is just an effect version of the tremolo bar that’s on the guitar.

strings, there is one thing that remains a constant- your volume. Tremolo pedals create their effect by affecting the volume of your guitar’s volume and not the pitch. In other words:

What are the different types of tremolo waves?

While the tremolo pedal itself is a very simple pedal, musicians face a whole array of options to choose from when it comes to the different waveforms that tremolo pedals produce. There are transistor based pedals and EA tremolo circuits that used to be extremely popular back in the 60s.

Tremolo pedals such as the Fulltone Supa-Trem use a photocell system that is commonly found with the silver face Fender amps. The Kingsley Bard pedal is a tube based tremolo pedal that offers an authentic bias vary tremolo.

However, with the recent surge of the digital pedals coming to markets a whole bunch of new types of pedals is becoming available to new musicians. Digitally processed signals provide users with almost endless tremolo options, such as Diamond tremolos, Empress tremolos, are all analog signal paths that are controlled via a digital center.

So, what does this mean to you? Basically, any tremolo option that you’re looking for with your guitar is most likely available to you.

This is probably the most famous form of tremolo and is typically found on large Fender amplifiers, such as Supers and Twins. The photo celeb derived waveform rises and falls in a simple and concise linear fashion. The slopes of the tremolo rise and fall equally; the peaks and lows of the tremolo poke clearly through the signal. 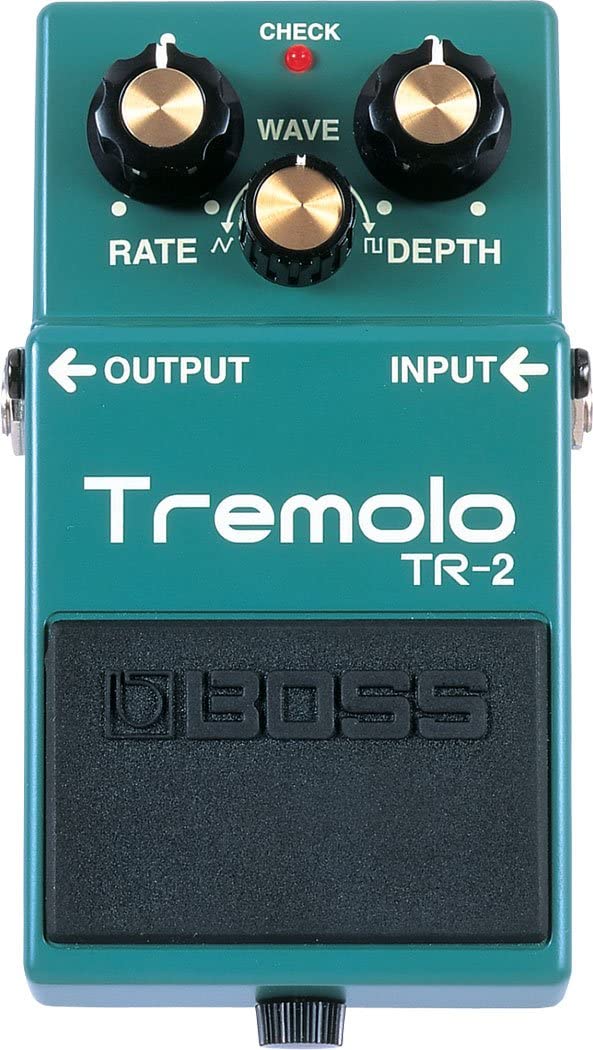 The Sine wave tremolo comes from a modulation of a power tube (or a transistor) almost like a form of overdrive. This is a simpler form of a tremolo, which is less precise than a triangle wave tremolo, as the sine wave increasingly adds and decreases power, which provides musicians with a sometimes asymmetrical tremolo.

By going to the most extreme form of a sine wave tremolo, some may describe this effect as a syrupy and can almost take on the sound of a square wave tremolo. You can find a sine wave tremolo in The Kingsley Bard, Mad Professor Mellow Yellow Tremolo, Basic Audio Throbby, and the Monster Effects Swamp Thang.

If you’re interesting in finding an overt effect, look no further than the square wave tremolo. When placed at extreme settings, the square tremolo can provide on and off patterns.

You can find square wave pedals in the Flicking Vicious Cricket, Earthquaker Devices Hummingbird, and the Catalinbread Valcoder; these tremolo pedals offer the square wave tremolo as a secondary option. 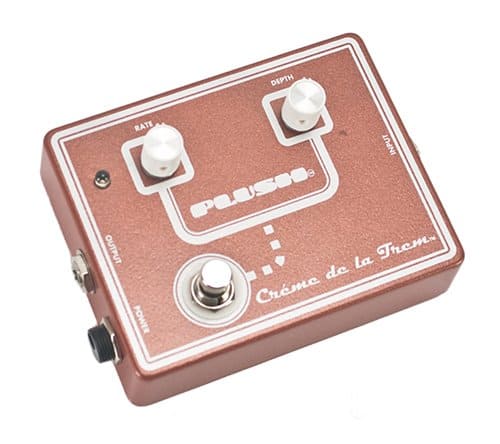 The idea for the phase shift tremolos was inspired by the large, brow Fender and Maganatone amplifiers. The phase shift pedal mimics the sine-like rise and fall effect, but also diffuses the signal, resulting in a complex modulation. You can find the phase shirt pedal in the Fuchs Crew de la Tremolo and the Effectrode Delta Trem.

The basic idea behind a volume boost tremolo is for the signal to be altered in a rhythmical way, which is accomplished by cutting out volume and adding volume back in. This means that the signal can be as loud as the unification when the wave of the tremolo is peaked.

There are countless solid entries on the traditional tremolo market, so manufacturers are always looking for new creations to push forward in the field. Manufacturers are beginning to add bias adjusters, tap tempo, filters, stereo panning, and expression pedals to open up new functions and new types of sound on to the tremolo pedal market.

Most tremolo pedals on the market today offer a sort of boost system that provides users with the ability increase the overall volume of the signal while the tremolo is in use. This means that the tremolo effect doesn’t need to be quiet in order to receive a perceived drop in volume.

By taking and boosting the overall signal produced from your instrument, the signal that’s affected can now match, or exceed, in unity.

How does a tremolo pedal work?

All pedals have the same basic operating system. A tremolo pedal makes a type of ‘whoa, whoa, whoa’ sound. The tremolo pedal has a circuit that changes the volume of your signal at a certain frequency; the highest level of the volume is controlled by whatever you choose to feed into the tremolo pedal.

However, the lowest level of volume is controlled by the Depth knob on the same tremolo pedal.

Once you have the effect pedal turned on, the circuitry of the pedal creates a wave carrier signal that quickly changes the range of your guitar’s raw signal. Simply explained, the volume of your guitar will start at a default value, be lowered to a certain point and brought back up again; this form of oscillation forms a wave.

However, if you’re looking to get into further detail on each pedal, the most common and simplest pedal is your Boss tremolo pedal. The voltage controlled amplifier adjusts the signal amplitude with a very specific waveform in order to create the tremolo sound (for this type of pedal).

These types of basic tremolo pedals have a reliable sound that’s very similar to listening to a vinyl record.

effect by adjusts the speed, creating a sine wave. Some tremolo pedals will use a low-frequency oscillator and combine them with low pass and high pass filters; this is how the Catalinbread Harmonic Mesmerizer tremolo pedal operates. 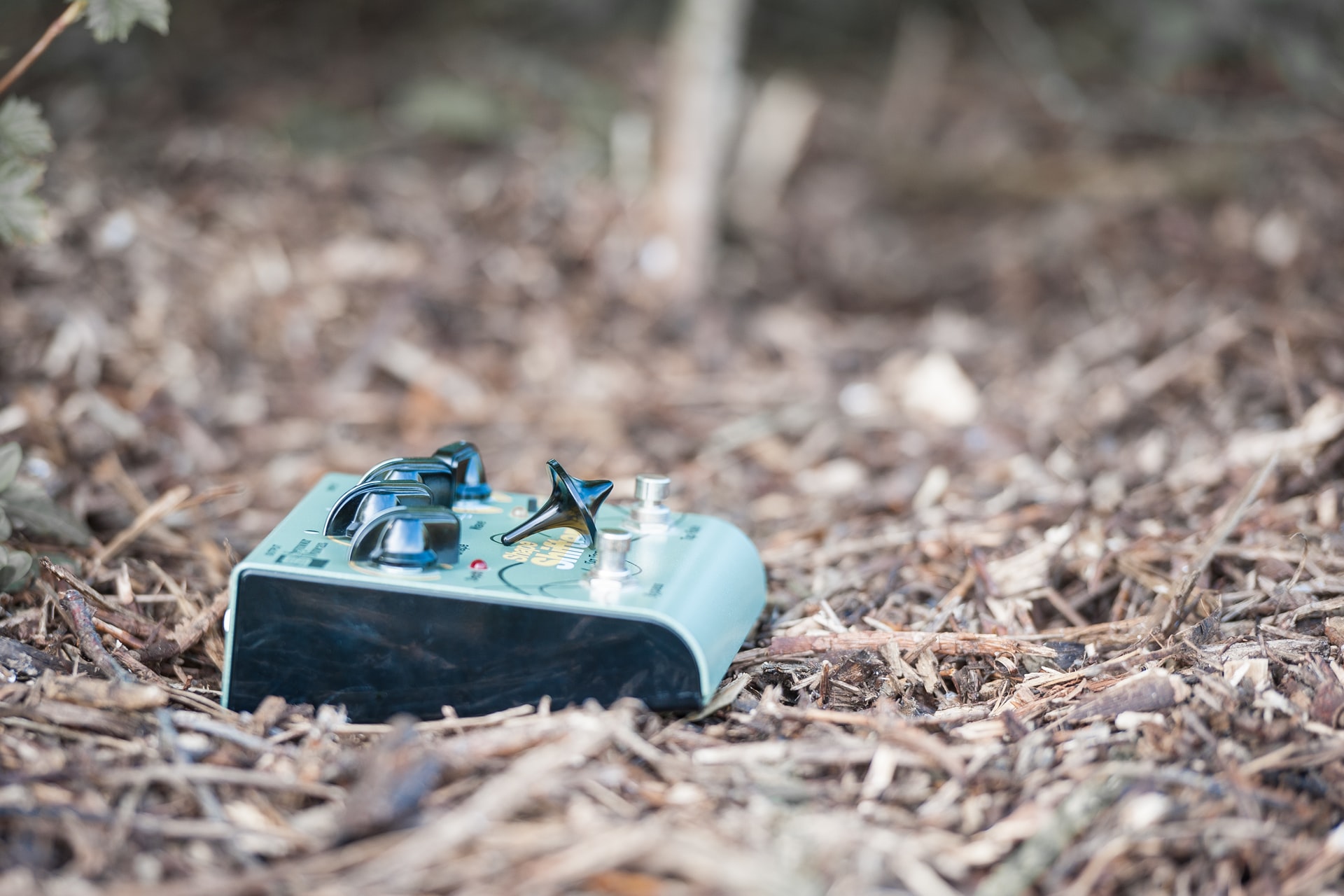 There are many different types of tremolo pedals available on the market that provide musicians with the most basic guitar effects. Being able to properly finesse a tremolo pedal does take some knowledge, skill, and practice.

With that said, this explains why some of the best boutique tremolo pedals can cost a pretty penny. The more complex that you’re looking for your pedal to be, the more money you should prepare to spend on your effect pedal.

Most musicians are fine with going with just a basic tremolo pedal, as the basic pedals give musicians a core performance, which is what made the pedal famous in the first place.

If you plan on writing or performing a lot of your music around this single effect pedal, you should think about going with a more versatile and unique tremolo pedal. Tremolo pedals are far from a static effect and allow musicians can produce limitless functionality and personalities with this effect. Have fun on your tremolo effect journey!

Hi Danny, thank you so much for writing this! I'm coming from the acoustic guitar background so I'm new to the effects pedal world, and your article helped me understand tremolo much, much better. I've actually been researching about tremolo pedals for a while and I'm starting to want the Supa Trem. My only problem is the only review I could find is this https://guitarunited.com/fulltone-supa-trem-review/ and while it was also helpful, it sounded biased towards the Supa Trem. I'd love to hear your opinion since you seem to know a lot about tremolo. Is the Supa Trem as good as the review said or is it all just hype? Thanks a lot!