Heavy metal wouldn’t be the same without Randy Rhoads. He was voted the best heavy metal guitarist and is still an inspiration to metal guitar players today. His unfortunate passing in 1982 shocked fans; he was definitely gone too soon. I believe if Rhoads was still alive, he would have set the bar even higher for metal guitar playing.

If you want to play like Randy Rhoads, you’ll want to know the guitars he played and the gear he used. Here’s a breakdown of his rig as well as his bio, death, and legacy.

This is a guitar that Randy played at about 14 years old. He got this guitar from his father, who was working at the Ovation Guitar Company at the time.

At the time, he was playing rhythm guitar in a small band called Violet Fox. Rhoads played this guitar until 1972 and even played it when he was with Quiet Riot.

It’s rumored that Randy traded the Ovation in for a Gibson SG. The SG originally had a red finish, though Randy painted it black. However, Randy didn’t enjoy it very much.

He ditched the SG for a Les Paul, which I will cover later. There’s little documentation of Randy playing an SG, so many of these claims aren’t backed by evidence.

The Harmony Rocket was Randy’s first guitar. It was technically his mother’s guitar and was mainly used by the students who attended her music school.

Randy also attended her school and learned the basics of guitar playing from the instructor Scott Shelly.

He picked up the Harmony Rocket when he was about 12 years old. However, Randy didn’t play it forever, since it was pretty old for his preference.

The guitar had a tremolo bridge and two pickups. It had a red burst finish.

Everything changed for Randy Rhoads in 1972 when he saw David Bowie live. Mick Ronson was playing a white Les Paul, so Randy had to get one for himself.

He then purchased a used Les Paul and it quickly became his favorite guitar. He used his Les Paul constantly, notably in the Blizzard of Ozz album and during live gigs with Quiet Riot.

Even though Randy Rhoads loved his Les Paul, this is the guitar I think of when I picture Randy Rhoads. Before Quiet Riot’s breakup, Randy ordered a custom-built guitar from luthier Karl Sandoval. In 1979, Rhoads received the iconic Flying V. It stands out because of its unique V-shape and for the black and white polka dot finish.

The guitar has DiMarzio Distortion Plus in the bridge position and DiMarzio PAF in the neck. The guitar is complete with black Fender hardware.

Unfortunately, the headstock broke after Randy dropped it. He only had the guitar for a short amount of time. Even though Sandoval repaired it, he had difficulty keeping it in tune. However, he played it for many live shows with Ozzy Osbourne, such as the video linked here.

I’m unsure of which guitar he used for the Blizzard of Ozz album. I’m reading on some sources that he used his custom Jackson for the album and only used the Flying V for shows, but I’m also reading that he did use the Flying V and the Les Paul for that album. It looks like he used different guitars for different songs, and not one guitar for a full album.

Randy Rhoads wanted a custom guitar. In 1980, he approached Charvel. The Original Sin came to life (though Randy called it Concorde). Concorde stands out in many ways. The guitar uses Seymour Duncan pickups and a Strat-like tremolo. After Grover Jackson took over Charvel Guitars, he rebranded this guitar as Jackson.

Even though Randy Rhoads liked his first Concorde, he didn’t think the body was distinctive enough.

He sought the help of Grover Jackson again, in addition to Mike Shannon and Tim Wilson, to recreate the Concorde. He elongated one of the V sides so it looked more aggressive.

They also added a fixed tailpiece to anchor the strings to the body (instead of a tremolo) and added a gold pickguard. TB-4 bridge and SH-2 neck Seymour Duncan pickups were also added as well as Grover’s locking tuners.

This was the last guitar that Randy Rhoads purchased. This guitar was made in 1957 and featured three Gibson original pickups. Unfortunately, Randy died only a couple of months later.

While we don’t know which model that Randy Rhoads used, he did play a Martin acoustic guitar on the song “Dee” from the Blizzard of Ozz album.

This was Randy’s first guitar ever. He got it from his grandfather. He was a doctor but played guitar for fun.

Even though there’s no evidence of Randy Rhoads actually playing this guitar, he was pictured with it in an issue of Guitar World Magazine.

Compared to other heavy metal guitar players, Randy Rhoads had a simple effects rig. He used an MXR 10 Band EQ and MXR Distortion Plus when he was playing with Quiet Riot.

When he joined Ozzy Osbourne, he changed his pedals to the MXR Flanger, MXR Stereo Chorus, and Korg Echo.

He also started using the Crybaby Wah. In some songs, he also used the AMS DMX 15-80S Digital Delay. 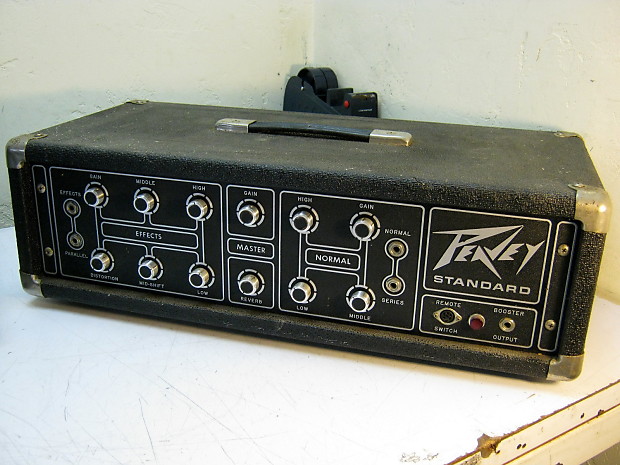 Randy Rhoads played this amp through a cabinet with six Altec speakers while he was in Quiet Riot.

While this is a rumor, Randy switched to a Marshall when he joined Ozzy’s band because Ozzy wouldn’t let him play with this amp.

He then lent his Marshall rig to Greg Leon, the guitarist who joined Quiet Riot after Randy left.

Randy Rhoads started using Marshall amps when he joined Ozzy Osbourne. When they performed, he would use up to three of these amps.

He would play them through 1960A and 1960B cabinets that were painted white.

He largely played using pentatonic scales with techniques such as hammer-on and pull-offs to enhance the diversity of his playing while playing solos cleanly.

He would play fast with alternate picking, he also chose a legato approach. This made his guitar playing smooth but still fast. However, Randy was also one of the first guitarists in metal to add influences from other genres.

He added a lot of classic blues licks as well as various other scales, such as diatonic scales in various modes. In his solos, he used a lot of chromaticism, bends, and arpeggios.

Randy also stood out because he didn’t follow the trends seen by many other incredible 80s guitar players.

For example, while Eddie Van Halen started the tapping trend, Randy typically avoided tapping. However, when he would do tapping, he was very clever about it.

There’s a major reason why Randy Rhoads is such an influential player: he gave guitar a voice.

While guitarists in other genres, such as rock, blues, and jazz, had already mastered the “guitar voice,” few players in metal achieved this before Randy. What do I mean when I say “guitar voice?” How I look at it is the guitar is singing to you.

It’s a unique style that not every guitar player develops. When you do find your guitar voice, any listener will recognize your playing.

I also think Randy Rhoads was innovative because he didn’t copy what other guitar players were doing. He was heavily influenced by classical and blues music, resulting in a unique guitar style that inspired new developments in metal music.

Overall, Randy Rhoads was a virtuoso who introduced melody and intricate techniques to metal guitar. Randy pushed the envelope to the capabilities of metal guitar playing, introducing new playing approaches to the genre.

He used his skill in Quiet Riot and Ozzy Osbourne, making his music famous for generations. These are all reasons why Randy Rhoads made guitar history. 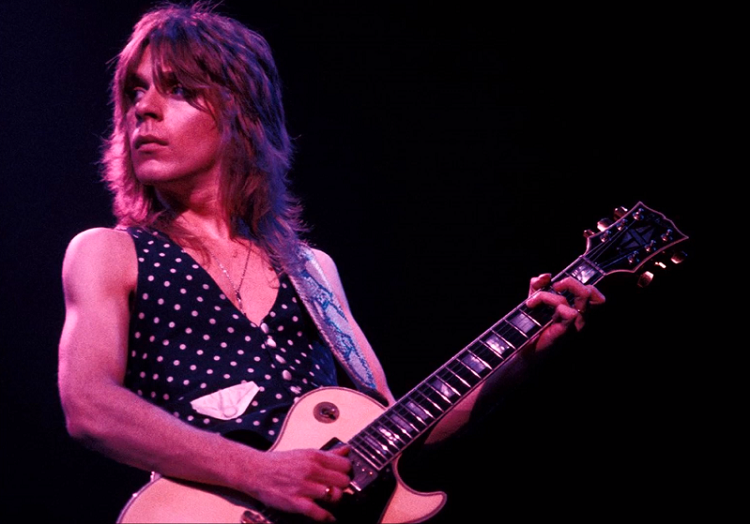 Randall “Randy” Williams Rhoads was born on December 6, 1956 in Santa Monica, California. He was the youngest of three children.

His mother, Delores, operated the Musonia Music School. It was here that he learned the basics of guitar playing at age 6. He played acoustic guitar until age 12, where he switched to electric.

Randy formed his first band, Violet Fox, with his brother, Kelle, when Randy was only 14. From there, he formed other bands with his friend Kelly Garni. Those two eventually formed Quiet Riot.

Quiet Riot quickly became one of the most popular metal bands in the Los Angeles scene and were signed to CBS/Sony Records in 1976.

In September 1979, Randy auditioned to join Ozzy Osbourne’s new band. The rumor is, as Randy was warming up, Ozzy witnessed him playing and immediately told him he got the gig.

Randy Rhoads recorded two albums with Ozzy — Blizzard of Ozz and Diary of a Madman.

Randy Rhoads tragically died in an airplane accident on March 19, 1982. The band was going to the Rock Super Bowl XIV festival in Orlando, but the plane stopped and Randy switched to a different plane, along with ex-commercial pilot Andrew Aycock (who was also their tour bus driver) and the band’s wardrobe assistant, Rachel Youngblood.

The pilot attempted to fly the plane close to the tour bus but ended up clipping one of the plane’s wings on top of the bus. The wing broke in half and the plane went spiraling out of control. All three passengers were killed.

Randy Rhoads’ last show was at the Knoxville Civic Coliseum on March 18, 1982. Ozzy Osbourne said that Randy never did drugs and hardly drank. A conversation Ozzy had with Randy was Randy confronting him about his drinking and telling Ozzy, “you’ll kill yourself.” 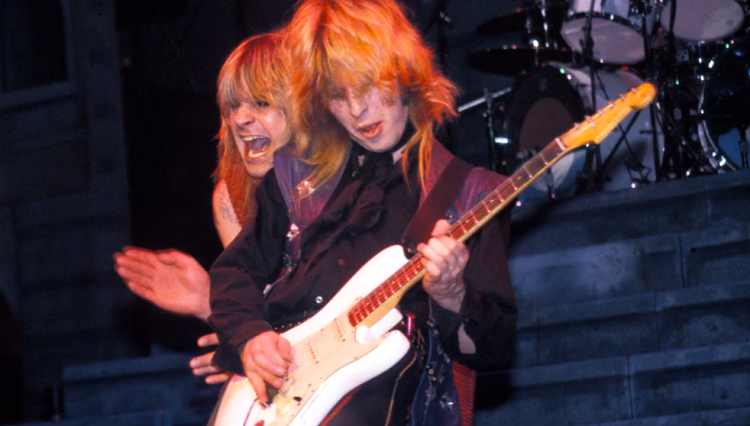 To this day, Randy Rhoads is seen as one of the greatest guitar players in metal. His work has been renowned by publications such as Guitar World Magazine, Rolling Stone Magazine, and more.

Some of the most prestigious guitar players in metal, such as John Petrucci (Dream Theater), Dimebag Darrell (Pantera), Mick Thomson (Slipknot), Alexi Laiho (Children of Bodom), Buckethead, Paul Gilbert (Mr. Big and Racer X), and Michael Angelo Batio, have regarded him as one of their influences.

Fans today can easily access Rhoads’ material. In addition to his work with Ozzy Osbourne and Quiet Riot, there’s hours’ worth of live footage on YouTube. You can buy Rhoads’ Flying V at nearly any music store.

Question: How Many Guitars did Randy Rhoads Own?

Question: Who Played Guitar for Ozzy Osbourne after Randy’s Death?

Answer: Bernie Torme was Randy’s first replacement. Since then, Ozzy has gone through multiple lead guitarists. They include:

Not all of these members had a significant contribution. For example, Steve Vai only has one songwriting credit and Alex Skolnick filled in for one live show.

Randy Rhoads is a heavy metal legend. He was a guitar prodigy; born in a family of musicians and training on guitar at 6 years old.

He came from a robust classical and blues background, adding these elements to metal guitar playing.

Some of his most notable guitars include the Karl Sandoval Playing V and both Jackson Concordes. 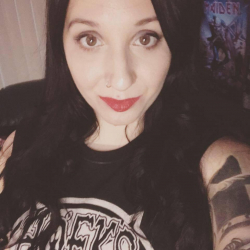