The Ultimate Ibanez RG8 Electric Guitar Review Everyone Will Love

Eight-string guitars have been become more popular in the past recent years, especially because of metal music.

Sensing a trend in the market, Ibanez created an eight-string guitar that’s an affordable option for musicians who are looking to branch out on the guitar journey, without having to take a big financial risk.

Since the Ibanez RG8 is a guitar that’s readily affordable for a lot of musicians, you really don’t get a lot of hidden or surprise features with this instrument.

With the purchase of your Ibanez RG8, you should be expecting an entry-level eight-string guitar with great playability and quality hardware. The biggest complaint that most musicians have about the RG8 is that the build of the guitar looks cheap, but looks can be deceiving!

Through my personal experience with this guitar, I actually was shocked at how well the tuning pegs held the tuning of the guitar. If you aren’t looking to upgrade your tuning pegs (which I usually recommend when buying an inexpensive guitar with plans of heavy playing) then these tuners will do an exceptional job of keeping your instrument in tune for a decent period of time.

After playing the guitar for a long period of time (close to six hours of heavy playing) I did happen to notice that the strings went a little flat, but that’s really impressive, considering the price tag of this guitar.

However, the best part for a lot of other musicians is the neck. Most musicians that are upgrading to an eight-string guitar most likely have experience playing a six-string guitar. This means that typically, transitioning to a guitar with a larger neck is going to take time and practice, but with the Ibanez RG8, the neck was comfortable and easy to adapt to!

Build quality of the Ibanez RG8 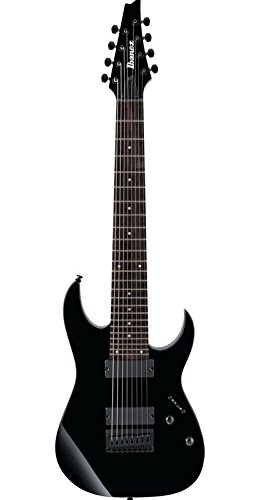 Just like any instrument, this guitar does have a few problems, but it has fewer problems than I was expecting it to!  Based on my personal bias, I really expected that this guitar was going to have a lot of flaws because of the price tag. However, there are more pros than cons!

Pros of the build for the RG8: 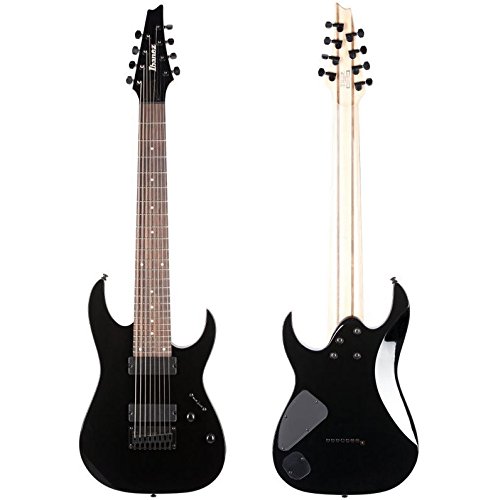 The neck of the RG8 has a really solid build, as all of the hardware on this guitar not only felt good but had a gorgeous cosmetic appeal. The pots on this guitar are also extremely smooth, which isn’t typical to find on a budget electric guitar, as the pots typically are scratchy.

As for the finish on this instrument, it’s a solid black, with no bubbles or scratches on the body. All of the black hardware on the body makes the entire instrument look well put together.

Also, the input jack on the guitar feels incredibly strong, which is surprising to find on a cheaper model.

The Ibanez RG8 is comprised with a Wizard II neck, which is famous because it’s a neck with a slim build that’s comfortable to play. The Wizard II also has a close action, which makes playing fast runs on the neck incredibly easy and effortless.

However, while the neck does a slim profile for an eight-string guitar, it is wide enough to accommodate the extra strings on the guitar. Although, you may be surprised at how comfortable the fretboard is on your fingers which you touch it for the very first time.

The pickups on this guitar are high quality, providing guitarists with both a great clean sound and a great distorted sound that isn’t muddy. They aren’t the highest of quality pickups, but they’re perfect if you’re a beginner or an intermediate musician.

These are passive pickups, which means that the tones that are produced from this instrument isn’t very clear or precise and the bass can overpower the highs easily and quickly. If you play a lot of chords using the 7th or the 8th string, you should expect to hear mostly the root of the chord and the octave and nothing else.

Cons of the build for the RG8: 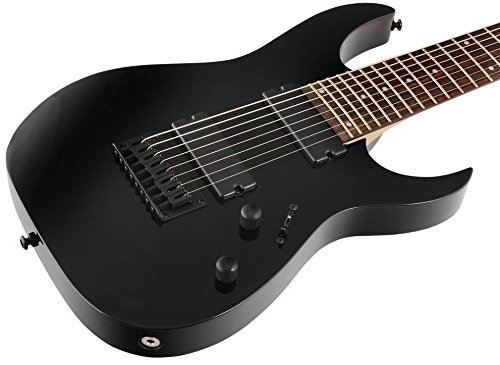 The biggest downside to the RG8 from Ibanez is that there are two sharp fret ends on this instrument. While this isn’t a total deal breaker, it’s not very nice to get frets that are poorly cut, even on a budget guitar.

The stock strings that come with this guitar will cause the fret to buzz for a long while, which can be extremely annoying when you’re trying to play with your new instrument!

The biggest tip that I have for anyone who is looking to pick up the RG8, I would highly recommend that you pick up a set of high gauge strings because the stock strings that are on this electric guitar just won’t hold up very well to playing.

The factory setup of this guitar isn’t great either, while the stock strings do play a large part in this. I did have a bit of a struggle playing this guitar because the instrument weighs a lot more than other guitars that I’m used to playing on. If you’re a professional looking to play on the RG8, you’re probably going to look into replacing the pickups.

Sound quality of the Ibanez RG8 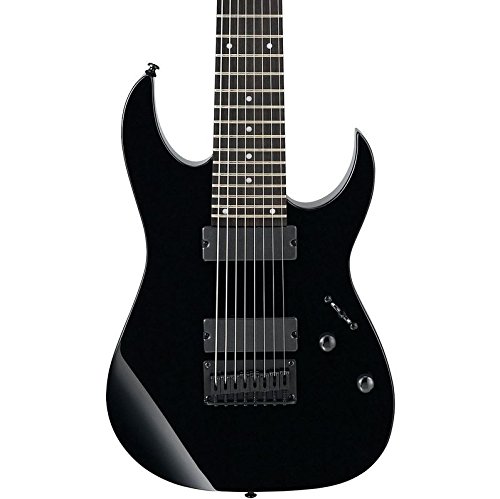 For an affordable eight-string guitar, the RG8 is an instrument that has a balanced sound that was surprising to hear from a guitar that costs less than $400 (For the latest prices and discounts, check here).

The combination of the IBZ-8 pickups and the RG8’s body that’s comprised of Mahogany, there is an incredibly warm tone that’s produced from this guitar, with a noticeable presence in the mid-range.

If you’re looking to have more of your higher range to come through, I found that you’ll only have to do a bit of adjusting on your amplifier. Through my experience with playing around with the instrument, I found that the RG8 also handles down tunings very well, as long as you don’t over distort the sound, as it will make the sound extremely muddy.

On the opposite side of the spectrum, the cleans on the guitar are stable and smooth to use, which is extremely noticeable on the neck pickup. If you’re very specific in the genres you play, the Ibanez RG8 fairs extremely well in both prog styles and death metal.

As mentioned before, if you’re really looking to have your highs be very prominent in your music, you are going to have to do some tweaking! However, simple chords and rhythm playing had a thick and juicy sound.

Playability of the Ibanez RG8

The 27-inch scale on the neck provides musicians with the ability to clearly articulate their music, while also providing the abilities to have longer sustain.

The truss rod is comprised of a titanium reinforcement rod to provide extra support to the neck. What this means for your playing experience is that you’re not going to have to play with high action!

With the extra support from the reinforcement rod, your neck is going to be able to support the tension that the eight strings place on the neck without having to worry about warping either. While the neck isn’t thin compared to a six-string neck, it is rather thin in comparison to other eight-string guitars.

As for the stock pickups that come with this instrument, as well as the bridge pickups, there is a bit of grainy-ness and some bite to the tone, while the middle position does take away some of the gain and replaces that it a punch. The neck position helps to have the highs roll off easily, making the bass line more prevalent and a lot more fun to play!

The Ibanez RG8 is an incredibly affordable eight-string electric guitar that will deliver everything that the majority of beginner and intermediate metal musicians are looking for.

This instrument has a great set of pickups, has quality hardware, and is easy to play on! If you’re interested in purchasing an eight-string guitar that’s affordable, but want to take the quality up a notch, you can swap out the pickups or create a good setup for yourself.

Overall, I was very shocked at the amazing quality that this guitar had to offer. The Ibanez RG8 doesn’t feel cheaply made, has electronics that belong with a guitar three times the cost of the RG8, a smooth and sleek job on the finish, and outstanding tonal qualities.

If I had no idea of the cost of this guitar when playing, it would be an easy guess that this instrument cost around $800-$1000. If you are looking to expand your guitar collection and try out an eight-string guitar, you really can’t go wrong with the Ibanez RG8!