The Gibson Les Paul was first made in 1952, but when sales were significantly down in 1960, Gibson decided to take on a new approach. They took the Les Paul, thinned out its body, and gave it a flat top, a double-cutaway, and a
body contour.

The neck joint was also scooted over by three frets and the neck was made a lot thinner than it is on the original Les Paul. The problem with this design, though, was that nobody clued Les Paul himself in on the design change… and he didn’t like it.

Join millions of music makers all over the world on Reverb. Find deals on new, used, and vintage electric guitars from top brands like Fender, Gibson, Paul Reed Smith, and more.

Check Prices
We earn a commission if you click this link and make a purchase at no additional cost to you.

In 1963, Les Paul asked Gibson to take his name off the guitar, at which point they had to come up with a new name. They settled on the (somewhat boring) name “SG,” standing for
“Solid Guitar.”

The SG was advertised as having the “fastest neck in the world” with low frets and super quick action, but due to the thinness of the neck, it was extraordinarily common for the necks to snap clear in half. In ’62, the neck was thickened up a little bit (although it was still thinner than the SG), meaning unsnapped 1961 SG’s are highly valued to this day.

Epiphone, which was purchased by Gibson in 1957, is also allowed to use the trademarked SG design to produce a cheaper version of the SG, angled mostly toward novice and intermediate players. This review is on the Epiphone G-310 SG, which is a budget version of the famous (if somewhat controversial) guitar. 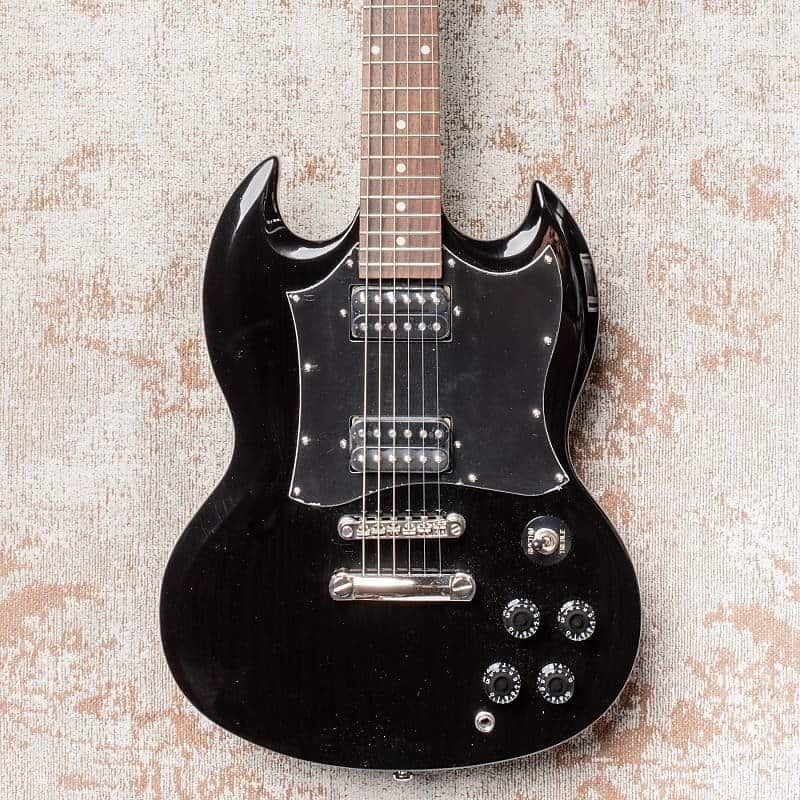 The Epiphone G-310 solid-body electric guitar gives you all the style and sound of the venerable SG at a down-to-earth price.

Quick tip: If an item is currently not available on Reverb, you can select 'Follow this product' to be notified of any new listings.

Check price Buy at Amazon.com
We may receive compensation from the companies whose products we review. We only recommend products that we believe in and test.

Epiphone began manufacturing the G-310 SG over 15 years ago, due to such high demand for a cheaper alternative to the famous Gibson SG.

The G-310 is modeled after the 1967 version of the Gibson SG, which includes double humbucker pickups, rather than some of the other pickup variations Gibson was using in the early sixties, such a single or double P-90s or triple PAF pickups with gold covers.

Read on to learn more about the specs and sound quality of the Epiphone G-310 SG! 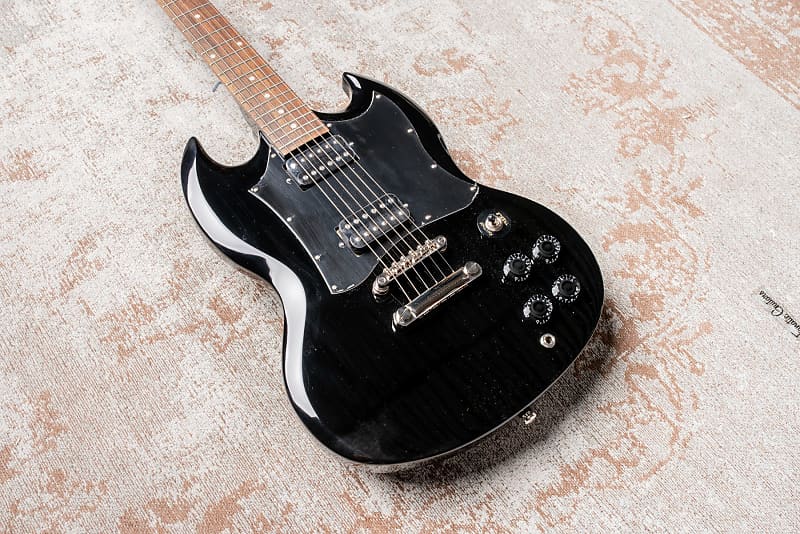 The Epiphone G-310 sounds pretty nice for a budget guitar, but it’s not amazing. The high-output 700T/650R double humbucker pickup arrangement is great for distorted and overdriven tones, such as for rock, metal, and so forth.

However, the guitar definitely lacks in the clean tone department, producing tones that lack harmonic complexity and sound overall quite dull and murky. It seems the pickups and body design require the extra harmonic boosting of distortion to take on more interesting and engaging sonic characteristics.

One major positive side of the guitar is that it produces very little buzz (if any at all), unless playing with extremely high gain, although this is typical of any decent humbucker. The body shape is nice (of course, it’s basically identical to the Gibson SG), and the neck is quick and facilitates speedy solos. 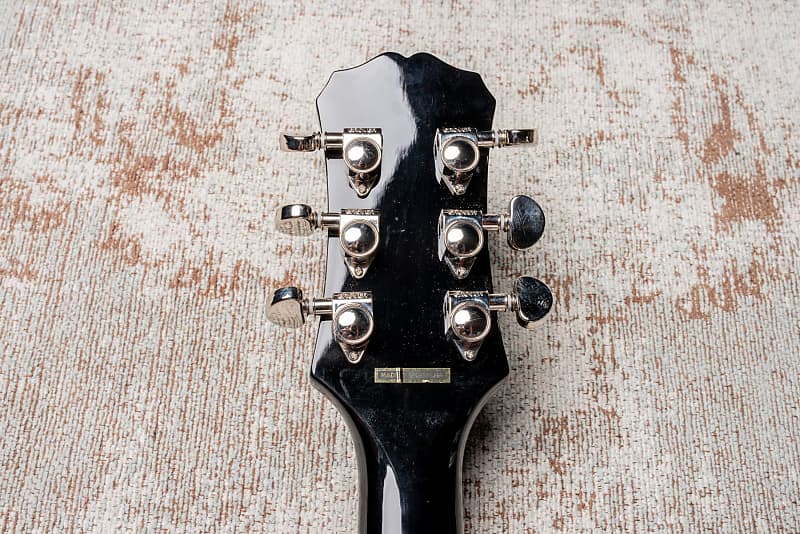 It’s constructed out of quality tonewoods, using mahogany for the body and neck and rosewood for the fingerboard, but the bolt-on neck limits some of the guitar’s potential for warmth, which would probably yield better tone on clean settings.

Overall, for a player who knows they would like to play mostly heavily distorted genres, this guitar will be great. If you don’t know yet what kind of genre you’re interested in playing—or if you like to mix clean and distorted tones frequently—the lack of versatility of the G-310 will not be pleasing to you.

How to find the Best Electric Guitar

The Epiphone G-310 solid-body electric guitar gives you all the style and sound of the venerable SG at a down-to-earth price.

Quick tip: If an item is currently not available on Reverb, you can select 'Follow this product' to be notified of any new listings.

Check price Buy at Amazon.com
We may receive compensation from the companies whose products we review. We only recommend products that we believe in and test.

While I love SG’s and playing through H-H pickups, the G-310 is lacking in too many areas for me to fully back it with a high rating. The lack of versatility in clean tone production is a major turn-off that Epiphone may want to reevaluate. Also, the fact that the cheapness of the hardware is so easily visible is a problem.

The G-310 is a decent guitar for a , but there are better, more versatile guitars that can be purchased for a comparable—or even cheaper—price tag, with the Epi G-310 coming in at about $270.

But don’t take my word for it. If you’re curious, just stop by a music store and check it out yourself!

Join millions of music makers all over the world on Reverb. Find deals on new, used, and vintage electric guitars from top brands like Fender, Gibson, Paul Reed Smith, and more.

Check Prices
We earn a commission if you click this link and make a purchase at no additional cost to you.

I enjoyed the article and the history, but I have to agree with the others. I have a G310 SG that I bought used for $100 and I love it. It sits right next to my PRS and fender Strat. It’s the cheapest guitar I own but also one of my favorites. I think it actually plays easier than my PRS Santana and I can get some of the same tones out of those Humbuckers that I get from my fender Strat. When I add distortion, lookout! The thing sounds amazing when you play a little AC/DC, but also sounds great when playing a blues riff. I used to pick up my Les Paul for the harder rock songs, but unfortunately the Les Paul hasn’t seen much action since I got the G310. It is definitely a diamond in the rough.

I have a cream colored SG- 310 a 2005 model I bought used for $100. I enjoy this guitar totally. It is unmodded, and I intend to keep it that way. It is my go to guitar when I just want to play for a while and enjoy the way it plays. It is a metal guitar for sure, but can be tamed down to sound pretty sweet. I'm no expert, but I know I like this guitar and got it for a good price.

Hi. My main guitar is a Yamaha SG700S but recently I unearthed my childhood guitar - an Epi SG 310. Bought in 1990, this is a 1989 Korean (Samick plant) model, with the open-book headstock. In about 1993 I replaced the pick-ups with DiMarzio PAF Pros and swapped out the tuners for Grover Rotomatics. The tune o'matic, saddles and tailpiece are all original and are poor quality but do the job. The body is three pieces of alder glued together. Don't let anyone convince you the 310's are mahogany bodied - just take a look at the colour of the raw wood if you remove the black plastic cavity plate and scratch a little lacquer away, the wood is a light cream colour. Also, the shear lack of weight means this isn't mahogany - I believe the neck is and that's why the guitar itself is so unbalanced towards the head-stock. However, these are in no way criticisms. I think the G310s could almost be seen as a Fender SG - alder body, bolt on neck, twangy - they're more like a Strat than a LP or even a true SG.

That said, mine stays in tune in all weathers, sustains longer than it should in theory and is so lightweight, it's a lovely guitar to just quickly pick up and play and sometimes I forget I'm playing it and not a so-called 'better' guitar.

Not sure what the quality is like these days but back when they started in the late 80s - they're not bad.

Well, I have to be the devil's (or G310's) advocate. I have been playing since 1980, so i have been around the block so to speak. I am an SG fan. I looked for years for an SG (Gibson or Epi) that was smooth, light, and a slim, fast neck). I have played about 24 of them over the last 3 years and my findings: The 61 Reissue was nice, but way out of my $$ range, and an G310 kicked its butt. I eventually found a 2011, Indonesian G310 that blew me away. It has a neck that I have not even seen on most Gibsons. I have a 2002 SG Faded (with moon inlays). I absolutely hate it. It is chunky, clunky, and besides being lighter and with the Gibson name, my Epi blows it out of the water. I have also put Seymours in it Jazz/JB. This thing plays like butter, and has such a fine cream white finish it's wonderful and smooth. Supposedly there were some great Epi's made in Indonesia. I don't know why. This one also has a very dark neck that looks like Ebony. I have not found this on any other Epi, though it is on my Gibson (which is enony). Anyhow, I would at least try them out. I still look for a Gibson that out does my Epi, of course within a range that I can afford. haven't found it yet. I noticed the Epi "Special" in the photos. Those I would only recommend for beginners. They have nice thin necks though!! Wanna buy a Gibson 2002 SG?

Great comments. I have a 2012 G310 and love it. Bought it Used from GC, excellent condition, red, plays clean and distortion very well. Great sustain. Grover tuners. I am very happy with the clean tones I am getting as well as the distortion. I play fenders and a Epiphone 56 Gold Top w P90s , this G310 fits in beautifully.

Thanks for the insights. I do like the 61 Reissue but happy you found the 2011 G310 to play. Keep making music. It's the only way to live. Danny