Mayones are not the best known guitar brand in the USA. A Polish brand, started in 1982, they’ve been gaining some traction as a quality brand on the other side of the pond, over the past few years.

As they are fairly squarely aimed at metal and hard rock, it’s no surprise to see some seven-string models amongst their ranks.

Mayones do not make budget guitars. These are for the pros. Their Setius range is the closest to a regular Superstrat body, and comes in a huge variety of options. Let’s take a look at the parts, construction and sounds, to see if their high end status is justified. 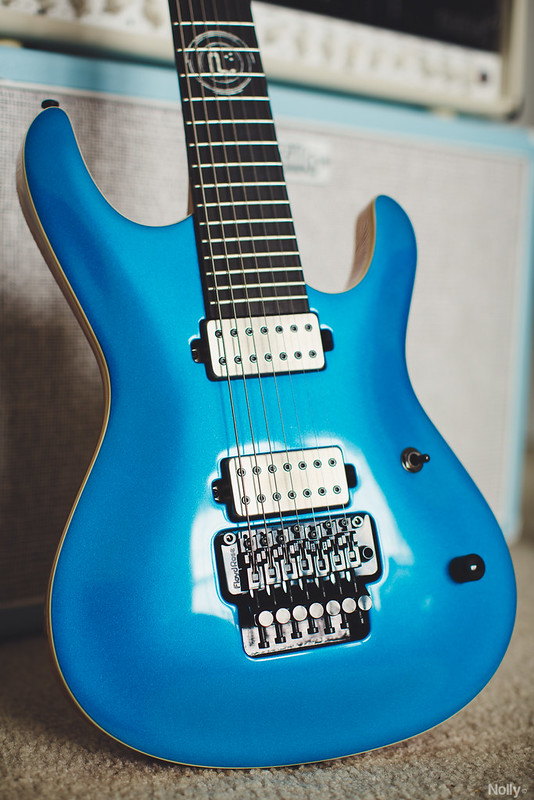 The Setius 7 GTM is beautiful.

Now that’s out of the way, let’s see what it’s actually packing.

The stunning flame comes courtesy of a maple top, sitting on a slab of mahogany. It comes in a choice of seven finishes, and they’ll pretty much amend any hardware to your own needs or wants.

Even just from these core specs, it should be evident that we’re looking at something quite special.

It actually gets a little boring saying that every seven-string guitar will be good for playing metal.

Luckily, the specs of this beauty put it elsewhere, particularly compared to cheaper seven-strings. The maple top should give the tones sufficient warmth that it would be good for hard rock or prog.

I mean, sure, it’ll metal just fine – but it’ll do so much more. It feels like the quality of the parts would be wasted under the high gain generally associated with metal.

Although it’s not specified, it’s likely that the maple top of the Setius will be carved, rather than the veneer of cheaper instruments. You can see on the side of the body what looks to be the maple top – it would be a pretty cheap trick to have the mahogany body, then some generic lighter colored wood like pine or something, and then a maple veneer!

The review model comes with the Seymour Duncan pickups – a Jazz 7 on the neck and a JB 7 at the bridge. They’re pretty classic pickups, the kind that you know you won’t go wrong with.

A GraphTech nut and bridge will ensure that string breakages are kept to a minimum. There’s just a bridge, with the strings going through the body. You could likely get a tremolo of some sort, if you just ask.

The Setius has Schaller straplocks as standard. The machineheads also come courtesy of Schaller. They seem pretty solid, and would do their job.

All of these lovely parts would be wasted if the guitar wasn’t built properly. Mayones have not developed their reputation by being lazy when it comes to putting things together. This Setius is flawless.

The bolt-on neck is perfectly finished, with four simple black screws and washers, indented into the heel. There’s no neck plate, and to be honest, it’s something that highlights the craftsmanship that’s gone into the guitar. It might be difficult to justify a bolt-on neck at this price, but the finish on this demonstrates that it’s taken a little more than

There’s a lack of any contouring around the horns for accessing the higher frets. This might be uncomfortable for some players, but hardly the end of the world.

The 24 frets are perfectly finished on the fingerboard. There are no embellishments on the neck or fingerboard – not even dot markers. There are side dots, but I guess if you’re looking for a guitar at this level, you should know where the frets are!

It’s parts and construction are simple, straightforward, and on point for what this guitar is for.

It seemed pertinent to get this guitar plugged into a 100-watt valve head, coupled with a 4×12 cab.

With the bass set to four and the middle and treble set to six, I put it through a clean channel to start with. As you’d expect, these pickups, on this guitar, had a minimal hum, rather than any kind of overbearing buzz. Single strums on some open chords gave a very satisfying shimmer. It’s good to know that’s there for quiet verses.

Switching to an overdrive channel, and dialing the gain up to four, gave a decent enough crunchy sound. The Setius would do well for experimental blues!

Nudging the gain up to six, and you’re into a happy, hard rock growl. The combination of Seymour Duncan pickups and the mahogany body, softened by the maple, is golden. If Thin Lizzy were to have a third guitarist for even more harmonies at the lower end, this!

Open chords ring out with plenty of middle ground, without being piercing. There’s still plenty of clarity in the notes. Some punk power chords just sound fun. Lead playing through this valve amp, at these setting produces a creamy sustain. Honestly, if you wanted to push the boundaries of classic rock tones, here you go!

Easy and all as it is to fall madly in love with the tones to date, you can’t help but dial that gain up to eight, just to see what happens. The Setius djents, for absolute sure, but you can’t help but feel that it’s a bit wasted on it.

There are so many seven-string guitars out there aimed so squarely at metal players with a high gain sound, it’s difficult to imagine why they wouldn’t want something made for them.

There’s honestly not too much to say about the playability of this instrument. Its playability matches its price, parts, construction, and tones.

This is a professional instrument, and it feels it.

The weightiness of the mahogany/maple combo means this isn’t going to be the easiest guitar for running around with. It’s very much a player’s instrument.

The strings come with a lovely low action out of the box. The frets are cleanly finished on the edges of the rosewood fingerboard, making it incredibly comfortable to play. If you’re playing a lot on the higher frets, it may not be the most comfortable.

The Schaller machineheads gave no issues whatsoever, and held in tune right throughout the review.

While there’s no question that its playability is superior, you can’t help but feel that it might feel like a “special occasions” instrument, for important shows and recording sessions, rather than an instrument that you can just run around, and have a good time with. It might be too good for having at a practice session with beer and pizza all over the place.

That may be a sticking point for some players. Sure, it’s enjoyable to play something that sounds so great, but you may not be able to help to get precious about it, which may detract from the fun aspect of playing.

Some Alternatives to Try

It’s interesting that alternatives at this price point seem to be largely made up of signature models.

On that note, and given the classic rock and Thin Lizzy references earlier, here’s Gibson’s limited run of their Les Paul Standard with a seventh string.

This shares a lot of the specs as the Setius: the mahogany body with a flamed maple top; Seymour Duncan pickups, including a JB at the bridge; rosewood fingerboard. If the tones and playability of the Setius sound good to you, but you’d favor a more traditional looking instrument, this could be right up your street.

Similarly to Mayones, Caparison Guitars aren’t the best known of guitar brands, but what they do, they do very well. A Japanese brand, they have included a seven-string model in their Dellinger range.

This is perhaps aimed more at speed players. The body comprises a maple back and a light ash top, it’s got a bolt-on neck with a pretty unusual joint design revolved around some brutal contouring, to improve access to higher frets. It also features their own pickups and an ebony fingerboard. Nice.

There are few artists more synonymous with seven-string guitars than Rusty Cooley. His Dean USA Xenocide model has an all-mahogany body and a pair of EMG pickups. If you’re after a high-end guitar that’s designed more for shredding, this is well worth a look.

Apart from the fairly eye-catching paint job and fingerboard inlays, you’ll notice the inclusion of a Floyd Rose tremolo. Beyond that, the actual features of the guitar are very simple: two pickups; a single knob for volume, three-way pickup selector… and that’s it!

The Mayones Serius 7 GTM is such a fine instrument. Anybody who gets one of these in their collection is very lucky indeed.

While it does indeed djent, players who favor lower gain, classic or prog rock tones are likely to get a lot more out of this guitar. This is one that’s crying out to be gently overdriven so the nuances of its tonal capacity will reach the audience.

I would recommend this guitar very much indeed for working musicians, looking for a solidly built instrument, but with enough options available directly from the manufacturer, so that the cost won’t be getting pushed over into the bank-busting custom model route.