Ibanez is a brand that has been around forever, and has its market fairly well nailed at this point. It’s a brand for the shredders, and no model is more synonymous with that than their RG models.

The Iron Label series of RGs is designed specifically for metal players. Ibanez are very explicit that they’re not even trying to aim this guitar at anybody else. All Iron Label models are priced within the intermediate price range, with the RGIT20FE having some of the coolest features.

So, let’s take a look and see what it offers!

When a company announces that they’re releasing a range of guitars aimed exclusively at metal players, the parts that they’re going to use to implement that claim can be somewhat predictable.

But this really isn’t the case here.

I did say it had some of the coolest features! For the price range of this guitar, there’s actually quite a bit going on. While the surface-level playability is traditional, straightforward and simple, there is some fascinating stuff going on with its parts and construction.

Metal, metal, and more metal. Don’t play metal? Ibanez has no interest in you even looking at this guitar.

More specifically, though, it’s aimed at speed metallers, the ones who need to be able to play very, very fast.

So for an intermediate guitarist, who has been building up their speed playing on their beginner model, and are looking to apply it to a higher quality instrument, this Iron Label RG should leave them very impressed. 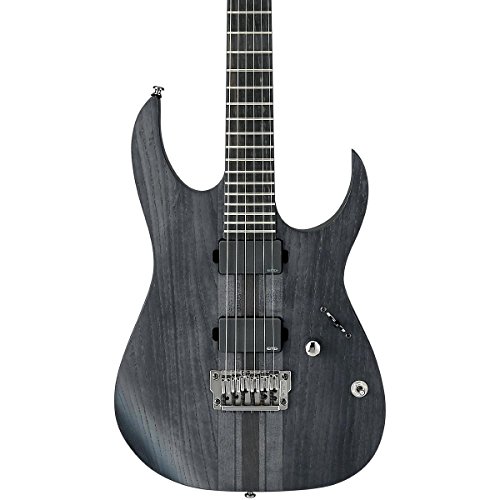 There’s some pretty interesting stuff going on with the parts of this guitar. At first glance, you’d be forgiven for thinking it was just another Superstrat for metallers, what with its shape and EMGs.

But one of the things that stand out for me is the use of ash as the tonewood for this guitar. Ibanez has a tendency tofavorr basswood, even on some of their more expensive models, and ash isn’t a popular option for humbucking guitars anyway.

We can talk more about how that might affect the tone when we plug in later on.

The other relatively fancy aspect of this guitar is the ebony fingerboard. 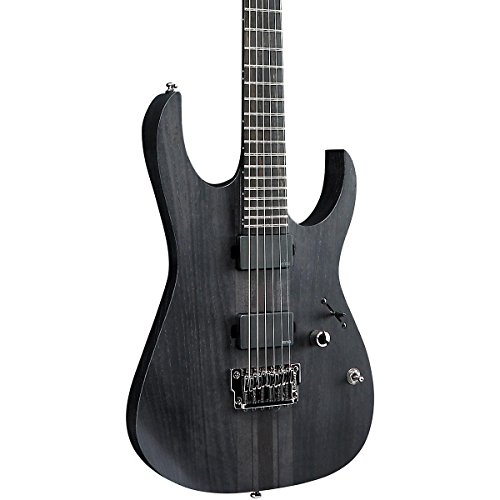 Apart from the choice of wood being used, the hardware and electronics are fairly standard for a respectable metal guitar, namely the use of EMG pickups and Gotoh machineheads.

I always find it indicative of the quality of a guitar when certain parts are outsourced. To me, it’s the guitar brand or manufacturer saying “You know what? We’re not too proud to admit that these external companies make these parts better than we do.”

One of my favorite things about the construction of the RGIR20FE is being able to see it, rather than it being hidden under layers of paintwork.

I love being able to see the through-neck with the ash wings. It provides the manufacturer with a little extra challenge: balancing high quality tonewood with aesthetically pleasing selections. It’s likely that choosing a trans finish is to demonstrate their ability at doing this. There’s nowhere for shoddy workmanship to hide.

It’s a very fine piece of work, and the heel of the neck looks especially tasty.

Looking at the parts, and there’s not actually too much to say. The pickups and bridge have been cleanly and carefully inserted in that beautiful body. The Gotoh tuners look sturdy and are perfectly aligned.

The neck and fingerboard is a thing of beauty. The ebony fingerboard is devoid of any embellishment, not even some simple dot markers. The fretwork looks decent.

The electronics are a simple affair: humbuckers are connected to a single volume control, and a standard three-way selector switch. Oh, and there’s a killswitch, just for fun.

As standard practice with RGs, this comes with a super-slim neck for the purpose of keeping playing light and free, so guitarists can shred more.

All in all, the parts and construction are pointing towards a great guitar.

When reviewing intermediate guitars, I generally use a 50 watt, 2×12 hybrid combo. It just seems to be the kind of amp the intended player of intermediate guitars would own. My own EQ preferences are: bass at six, and middle and treble each at four.

It’s always good to play through a guitar a bit before plugging it in. It will identify any issues with the guitar that can sometimes get covered up by the volume and overdrive of an amp. With this RG, I can’t detect any fret buzz or anything, and everything sounds fine. You can actually hear the resonance of the ash – that bright, hard sound is eyeing up some shredding. 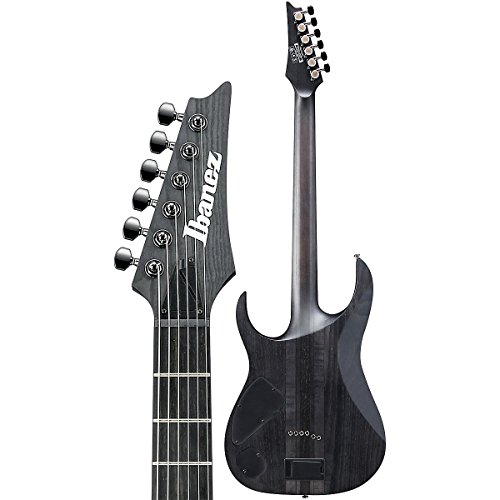 I feel a bit silly doing it with such a metal guitar, but in the interest of a comprehensive review, it must be done: I plugged in the guitar, and switched it on to the amp’s clean channel.

Between the three available pickup options, selecting both is the only one worth talking about. I just can’t think of an everyday, practical use for either pickup by itself on a clean setting. This isn’t why you bought this guitar! Both pickups are fine for when you’re taking a minute when you need clean and clear ringing notes. Beautiful.

Let’s do what you’re supposed to do with this RG though, and switch to an overdrive channel, with the gain dialed in at a healthy seven.

The bridge pickup is your best friend here. There’s no doubt that tone will cut through every other sound if you’re playing with a band. Selecting both pickups is fine for rhythm playing. I’d suggest it would work best with single strums to accentuate a phrase during verses, as well as power chords.

Switching to the neck pickup, and you’ll be in control of a beast accentuating the lows for a all the metal riffs.

The RGIR20FE is very much a guitar you won’t want to put down. It’s very much aimed at a certain type of player, and they won’t be disappointed at all.

Blossoming shredders will be very grateful of the neck in particular: it’s slim, smooth and fast, thanks to the design itself and the lovely ebony fingerboard. Couple that with the tones available from the ash and the EMGs, and you’ve got a bit of a gem in your hands.

The one slight sticking point for me was the lack of contouring, especially around the cutaway horns. It might make reaching for those higher frets just a little bit easier.

Apart from that, it’s a solidly built, highly playable guitar. Despite being so squarely aimed at metallers, with the range and quality of tones, I feel there’s some potential interest from prog rockers that might not be getting tapped into.

There certainly is no shortage of Superstrat alternatives on the market. If for any reason you think the RG IR20FE is too much, or too little, there are a few others to consider. 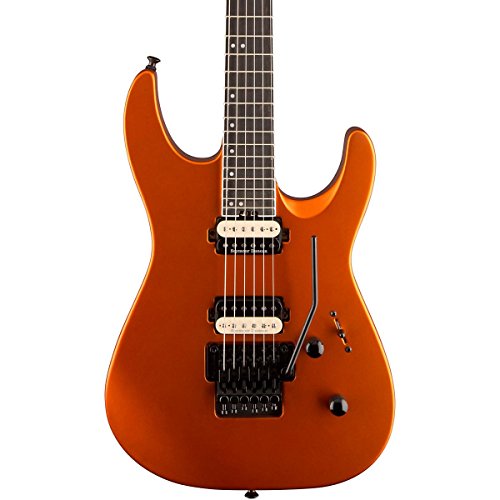 The Jackson Dinky is as iconic a Superstrat brand and model as Ibanez and their RG. The Pro Series DK2 is about equivalent to the RGIR20FE. It also features neck-through construction, but has an alder body and maple neck.

The Dinky comes loaded with two Seymour Duncan humbuckers, and a Floyd Rose tremolo. As with the Ibanez, the neck of the Dinky is focused on speed playing., with a slim profile and ebony fingerboard. It also has contoured horns for easier access to those higher frets. 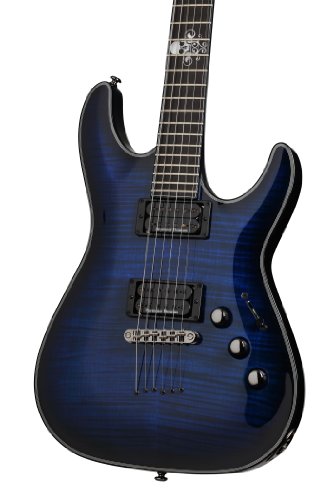 Schecter have a Superstrat model called the Blackjack. The SLS C-1 version of it is pretty cool. It has set-neck construction, with a mahogany body, which has some pretty tasty shaping, and pretty binding. It has a three-ply maple neck, and also has an ebony fingerboard.

The Blackjack has active pickups, but rather than the standard EMGs usually found, these ones are in fact made by Seymour Duncan. There’s nothing about this guitar that emphasises speed playing though. It doesn’t mean it can’t be done! 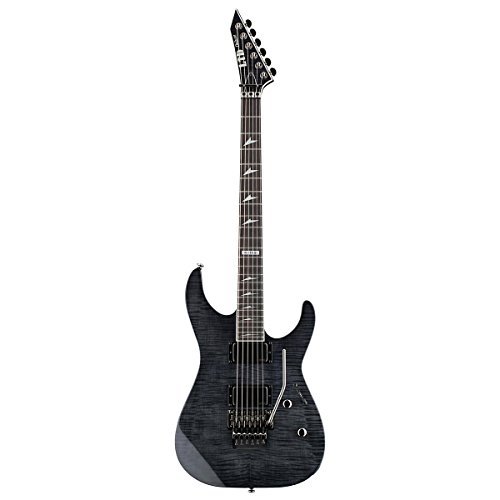 ESP have the M-1001 from their LTD range. This one seems like a mash-up of the other guitars we’ve looked at. It features an alder body, with an incredibly pretty maple top. If you’re looking for a guitar with immediate wow-factor, here you go.

An interesting point on the pickup configuration, is that it has an EMG 81 at both the neck and bridge position. It’s an unusual choice, but not necessarily a bad one.

It has a three-piece maple neck, designed with an ultra-slim profile, and a Floyd Rose tremolo. Yep, this one’s for speed players.

The materials and construction of the Ibanez RGIR20FE reeks of quality, with the guitar actually being manufactured in the east to keep costs down.

Metal-inspired players will be delighted with it, espeically if their beginner guitar was one of the cheaper RG models.

I assessed earlier in the review that this would be for intermediate guitarists who were developing their speed, but needed an instrument that matched their progression as a player. I’m happy to conclude that Ibanez absolutely nailed it.