Ah, the humble but mighty Telecaster. Essentially where it all began for mass production of electric guitars, with a design that has remained true to itself over the years.

An ever popular choice amongst indie guitarists and country players alike, the Standard Telecaster is an aspiration of many guitarists, so when they’ve overcome getting their fingers around chord shapes and are ready to invest in a better instrument, it’s a popular choice.

It’s always going to be difficult to write about something that’s so revered in the industry, mostly because they’ve been around a long time, but let’s take a look at this anyway. 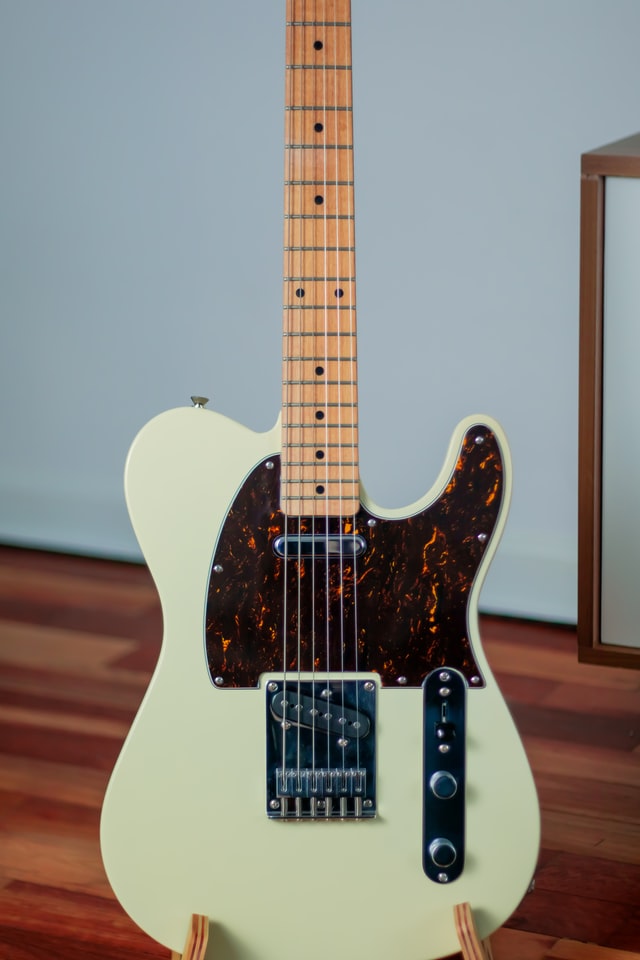 The tricky thing about reviewing a Telecaster, or any of its derivatives from other brands, is that the reason its design has stood the test of time is its simplicity.

The core elements of the current Standard Tele is an alder body, with Fender single coil Tele pickups.

It’s all very much, well… standard! There are no surprises here. This is exactly what a Telecaster should have, and has been this way for over 65 years. 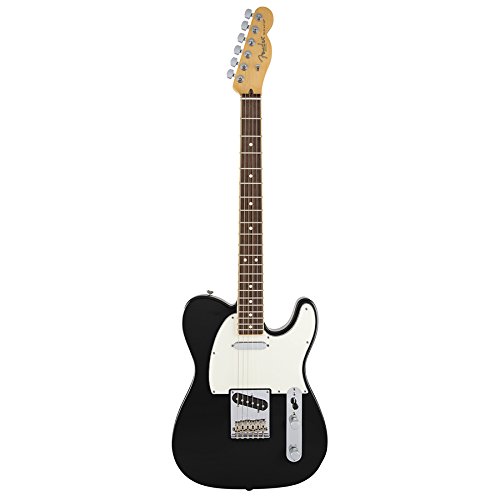 Fender American Standard Telecaster Check Price
We earn a commission if you click this link and make a purchase at no additional cost to you.

Predominantly any kind of rock, pop, blues, country. It can be modded for metal and jazz, but a guitar tone that fits in with four genres, as mentioned, might indicate that it’s close to perfection.

With this adaptability in mind, it makes a lot of sense for intermediate guitarists to take a look at the no-fuss Tele, particularly those who are either still trying to work out their own style, or those who want to apply their learning across a range of styles.

So let’s take a look at the Standard!

Taking a look at the parts of the Telecaster, and it’s a no-frills affair for a no-frills guitar.

Throughout the review of the guitar, we’ll keep returning to this point: simplicity for mass production.

When going through Fender’s own marketing material for the Standard Tele, its main selling point seems to be that it is a Telecaster.

It comes with an alder body, which generates a nice bright tone. All the additional parts are stock, standard Fender. This includes the pickups, which, combined with the alder body, is where the familiar Tele twang comes from.

These pickups are connected to the three-way selector switch, and two knobs, one each for volume and tone.

Currently, the Standard Tele only comes with a maple neck, as opposed to previous years – or indeed with current Standard Stratocasters – where rosewood is an option. There are 21 shiny frets, and black dot inlays embedded in the said fingerboard.

After that, it’s standard Fender machine heads at one end, the standard Tele bridge at the other, and away we go. 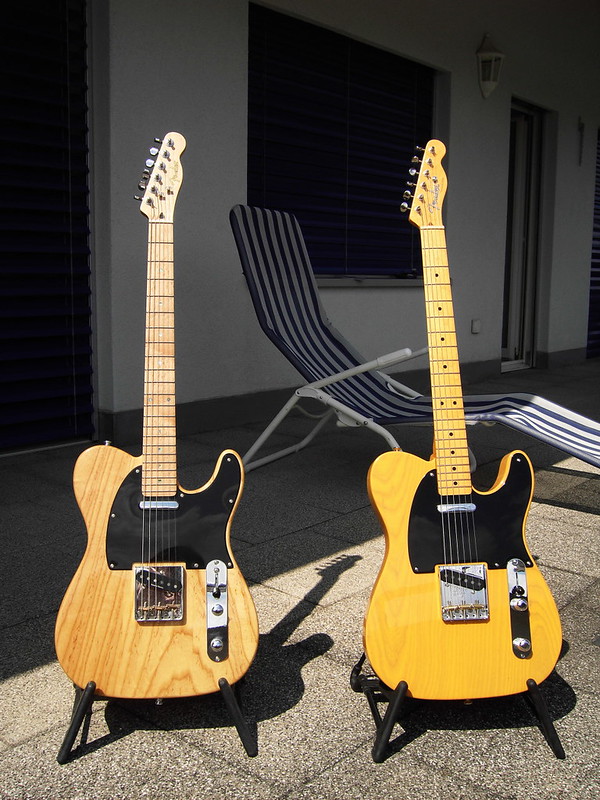 In terms of construction, simplicity for mass production was, again, Leo Fender’s primary concern, and so it was this approach that inspired the bolt-on neck, found in so many guitars to this day.

The methodology is so straightforward: take one alder body; cut out space for a maple neck; put said neck into the said body; fix in a neck plate, and insert four screws to hold it all together. Very simple, yes?

Fender has been doing this a long time, so needless to say, their best practice is nailed by now. There’s nothing to fault with that neck joint. 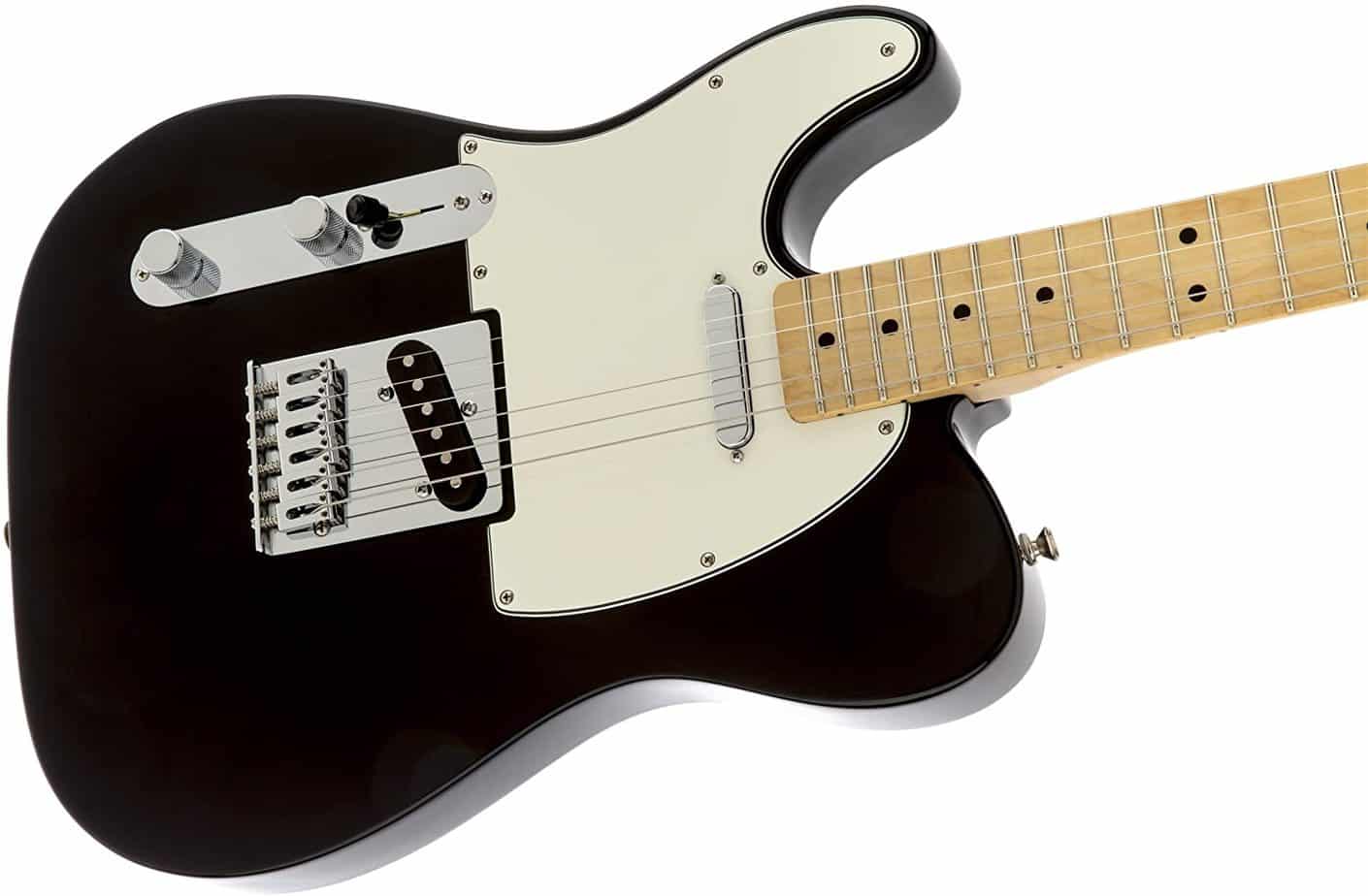 After that, the chrome hardware all looks right and sturdy. The pickups and bridge are cleanly fitted. You can’t ask for much more than that really.

The neck looks very lovely. It’s made with Fender’s C profile, and a smooth finish, which is alleged to allow comfort for contemporary playing styles. The machine heads at the top of the neck look fine. They’re not Grovers or anything, but they look like they’ll hold a tune.

It’s easy to frown upon Mexican-made guitars, but Fender wouldn’t continue doing it if the quality of the instruments leaving the factory there would compromise the brand.

Fender American Standard Telecaster Check Price
We earn a commission if you click this link and make a purchase at no additional cost to you.

This is going to be a fun part of the review to consider. How do you get specific about the tones of a guitar that sounds like most things? I’ll do my best. I opted to listen to the Tele through a 50 watt, 2×12 hybrid amp. I’d consider it to match the needs and price of an intermediate guitarist who is seeing what this guitar does.

There’s a reassuring brightness that you come to expect from a Telecaster, evident from some strumming before it even goes into the amp. There’s a tiny bit of fret buzz, but that’s really nothing a set up wouldn’t resolve. Plugging into the amp’s clean channel, and the stock Telecaster pickups are a little buzzier than I’d like. With such solid construction, you can see why seasoned players would take the Mexican Tele and upgrade the pickups to make a nicer-sounding guitar. Of course, any buzz is negligible once you start playing.

With the amp’s bass at four and middle and treble each at six, on the bridge pickup, the sound was loud and high. It may be useful for some clean solos in the country, or maybe blues. I had to roll off the tone dial to make it slightly thicker, but that’s my preference.

Selecting both pickups is this reviewer’s favorite though. It just adds a little bit more beef, perfect for rhythm playing. Cranking the volume brings it to just a nice breaking point for some blues licks and solos. The sound of the clean neck pickup seems like it would be best suited to slide guitar on a country ballad.

Moving to the overdrive channel, with the gain set to five, and you’re rocking. It intensifies the buzzing, but that just means you need to get playing.

The neck pickup – again with the tone rolled off, and maybe even the volume – is great for rock solos. Selecting both pickups will leave you open for the business of Stones-esque riffs. The neck pickup by itself is an odd beast. It’s closest in suitability to grungey, power chord riffs really, but it’s still got a bite to it.

A guitar doesn’t stay on the market for over 65 years without people wanting to play it.

The simplicity of the guitar’s tones, construction, and parts, is what allows it to traverse a range of styles, meaning there is plenty for the intermediate guitarist to explore or experiment with while developing experiences of different styles.

The finish along the edges of the fingerboard are clean and smooth. The C-shape neck is very comfortable to play, and the smooth finish makes soloing a little easier, especially in switching from open chords to playing up at the higher frets.

There’s nothing really to a fault in terms of the playability of the instrument, but you can feel the difference between it and a professional level model.

An intermediate player will be incredibly satisfied with the upgrade from their model.

There have been plenty of variations on the Telecaster over the years, so credible alternatives are not that difficult to find.

If the pennies don’t allow for the Standard, Fender’s budget, Eastern-made offshoot has some credible offerings. Whilst Squier are cheaper guitars, there are plenty of debates raging questioning their quality against a Fender. Their top Tele is the Classic Vibe Custom.

Quite frankly, running through the specs of the Squier, it’s not difficult to see why it’s contentious. The parts and construction are largely identical, but for less money, due to cheaper manufacturing costs. The main difference is the use of alnico V pickups, which apparently delivers a more vintage-voiced tone.

Looking at a couple of hundred bucks in the other direction from the Standard is Fender’s very own American Standard Telecaster. While some players are happy to get the Standard and upgrade the pickups, others may prefer to just spend the money on an American.

So what do you get for your extra dollars? Well, there are a few little bits that justify the cost. Firstly, it’s made in the USA, so you’re looking at a different level of quality and craftsmanship. The body has had a little bit of contouring for comfort; the pickups come from Fender’s Custom Shop and it includes Fender’s Micro-Tilt function.

I always feel bad reviewing a Fender without acknowledging Leo Fender’s work after he left the company. At G&L, Leo developed the ASAT guitars, which were clearly a direct descendant of his earlier work.

The ASAT Deluxe, from their Tribute series, has some pretty notable differences from the Fender family ones. The tonewood of the body is mahogany, and it comes equipped with humbuckers, rather than single coils. These humbuckers are coil tapped for getting single-coil sounds, but still, humbuckers.

Ultimately, the Fender Standard Telecaster is all about the no-frills approach to guitar design. If that matches your approach to playing, the Standard Tele is definitely a good fit before taking the leap into professional-level instruments.

The playability of the Tele, and the access it gives players to such a range of styles, is a definite win for guitarists with interests in multiple genres, or for those trying to develop their knowledge and experience of a range of guitar playing styles.

Overall, not a bad review, except for the comments about USA manufacturing giving a different level of quality and craftsmanship, I own several guitars, made in diverse places, and honestly, Japanese quality beats everything else. Then it becomes a tight competition with Indonesia, South Korea and the USA, and lastly places like China and Vietnam. I have an American made Gibson SG, and a couple of SG style guitars from Indonesia and Korea - and honesty - from a value perspective the Asian brands beat the USA.