The V was one of the original designs Dean Zelinsky introduced when he launched Dean Guitars in 1977, and it’s had a consistent presence in their catalog ever since.

The Stealth version of the V has been out for a little while, and was designed to offer players as high a quality V as possible, but still affordable. This is an ideal approach for intermediate players, who are looking for a higher quality instrument, without the need for committing to the cost of a high-end, professional instrument.

So, let’s see what it has going on!

Getting a detailed description from Dean about the Stealth isn’t easy. At its heart, is a mahogany body with a maple top. It’s not clear if this is an actual maple top or a veneer.

The stand-out feature is an ebony fingerboard on a guitar at this price.

There’s not really an awful lot more to say about it. It’s one of those instruments that’s focused on keeping a simple formula for construction but using high-quality parts to complete a desirable and playable instrument.

Given the presence of a set of EMGs, the Stealth V is pretty much ready to go for hard rock and metal.

The body shape, and the fact that the only finish available is black, does perhaps lean it a little bit more towards metal.

This one is for the players who want that classic Dean shape, but don’t have the $1k+ to go on a USA model, and this really is a perfectly acceptable compromise. Think of it as Dean keeping an in-brand equivalent to the relationship between Gibson and Epiphone guitars.

As mentioned, the parts on this guitar are as high quality as intermediate-level guitars go, and all contribute to a none-more-black instrument.

The EMG 85 and 81 in the neck and bridge positions respectively are a popular pickup configuration for a reason, and anybody even looking at such a configuration will have an expectation from them.

Dean has employed Grover to take care of machine head duties. As with the EMGs, this is a popular choice based on their reliability. They’re securely fixed to Dean’s traditional V-shaped headstock design.

A Tune-O-Matic bridge is included – I don’t recall ever seeing one in a black finish before. Strings go through the body, with the wood on the top side protected by one of Dean’s metal plates, that sets the string holes in a V shape. Personally, I love these. I haven’t determined any value for it sonically, but I think it looks cool!

The white binding on the body and headstock breaks the black theme and gives a touch of class to the guitar. It feels like a subtle visual effort to demonstrate that it’s a superior guitar.

The Dean brand had a rough time with its image during the 90s, due to the appalling quality of their imported guitars. Luckily, those days are firmly in the past, and these days, Eastern-made Deans are awesome instruments. This reviewer has owned one!

That build quality is very much evident in the V Stealth. One of Dean’s trademark points of construction in their Vs, is the little extra bit of cutting where the neck joins the body, ensuring those higher frets are as accessible as possible. It’s a subtle point of design that has a large impact on playing.

There are no surprises with the quality of how the hardware is attached to the guitar.

The neck is perfectly fitted to the body. The neck has a nice feel to it – not too slim, not too fat. That should appeal to a wide range of players. When it’s the only model Dean have at this price, I guess trying to aim for a middle ground makes sense.

The neck is smooth, but the finish doesn’t seem to be specifically geared towards speed playing, as is popular with some pointy guitars. The same can be said of the ebony fingerboard

I plugged the V into a 50 watt, 2×12 hybrid combo, as it seemed a likely candidate for the type of amp the owner of this guitar would be playing through.

Active pickups, such as the EMGs, are a contentious point with guitarists. They’re designed to reduce noise and have a higher output, the latter point of which indicates the appeal for hard rock and metal guitarists.

Some chords and licks before plugging in, demonstrate a good setup out of the box.

I started on the amp’s clean channel, with the bass set to four, and the middle and treble each set to six. Given the metal focus of the guitar, it seems pretty unlikely that owners will hang out much in this part of its sonic spectrum, but there’s no harm in seeing what’s going on there.

The hot EMG 81 in the bridge position gives the bright sound you’d expect. It’s reminiscent of the bridge/middle pickup setting on a Strat. Selecting both pickups is usually a personal favorite anyway, and here, it’s no different. I’m thinking that with a touch of reverb, it would work relatively well in achieving sounds akin to Nothing Else Matters – not all metal is heavy metal! 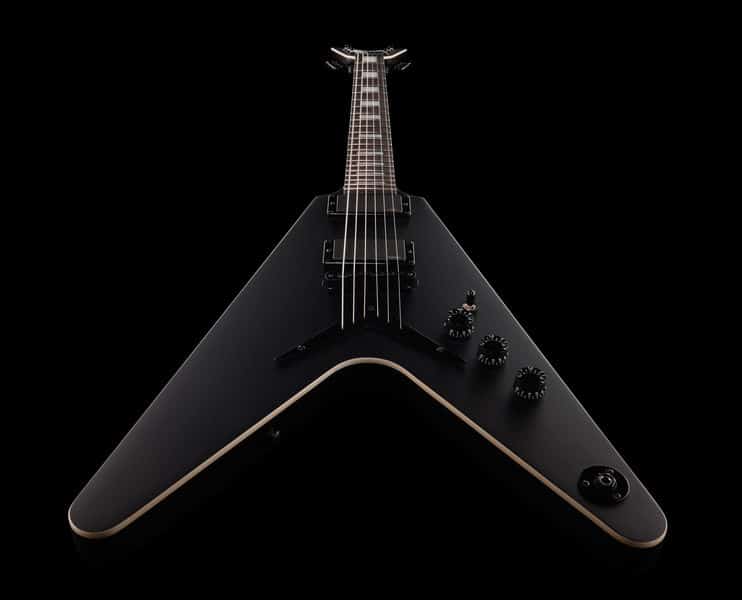 Switching to the amp’s overdrive channel, and dialing the gain up to six, you’re very much in the zone for hard rock. With the bridge – and even with both pickups – selected, the combination of mahogany and EMGs bring a wonderful presence to the notes played.

Cranking the gain just a smidgin further, and it sounds a lot like metal! The clarity of the bridge pickup continues to provide presence for solo work, while there’s enough cajones in the bridge pickup to satisfy any riffing needs.

V-shaped guitars are generally very fun to play. They’re very much for standing up and looking badass though. They are not sitting down guitars.

It was interesting that with binding on the body and headstock that there was none along that lovely neck. Regardless, the edges of the fingerboard are perfectly smooth, and there’s not a hint of sharpness.

The ebony fingerboard is such a key point in highlighting the enjoyable playability of the V Stealth. An intermediate player investigating better quality instruments from their beginner outfit is sure to be overwhelmed when comparing it to other instruments during the research stage.

The neck is incredibly comfortable to play, but that is something that’s subjective to player preference. If a player’s beginner instrument has a very slim or very fat neck, they might find the V’s neck weird at first.

It is difficult to ascertain how much impact the alleged maple top has on the tone.

If you find yourself intrigued by the flying V body shape, there are plenty of companies offering products in a similar price range to the Stealth V.

Gibson was the company that first brought out a flying V guitar, in 1958. Alas, all the points were a bit radical for the time, and its run was short-lived. The flying V from their Government series (link to website) is the model closest in specs to the V Stealth.

The Gibson shares the mahogany body, black hardware – including Grover machine heads and a Tune-O-Matic bridge – and hot humbuckers. The humbuckers are Gibson’s own Dirty Fingers+ This guitar has a great story, in that it was made with wood returned to Gibson by the FBI after being confiscated some years ago.

Schecter Guitar Research has established itself as a bit of a go-to brand for metal guitarists, so if you’re looking for V-shaped guitar, they’ve got a few options. As with the Dean, the V-1 Platinum comes with a mahogany body and ebony fingerboard, but with a maple neck.

It also comes equipped with active EMG pickups – a 57 at the neck and a 66 at the bridge. Compared to the 81 and 85, these are designed to retain the high output and noise reduction of EMGs, but with a voicing reminiscent of some of the great vintage humbuckers of old.

Another brand very much associated with metal guitars is ESP. Their LTD instruments are their Eastern-made affordable range. Aesthetically, the Arrow-401 (link to website) has a curve cut into the split of the V. Unusual, but pretty, right?

This shares the EMG 81 and 85 pickup configuration with the Dean, controlled with a single volume knob. It also features black hardware – a recurring theme throughout the instruments in this review. The stand out feature on this guitar is the inclusion of the Floyd Rose tremolo.

The Dean V Stealth is a pretty phenomenal instrument in this price range, and I’d highly recommend it for an intermediate player, with a penchant for pointy guitars.

It combines great parts and construction, with the affordability of being manufactured in the east. Additionally, it’s a lot of fun to play, with high-quality tones, courtesy of the EMGs and mahogany, the beating heart of this fine instrument. 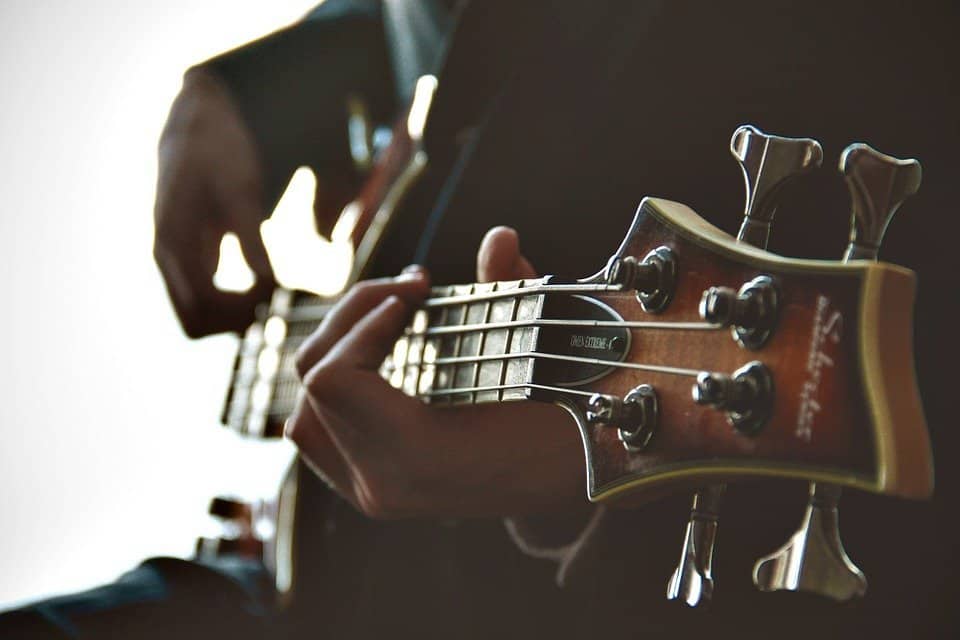