This is a bit sexy.

In case you’re not familiar with BC Rich as a brand, they mostly make very pointy things, aimed very, very squarely at metallers. More than that, the vast majority of their range is manufactured in the east, so they’re usually very cheap.

Their cash cow is definitely their Warlock model, for $200-300, in black, adorned in various stickers, certain to include one with the logo for Monster energy drink, and played by teenagers.

With this brand image, it will probably surprise people to see that they actually have a limited number of higher-end guitars.

The Warlock shape will always be the most core of its core features. Look at it! It’s pretty inimitable. There are two important features to note, which put this Warlock head and shoulders above its budget counterparts.

Firstly, the body is made of solid mahogany, and secondly, it has through-neck construction.

For some extra dollars, you can replace the pickups with Dimarzio PAFs, which might work better if you don’t play heavily driven sounds. 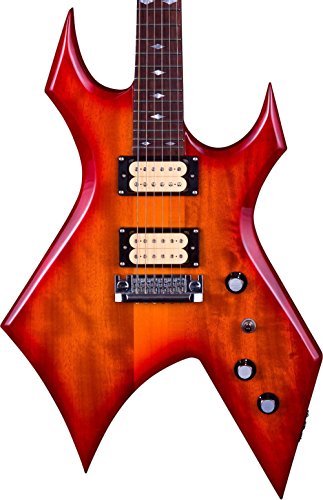 With its stock pickups, this could not possibly be aimed anymore at metallers. Its pointy nature is a bit of a giveaway.

Putting the aesthetics aside for a minute, the quality implied by the specifications – particularly the option to upgrade the pickups – demonstrates that BC Rich are aiming for a more particular market segment than “kids who like the pointy ones.”

There’s also an impression that with the coil tapping option, BC Rich is trying to appeal to an audience beyond metal. We can see how that might work later in the review.

No, with a model like this, they’re looking for a more seasoned player, who enjoys the Warlock shape, but whose experience has given them more nuanced desires, and a higher expectation from the instrument they want to play.

The review model has the stock BC Rich pickups. In terms of looks, they’re identical to the DiMarzios. But with the high output claims, I’m expecting something that will really excel at high gain and volume – that’s what high output pickups are for. I’m curious as to what coil tapping will introduce. I’m not the biggest proponent of that.

With a trans-finish like this, BC Rich takes on the extra challenge of selecting mahogany not just for its quality, but also for its aesthetics. They’re not hiding behind a flamed maple veneer or layers of paint.

The Mk9 has BC Rich’s own Quadramatic bridge, which is essentially a stoptail of their own design. It looks sturdy and solid.

There are two-tone knobs and a volume. The knobs themselves are chrome, with black bases. I’ve never seen it before, but they do fit well with the overall appearance of the guitar.

The thing about this particular guitar, even more than with other guitars I’ve seen, is that there is absolutely nowhere for points of shoddy construction to hide.

BC Rich take pride in the heel-less neck joint of the Mk9. Heel-less does seem a bit generous – it has to have at least a little bit of a heel, otherwise, the body would be the same thickness as the neck. That’s just ridiculous.

Still, the little bit of a heel is very minimal, about an inch or so. When you turn the guitar around and take a close look at the construction that went into that, you can’t help but raise your eyebrows because of the highly impressed expression on your face.

The rosewood fingerboard is straight and even. BC Rich’s diamond inlays are embedded along the way, and the fretwork looks fine.

Looking at the headstock, it’s got BC Rich’s own stock machine heads, but the abalone inlaid R certainly lends a touch of class to the instrument. This Warlock is a pretty weighty 15 lbs, and overall, I can’t find anything in its parts or construction that causes concern. Obviously, though, guitars are won or lost on their tones and playability.

As an intermediate guitar, it’s unlikely that someone who owns the Mk9 will be playing through a small amp, but it’s unlikely they’ll have committed to a nice valve amp either, so a hybrid seems the right call for testing its tones.

At the same time, it’s for metallers, and they have a tendency to favor big and loud. A 100-watt hybrid head was selected, paired with a 4×12 half-stack cab.

Plugging in, and turning on to the amp’s clean channel, you honestly feel a bit silly – does it look like this guitar was designed for playing clean sounds? I think not.

Anyway, the stock BC pickups are a bit buzzy, which isn’t terribly surprising. Once you start playing, the tones actually aren’t too bad. If your repertoire contains, clean melodic breaks, this Warlock could pull that off pretty well, maybe with some chorus or reverb thrown in. 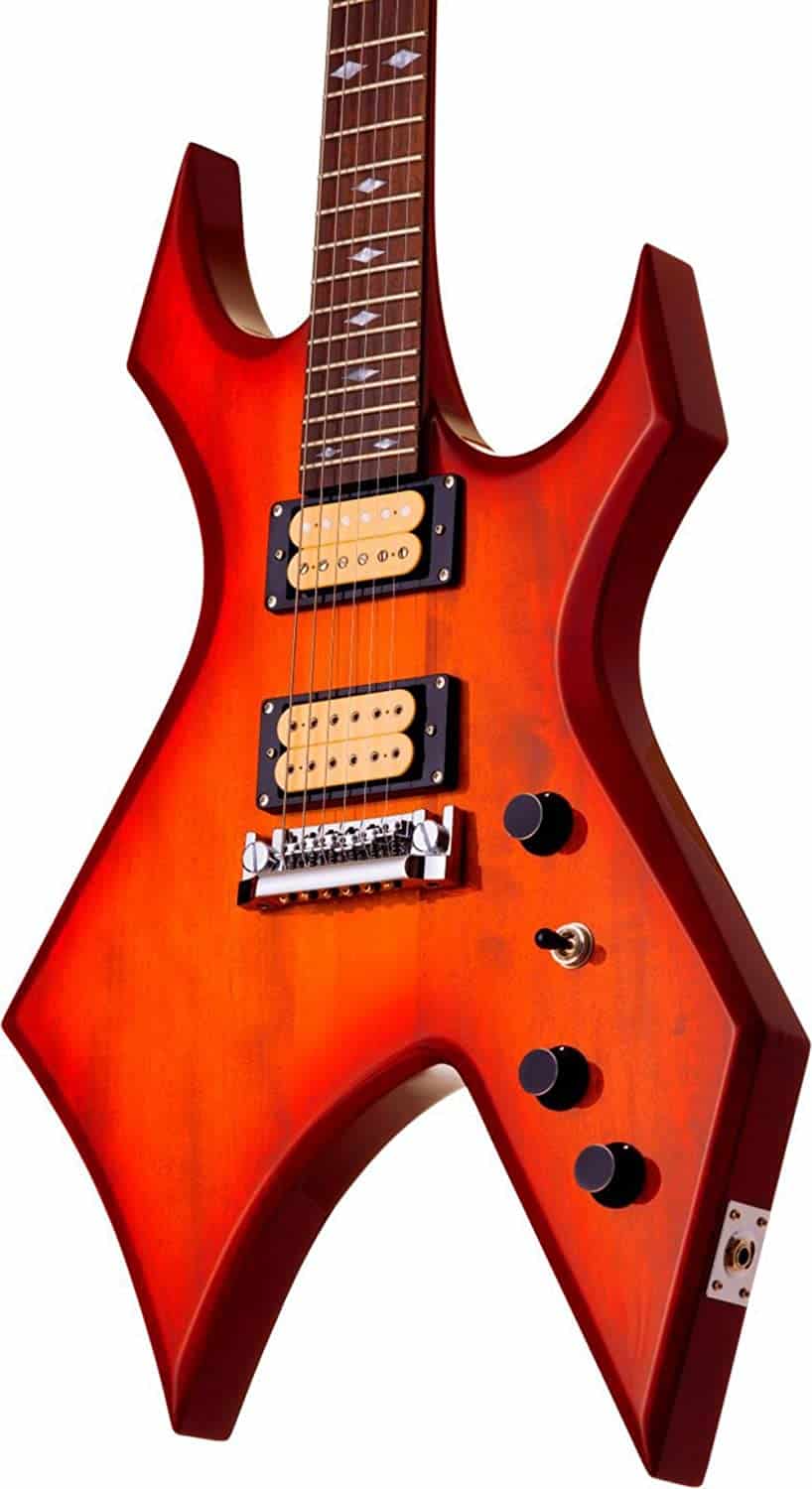 Switching to single coil mode, and the tones aren’t bad, but it sounds a bit cheap. I’m not even sure why I’m in this sonic ballpark.

Moving swiftly on to distorted sounds in humbucker mode, as predicted, this is where the Mk9 Warlock is really supposed to be played.

Obviously, the little bit of buzz from the clean channel is intensified with distortion, but regardless, with both pickups or the neck pickup selected, this is a metal riffs machine, particularly for ones based around power chords on the lower strings.

For brighter sounds for solos, the bridge humbucker isn’t bad. It’s not the creamy tone you’d get from other instruments in that position, but it’s OK.

Tapping into single coil mode, and honestly, I just couldn’t get along with it in any combination of the pickups. I found it crude and barely passable. Rolling off the volume and gain helped a little, to make it less grating, but it’s not a tone I’d ever be looking to create or hear.

This is an incredibly fun guitar to play. Being aimed at metallers who sometimes like to shred, it’s got a very low action.

The neck feels nice and smooth, but probably not as finished as other guitars. More shred-orientated guitarists might find it a challenge. There’s no binding on the fingerboard, but there’s no sharpness or catching along the frets anywhere.

The 15nlb weight might be a deterrent. It’s about 6lbs heavier than the likes of a Les Paul or Strat, which isn’t inconsiderable. It’s the sort of weight that some guitarists would find limiting, particularly in a live setting.

For intermediate guitarists looking for a fun/outrageous body shape, but with a classy finish, and that’s a step up from guitars, the Mk9 Warlock will be something that will hold a lot of appeals for them to keep picking up.

The tough thing about alternatives to a BC Rich guitar is that in terms of body shape, there really isn’t a single comparative competitor. In light of this, we’ll consider alternatives in terms of unique shapes, with similar tonewoods and pickup configurations.

Probably the closest alternative to the Warlock, is BC Rich’s Mk9 Mockingbird. However, despite being in the same range as the Warlock, it’s a whole other thing. Rather than a single slab of mahogany, the Mockingbird-flavored Mk9 comes with figured tops, with an option of Maple Burl, or Walnut Burl, either of which is reminiscent of a $4,000 coffee table, in the best way possible.

Other differences include the Tune-O-Matic bridge and cloud inlays on the fingerboard. As with the Warlock, this comes with the option to upgrade to DiMarzio PAF pickups.

Another stalwart of pointy guitars, Dean, has been producing their Razorback models since 2004. Designed by Dimebag Darrell, but released after his death, the Razorback currently has an obscene amount of variations in the range.

This Cemetery Gates model comes with fancy graphics, underneath which lies a mahogany body. It has Dimebag’s signature Seymour Duncan Dimebucker at the bridge, and one of Dean’s Dimebag signature DimeTime pickups at the neck.

The Jackson X-series Warrior XRXMG looks like it’s collecting all the world’s points onto one instrument. It comes with a basswood body, which isn’t a particularly dense tonewood anyway, but factor in liberal use of a saw to get that shape, and you’ve got a guitar that weighs next to nothing.

This Warrior has neck-through construction, and the truss rod is supported by graphite rods to lend even more support to extreme playing. It comes equipped with EMG pickups and black Floyd Rose. The rest of the hardware is also black. It’s pretty metal that way.

The Mk9 Warlock strikes a pretty special chord, as being an incredibly fun guitar to play, but which also oozes class with it aesthetics. What a winning combination! I would, however, urge players to get the DiMarzio PAF upgrade pickups if they can afford the extra dollars.

For the intermediate metal player who knows they need something with a little more “oomph,” this is very worthy of their consideration.