Ibanez was founded in 1957 by Hoshino Gakki in Nagoya, Japan—although its origins reach all the way back to 1908 when the Hoshino Gakki Company was the instrument branch of a bookstore by the name of Hoshino Shoten. The Ibanez name first appeared in 1929, but the company’s unique style as we know it today didn’t take form until 1957.

During the ‘60s, Ibanez went through a rough patch of unfortunate lawsuits for essentially copying the designs of other major guitar brands, such as Fender and Gibson. Eventually, the law suits were settled, and Ibanez began producing original guitars that did not resemble any other guitar manufacturer, such as the Roadster and Iceman.

During the early 1990s, Ibanez released the JEM and Universe models, thanks to a friendly collaboration with guitarist Steve Vai. Soon thereafter, the RG series was released as a cheaper alternative to the JEM. Today, Ibanez is known for selling signature models from many highly-skilled guitar players from all around the globe, such as Joe Satriani, Herman Li, Pual Stanley, and Tosin Abasi.

In 1997, Ibanez decided to begin contributing seriously to the budget guitar industry with its release of the GIO series (which replaced its predecessor, the Cimar). Today there are 10 guitars in the GIO line, which are all available for reasonable prices.

Most of the guitars in the GIO line are similar in a lot of ways, but the GRX70QA sticks out as being a particularly versatile instrument—as well as very aesthetically pleasing. 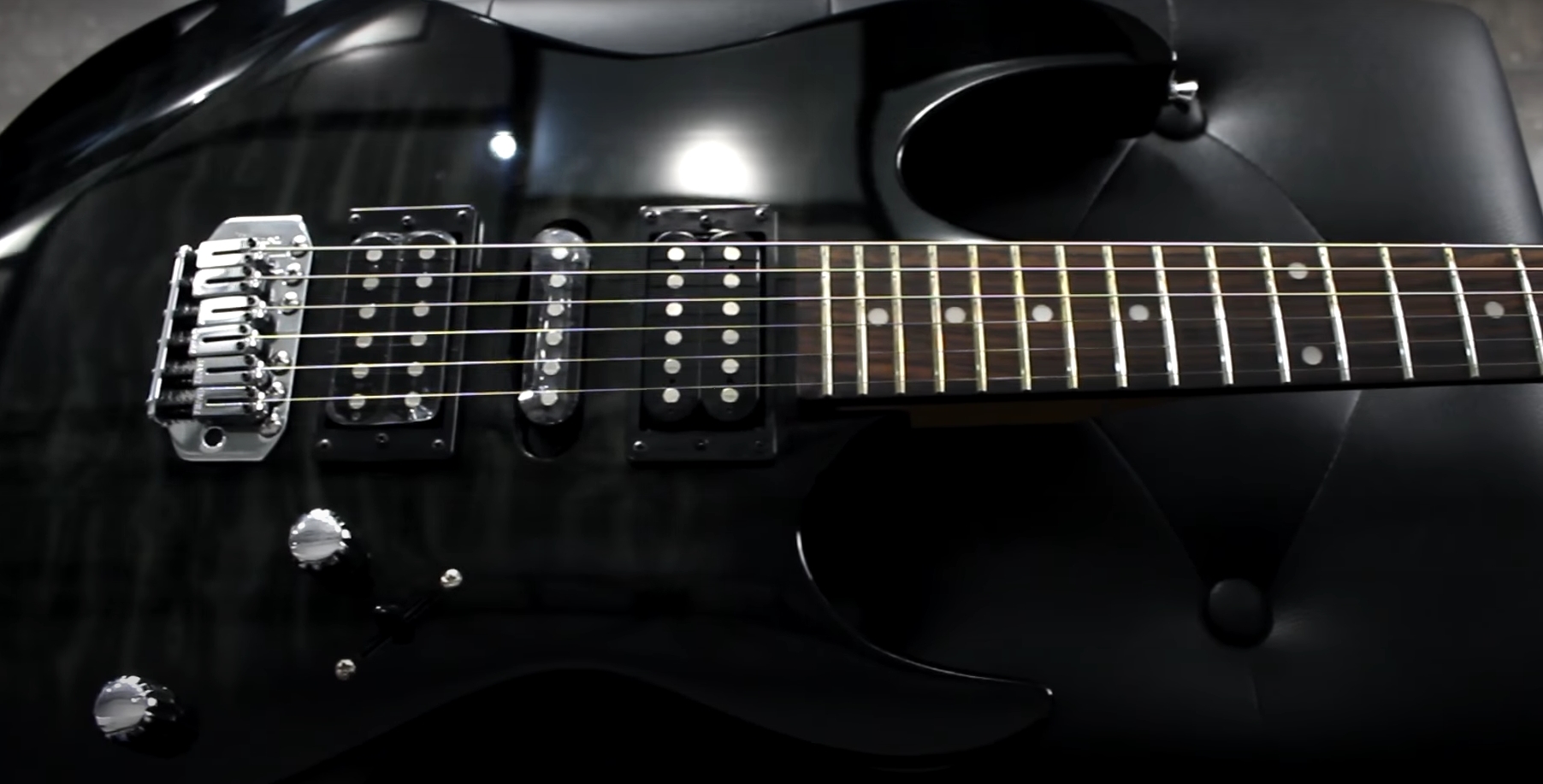 Read on to learn more about the Ibanez GRX70QA 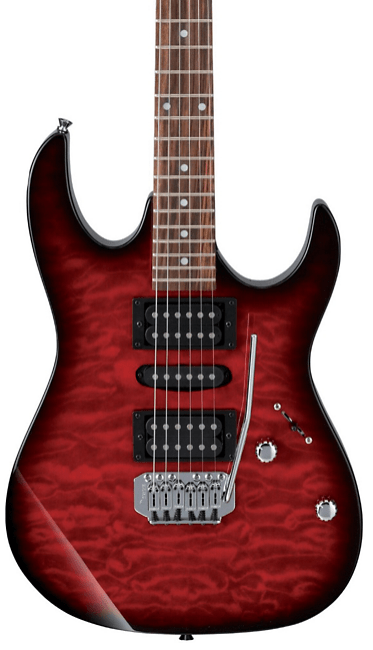 The GRX70QA—which we’ll just call the GRX from now on, for brevity’s sake—is constructed out of a poplar body with a top of quilted maple. Poplar is a pretty cheap tonewood, known for being similar to alder but with a bump in the midrange response. Sometimes poplar has a bit of a harsher edge than alder, but it really depends on the quality of the wood.

Overall, poplar is similar to basswood in the sense that it’s quite soft and susceptible to dents and dings. The body’s quilted maple top is gorgeous, with a shimmery texture that looks great on stage, and it comes in black, red, green, and blue transparent sunburst finishes.

The clear finish, though, is a bit dull and could be improved; the sunburst doesn’t look as vibrant in person as it does in the photos online. The guitar’s scale length is 25.5”, which is typical of nearly all Fender guitars and the instruments of many other major guitar manufacturers.

The GRX neck is made of maple and has a rosewood fretboard with pearl dot inlays. Maple and rosewood necks are very common due to their great tone response. The neck contributes some warmth and nice overtones to the guitar’s overall tone and adds some presence to the midrange—although this may not really be necessary due to the bump that’s already in the mids from the poplar body.

The neck is thin and smooth and has medium-sized frets, and it’s overall very comfortable and fast to play. The stock action does tend to be a bit low, with common complaints about fret buzz.

The stock pickups are probably the most interesting part of the GRX, other than its flashy appearance. The pickups come in an HSH arrangement and are all Powersound pickups, which have passive ceramic ferrite magnets. (Note that the GIO line previously used Infinity pickups, but they quit using them in 2015.)

These magnets provide a raw, punchy sound, as compared to the clear, bell-like tone that may come from other pickups, such as Alnico 5’s. From neck to bridge, the pickups used are the PSND1, PSND-S, and PSND2. 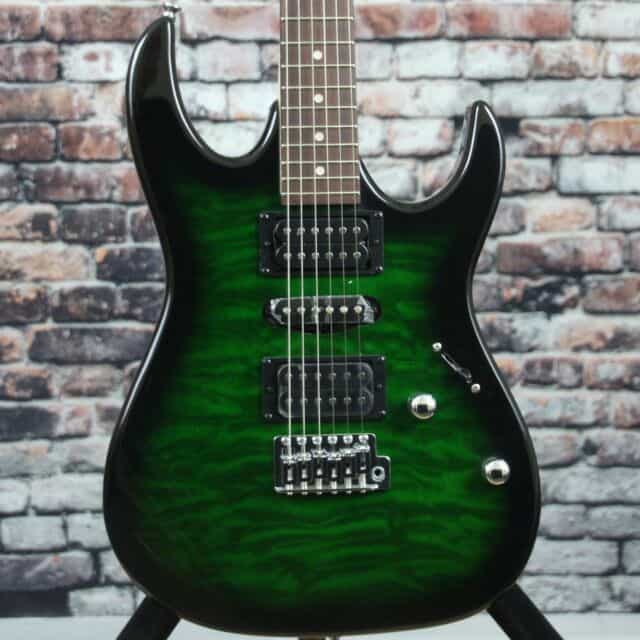 The hardware on the GRX is good quality for the price. The tuners are non-locking and do detune pretty quickly, which is unfortunate. Other than that, the Fat-6 tremolo bridge is fine, although it feels a tad bit on the cheap side. Heavy tremolo usage will cause extra detuning, but normal usage should be fine.

The individually adjustable bridge saddles are a nice touch, and the 5-way pickup selector switch feels quite solid and, as described above, splits the humbuckers in positions 2 and 4. Control wise, the GRX comes with the very basics, just a volume knob and a tone knob. Both seem to work fine, just as volume and tone knobs should.

The Ibanez GRX has pretty decent sound, although it certainly cannot compete with guitars in even a slightly higher price bracket. While the neck feels good in the hand and the body’s quilted maple top looks pretty nice, the pickups noticeably lack some character.

The Powersounds do (appropriately) have some power behind them, especially with the inclusion of double humbuckers, but the single coil is lacking and sounds tinny and thin. All of the pickups lack some harmonic response and sound a bit bland, although they are dynamically responsive and loud.

That said, these pickups are suitable for a guitar and are one of the primary factors that brings the price to such a low point.

After all, even fantastic pickups will sound bad through a low-end amp, which most beginners will have. Thus, using cheap pickups for a newbie guitar player is passable.

The fact that the body is made of poplar would not be a huge problem in and of itself, but when paired with the cheap pickups, the body’s midrange spike becomes extra noticeable and provides a large contrast to the lows and highs, which are both lacking character.

The GRX is a versatile guitar and can be played well across a variety of different genres, from rock to pop, jazz to country, although the pickup arrangement and slim neck profile suggest that it’s optimized for metal and hard rock.

The neck is quite fast and works well for speedy soloing and the humbuckers are responsive enough to pick up on the finer details, even if the tone it delivers isn’t the greatest.

Ibanez did some good things with this guitar, by including an HSH humbucker setup, a tremolo bar, and a nice, quick neck, not to mention a sleek body shape with an attractive maple top. Most of the hardware (with the exception of the tuners) seems reliable, and the body shape is nice and comfortable.

However, there are a few negatives in the design that are too major to overlook.

The pickups are probably the biggest issue—being quite cheap Powersound ceramics—and produce a tone that is quite thin and harmonically uninteresting. The midrange has too much of a strong boost thanks to both the poplar body tonewood and the pickups’ ceramic magnets.

Correspondingly, the lows lack balance, and the highs are thin and bland. That said, the pickups are not such an enormous problem when it is considered that the GRX (and the whole GIO line, for that matter) is intended for new guitar players.

While Ibanez certainly makes some incredible high-quality instruments that are suitable for gigging pros, the GRX70QA is not one of them, coming in at just around $200.

If you’re a looking to learn how to play guitar and have an inclination toward metal and rock, this guitar will be suitable for you—although there are other guitars on the market for a similar price that may better fit your needs, such as the Yamaha PAC112V or the ESP LTD M100FM.

If you’re not a and are looking for a follow-up guitar after your own -level instrument, this is probably not for you. Spend a little extra money for something that will be of higher quality and deliver better tone.

Worth the price ? Yes mine is the left handed version, exactly like the one in the photo. (Blue) It was $249. Due to the lefty version. I am working on adding some upgrades to take this guitar to the next level. But as is from the factory its worth every nickel. Locking tuners are on my list (under $70) and a tusq xl nut ($12) to replace the plastic unit. Ive had this guitar for 4 months and i think its great. And can be a little better with some rather low budget upgrades.

I got a trem socket damage model otherwise like new at $125 delivered. It is easily a $125 value, since I blocked the tremolo steel block anyway, so no trem use. A cutting die might replace the damaged threads if you want it. To me, it is versatile, needs the nut slots deepened by a skilled person and pickup height/angle touched a bit to make it sound and play best. Tuners are not bad, but nothing special and need the knobs snugged up and lubrication where the knobs turn on the shafts. But it is well-made and neat and I shimmed the rear of the neck pocket with 1 business card of cardboard to make the action drop 1/32" inch to perfect (2/32" at fret 12 gap). Frets were clean and the board (rosewood) can use a wipe of fretboard oil. 1-piece maple neck is nice and I replaced the strap button washers with better felt ones. For $125 delivered... if you can do basic setup work and have the tools (I do), this is a very good value: light, plays fast, sounds pretty good into a Princeton Reverb, and can always be sold off to get most all my money easily. With a used set of pickups (even 2 good Artec humbuckers), this is NOT a shabby guitar. Cheap and basic, but a quality guitar for VERY cheap ca$h. Don't sneer and walk away... some guys can do a lot with a cheap H S H fairly good guitar.