The world of strings instruments is infinite, and you might have heard of the basics: ukuleles, guitars, bass, hello, etc. But what about resonator guitar players?

A resonator guitar is a type of guitar that is the same size and shape of a standard acoustic guitar, except it has a metal speaker built into it. The bridge of stringed instruments looks a lot like the bridge on a banjo and serves its purpose by carrying vibrations from the strings to the metal cones for different guitar sounds.

The metal cones on the guitar amplify the sound that strings carry. Thus it produces a larger overall volume than you would typically achieve from an acoustic guitar that isn’t amplified. The most significant problem that a lot of people face with acoustic and electric resonator guitars is figuring out how to correctly choose the best resonator guitar for their budgets, gigs, and personal preferences.

The basics of resonator guitars 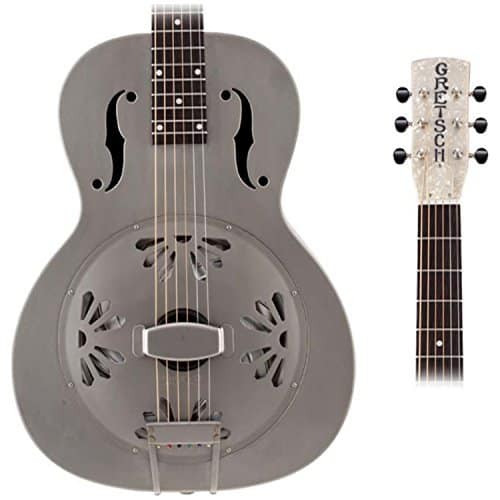 Square neck vs. round neck

While this doesn’t mean that you have to limit yourself to the genres that you can play with a square neck, a square neck resonator is most commonly used in a country, bluegrass, and Hawaiian music. Square necks are handled by being held in the lap with the fretboard facing upwards and is played like a lap steel guitar with a bar or a slide. You can’t play a square neck in the way you play a traditional acoustic guitar, in the over the knee style.

The build of a square neck resonator presents with a neck that is wide, chunky, and has square edges which makes it uncomfortable to hold and play, but great for playing when resting on your lap. The nut on a square neck is placed much higher than on a regular guitar, which also makes standard fretting impossible; the frets that are on the fretboard on the instrument are just used as a guide for your placement and aren’t used to make any sound.

A round neck resonator is the most common resonator on the market to complement your acoustic tone, as it is a guitar that has a curved ‘C’ shaped neck and is fretted like a standard guitar.

Round neck guitars aren’t very different than a regular acoustic guitar, as you can play them with a slide, strumming, with fingerstyle, or with flat picking; the versatility that the round neck guitars offer to musicians is why round necks are more commonly used in music than square necks.

Biscuit vs. Tricone vs. Spider

After you’ve figured out which type of neck you’re looking to choose for your resonator, you’re then going to have to figure out what type of resonator style you want on your instrument. There are three different types of resonator styles on the market today, and those styles are biscuit, tritone, and spider.

The resonators all have their unique tones; these tones will all mix and produce even more unique sounding tones when mixed with the body wood, the manufacturer, and the overall quality of the resonator.

The biscuit bridge resonator is the simplest design on the market today and uses a single sizeable cone that is upward facing, with a wooden disc located at the peak. The wooden disc (which is also called the biscuit) provides users with a core resonator tone. The biscuit resonator allows users to experience purer tones in comparison to the tricone and the spider resonator, but still has a gritty bite to it.

The spider cone bridge resonator is comprised of a single cone that is downward facing, and it sits on the guitar. Attached to the cone is an eight-legged aluminum framed bridge with a saddle placed on top. Spider resonators provide musicians great sustain and a more of a nasal tone.

The tritone bridge resonator is the oldest resonator and is composed of three small aluminum cones that are all connected by a T-shaped bridge that’s made from aluminum. Tritone resonators are the most popular on the market, because of the high-quality projection, beautiful tons, and long lasting sustains. However, since three cones go into the creation of this guitar, it takes a long time to produce a tricone resonator, which increases the cost of the instrument.

Unlike acoustic guitars, the materials that the body of the resonator doesn’t play a large role in the tone quality the instrument produces, as 95% of the sound that is produced comes from the resonator cone. The style of the body that you choose will all depend upon your tonal preferences; a wooden body is going to provide you with a fuller, warmer tone, whereas a metal body will provide users with a brittle and metallic sound with a larger sound projection.

While the type of wood that is used to build an acoustic guitar matters, the bodies on most resonators will use laminate woods, even the most expensive models on the market. Laminate woods are more sturdy than non-laminate woods- the sturdier a body on a guitar is, the larger the sound projection is. The main reason why manufacturers only use real wood in the composition of resonators is simply for aesthetical purposes. 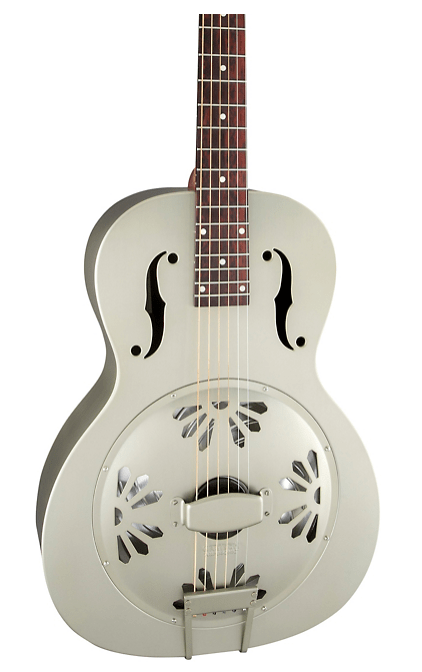 The Gretsch G9201 Honeydipper Metal Resonator marks the return of resonators to the Gretsch family.

When I first picked up the Gretsch Honey Dipper and played with it, I immediately noticed that there was a significant difference in the sound that the Honey Dipper produced in comparison to the other resonators I had played with. The Honey Dipper uses a metal body resonator, which emphasized a heavy metallic sound to the resonator’s tone.

As for the composition for the rest of the instrument, the body of the Honey Dipper is comprised of nickel plated brass, a metal resonator, and a rosewood fingerboard. The Gretsch Honey Dipper sports a round neck, which will allow you to play your resonator in the same position that you would an acoustic guitar. However, because the bridge of a resonator is so different than acoustic guitar, you’re supposed to play this instrument with a slide. 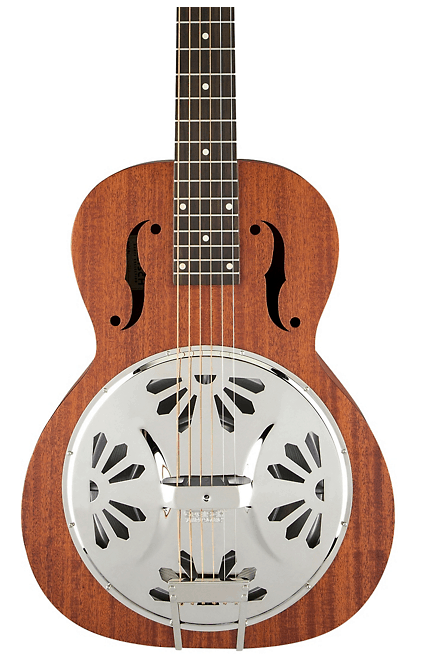 The Gretsch G9210 Boxcar Resonator marks the return of resonators to the Gretsch family. It has the square neck that's preferable for bluegrass.

When you’re looking into a guitar that’s extremely specific to one niche, things can start to get very expensive very quickly. However, the Gretsch G9210 Boxcar does a fantastic job of combining affordability, playability, and great sound quality in this resonator. The G9210 Boxcar is great for both beginning and experienced lap-steel musicians and produces great sound, no matter what your experience level is.

The G9210 body is comprised of laminated mahogany, a mahogany neck, a spider bridge, and an aluminum resonator. This resonator produces an outstanding sound when considering the price tag that comes with the instrument, sufficient sustain, and great warmth. 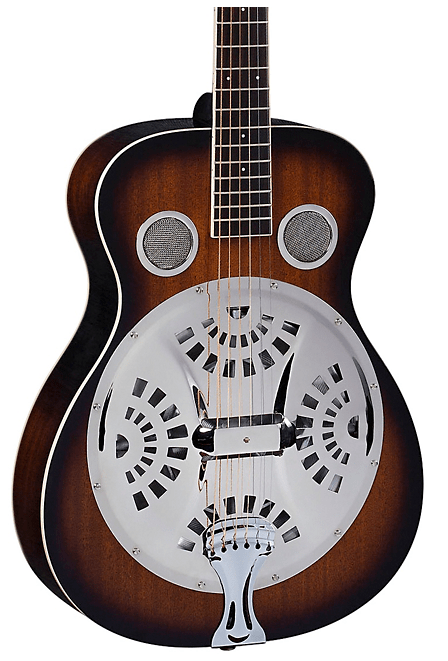 The Regal Studio RD-30MS Square neck is another great choice for both new and experienced resonator musicians but also serves a great piece to show off. The Regal RD-30MS highlighters amazing craftsmanship, high-quality hardware, and outstanding sound. This instrument sports a traditional non-cutaway body and is comprised of laminated mahogany, a mahogany neck, a spun metal cone, maple saddle, a spider bridge, and a high bone nut. Combining all of this and you’re receiving a well-balanced sound for an affordable price. 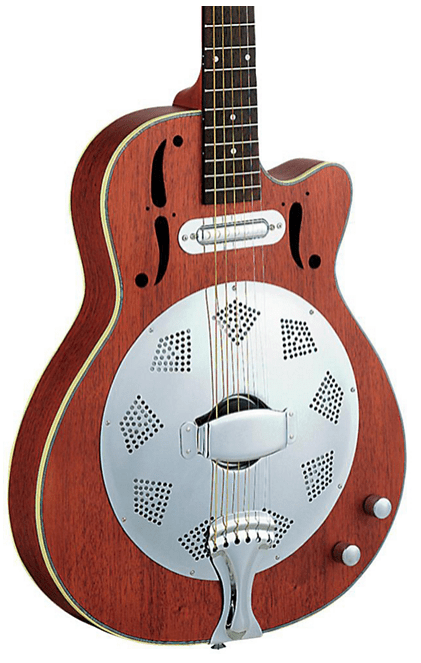 If you’re interested in getting your hands on an acoustic-electric resonator without spending too big of a price tag, the Dean CE Acoustic-Electric is an affordable option for you to consider. The Dean CE was created to act as a hybrid instrument and does provide the tonal quality that a typical resonator offers and is excellent to use if you’re looking for convenience. If you’re looking to play gigs with a resonator, it’s much easier to plug your instrument in than rather sit your resonator in front of a microphone.

The entirety of this resonator is comprised of mahogany, including the neck. As for the electronics department of this resonator, there is a single-coil pickup which puts out a moderate output with a warm response. This instrument does provide users with tone control and volume control, which helps to expand the versatility of this resonator when it’s plugged in. The Dean CE comes installed with bronze strings, which don’t pair very well with magnetic pickups; if you’re looking to spend a lot of time plugging in, I would recommend switching over to nickel strings. 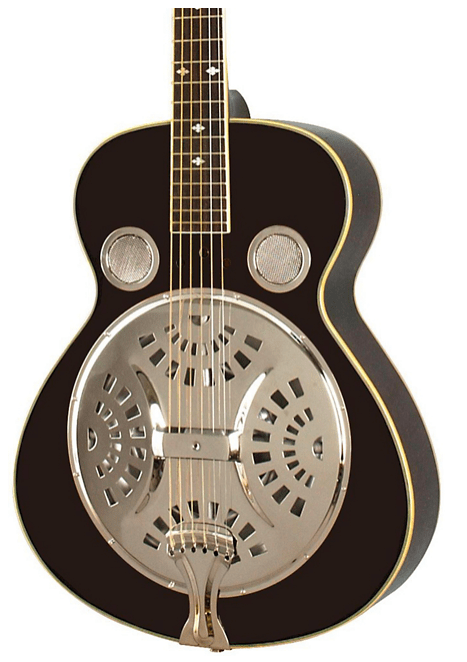 The die-cast spider bridge and 10-1/2" spun aluminum resonator cone give it exceptional projection and volume.

What makes this resonator unique is that it is available in both square neck and round neck configurations. The Rogue Classic Spider is known as a budget resonator that acts as a great entry-level instrument. The Spider round neck resonator has a sleek black finish with a cream binding, the sides and back are comprised from laminated mahogany, laminated spruce top, mahogany neck, rosewood fretboard, spider bridge, and a 10.5” aluminum resonator cone. 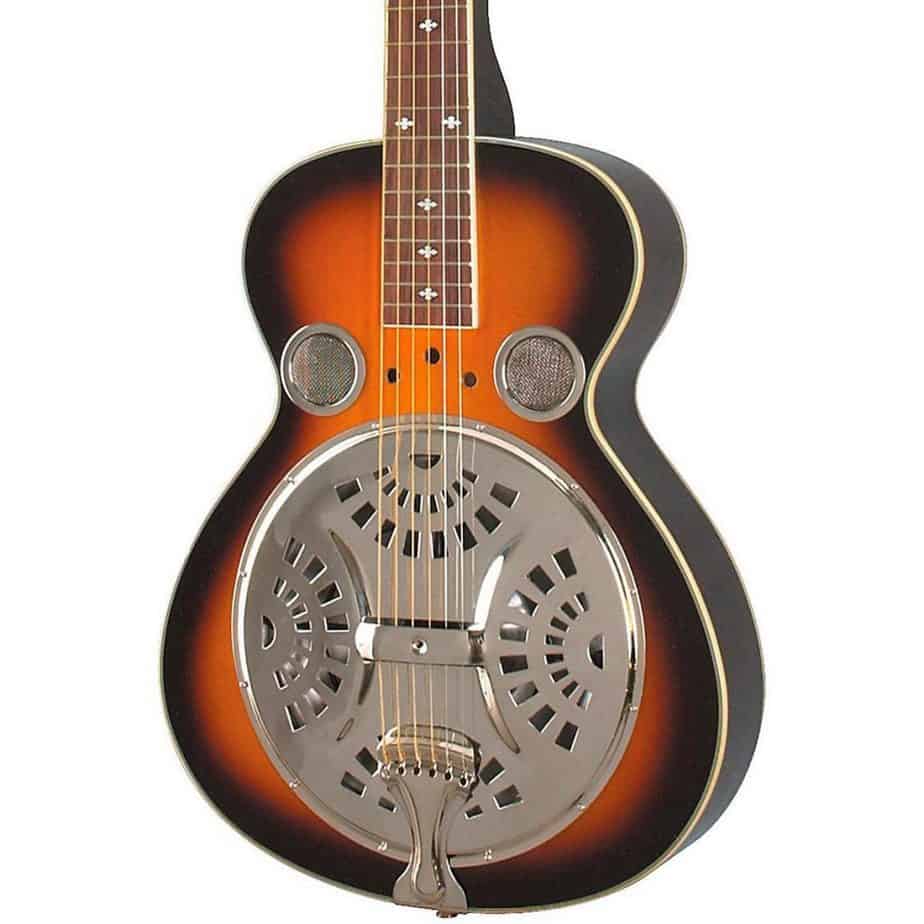 At the end of this article, you’re also probably wondering whether you should be buying a used resonator. If you are willing to buy a used guitar, be aware that some risks can come with your purchase. However, there is also a possibility for high reward.

When buying a used guitar, you can’t know all of the trauma that your instrument has been through. If parts are replaced if there’s anything wrong with the resonator ‘under the hood’ etc. Just like with an electric guitar. If you do decide that you’d like to purchase a used guitar, make sure that you go to a store or an online shop that has a good standing in the music community.

If you’re new to the world of resonators, the instrument can be seen as incredibly complicated, especially when you compare resonators to a classical guitar, acoustic guitars, or even electric. Once you understand the basics of a resonator guitar, everything becomes a lot easier.

When you’re looking to purchase yourself a resonator, make sure to take extra care to listen to any rattling noises. Any rattling noises are a sign that there is a problem with the cone, which can affect the feel and sound of your resonator. Have fun looking for your new resonator!

Yes, they are loud and are completely different than acoustic guitars, so you might not like the way they sound.

Is a Dobro the same as a resonator guitar?

Dobro is a brand of resonator guitars that have a wooden body and a square neck, with the front being pointed upwards while playing.

Where can you buy resonator guitars?

Resonator guitars can be bought in guitar stores, although, there are less likely to be a lot of different brands there, but you can always search for your favorites and order them online through Amazon.

Article was for "the best" resonators, yet does not include Nationals?