Vance Joy released the song “Riptide” in 2013 as one of the songs of his debut EP, God Loves You When You’re Dancing, and it was also a part of his debut album, Dream Your Life Away, which was released the following year.

Despite having other recognizable songs, “Riptide” is without a doubt his most successful one yet. It was written by him, and the track was co-produced by Edwin White.

Since its release, it has entered several charts. It reached 6th place on the ARIA singles chart, was named number one song by the Triple J’s radio station, number one on Billboard’s Alternative Songs, number ten in the United Kingdom, among other notable international achievements.

This song has more than 6 million sales and counting, since it is still a popular tune, even after almost ten years.

To play this song, you only need to know 3 chord shapes that most people learn early on, which are A minor, G Major and C Major. If you want to play along to the original recording, or sing it in the same key as Vance, you should place a capo on the first fret of your guitar. You can still play it without one, the only difference is that everything will be one semitone lower.

This guide will teach you how to play this amazing song by Vance Joy on the guitar. There are chord diagrams, tabs, a breakdown of the chord progression and general tips to help you perform better on this song and others that you already know.

You don’t have to worry much about the time signature on “Riptide“. It was written in 4/4, also known as “common time”, since it is arguably the most used time signature in general.

Harmony – What are the Chords in Riptide by Vance Joy? 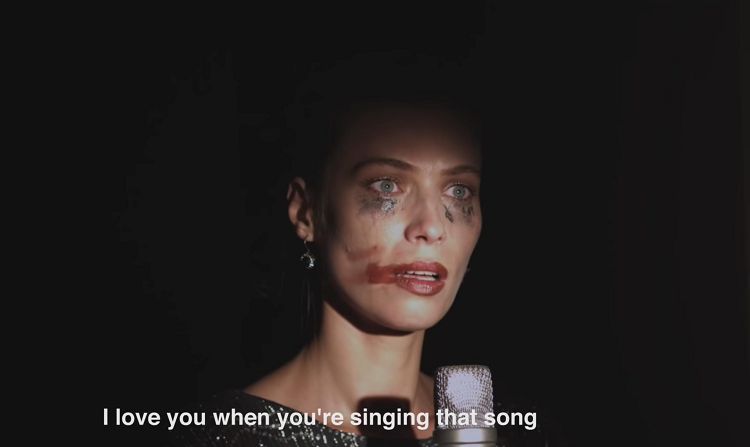 Vance Joy wrote “Riptide” in the key of C# Major. Since he is playing the chords A minor, G Major and C Major with a capo on the first fret, that means that he is actually playing A# minor, G# Major and C# Major. There is a small section in which the F# Major chord comes up, but if you use the capo, it looks like a regular F chord.

To recap, you need to know the following chord shapes:

Remember, if you play these without a capo, you won’t be able to play along to the original recording by Vance Joy.

Also, if you do use a capo and you are playing with a keyboardist, you have to explicitly say “A# minor”, “G# Major” and so on, because even though you’re playing the same shapes, the chords themselves are not the same.

Check out the chord diagrams below if you need to clarify any of the chord shapes that you will need to play this song.

You probably already know how to play all of these chords, but if not, they are not tricky to learn, except for F Major in case you aren’t used to playing barre chords yet.

You can strum comfortably and freely throughout the whole chord progression, but pay attention to A minor and C Major, as you should not let the 6th string ring. Mute it with your left hand thumb.

When you are learning a song, knowing the chord progression by heart is only half of the job. You need to be able to play on time, know how long each chord lasts, and use a suitable strumming pattern or picking technique.

You can use a pick and strum in a certain pattern, or you could go with a fingerstyle technique for a different sound that you can’t get with a pick.

This section focuses on the two strumming patterns that you can hear throughout “Riptide” by Vance Joy, so you can learn how to play along properly. You can also use these as inspiration to create a different pattern to use on this song and others too.

If you listen to Vance Joy’s original recording of “Riptide”, you will hear this strumming pattern during most of the song. He plays it during the intro, verse, and pre-chorus sections.

The trick to playing this pattern in a fluid, musical way is to keep your strumming hand moving up and down on every downbeat and upbeat, in an 8th note pattern. However, you don’t strum every time – instead, you hit the strings when you’re supposed to, and pass right above them when you don’t want to hit them.

Check below for a tab that illustrates this pattern. This tab indicates that you should place a capo on the first fret of the guitar, but the strumming pattern is the same regardless.

You can also represent this pattern with “D D UDU”. “D” means “down” and “U” means “up”, as in the direction in which your strumming hand is going.

If you strum the strings every time, the pattern would be “DU DU DU DU”. Comparing this one to Riptide’s strumming pattern will help you understand what is going on.

If you are having trouble getting the hang of the technique, try to slow it down and build up your speed a little at a time. You can do this with a metronome set to a low bpm, or even with the song itself (YouTube allows you to slow down videos).

This strumming pattern is used in every chorus section of the song. It is a very common pattern that you have probably already played in other songs before.

Check out the tab below to understand it better.

Using the same logic as before, this pattern can also be represented by “D DU UDU”.

Once again, you can compare this pattern to the one that consists of strumming the strings on every 8th note to understand it better.

This section is meant to look into the chord progression of “Riptide” more in-depth, and see what is the function of each chord.

This kind of exercise is amazingly useful for any song, since you will have a bigger understanding of what is going on, and it will make it easier for you to transpose it, improvise over it, and come up with similar ideas in your own compositions.

The first step is to establish the key of the song. In this case, “Riptide” is in the key of C# Major, which means we need to take a look at the C# Major scale first.

The C# Major scale has the following notes in it:

The chords in the song “Riptide” by Vance Joy are A# minor, G# Major, C# Major and F# Major. If we look at the C# Major scale, it tells us that the chord progression of this song is a “VI, V, I” progression, since most of it is a loop of A#m, G# and C#.

“Tonic”, “subdominant” and “dominant” are terms that refer to the harmonic function that each chord has in the key center it is in.

In a general way, tonic chords convey a feeling of “home” and foundation, subdominant chords tend to feel like they are moving away from the tonic, and lastly, dominant chords sound unstable and create tension in music that is often resolved by moving to a tonic chord.

This system is very useful to understand and memorize what is going on in every song, as long as you can identify what is the chord degree of each chord. It is also great to transpose a song to a different key. Instead of having to calculate what the new chords will be, you can just move the progression up and down the guitar neck without thinking too much about it.

For instance, if you were at a gig or jam session and needed to teach “Riptide” quickly to another musician, you could just say that it is a “VI, V, I” progression in the key of C# Major.

Question: What is the Key of the Song “Riptide” by Vance Joy?

Answer: Vance Joy originally wrote the song “Riptide” in the key of C# Major. However, since he uses a capo on the first fret of his guitar, some people just prefer to think of the progression as being in the key of C Major. This can make it easier to understand and communicate it to another guitarist if he is also playing with a capo on his guitar.

Question: What is the Time Signature of the Song “Riptide” by Vance Joy?

Answer: “Riptide” by Vance Joy was written in 4/4 time. In this time signature, each bar is comprised of 4 beats, each of them represented by one quarter note.

This time signature can also be referred to as “common time”, and can also be represented by a “C” with a horizontal line going through it in sheet music.

It is the most common time signature, so it should be easy for you to count along to any song that uses it.

Question: What are the Chords in “Riptide” by Vance Joy?

Answer: There is a total of 4 chords in the entire song “Riptide” by Vance Joy. However, 3 of them make up more than 90% of the song.

You should know how to play A minor, G Major, C Major and F Major. The latter is the one that only appears a couple of times throughout the whole song.

Also, remember that to be exact, you should say that the chords of this song are actually A# minor, G# Major and C# Major, but since Vance plays it with a capo on the first fret, many people just omit the sharps to make it simpler.

Just make sure you know them properly in case you have to tell them to a musician who is not playing the guitar.

Question: Is it Necessary to Have a Capo to Play “Riptide” by Vance Joy?

Answer: Vance Joy plays his song “Riptide” with a capo on the 1st fret of his guitar. This transposes the song from C Major up a semitone to C# Major.

The chords are still playable in that key without a capo, but you will not be able to use the open chord shapes that suit this song better.

This is only relevant if you want to play it in the same key as Vance Joy, since you could just play the same shapes without a capo, which would be one semitone lower than the original recording.

If you are looking for a song that is popular, recognizable, and doesn’t have a complex chord progression, then “Riptide” by Vance Joy should be the next one that you add to your repertoire.

Using mostly 3 chords that most guitarists learn how to play while they are beginners, a simple strumming pattern and a song structure that is not hard to memorize, you should be able to master this song fairly quickly.

Try to understand a little more about the chord progression of this song using the brief analysis in this guide, as it will give you tools that you will be able to use in countless other songs, as well as your own compositions. 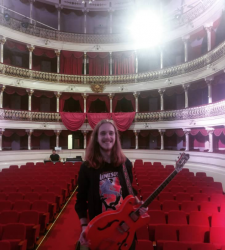 Gustavo Pereira
Euphonious Touring Guitarist at Guitar Space
Gustavo isn’t like other guitar players; instead of paying for lessons from a guitar teacher, he traveled around the world to watch the greats. Along the way, he’s met some really amazing people that have shared some invaluable lessons that he hopes to share with anyone looking to learn the guitar. He doesn’t believe in all of the fancy talk that comes with learning the guitar; he wants to break down the basics so that no matter what type of musical experience you have, you’ll understand too.