When listening to John Mayer it’s easy to be overwhelmed by all of the things he’s good at: I mean he can sing, he can write amazing songs and, to quote Eric Clapton, he’s also a “master guitarist” on top of all that.

As a matter of fact if you’re reading this article there’s a very high chance that you know who John Mayer is and you might be a fan of him already, but even if you don’t particularly like his music, you have to admit that his talent is undeniable, especially when it comes to Blues Guitar Playing.

By 2004 John Mayer had already released two successful Grammy Award winning albums (“Room for Squares” in 2001 and “Heavier Things” in 2003), but the general public hadn’t yet had a chance to witness his abilities on the electric guitar, because his first two albums were more in the “singer-songwriter” genre and there wasn’t a lot of space for his Blues influences to breathe in his music at the time.

So, when it was announced that John Mayer would be performing at the 2004 “Crossroads Guitar Festival” among some of the most influential Blues Guitarists of all time, more than a few people didn’t really know what to expect from the guy that wrote “Your Body is a Wonderland” in the context of a strictly Blues Guitar oriented event.

That’s probably why he decided to start his set with an almost 4 minute long epic guitar solo performance as an intro to the song “City Love”, from his debut album “Room for Squares”.

Keep reading if you’re interested in learning more about this, because I’ve transcribed and analyzed this entire performance and I’d love to share what I learned.

Repeating musical phrases is essential when playing guitar solos, because, when done right, it can provide the listener with a sense of familiarity, and it can generally make “on the spot” improvisational moments more enjoyable to listen to.

Of course John Mayer knows how to do that very well, listen to what he’s playing from 0:30 to around 0:47.

Here’s the main lick he is playing in this section:

This lick revolves around the D Minor Pentatonic Scale (D – F – G – A – C), but there’s a couple extra notes that John uses to “spice things up” a little.

He also plays the Major 6th (note B in the Key of D) just before the fast 16th note triplet towards the end of the lick, and that note choice proves his admiration for BB King and other old-school Blues players, who were very heavy users of the Major 6th in the context of the Blues.

Whenever he plays the Major 3rd (F#) he’s also playing the Minor 7th (C) together with it as a small two-note chord, which gives us all the information we need to understand that this lick is meant to be played over a D7 chord (D – F# – A – C) throughout its entire length.

The last part of the lick consists of a Dm6 chord (which he plays by adding the Major 6th, or the B note, to a D minor triad) followed by a descending D minor arpeggio.

This is played using Sweep Picking, which means you should play the one-note-per-string D minor arpeggio using only upstrokes.

Although it’s undeniable that studying John Mayer licks can be quite challenging when it comes to technique, I have to say that you shouldn’t be obsessing too much about the technical facilities required to play this kind of phrases, it’s more about the groove than it is about precision…

I mean, if you slow down the video you can clearly hear that John Mayer himself is not 100% precise every time he plays this arpeggio…because that’s not the main focus in this style of playing.

So don’t worry if this doesn’t come out very clean sounding at first, as long as you keep the groove moving forward you should be good to go!

Practice this lick to a metronome at first, and try repeating it over and over again without stopping, then play along with the video (you can slow it down on YouTube if you want to, but then gradually bring the playback speed up) and try to make it sound as close as you can to the way John Mayer plays it, not with the ultimate goal of copying him, of course.

Once you can play along with the video you can start varying this lick, which is something you hear John do all over this performance, and before you even notice you’ll be able to play it in your own improvised solos!

If you have at least a little bit of familiarity with John Mayer’s music you have probably noticed that some of his guitar riffs rely heavily on the use of polyphonic elements, just like chords, or (even better) smaller chunks of them.

Songs like “Slow Dancing in a Burning Room” and “Belief” use two note chords made with 6th intervals (the two notes are a major or minor 6th apart, ex: G# and E) in their main riffs, while other riffs like the one in “Vultures” rely on closer intervals, like 3rds, 4ths or 5ths.

This technique can also be very effective during solos because when playing a melody with two or more notes together you are basically harmonizing yourself, therefore you have the chance of adding harmonic interest to your melodies…on the spot!

John Mayer gives a perfect demonstration of this concept from 01:57 to 02:10 of his performance at the 2004 Crossroads Festival.

This lick is in the Key of D Minor, it uses only Major and Minor 3rd intervals to create three chords made up of two notes each, alternating between one

Be careful: this is meant to be played over a D Minor chord, nobody else in the band has to alternate between C Major and D Minor for this lick to work (potentially the Bassist, Pianist etc… could all be holding a single D Minor chord while this lick is being played).

Every time John Mayer plays a C Major chord in this lick it has the notes C and E inside it, respectively 1st and 3rd degree of the C Major Scale.

The first D Minor voicing is made up of the notes D and F (1st and 3rd degree of the D Minor Scale) while the second uses F and A, respectively

3rd and 5th degree of the D Minor Scale.

This is the bare bones. In this melody John is playing almost entirely just the root notes of the chords he’s using: C and D (with the exception of one F note, found at the 10th fret of the G String).

All of these three notes are in the D Minor Pentatonic Scale, and as you know, it’s pretty hard to play this particular scale over a D Minor Chord and sound bad as a result…you might sound predictable, but every note will be 100% functional and overall pleasant.

By choosing to play this notes he’s building a very strong and “secure” foundation for the Top Melody.

The Top Melody for this lick uses exclusively E and F notes with the exception of one A note (found at the 10th fret of the B string), but focus on the blue notes only, this is where the cool stuff is.

Every note circled in blue is an E note, and that’s not in the D Minor Pentatonic Scale (D – F – G – A – C)… E is the 2nd degree (also called 9th degree) of the D Minor Scale, and it usually works beautifully over a D Minor chord, just like it does in this particular lick.

The cool thing is that John Mayer is playing the E note as part of a small C Major chord voicing, so whenever he plays that he’s actually “imposing” a chord (C Major) over a static background made up of a different chord

He plays this lick with his fingers instead of a pick, and that is very useful for achieving good rhythmic and melodic control when playing polyphonic phrases like this one.

The advice I’m going to give you for practicing this is pretty much the same I gave you for Lick N. 1: start with a metronome set to the tempo you feel most comfortable in and then gradually increase the BPM.

You can start playing this over the John Mayer video with the goal of making this sound as close as you can to the way he plays it.

After you have done all of that and you feel confident while playing this lick you can start adding your own variations and embellishments to really make it your own lick!

Before I say goodbye let me answer some questions you might have on your mind after reading this:

Question: Does John Mayer think about all these things while performing?

Answer: Obviously I can’t tell for sure, but I don’t think so. I have never met an accomplished musician that has this kind of thoughts going on while they’re playing live, realistically you’re not going to sound good if you’re thinking about these things on stage.

Question: So, when do I think about this?

Answer: While practicing. This kind of methodical analysis is key if you want to understand why you love your favorite players, hopefully with the goal to replicate what they’re doing, but in the context of your own playing.

Question: Do I have to learn Music Theory to do this?

Answer: Surely a bit of Music Theory knowledge has never harmed nobody, but I don’t think it’s mandatory to learn it. Theory is great for communication between musicians, but if you only want to play music and you don’t feel the need to talk about it in technical terms, then the only thing you need to train is your ear. Ultimately music is meant to be played and heard rather than talked about and discussed.

Like with most things, not just guitar related, the devil is in the details.

When writing this article I wanted to point an hypothetical spotlight towards two cool musical moments in this John Mayer performance, with the goal of analyzing them in excruciating detail, because that’s how you demystify music…I mean, unless you’re listening to some alien guitarist I’m not aware of, all of your favorite players have two hands and one brain at their disposal, just like you and me!

If you’re interested in learning more of what John Mayer played in this video you can download the full transcription (with tabs and notation) here! 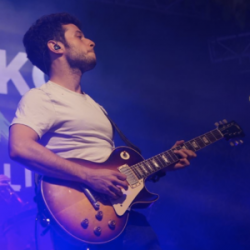 Pietro Venza
Profesional Improv Master  at Guitar Space
Pietro fell in love with the guitar at a young age and has been hooked ever since. He started gigging when he was 14 years old and hasn’t yet put his guitar down. In 2018, he was nominated for a Presidential Scholarship at Berklee College of Music, which means he was in the top 25 musicians from across the world auditioning. He also has a Bachelor’s and a Master’s Degree in Jazz & Pop Guitar Performance from Saint Louis College of Music in Rome, he was also promoted to the teacher of his fellow students there.