One of my favorite gigs was the Jimi Hendrix Big Band. It was a 20-piece orchestra with me playing the role of Jimi Hendrix. The arrangements were based on the Hiram Bullock Plays the Music of Jimi Hendrix recording from 2009.

Initially, I was asked to be one of three to four guitarists. Each of us would play and sing 2 or 3 tunes and opening night was in about 90 days. The core band members met and decided weekly rehearsals would start in two weeks, and the guitarists would choose their songs. I chose “The Wind Cries Mary” and “Foxey Lady,” The music director gave me the sheet music to my tunes. I had my marching orders, so I began to practice my songs. No big deal, right, 2 tunes and 12 weeks to prepare.

I’m the only guitarist that showed up. We went over my tunes, and I made lots of mistakes. The hard part was imagining the big band parts and counting measures where I didn’t play. There were also sections where I doubled a flute or a saxophone playing musical passages that were not written by a guitarist. No worries, 2 tunes and 10 weeks to go.

I’m still the only guitarist showing up to rehearsals. My parts are coming along, and I’m starting to feel comfortable.

Please understand that I was a hired gun and wasn’t privy to band-business meetings. And I was only given my guitar parts. I asked for the full score of my 2 tunes but was denied for fear of copyright infringement (basically, they were worried that I would post them on the internet).

Opening night was a month and a half away, and I was still the only guitarist attending rehearsals. By now, I was allowed to look at the other songs and sight-read those parts so that the rhythm section could begin to work through the remaining tunes. Sidebar: I’m a terrible sight reader.

Post 5th Rehearsal Band Meeting: Do We Cancel the Show

I was asked to join the “decision makers” of the band at their post-rehearsal business meeting. We went to a local coffee shop and huddled around a table in the corner to talk business.

They let me know that they had been talking to the other guitar players and that they had now officially dropped out. This left us with two options:

Secretly, I wanted the opportunity to do the entire show and was excited to do this gig. But I was terrified with only a little over a month to learn the other 8 songs. And my ego was having me believe that I could pull this off without a problem.

Opening night, we launched into “Purple Haze,” and I broke a string during the first solo. I then picked up my backup, and during the outro solo, I broke another string. I was down to my backup’s backup, my Schecter C-1 Elite, and played the remainder of the show with that guitar.

It was an exciting night and one that I’ll never forget. The tunes whizzed by one after the other, and before I knew it, we were playing the encore number, and it was over.

I can tell you the details about the show, but that’s a story for another time. I will share with you the topic of this month’s Trade Secrets. It’s how I prepared for the gig with so much music and so little time. 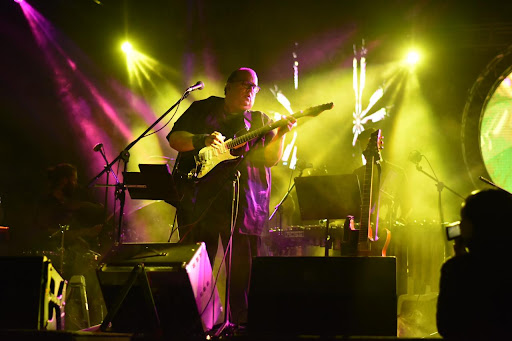 How I Learn Melodies, Riffs, Solos, and Single-Note Passages

As guitarists, we need to play single-note parts, chord riffs, and progressions. But for this installment, I’ll break down the concept I use to learn melodies, solos, and single-note phrases.

I’ve chosen the first four-bar phrase of Charlie Parker’s “Billie’s Bounce” to demonstrate this concept. But you can apply this concept to any melody, solo, riff, or single-note passage.

One of the main problems is that we want it to sound like the recording right away. But we need to work out technical issues first. So, we need to learn the notes and figure out the best place on the fretboard to play the phrase.

Also, we need to work out one motif or lick at a time. Let’s begin with Bar 1.

There are 3 places on the fretboard where you can play the opening phrase: 4th Position, 8th Position, or 11th Position.

The by-product of this type of practice is that we learn the fretboard, and we’re not stuck in one Position. Also, we understand the phrase that we’re working on from a musical standpoint—it’s not a lick anymore. Finally, memorization becomes easy because we’re thinking musically.

I look at this as what, where, and how. A three-step process.

It may seem like a lot of extra work at first. But it’s time well spent.

Lastly, always work with a metronome.

Thanks for reading, and till next time, practice smart and play from the heart.