Rather than imitating a plate or spring, the EarthQuaker Afterneath Otherworldly uses a sequence of short delays that cascade into each other in order to produce the reflections that are typically produced by reverb units.

Each of the delays stands in for each reverb reflection that’s decaying; in return, this creates a large space.

The EarthQuaker Afterneath Otherworldly offers several different controls. Some of these controls include:

A lot of the devices that EarthQuaker creates are famous from producing unique guitar effects; the Rainbow Machine, Organizer pedals, and the Bit Commander are just some of their most famous pieces.

The EarthQuaker Afterneath Otherwordly isn’t the typical reverb pedal; that most guitarists are used to playing with. I would not suggest that you purchase this pedal if you are just looking for a moderate echo, any sort of conventional sound, or a bit of a subtle ambience.

When I first got my hands on the EarthQuaker Afterneath Otherworldly Reverberation Pedal, I was a bit overwhelmed at the offering of six knobs. On the far right, there are two knobs. Knob number one allows the user to adjust the reverb tone from dark to bright. The dark to bright range has a consistently full sound. 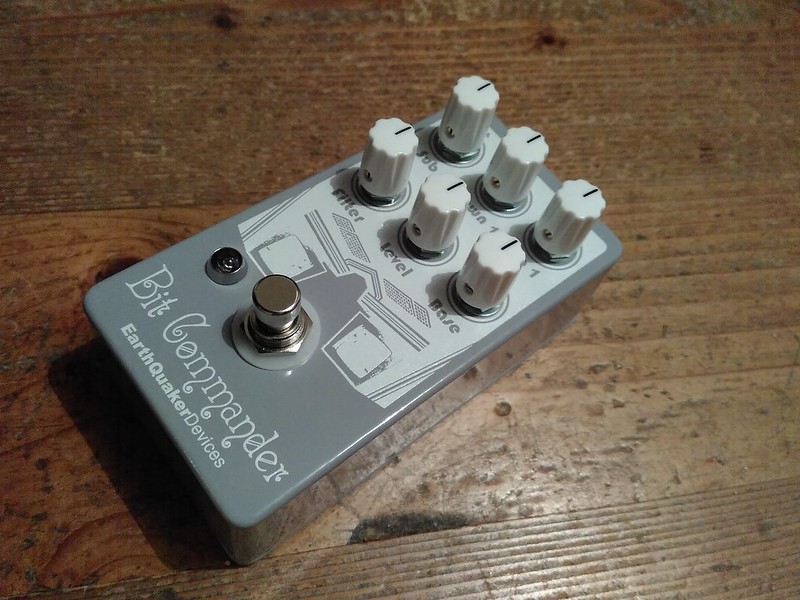 The second knob is the mix knob, which sets the amount of the wet reverb signal that is heard; this knob ranges from no reverb to a wet signal that sufficiently covers the dry sound without it actually being one hundred percent wet. In other words, it’s safe for you to turn the mix knob all of the way up or to keep at the 3 o’clock position and in turn you’ll have amazing results.

The reflect and the length knobs are also an important part of the pedal that you need to learn about, as they both are very interactive parts of the pedal. The length knobs determines the decay time of the reverb, which creates the overall length of the sounds that are heard. The longer that you have your length knob on, the more hall inspired reverb you’re going to receive.

On the other hand, the reflect knob increases the regeneration, which adds to the length of the reverb. If you have your reflect set too high, the pedal will self-oscillate. I personally suggest that if you have one knob set high, you keep the other knob low. However, it is a whole lot of fun to have both knobs turned up high and throw yourself into reverberating bliss.

The most enjoyable part of using the EarthQuaker Afterneath Otherwordly is that the drag knobs allows you to affect the reverb sound by changing the spacing between short delays.

You can change this knob to produce more of a rhythmic delay, a reverb ambience, or you can slowly turn the knob while it’s reverberating in order to produce a pitch with different reverberated sounds.

In case you’re not entirely sure what this would sound like, there are plenty of YouTube videos out there that can you show you this. If you have listened to this, it’s a completely different experience when you are playing.

It is most definitely easy to become overwhelmed by the massive reverb pedal; market that’s available; there are a countless number of reverb pedal available in every single style in the world. 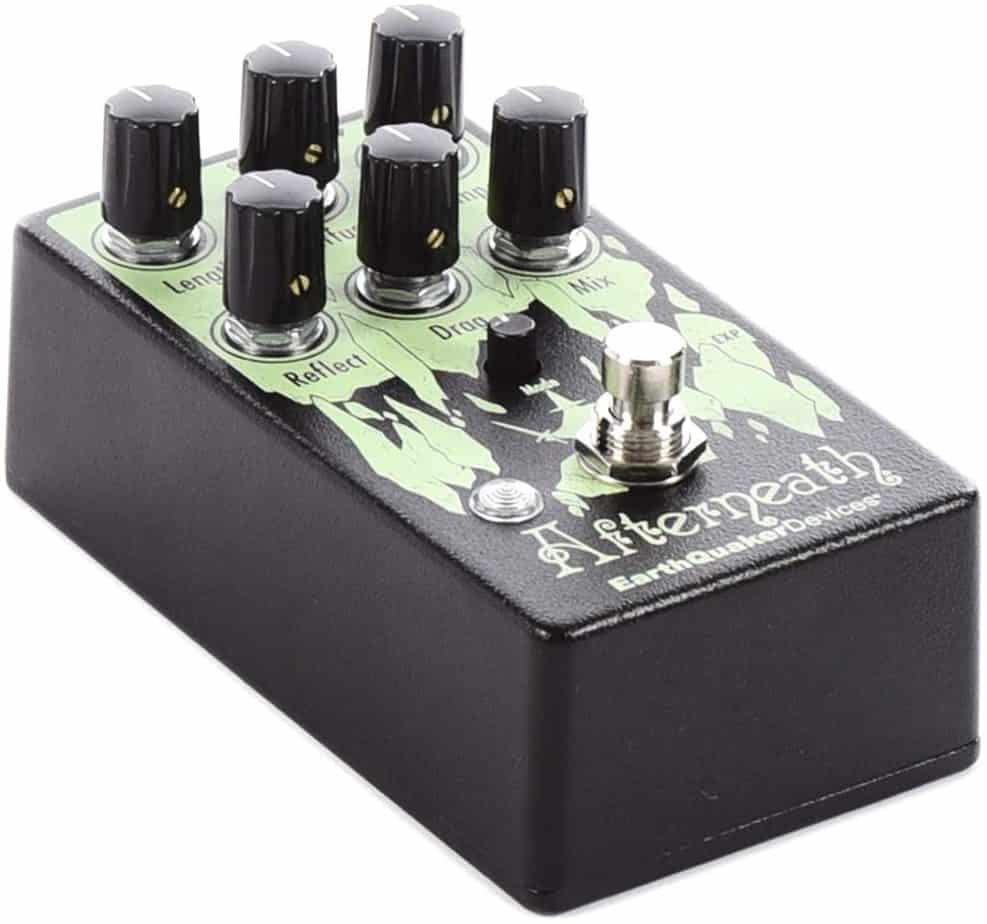 In order to know how to evaluate an reverb pedals’ quality to make sure that the reverb you’re looking at is the proper one for your needs, you need to understand what criteria is used to evaluate a reverb pedal’s quality.

This review of the EarthQuaker Afterneath Otherworldly Pedal will look at the following criteria:

Overall, the EarthQuaker Afterneath Otherwordly Devices is an affordable pedal that offers a whole new range of effects that differs from the Hall of Fame. This is a great pedal to bring along with you if you don’t want to drag a whole bunch of pedals with you; it offers a whole plethora of effects in just one pedal.

Who is the EarthQuaker Devices Afterneath Otherworldly Reverberation Pedal Best suited for?

I would not suggest the EarthQuaker Afterneath Otherwordly for any beginning guitarists. I would also not suggest this reverb machine to anyone who is traveling and only needs a machine that’s going to give them basic effects.

However, I would suggest this reverb machine to anyone who is looking to surpass their comfort zone and create. The EarthQuaker Afterneath is the perfect reverberation pedal to use if you are someone who plays with several different bands or groups and are looking for a pedal/ machine that will fit into a variety of styles, not one that only fits into one style.

Does the EarthQuaker Afterneath Otherworldly work as advertised?

Yes, it does! While I understand that $225 isn’t always affordable for musicians, I know from personal experience that it truly is a joy to play. I love using it to travel around with as a I play along with different bands that are in different genres. It’s a reverb pedal that you can truly customize your sound to.

Pros of the EarthQuaker Afterneath Otherworldly:

Other alternative reverb pedals to consider: 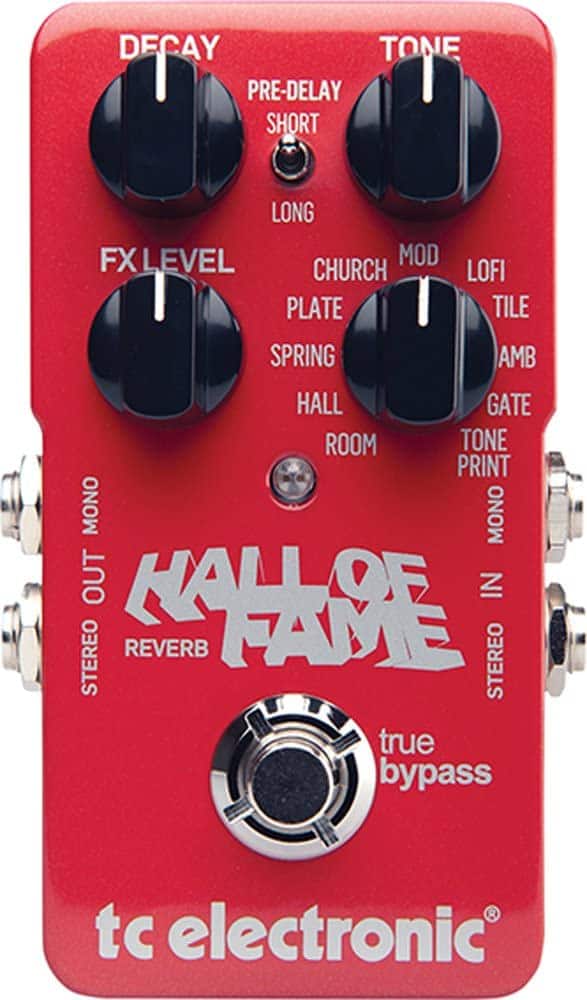 If you are interested in something that’s a little bit less complex to use, the TC Electronic Hall of Fame may be something that you’re interested. The basic setup of this reverb pedal is a pedal board friendly, compact, battery powered pedal that has been loaded up with new sounds; these new sounds are now called Tone Prints.

Each pedal has a small number of several sound variations that you can choose from; one of these variations being Tone Print. Tone Print allows you to download the settings that celebrity guitar players have designed and upload them to your pedal by using a mini USB cable or by using your smartphone.

You can use your smartphone by aiming the speakers on your phone to your pickups; this beams the data directly to the pedal. 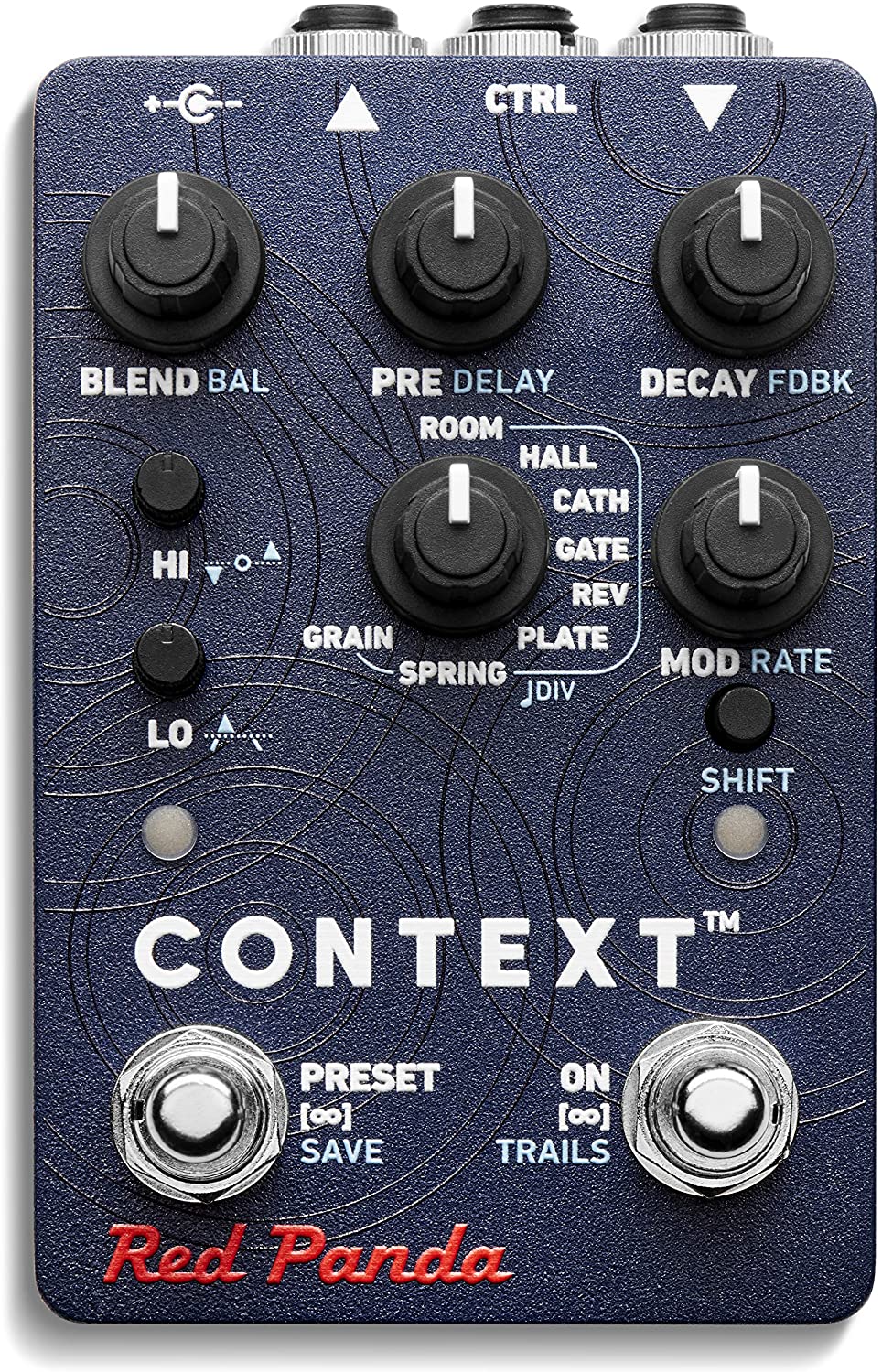 This reverb peal is one of the best reverb pedals for guitar players that are looking for a large ambience or just a subtle space for your guitar, especially if you are someone who is just plugging your guitar into a single amp or just using an effects loop.

The only complaint that I have about the Red Panda Context Reverb pedal is that it doesn’t come with an Expression pedal control to use over the Decay or Blend; this would have been nice to use to have an extra momentary foot-switch for the infinite Decay.

If you are someone who is bored with the limited possibilities of the Hall of Fame, the EarthQuaker Afterneath Otherwordly Reverberation Machine is a pedal that I honestly suggest to many of my students, co-workers, and friends.

I know as a guitar performer and teacher, I often get super bored with the common effects. Whenever I’m creating new music or working with a new band, I’m often looking to push myself past my comfort zone and create something new.

When I am looking for a traditional ambience, I usually stack over reverb pedals over the EarthQuaker Afterneath. While we talked about the functionality of this pedal, it’s truly how you use the pedal that makes it so exciting. This quickly became a huge component in my performances, as it provides my guitar is an entire playground of exploration.

The drag function that this pedal offers is what truly sets it apart from other alluring soundscape creating pedals. My only complaint about this pedal is that you have to have an internal PCB (schematic design) in order to accommodate this pedal.

However, there are so many other benefits that this pedal has to offer, that that negative really is nothing when looking at the whole aspect of the pedal.