Caparison are a Japanese guitar brand, founded in 1995 by former employees from Jackson/Charvel’s design division there.

They may not be a very well-known brand, but users include Phil Campbell from Motörhead, as well as both Adam Dutkiewicz and Joel Stroetzel from Killswitch Engage.

Rather than just rehashing designs from their former employers, Caparison focus on high-end, handmade instruments, that develop standard guitar design and bring it to new places.

Not afraid of seven-strings, the TAT Special isn’t the only one they produce, but it’s certainly the highest end one. Let’s take a look at its parts, construction, and sounds. 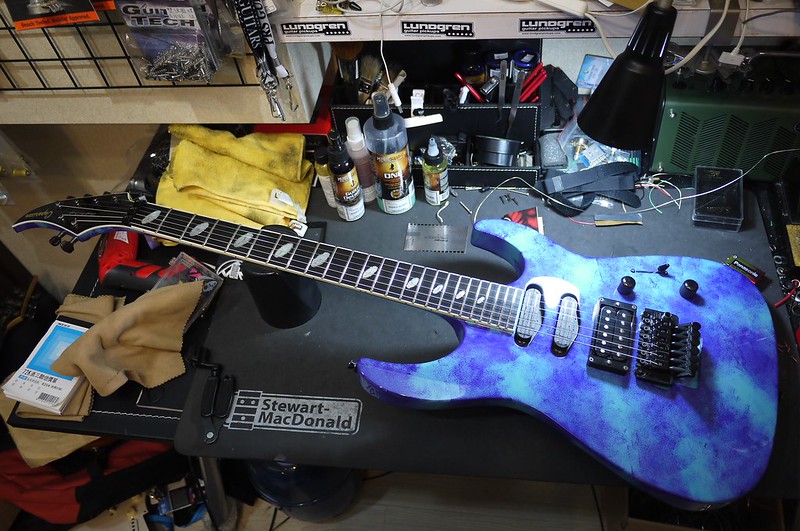 A guitar at this price really does need to be the best of the best, and the TAT Special’s specs don’t disappoint.

The thing that most likely stands out the most in that list of specs is the 27 frets. Unusual, right?

The mahogany/maple top combo is what you’d expect. It’s clear that Caparison are going for quality of materials, rather than quantity of gimmicks with this instrument.

Given the Superstrat shape, it’s easy to say this will appeal to shredding metallers.

However, its materials and pickups suggest there might be a little more to this guitar. And it’s not even black.

The 27 frets and versatility of the pickup selector, also point towards something beyond high gain shredding. Perhaps a better description of its market might be for experimental metal and prog players.

I can see the big appeal to prog rock players – this guitar is shaping up to offer a wide range of tones. This appears to be designed to be heard as an instrument, rather than a tool for demonstrating technical prowess.

There certainly doesn’t seem anything to fault in terms of the parts used on the TAT Special.

I’m looking at the natural matt finished model, and there’s no disguising the beauty of the flamed maple finish. From the side of the body, you can see it’s a good thick slab of maple too – none of the veneer maple “top” that you get on cheaper instruments.

It’s also lovely to see that maple/walnut neck go right the way through the body. It really highlights that this instrument is in a different league to the bolt-on construction, which is more popular with seven-string guitars.

The pickup circuitry is interesting, involving two coil tapped humbuckers, a three-way pickup selector, an additional rotary knob for fiddling with the pickup variations, and a single volume knob. The neck humbucker is angled – itself a relatively unusual feature.

A Floyd Rose tremolo and some black Gotoh machineheads round off the components of this guitar – but how are they all put together?

It’s as well to start with the most intricate part of the TAT Special’s construction, and that’s the inlays on the ebony fingerboard. This is so far removed from dots!

The inlays are elliptical in shape. Closer inspection shows that they are in fact designed to be italicized “o” shaped, and each marker is actually a clock, where the time on the clock matches the number of the fret.

For example, the inlay on the first fret is at one o’clock; the third fret is at three o’clock, and so on. This is the kind of detail that other websites would put in a listicle entitled “5 Insane Details That Went Into A Guitar.”

Getting over that excitement, the guitar is constructed to the standard you’d expect for this amount of money. The neck joint is flawless; the binding on the fingerboard keeps the frets tidy; the machineheads feel very solid – there won’t be much retuning here.

There are no dings or blemishes, and everything seems solidly attached where it should be. The headstock has an unusual shape, which may not hit the aesthetic appeal for everybody.

It’s as well to get this plugged into a 100-watt valve head, paired with a half stack cab.

On the amp’s clean channel to start with, the EQ settings had the bass at four, and the middle and treble each at six.

Running through some open chords, there was a shimmering brightness, clearly defined by the high-quality mahogany, but balanced by the warmth of that carve maple top. It was bright and sweet. It would lend itself well to quieter moments of an epic prog rock track.

Moving over to some overdriven sounds, before switching into proper rock mode, I gently eased the gain up until it was barely breaking – somewhere between one and two on the amp. You couldn’t help but feel there might be some experimental blues somewhere in this guitar…

Moving the gain dial up to six, and it’s full-fat rock and roll territory.

With the TAT Special’s rotary switch involved, it’s actually possible to get six variations out of those two pickups. Understandably, if you have a prog rock track with a multitude of different parts in one track, this could be a big appeal.

I wouldn’t get paid for the word count required to go through each setting in detail, but they’re actually a little predictable: brighter and more treble oriented towards that Floyd Rose; and more dense sounding thickness along that angled neck pickup.

But giving each setting a quick once over did reveal that earlier predictions of the TAT Special lending itself well to the wide range of tones for prog, were pretty much on the money. If you’re looking for classic rock tones with the capacity to go in all manner of sonic directions from there, you could be on to a winner.

The TAT Special is very much the kind of guitar you could happily play for hours, mainly because it would take you many hours to properly get into the range of tones it has available!

It’s a fairly thin guitar, and as the maple is flat – essentially a slab of maple with contoured edges – rather than a carved top of other guitars, the weight couldn’t be described as light, but certainly as comfortable.

Perhaps it’s best to think of it like this: if you’re 100% certain that you need it, and that’s it’s going to completely revolutionize the way you play guitar, and you’ll use it all the time, then absolutely great feature, and great to know it’s there.

If it’s not an essential part of what you’re doing, you might ask yourself if it’s actually worth the extra dollars of a premium guitar.

In saying that, when you do venture up to those higher frets, they are very accessible and comfortable to reach.

Alternatives at this price level are few and far between. Even those stalwarts of seven-string, Ibanez, tapped out about a grand ago.

The few competitors are all signature models. I haven’t decided if that means that the few dollars making them expensive enough to be here are caused by the player associated with them.

The Misha Mansoor Juggernaut HT7 from Jackson is made in the USA and inspired by their Dinky range, this comes in classic Superstrat styling, with scalloped horns for reaching its meager 24 frets.

This has a lovely light alder body and a maple top. Its two Bareknuckle pickups are hooked up to a five-way selector, with push/pull functionality on the volume and tone knob for coil tapping shenanigans. The deal is sealed with an ebony fingerboard. 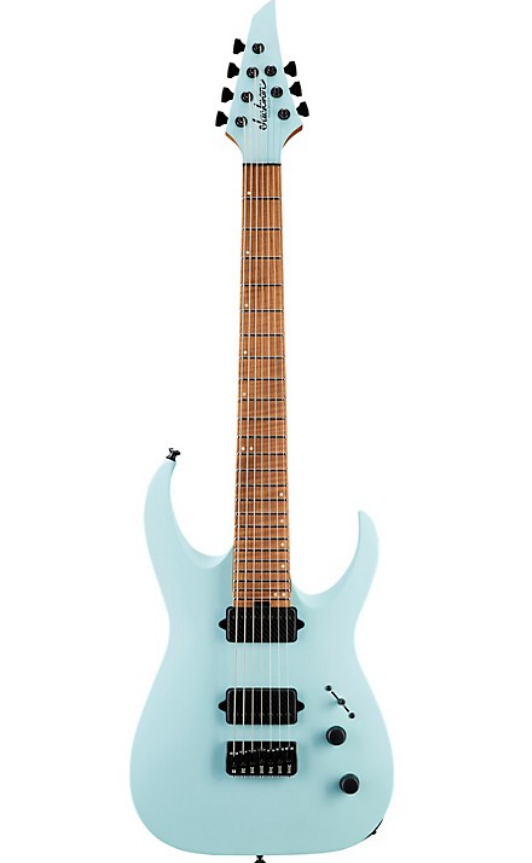 ESP offer a baritone seven-string, designed with Stephen Carpenter from The Deftones. It’s a bit of an odd beast. To start with, it’s shaped like a Telecaster, rather than the standard Superstrat. The body is made of alder, and the neck is maple, paired with an ebony fingerboard.

With its 27 inch scale, this baritone guitar is definitely one for the lows. It’s loaded with Carpenter’s own signature Fishman Fluence active pickups. These are connected to a standard three-way selector, and a control each for volume and tone.

This Rusty Cooley signature model from Dean is very fancy. With an alder body and maple top, Cooley himself has dubbed it “The Lamborghini of seven-strings.”

An interesting point is the use of Dean’s own DMT humbuckers, rather than Cooley’s signature EMGs. Those will be two very different pickups. The humbuckers are standard, with the neck one angled, like in the Caparison. It has a rosewood fingerboard – other guitars at this price have an ebony one.

This is such a great guitar and definitely recommended for prog rock players looking to push some boundaries, while retaining a well-defined guitar sound. That’s largely to do with the quality of the materials used.

Obviously, the cost makes it somewhat prohibitive. As with any guitar of this price, they don’t really lose value, and if you can afford it as an investment piece, it would be worth considering.

The TAT Special is the sort of guitar you could own for years and can still find new directions to take it.